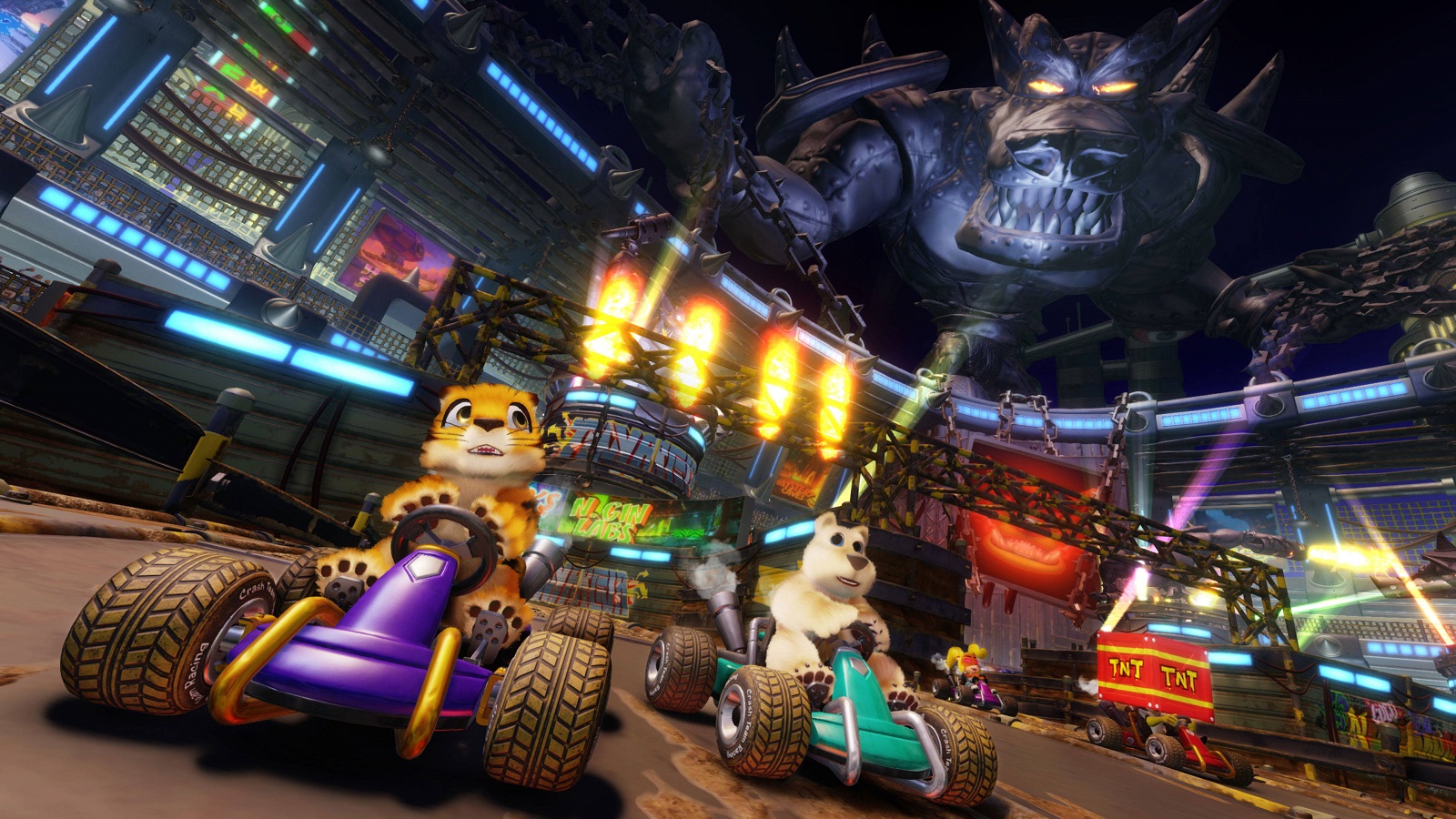 With Crash Bandicoot and Spyro getting excellent remastered trilogies these past couple of years, we’re in a renaissance of mascot-based gaming. Ever since the release of the N. Sane Trilogy, fans have wondered if Crash Team Racing would get a remastered version as well. Fear not, as Activision and developer Beenox has given this to us in the form of Crash Team Racing: Nitro-Fueled. Featuring a vibrant aesthetic and jam-packed with additional content, this is one remaster that no Crash fan should miss. 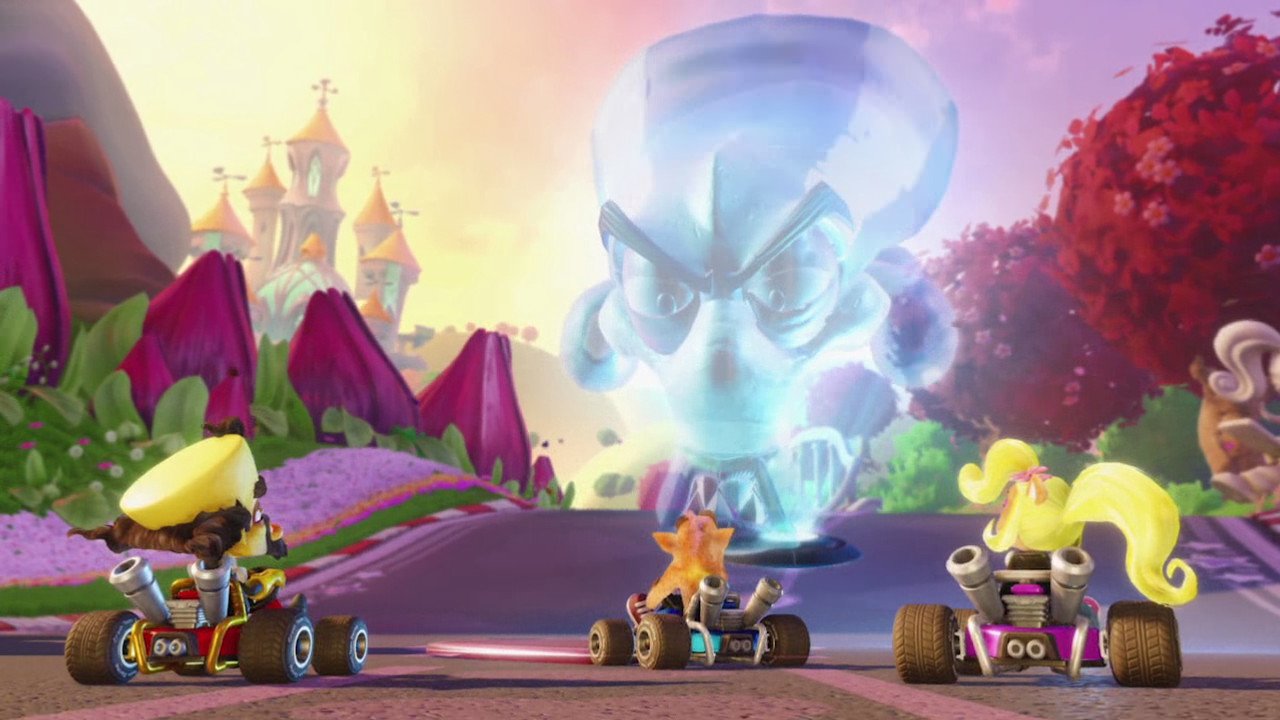 Like the 1999 original, Crash Team Racing: Nitro-Fueled features the kooky Crash Bandicoot as he and a motley crew of friends and enemies work together to stop the nefarious Nitros Oxide from taking over the world. The alien challenges earth’s mightiest… er, fastest racers to a race, and if they lose, he gets to take them as his minions. (Not the best tradeoff, if you ask me.) Due to this, players will have to earn trophies and best a variety of different bosses and racetracks in order to be worthy enough to challenge Oxide.

Oddly enough, this isn’t the first mascot-based racing game this year with the word “Team” in the title, and unlike Team Sonic Racing, it’s actually a free-for-all in terms of racing. You’ll have to compete in eight-player races in over 30 tracks as you speed, drift, and use items to take first place from your opponents. Like in games like Mario Kart, you can drift and get speed boosts; unlike Mario Kart, however, you can do this up to three times continuously, getting a little faster with each successive boost.

Drifting is key in Nitro-Fueled, as there are tons of different hazards to avoid and shortcuts to take. While you have your standard Crash-themed items (a TNT crate that can slow down opponents or a speed boost item), you can also upgrade your items and kart’s speed by grabbing 10 Wumpa fruit scattered around the track, either standalone or in boxes. These upgrades can drastically affect your item effectiveness, and there’s a good strategy in trying to get enough fruit versus powering through the finish line to be first. 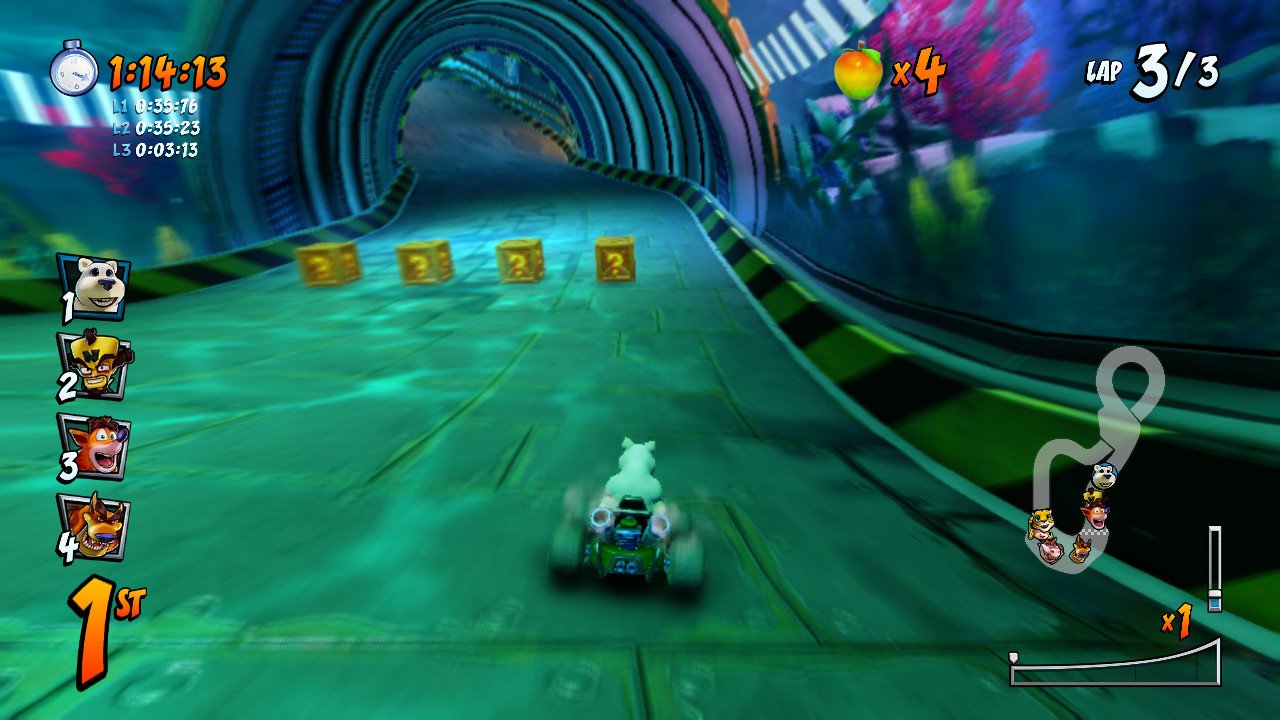 The single-player adventure mode is recreated perfectly here, with all 18 original tracks available to play in the hub world of this mode, which is separated into a bunch of mini worlds. While it’s rather linear in the beginning, after you get first place in a world (thus obtaining a trophy), you unlock the opportunity to best the world’s boss in a race. Do this, and you can get a key as well as open up different race types to get even more collectibles. This structure makes for a fun approach to unlocking and obtaining collectibles; should you want to speed through and challenge Oxide immediately, you can do that (though you’ll have to challenge him twice anyways). If you want to take your time and do the different race types, you may as well.
Aside from standard three-lap races, there are also CTR challenges and Relic Races (which are both necessary for endgame content). In the former, you have to win the race as well as collecting the letters CTR; some of these are in some pretty obtuse locations, so you’ll sometimes you need to take one attempt just looking for them. Relic Races are the more interesting of the two, where it’s a time trial version of the track, with a required time you need to beat in order to obtain a Relic. You’ll collect crates that freeze the clock, and doing so means you’ll have more time to get to the finish line. These challenges are tough and should remind nostalgic gamers of how monstrous some of the objectives were.

Speaking of difficulty, the new adventure mode finally has selectable difficulties, though you can elect to do classic mode if you’d like. The latter is a little more rigid with its layout, as you cannot switch out your character once you select them and you cannot customize your vehicle at all. I do enjoy the option to do either approach, though I did select the Nitro-Fueled adventure mode just due to the fact that each character is weak to some of the layout of the courses, and switching on the fly helps mitigate this issue. On the character select screen, you can also separate character stats by beginner, intermediate, and expert, which is very helpful when deciding who to play as. Personally, I did use beginner characters for the first world but ended up sticking with Crash or Cortex for the rest of the campaign, as their midrange stats across the board were the most versatile in almost every scenario I faced. 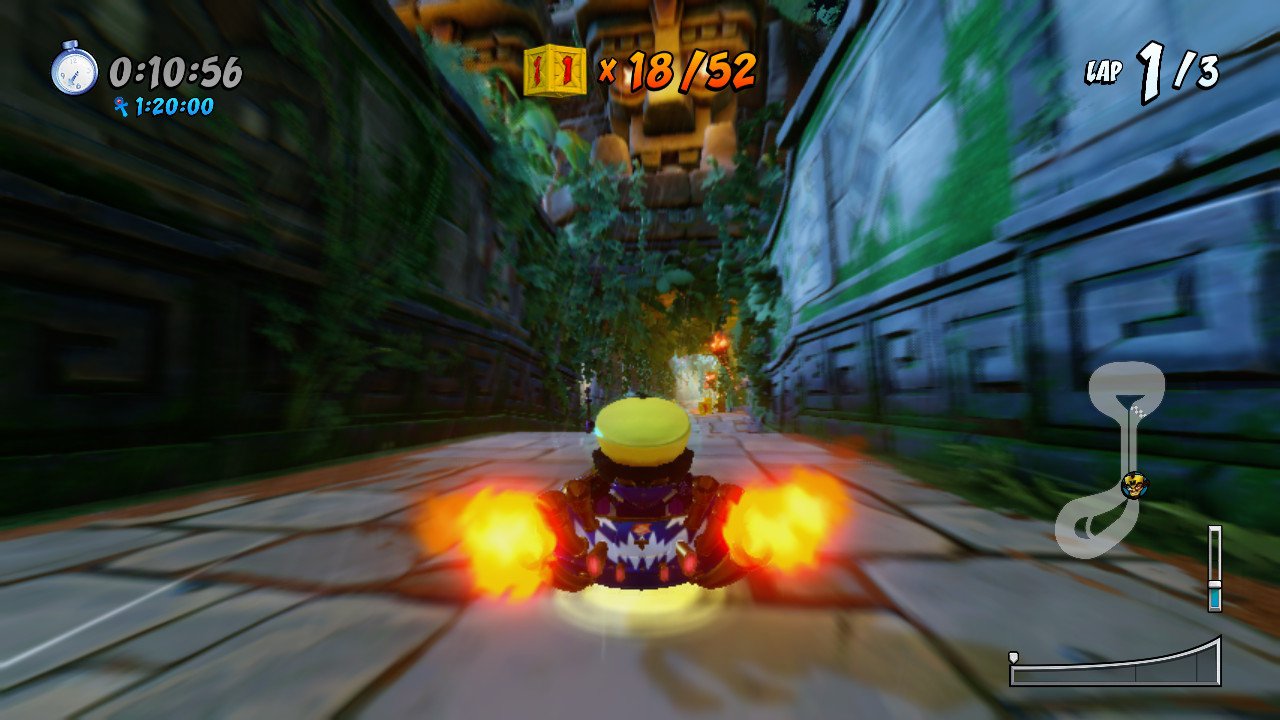 While midgame and endgame tracks are tough but mostly fair, there was a good amount of rubberbanding AI. This is noticeable enough to be unfairly frustrating in later tracks, especially when the characters that are overpowering you normally shouldn’t. Mystery Caves was one such example, where I would get overtaken easily by Pura or Polar, even though they normally have absurdly pitiful top speed. The terrain also doesn’t lend itself well to drifting, so I was stuck on this track a few times before I ended up switching to Crash and barely getting first place. Due to how handling works, controls for drifting are ironically a bit inaccurate for the characters who have excellent handling. Coming from something like Mario Kart, there was a weird delay with locking the character into a turn, and oftentimes it meant that I would spin out or just not do a drift, wasting precious seconds and having opponents overtake me. This is less apparent for expert characters (whose drifting abilities fit more in line with Mario Kart, albeit more inaccurate), so I just wish this issue could be rectified later. 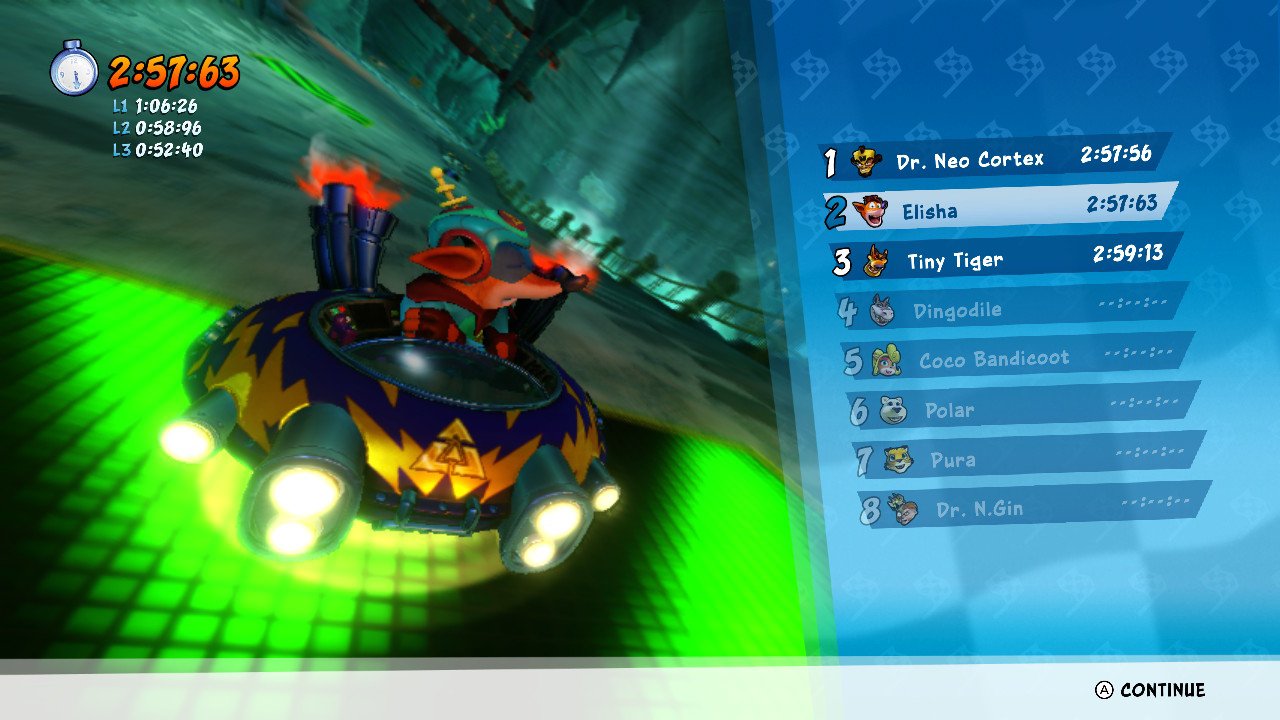 Press F to pay respects to this AI.

There were some instances where I would get pummeled by a barrage of missiles, bombs and an errant beaker, hurtling me from second to last place. It doesn’t help that should you lag behind in the middle of the race, it’s all but unwinnable in some instances. This did encourage me to practice utilizing shortcuts and exploiting powered-up items, but some tracks had a weird learning curve to master. It doesn’t help that these races are divided into themes rather than difficulty, which means that there was usually one track in each world that was trickier than the others, and normally it was the second or third one. Oddly enough, while rubberbanding AI is present in boss battles, they aren’t as pronounced since you’re in a one-on-one race. These races (with bosses hurling items at you constantly) are a fun and challenging way to cap off each world, and the cutscenes that are associated with them give a little more lore to the Crash Team Racing experience.

All in all, however, the track designs are gorgeous and everything looks utterly beautiful. The Switch version of the game is admittedly a step down from the other console versions, but it still runs flawlessly in handheld mode. The same aesthetic used in 2017’s N. Sane Trilogy is used here, and it does look pretty colorful. Each location is pretty cool to look at and they may elicit some nostalgic memories for fans of the original. From the first laps of Crash Cove to the lofty heights of Hot Air Skyway, there’s something for everyone here. You can also choose to use the remastered or original soundtracks for the races, something that is a nice touch for retro purists. The character models are fittingly exaggerated and unique (even Fake Crash, a literal Crash doppelganger), and it gives me a Wacky Races vibe. Each character has a pretty quirky personality, and while it’s only shown briefly in some cinematic cutscenes, I really appreciate how fleshed out they could be in such a short amount of time. As a side note, I absolutely love Ripper Roo and Coco’s remastered designs.

While Crash Team Racing: Nitro-Fueled does fumble with inconsistent difficulty, it makes up for that with the sheer amount of content provided. Aside from including the adventure mode and all the tracks of the first game, Beenox has also done the pleasure of including most of the tracks and karts from Crash Nitro Kart as well, and even some characters from Crash Tag Team Racing. This means you’re essentially getting a remaster of two games’ worth of content, with even more planned on the way in the form of seasonal events. (We’re even getting Spyro in the game soon, can you believe it?) I didn’t even talk about the wide variety of Battle tracks exclusive to the battle multiplayer modes of the game, where you can duke it out on tons of different maps in things like last person standing or capture the flag. Really, the only thing stopping you from breaking this out at a party is probably the limitation that you can only have two players while in handheld mode, though four players on a TV is fine. 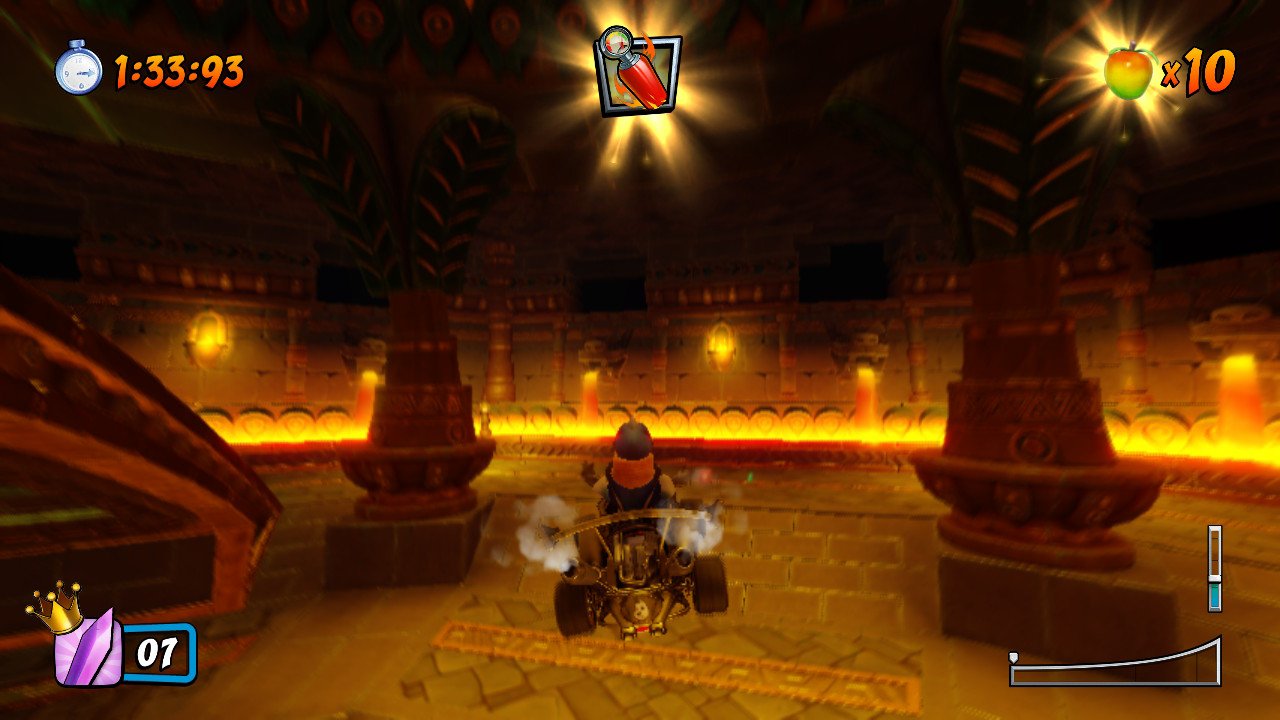 While tracks are available as soon as you fire up the game, there are also skins, characters and customization parts you can unlock through the in-game Pit Stop. Before you ask, I didn’t see any microtransactions here, and you can unlock everything through the in-game currency Wumpa coins, which you’ll earn by racing. An odd thing to note is that in order to obtain them, you’ll have to connect to online servers in the background; if you aren’t connected (say, due to a plane ride or car trip), you won’t be able to earn any coins. This is a somewhat odd feature, but since almost everything meaningful can be unlocked in the adventure mode or through local race features, this isn’t too big of an issue.

Crash Team Racing: Nitro-Fueled has the thrilling speed and the addictive gameplay of the original and adds a metric ton of extra content for fans and newcomers to enjoy. Whether you’re new to the frantic frenzy of Crash Team Racing or you’ve been hankering for a chance to play as Nitros Oxide himself, there’s a whole lot of things to love

Elisha Deogracias is an aspiring accountant by day, freelance writer by night. Before writing for Gaming Trend, he had a small gig on the now defunct Examiner. When not being a third wheel with his best friends on dates or yearning for some closure on Pushing Daisies, he's busy catching up on shonen manga and wacky rhythm games. Mains R.O.B. in Smash. Still doesn't know if he's a kid or a squid.
Related Articles: Crash Team Racing Nitro-Fueled
Share
Tweet
Share
Submit