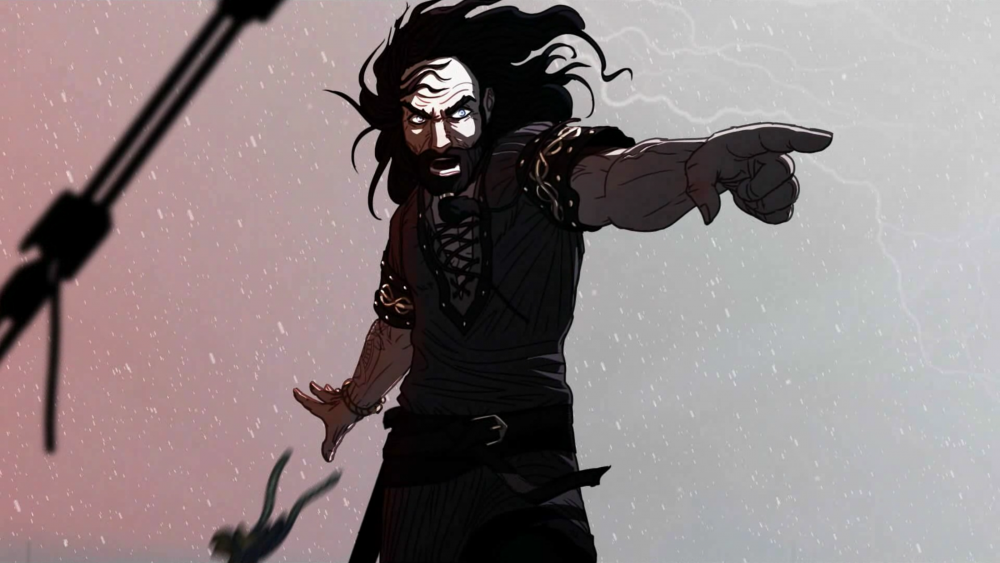 Strategy. Survival. Vikings. Sounds like a recipe for a good time, right? Sadly, while Dead in Vinland did have some fun moments, the repetitive gameplay, slow-moving plot, and lack of progression left me wanting.

In Dead in Vinland, you play as a Viking family who has been run out of town. Why? Unfortunately, there’s a good chance you’ll never find out. Your family washes up on an island and is set to start a new life, but a big bad bully named Björn runs things on this island and has made it his goal to make your family miserable. From here on, it’s up to your family to colonize the island, save everyone from Björn, and live happily ever after.

The writing in this game was definitely fun, with consistently entertaining banter from the family members— especially between Moira (the feisty sister accused of being a witch) and Kari (the petulant daughter). Information about Norse, Christian, and African cultures (to name a few) are explored in the evening conversations, and there are even childhood crushes to be enjoyed along the way. Some of the pop culture references (for example, a Rolling Stones lyric in the opening cutscene) felt out of place, but overall the jokes were amusing. However, what I really wanted to know—why the family had been run from their home—took way too long to come out. It wasn’t until nearly five hours in that I even got the name of the person who attacked the family in their home, with no motive having been hinted at yet. I’m not sure if this is a symptom of having so many simultaneous plots, but it felt entirely unsatisfying. I consistently found myself wishing this were simply a shorter game.

In terms of gameplay, Dead in Vinland is a survival meets RPS game that is completely turn-based. You give your settlers tasks to complete, and once you’re ready, you hit the “Next” button in the bottom right corner of the screen to set them on their way. Their hunger, injury, and depression levels will grow over time based on the duties you assign them. If any of these levels hit 100, the characters will die and it’s GAME OVER (I lost my first game due to Moira killing herself after becoming too depressed). As you explore, you’ll also come across groups of thugs who will attack you on sight, turning the game into a turn-based battlefield temporarily. In addition, there are some puzzles that you’ll discover in your journey—from trying to find the right combination of words to awaken a goddess to deciding whether to open or bury a treasure chest. These activities are fun at first, but the game eventually becomes exhausting through all of the repetition.

At first glance, Dead in Vinland seems to be very unforgiving with mistakes. While a small alert in the form of an exclamation mark will show up if you don’t have enough water to explore or if you forget to set a craft recipe, it will not prevent you from hitting the “Next” button to continue the game. Multiple times I found myself making simple mistakes, and unable to go back. Luckily, I figured out that I could exit out of the game and easily retrieve a save file from the previous in-game day before if I forgot to stoke the fire before the end of the day, as the game keeps multiple save files for you just in case. This reduced a lot of my frustration and saved the Viking family a couple of times.

As someone who started this game three times, I can guarantee you that the replayability of this game is very low. As I repeated scenes and conversations, I grew sick of constantly clicking to speed through the same jokes and plot points. While the game offers a “Quick Start” mode to skip the majority of the intro proceedings, you still have to click through every long nightly conversation—only some of which let you actively participate.

The drawn 2D graphics are well done and fit the tone of the game well. I particularly enjoyed Moira’s design, with her scene-kid haircut that I definitely had in 2008. Each character has a distinct personality through their design, and some of the landscapes and features within are beautiful. However, the interface in this game has some serious flaws. Simple details like scroll bars were difficult to discover, as at first glance they appear to simply be decorative borders. These interface issues made for some incredibly frustrating gameplay along the way.

There were unfortunately some bugs when I played, but they were minimal for the most part and they did not interfere with gameplay. Despite this, it was still mildly annoying every time a character was referred to by the wrong name or a head was cut off during an animation.

I don’t regret the hours I spent playing this game, but it will be a while before I return—if I ever do. I enjoyed getting to know this family through their trials and tribulations, and I applaud the work that CCCP put into this game, but Dead in Vinland is a great example of how sometimes simpler would be better.

Dead in Vinland is a challenging game with fun writing and hours of gameplay to keep you busy. However, repetitive gameplay and a slow-moving plot holds back what could have been a truly fantastic game.

Born and raised in Los Angeles, Maddy has been addicted to video games since watching her dad play The Secret of Monkey Island when she was 5 years old (though it took her another 14 years to finish the game). In addition to playing video games, she's a proud cat mom, a lover of bad jokes and dark eyeliner, and a terror on the dodgeball court. Maddy is currently pursuing her MBA at UCLA Anderson and starting in June, she will be interning at Riot Games with the Player Growth department.
Related Articles: Dead in Vinland, Indies
Share
Tweet
Share
Submit