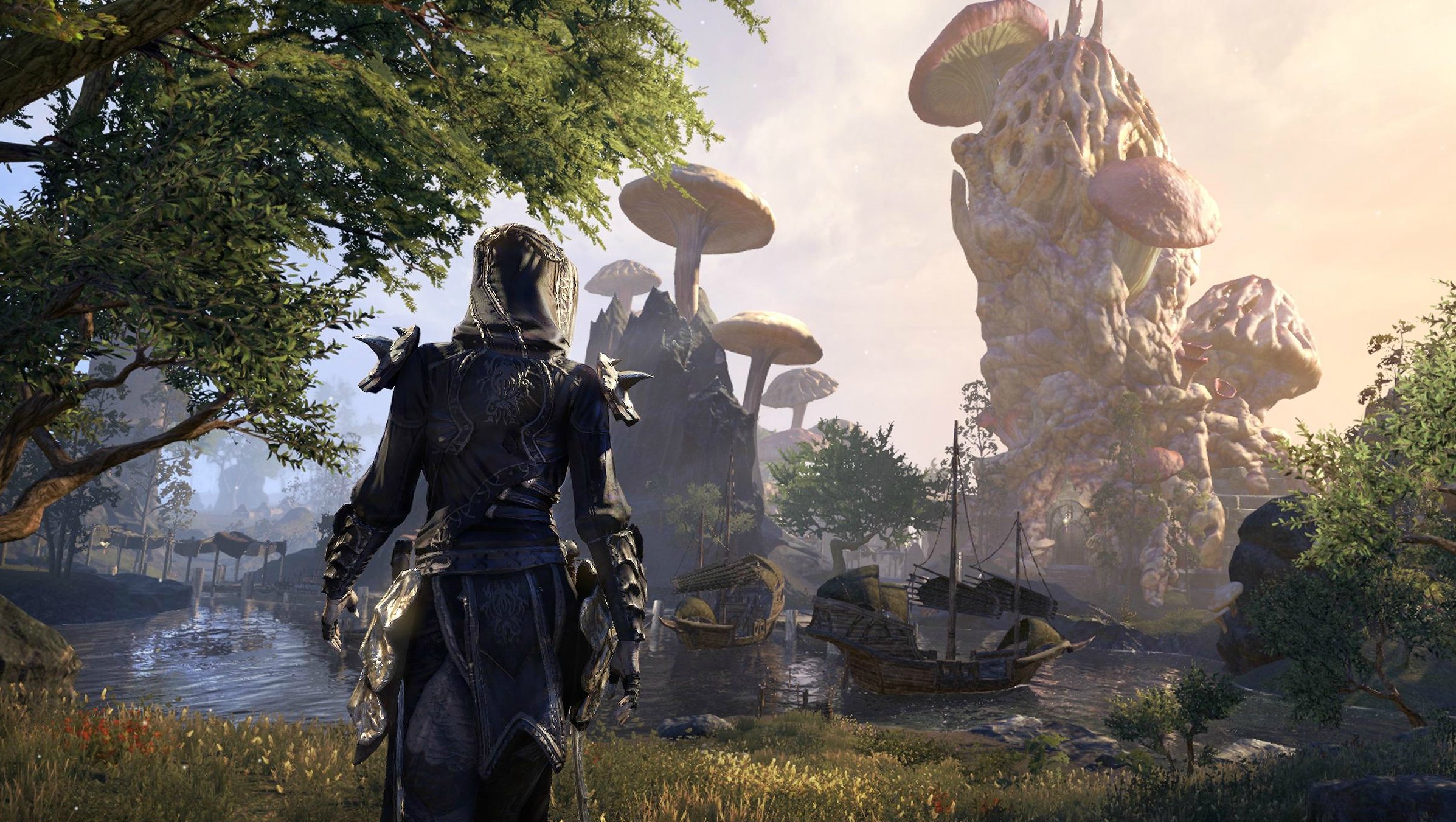 Vvardenfell is a place like no other. Dense, steamy swamps welcome adventurers in the south, leading them inland towards lush grasslands, misty isles, barren and scorched valleys, and the great peak of the Red Mountain, ever churning with dark omens from above. Mushrooms taller than skyscrapers dot landscapes to the east, while wood and stone marvels of engineering are being constructed in the marshy coastal lands to the south.

However, Vvardenfell’s unique and diverse ecosystems constitute just the surface of what makes the world of The Elder Scrolls III: Morrowind so significantly memorable and endearing to fans over the 15 years it has been with us. After all this time, and some speculation that led nowhere in past titles, Bethesda has finally opened Vvardenfell up for business via The Elder Scrolls Online: Morrowind. Does it ring true to a die hard fan of the original, and is it the experience we’ve been waiting for all this time?

Using the 700 year story gap to make familiar places both insanely true to memory while fresh and exciting again, the team at Bethesda has crafted, once more, a Vvardenfell that demands my time and devotion.

The opening storyline has you traveling to Vvardenfell via ship, when an enemy ambush interrupts your travels. You find yourself enslaved and on the way to servitude when dark elf woman appears and changes your fate. Through a series of events you make your way to the island, where you are beaconed by none other than living God Vivec for a job of utmost importance.

There is a ton of content to wade through, and this definitely does not feel like a lowly add-on, instead acting as a true expansion of the game proper. You’ll have many hours of exploration and questing to do. The game also features a 4x4x4 arena that provides countless hours of grinding and worth proving, and a new 12-man trial that takes place in the newly acquired tower of Divayth Fyr.

The add-ons are appreciated, especially the new arena option for multiplayer. It gives players a chance to get in, battle, and get back out without spending the long travel times and risking ambush in Cyrodiil. However, they could have come along with any expansion, and with this particular edition it is paramount that the world and atmosphere be captured. The added arena mode and the trial are just cherries on top.

The look of Vvardenfell is spot on. The trees, the grass, the marshes, and the mushrooms everywhere feel familiar in all the right ways. Architecture and building placement in towns are mostly reminiscent of the original, with the differences explained via time or other measures. No area is just simply a reskin. Vivec City, one of the most spectacular video game cities you’ll ever come across in the original, is (literally) a stripped down version that is “under construction.” I hated that concept at first, and do wish the full city were explorable. I also found it was very cool to see the construction process going on, and getting a feel for the true-to-life, workers with soil on their hands collectively building something that will be legendary in the future of their timeline.

The differences in gameplay between the original Morrowind and Elder Scrolls Online are paramount. The original game was full of things you could do : You could take anything, strike down anyone, and ruin relationships with people and guilds forever. Actions had consequences, and you always had to weigh what you wanted against what may happen.

In ESO, all actions are basically scripted. Any interactions outside of this scripting are more or less arcade games, where those you kill simply return and the things you do only have negligible consequences. This is not something new, and isn’t too much of a problem. However, the difference is incredibly visible when back in Vvardenfell, a place once a beacon of player freedom.

There will always be limitations on the Elder Scrolls Online experience that keep it from the depth of freedom provided in the single player Elder Scrolls games. The original Morrowind provided quests through guilds, but also had long quest lines that would have you working for someone over a long stretch until completion. That feeling of “apprenticeship” or “liege hood” is lost in the purely mercenarial nature of quest giving in ESO: Morrowind. The caves, delves, ruins, and shrines of the original Morrowind were filled with named enemies of varying difficulty and style. The same places in the ESO: Morrowind are filled with generic enemies and a predictably placed boss at the end, like always.

Those things though are just comparisons to the past, and they aren’t fair to apply to this iteration of the game. I found myself thinking all these negative thoughts from time to time about the game that were really just observations of the same game I had been playing all these years happily. Because the game was not suddenly an entirely different game, I felt short changed in some backwards manner. Once I got over the fact that this was not going to be anything like the original gameplay experience, I started to see the game in a different light.

For one, the map is incredibly true to the original and it can be jarring at first, unless you’ve tinkered some with the original game. Bethesda used the same height map to create this section of ESO, and that is very evident even if it may not be to perfect scale.

You are able to see Vivec City from the entry town of Seyda Neen, which was impossible in the original Morrowind due to a heavy fog filter that created depth perception issues, combined with low character speed that makes the world seem so much larger than it was. However, removing the fog from the original via modification shows the map for what it is, and just as in ESO, you are able to see Vivec City plainly from Seyda Neen.

While the map is roughly the same size, there are fewer towns, landmarks, and other areas to explore. Most of the small coastal towns are completely unformed, and villages in the northwest and northeast are drastically culled in numbers as well. The rough islands at the very north of Vvardenfell seem to be unreachable, but I may simply have not found the entry way at this time.

The expansion introduces a new class, the nature friendly Warden, to ESO. A sort of amalgamation of a templar, focused on healing and taking damage, and a sorcerer, focused on damage, the Warden allows you to take the character in any direction that you want without much stress. The character seems to fit with most weapon or armor types, depending on your play style, and has a great selection of new attacks.

From commanding a swooping cliff racer to attack your enemy (both an effective attack and homage) to keeping a bear companion with you at all times, nature fights with you as the Warden, and I have had the most fun with the available attacks here of all available classes, and love the bear companion above all other available summoned pets.

The Elder Scrolls Online: Morrowind is a dream come true for many diehard Vvardenfell fans, and does an admirable job in presenting something new and fresh in a way that also makes sure to pay homage to the past. The game expands ESO to include a new 4x4x4 arena mode, and offers hours of new content to enjoy. Any players who are already enjoying Elder Scrolls Online should be expanding, and any fans of the original Morrowind who have held out on ESO may want to consider giving it a try now.

Patrick Rost has been with Gaming Trend since 2013. At first focused on sports coverage, Patrick has gone on to cover a wide range of games and other products for the website. Outside of Gaming Trend, Patrick writes and records music, grinds perpetually in Elder Scrolls Online (PS4), and lives day to day with his two dogs, Bob and Stella.
Related Articles: The Elder Scrolls Online: Morrowind
Share
Tweet
Share
Submit