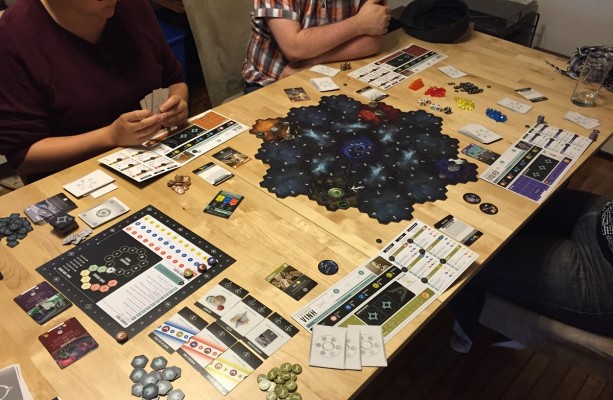 I gazed at the main view screen and let it all wash over me. There it was. A world unglimpsed by humanity. A destination that even fifty years ago was the stuff of fiction. And now me, seeing the glory of the untouched planet with my own eyes. The scientific potential alone was staggering. Even if it proved a desolate rock, I could think of five top geologists who would give their right arm for an hour on the surface. And if it wasn’t desolate—I could barely imagine.

“This is what we’re all here for, crew,” I said. “An uncharted alien world. Can you imagine what we might find?”

They stared at me, blank and silent.

“Uh…captain?” asked my valiant Lt. Commander Hand. “What exactly are you talking about?”

“You must be excited to see what discoveries await us!”

“Not really,” Hand said. “It’s a planet. Takes at least six points of red squares to take control of it. We take damage if we have less than nine points, though. Gives you three victory points, a reward roll, lets you repair. You know…a planet.”

In my confusion, I looked at the rest of my bridge crew. All were nodding in agreement. Their faces betrayed some mild concern for my ignorance.

“Are you telling me you’re not excited to discover this planet, Lt. Commander Hand?”

“But…I thought it would be cool to survey an unknown world! It could be teeming with who knows what kind of treasures!”

An ensign began to quietly weep. Hand put his arm around me.

“Captain, I don’t think you’re well. It’s a planet. We all know what planets do. Come on, let’s get you to your quarters. Lie down and let me handle the planet. I’ll let you know if anything exciting happens, but, uh, it won’t.”

Emergence Event by Kenny Sims is a two-to-four player space exploration game where your hand of cards tells you exactly what you are capable of, freeing the game from those tiresome concepts of “uncertainty” and “surprise” and “meaningful decision-making,” and every single location you discover and explore is exactly the same as every other.

Setting off to discover some identical planets!

Emergence Event has a lot of problems.

I should take a moment here to clarify. Emergence Event isn’t broken. It’s a competent game with a lot of good ideas. It features a robust tech tree that gives a satisfying power ramp-up as you reach its higher levels. Each player’s captain has interesting unique abilities that distinguish them from the others, and a unique tech that reinforces their strengths even further. Each player can complete a personal three-act story arc with surprisingly well-written flavor. The game incentivizes boldly exploring the galaxy’s frontier, an essential characteristic for any space game.

So yes. There are lots of things to like in Emergence Event. None distract from the game’s deeply uninteresting and unengaging core.

This is a rules-and-chits heavy two-hour sci-fi exploration game where the main gameplay mechanic is meeting target numbers.

Literally the only reference to how to meet target numbers/what rewards you receive. These tiles will be passed around the table constantly.

So, what is a target number? Simply put, a certain stat value needed to control a location.

Each captain has six stats, each with base values ranging from two to four. Nominally these are things like “tactics,” “science,” “diplomacy,” etc. In practice, the only thing that distinguishes them from the others is iconography. A diplomacy-heavy race won’t play any different from a war-mad one. They just have a higher number near the yellow boxing ring with a pyramid in it.

The “Commander of the Evolved” player board. See, you can tell he’s no diplomat because he only has two yellow boxing rings with pyramids in them. Also, if it looks like the tech tree section doesn’t lay flat, it’s because they don’t.

A usual spread of cards. The arrow at the bottom represents one movement point. The icons add to your stats.

There sounds like there should be some tension about whether to use your cards for movement or for stats—”ooh, do I rush to the planet but skimp on stats or take it slow and save my big cards for later”—but there never is.

I want to make this as clear as I can: this is boring.

There are no special planets. They’re all the same. All have the same target number—six to nine, if you were wondering, but why would you be? All give you the same victory points and rewards. All let you “repair” as a bonus action (discard damage cards clogging up your hand). The different types of locations give you different rewards/bonus actions, but it is rare that a player gets to make a decision about which location to take over. Much more common is seeing your hand and discovering you are only capable of taking over one nearby planet/asteroid/space station. So you do that.

I bet you’re thinking, “at least this game isn’t punishingly fiddly.” Well, don’t I have a surprise for you! It is!

Just one example: when someone does meet a target number (often), you must:

This score/movement/preparation/game round board needs to be fiddled with at all times.

Did I mention that this nightmare of cascading triggers is literally the main mechanic of the game? Imagine what horrors await when someone plays a captain card, a special global-effect super-card that negatively affects all other players. Paragraphs of triggers. It’s a rough go, I tell you.

I don’t like having to do this, you know. I’m not having fun writing this review. I wanted to like Emergence Event. I still do! The art is great. The theme and flavor text are delightful. I’m a sucker for asymmetrical player powers and they’re pulled off well here. The way that the speed of the game is tied to how much your ship moves? Brilliant! Clever!

Whoa! Look how much they fiction they provide for each captain! Incredible and appreciated! But…

This cool flavor text and plot amounts to nothing. An interesting bit of story boils down to “do you have seven blue dots or yellow hexes? Do you? Yes or no?”

At hour two, though, I was ready to rush any punk trying to say “target number” again. Maybe I’m missing something, but I’ve never seen a game of this size and ambition lean so hard on such a terribly boring mechanic. Your cards dictate your turn to you: “this is the thing you can do. Do it.” The stats are interchangeable and there is no intuitive reason why a given location asks for certain ones. It’s all so bland. So samey. If I’m going science, I want to unlock abilities no one else has. If I’m going military, I want to be able to attack and loot. If I’m going diplomatic, I want sneaky secret one-shots that affect the political landscape. I do not want to meet an effing target number.

Do you hear me, Emergence Event? I DO NOT WANT TO MEET A TARGET NUMBER.

Lt. Commander Hand switched on the lights. My eyelids fluttered open. I didn’t recall falling asleep. Hours must have passed.

“What happened, Hand? Have we taken control of the planet?”

“Yes, Captain,” he said. “There was an alien race of genetically modified psionics living on the surface! They say they were bred as a living computer by a now-extinct trading consortium!”

“The crew’s fine. Come on, let’s go. We’re going to go take control of an asteroid field, Captain. You’ll like that, won’t you?”

“I guess,” I said. “It seems like the thrill is gone. I thought…I thought there’d be so much more. I got into space exploration to see things I couldn’t imagine, to face challenges that would push us to the limit. But all we needed was red squares.”

I shrugged. It’s better than Earth.

Emergence Event wastes its strong theme, story, and flashes of brilliance on a dull and unengaging gameplay experience. What should be exciting is rote, samey, and predictable. While a good time can be had with this game, it can’t stand up to the rest of the board games on the market.