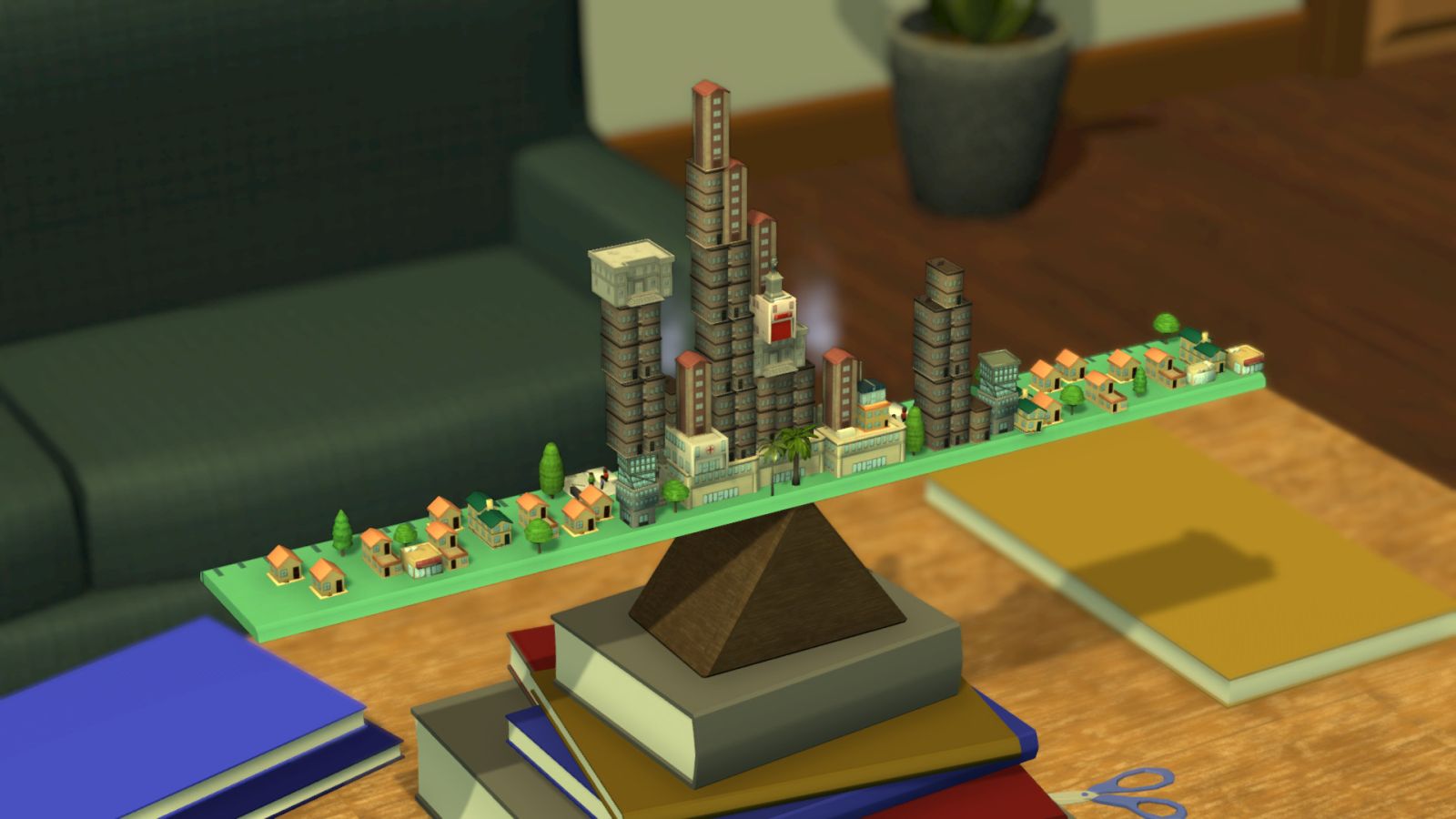 I love city builders. I’ve spent plenty of time shaping waterways and building environmentally friendly sustainable housing, only to destroy it when boredom sets in. Taking a fledgling city, or even a greenfield patch of land and turning it into a massive metropolis is rewarding. So…what if we did all that, but had to balance it on the pedals of a bicycle and at 1/50th of the scale? Well, let me tell you about Tinytopia.

Tinytopia gives you control of a physics-based sandbox world, asking you to build in progressively more wacky places. It starts off with easy builds like Area 51 or stacking huge towers in Shanghai, but soon you’ll be constructing casinos and skyscrapers on rulers, clotheslines, and records. Yep, strap in — this game gets odd in a hurry.

City building is certainly its own reward, but the core gameplay loop has a few twists and turns here. Each level presents you with three objectives — one main and two optional. Sometimes the objective is as simple as planting a series of buildings, though these have a gate-like population density to unlock. The sub objectives are a little more challenging, asking you to hit other milestones like earned cash or having your citizens be at a certain happiness level.

The hook of Tinytopia, beyond the excellent tilt-shift photograph look that is immediately reminiscent of LEGO blocks or a model train set, is the upgrade system. Everything you place in the world has an upgrade path. A simple house can have four people living in it, and it’ll generate a certain amount of tax revenue. Placing a house next to that house bumps it to level two, and placing four in a grid can upgrade them to level three. Condos, finance offices, stores, and everything in between can be upgraded this way, with a few secrets to discover (unless you look in the blueprint menu, ya filthy cheater!), such as the twisted office. Just be careful when you place them as they get a little wiggly while they snap into their next form!

As you work through levels you might say to yourself “Wow, this is pretty easy. There’s hardly any challenge here!” — I know I did. Frankly, as long as you don’t fritter away all of your cash up front, the financial engine will spin up quickly enough, leaving you with enough money to build whatever you need. The financials, however, are not the challenge. Unless you cheat and look at the blueprint list, it’s sometimes about discovering just what it takes to build the next thing. Population density is the challenge when you are building on an oil derrick pad, moreso when trying to do so on the pedal of a bike. In Hawaii, underneath a massive active volcano, your challenge is both density and the fact that tall buildings are easy to knock down and set on fire. Each level has something that’ll at least slow you down, though I didn’t encounter anything that’d stop me.

It took me just over 12 hours to work through the 22 levels (including the tutorial), and there’s a sandbox mode to enjoy beyond that.

As you move through the levels, the game will slowly introduce new elements. Something like an airport or stadium is expensive and made of multiple parts. Placing them, however, will grant bonuses to specific attributes. A farm will boost your population count, an airport drags in additional travelers (and their money), and a stadium keeps everyone happy. For whatever reason, casinos have a huge negative impact on happiness. Having lived 4 hours from Vegas for a very long time, I can say that I always enjoyed casinos, but I digress. It was these little money makers that allowed me to stumble on a bit of a cheat.

Happiness is a combination of fire and police safety, a job to work, medical care, and the overall aesthetics of the area. That last bit is far too easy to manipulate. Dropping the basic safety services into the area immediately raises their happiness, but slamming down tons of $5000 statues everywhere will drive living conditions through the roof. In fact, I managed to max out the happiness to 100% several times just by throwing around statues like they were candy. Those $100,000 obelisks?  Yeah, not so much.

I did run into two other hiccups with Tinytopia, and both of them are pretty minor. There are foundations that you can place that amount to large solid blocks to create flat surfaces on which to build. Unlike every other placeable object in the game, these can’t be moved once dropped. You can destroy them, but that’s hardly the point. You also cannot change the height of them, meaning you’ll end up with some eye-twitchingly uneven spots in any build involving these blocks. The second issue came up on the final level. Occasionally I was unable to select anything to move it. I could click the move icon, then it would deselect before I could grab and move an object. I figured a workaround where I could click on the object first, then click the move icon, and then go back to the object. It’s a clunky bug, but not a serious one.

It’s barely used in the campaign but there are a number of natural disaster buttons just begging to be pressed on the right hand side of the screen. At any time, you can launch a wind-up monster at your town, unleash fire or tornadoes, meteors from the sky, nukes, an earthquake, and more on your unsuspecting citizens. The sandbox only focuses on population and happiness, so for once in your life you won’t need to worry about money.

Tinytopia was a surprise for me. While it is ultimately a city builder-lite, I enjoyed it quite a bit. How much? Well, I guess this says it all, doesn’t it? 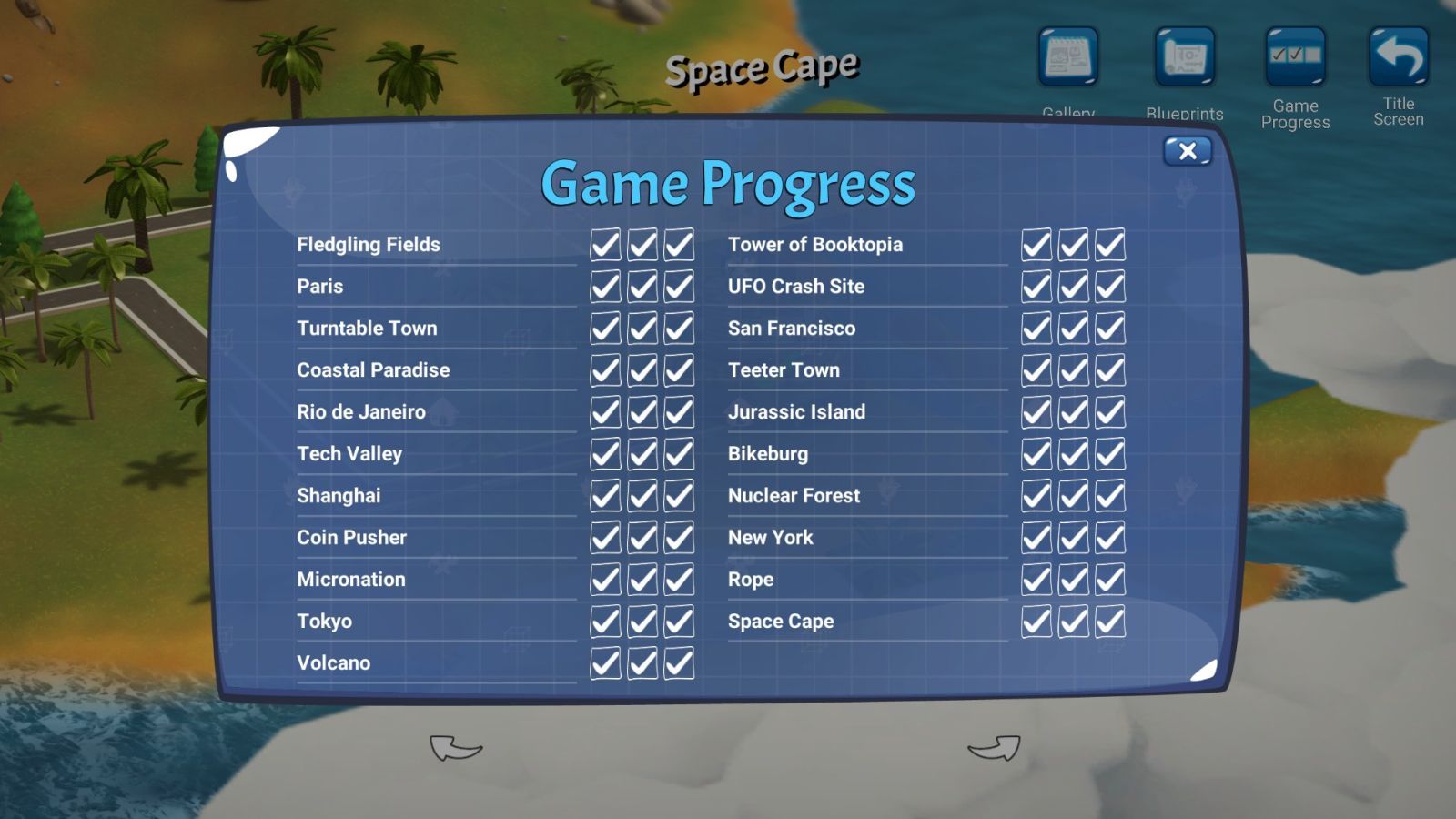 Tinytopia is a casual city builder that hits all the fun notes without asking too much of the architect. About a dozen hours of pure fun, only a few bugs, and an easily-gamed happiness meter hold it back. It’s good city-building comfort food.

Ron Burke is the Editor in Chief for Gaming Trend. Currently living in Fort Worth, Texas, Ron is an old-school gamer who enjoys CRPGs, action/adventure, platformers, music games, and has recently gotten into tabletop gaming. Ron is also a fourth degree black belt, with a Master's rank in Matsumura Seito Shōrin-ryū, Moo Duk Kwan Tang Soo Do, Universal Tang Soo Do Alliance, and International Tang Soo Do Federation. He also holds ranks in several other styles in his search to be a well-rounded fighter. Ron has been married to Gaming Trend Editor, Laura Burke, for 21 years. They have three dogs - Pazuzu (Irish Terrier), Atë, and Calliope (both Australian Kelpie/Pit Bull mixes).
Related Articles: Let's Play, Tinytopia
Share
Tweet
Share
Submit