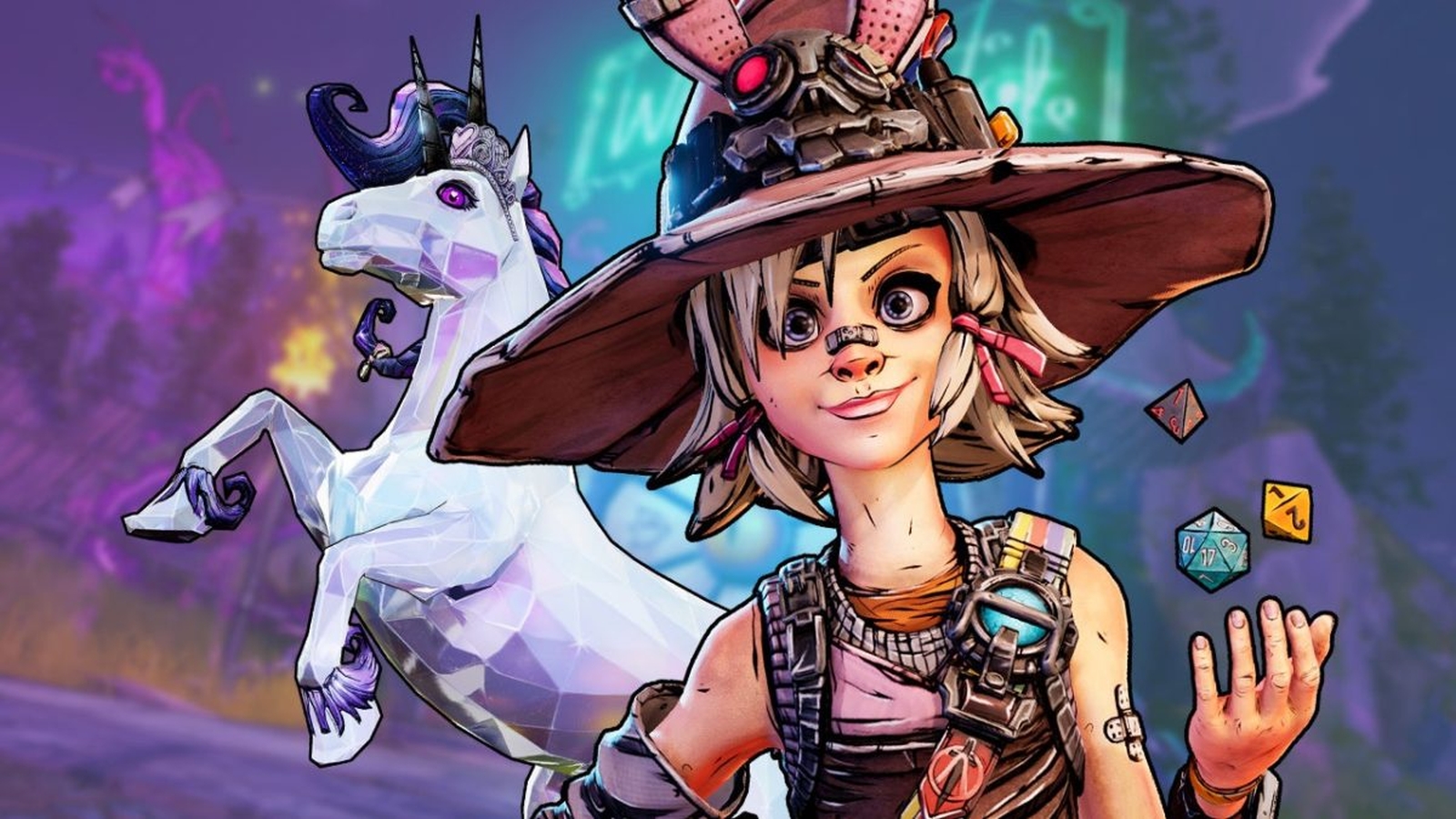 The Dragon Lord has been defeated! Three heroes emerged triumphant from the battle of blades and bullets: the charming Valentine, the warrior Frette, and you – the Newbie. Having restored peace to Queen Butt Stalion’s domain, the three pass into legend, and the next campaign of Bunkers and Badasses… begins. Together, they create a new character, the Fatemaker, who fails to prevent the return of the Dragon Lord – much to Bunker Master Tiny Tina’s dismay. There may be more to this colorful tale than meets the eye.

Tiny Tina’s Wonderlands is basically a Borderlands-style game of Dungeons & Dragons, with the titular character (Ashly Burch) serving as the dungeon master. Valentine (Andy Samberg) and Frette(Wanda Sykes), having crash landed nearby, join in the game along with you, narrating some of your actions and providing color commentary along with the Dragon Lord (Will Arnett) occasionally chiming in. This setting is more than flavor, however, and adds some unique spins on the tried and true Borderlands formula. When creating your character, for example, you actually get to create a character instead of simply choosing a Vault Hunter with a class already attached. For a game that takes place mostly in first person, you have a surprising amount of control over your appearance with several hairstyles, sliders, makeup options, and even the ability to put the sliders in overdrive for a really ridiculous character. However, I do worry that there aren’t enough curly hairstyles for some players, especially seeing as you don’t unlock any over the course of the game.

Once you’ve molded your masterpiece, you then choose your class. You can be a Graveborn, Spellshot, Clawbringer, or Stabromancer. Each class comes with two abilities you can swap between in menus as well as a lengthy skill tree. Furthermore, once you reach a certain point in the game you are able to multiclass, gaining two more abilities and a whole other skill tree from one of the starting classes. For example, you can start as a Graveborn and focus on using the Dark Magic ability and skill to constantly heal yourself while damaging enemies. Then you can multiclass into Spellshot to reduce the cooldown of your ability and spell dramatically – and get a few bonuses like auto-reloading on kills to boot. It’s a highly versatile system that ensures most Fatemakers will be vastly different from one another.

Once you’re in the tutorial zone, the first thing you receive is a melee weapon, not a gun. In previous games, melee was generally more of an emergency thing to get enemies off you in a pinch. In the Wonderlands, however, weapons are an entirely new form of gear with their own stats and effects that may make you want to use them more often. While most of your gear will be familiar, there are several new types such as spells which replace grenades and rings which give you passive class buffs. Spells can have various different effects and elemental properties, such as one that fires multiple projectiles with the press of a button or another that creates an explosion around the caster. Much like abilities, spells have a cooldown after use. 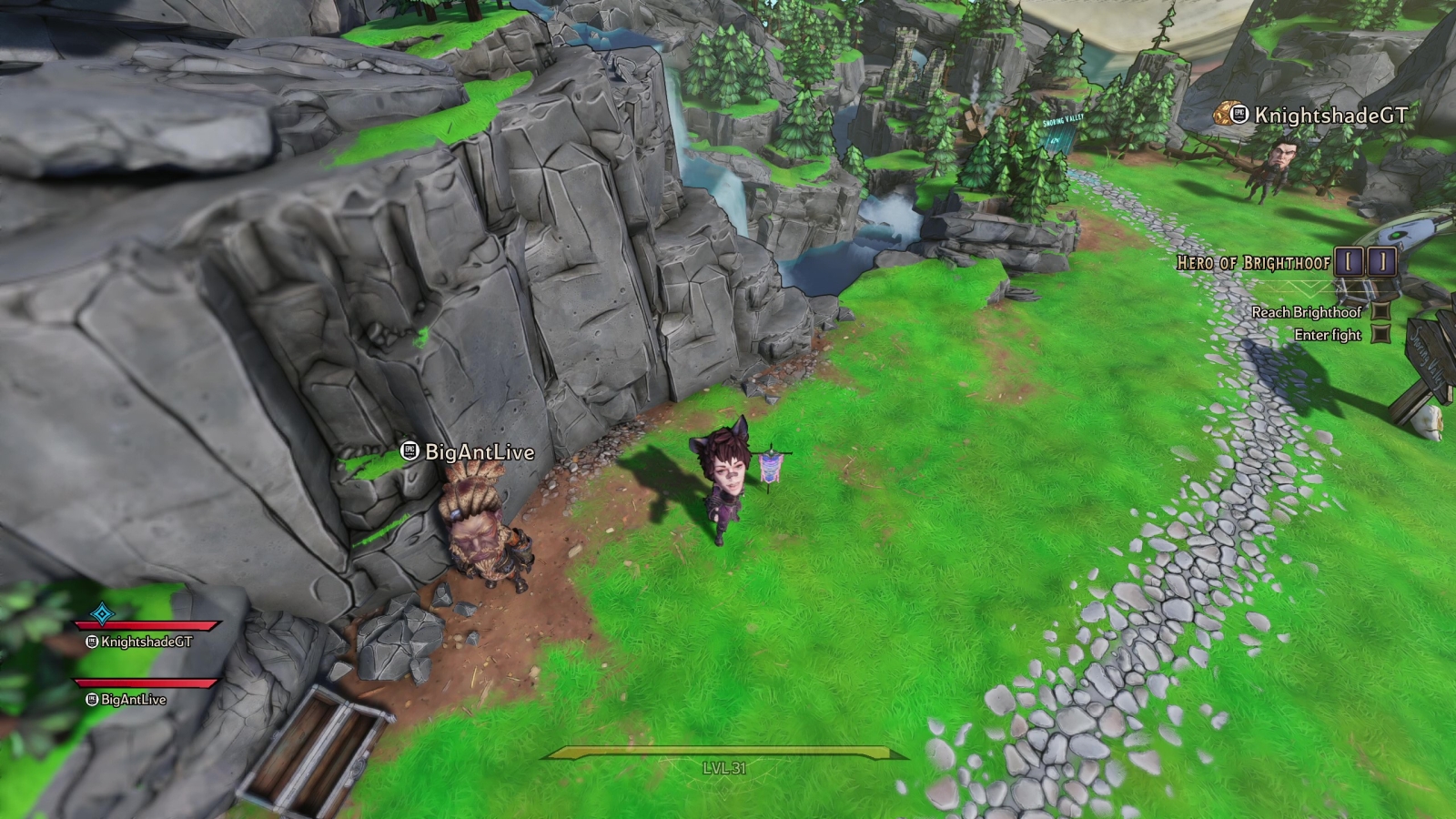 Finally, to replace Badass Points, your character has a full stat sheet for things like strength, dexterity, wisdom, and so on. You receive a point to allocate with each level, with the stats affecting things like crit chance and spell cooldown speed. Your initial stats are determined by your character’s backstory at character creation, with some even starting in the negatives, but you can mitigate this pretty quickly and they only really matter in the endgame or if you’re min-maxing. Regardless, what’s entirely new is very fun to use and the reflavoring of other things fits the fantasy setting nicely, even if you’re still shooting guns. 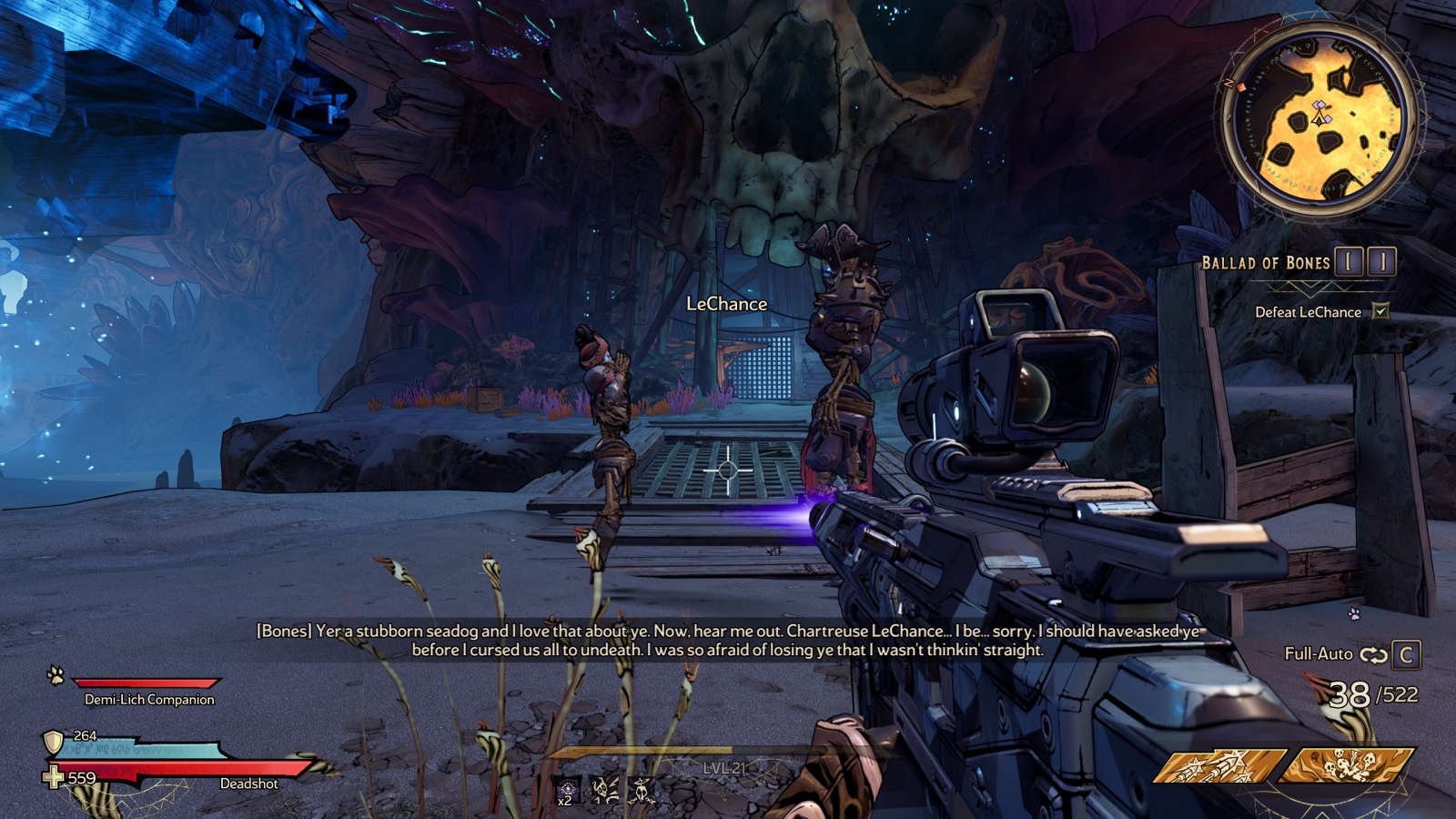 The fantasy spin on Borderlands allows the game to make tons of new jokes and puns that are an absolute delight. Granted you either love or hate the series’ humor, and that’s no different here, but jokes like making C-4 into Fantasy-4 just tickle me silly. It’s incredibly stupid and it knows it. Tiny Tina is wonderful as always, and is the heart of the story once more, but characters like Valentine and Paladin Mike almost steal the show with how charming they are. The game is also unapologetically queer, with several gay characters and at least one trans-coded character. It’s refreshing to see some queer stories told that are just fun, full stop, without any trauma or bigotry or even pointing it out much. They just exist and are normal.

The areas you find those characters in are some of the most interesting in the series. Levels are less open ended than before, but I find they benefit greatly from this – the level and encounter design feels more focused overall and I was never left aimlessly wandering. That’s not to say the game is bereft of the good kind of wandering, however, there are tons of secrets to discover like hidden treasure chests or D20s which increase your loot luck with every you find. Wonderlands also brings back an old RPG tradition: the World Map. 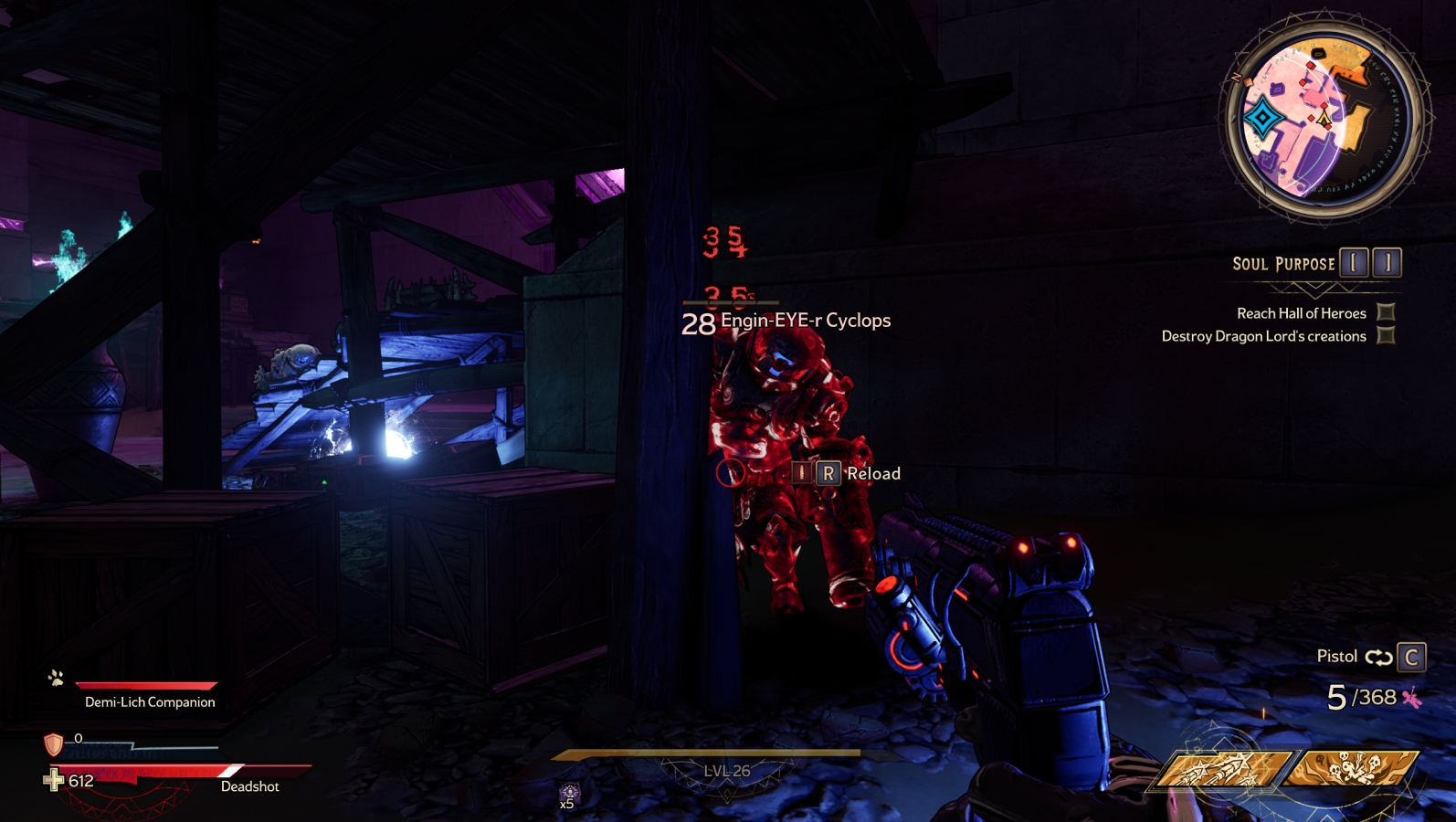 It’s been a long time since I played a new, AAA game with a world map, what with everything being open world now, but it fits perfectly in Wonderlands. As you explore with your big headed miniature, you can see how Tina cobbled this thing together with bottle caps, erasers, and the odd cheese puff serving as an obstacle. A world map wouldn’t be interesting if it had nothing to do, however, Wonderlands is fit to bursting with side quests and optional dungeons. You’ll find NPCs dotted around the map who will give you quests, some of which take place entirely on the map, but you can also find some fun for yourself either through the random encounters (who you can punch away if you’re not feeling it), small traversal puzzles for collectables, and short dungeons. Dungeons are essentially extended random encounters: you’re put into a small arena and need to kill a certain number of enemies before you’re rewarded and a portal to the next section or out of the dungeon opens. These bursts of combat are a lot of fun and, much like the game itself, don’t overstay their welcome.

While the main story will take you to about level 30, there’s still much more to do after the credits roll. We’ve already mentioned the myriad side quests, but there are also shrine pieces to find which grant you permanent buffs like increased running speed or XP gain when brought to the corresponding shrine. Beating the game will also unlock the Chaos Chamber, something of a rogue-like mode in which you can unlock ridiculously unbalanced gear if you survive to the end with enough gems. To increase your chances of good loot, you can also spend some of those gems to increase the difficulty of subsequent encounters. The main game itself is fairly easy, but the Chaos Chamber is no joke and you’ll want to bring a few buddies along if you’re cranking the challenge all the way up. 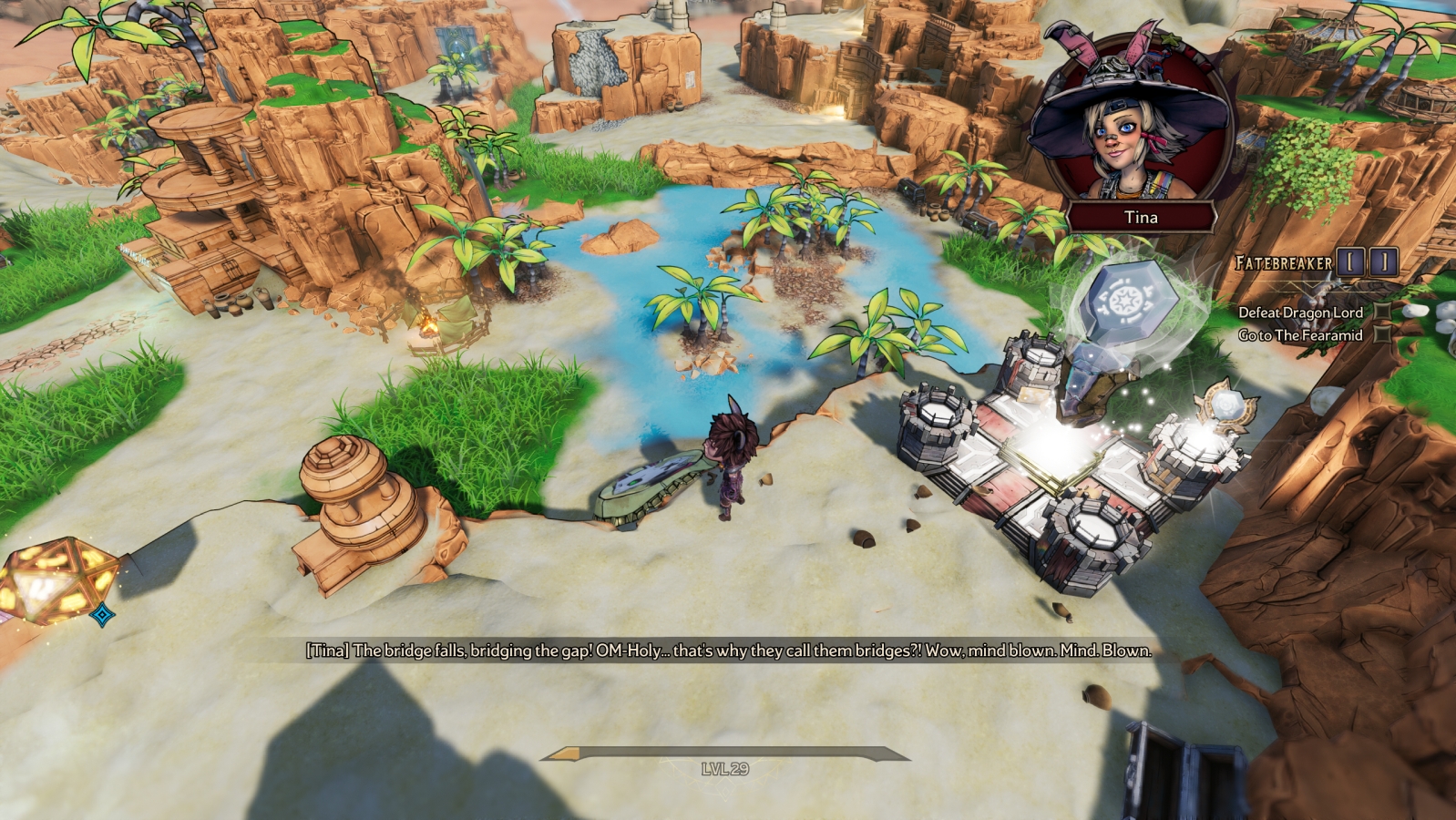 Speaking of friends, you can of course play with an adventuring party of four players. Class abilities can synergize surprisingly well here as you can see in our gameplay footage. One Fatemaker would create a shield which magnetized enemies to it while another would send out an explosion of Dark Magic to damage them. With a full team of four, or even just three, it can feel a bit too easy at times with higher level characters just tearing through foes even when in the level scaling mode. Granted I felt my build in particular was a bit overpowered, I only fully died a total of four times throughout the entire campaign and we’ll have to see how the game handles in the Chaos Chamber, but it does make for a lot of casual fun with friends.

While going through the game again on a different class may have its fun, those looking for a challenge should look elsewhere. There’s no True Vault Hunter mode to be found here, which is a shame because having access to everything in what’s essentially a New Game Plus would make what are already some of the best boss fights in the series even more enjoyable. Sure you can play through the Chaos Chamber again and again, but that’s likely to get repetitive over time, especially given how comparatively little gun variety there is compared to 2. Still, if you’re just looking for a fun, single playthrough maybe with some friends, Tiny Tina’s Wonderlands is the place to be.

Tiny Tina’s Wonderlands presents a fresh take on Borderlands, retaining the core of the series while adding some fun new twists both in its setting and gameplay. Character creation and multi-classing ensure each Fatemaker is unique when shooting, looting, and questing. While it certainly has issues like less weapon variety and a lack of challenging content, this is the best in the series so far.