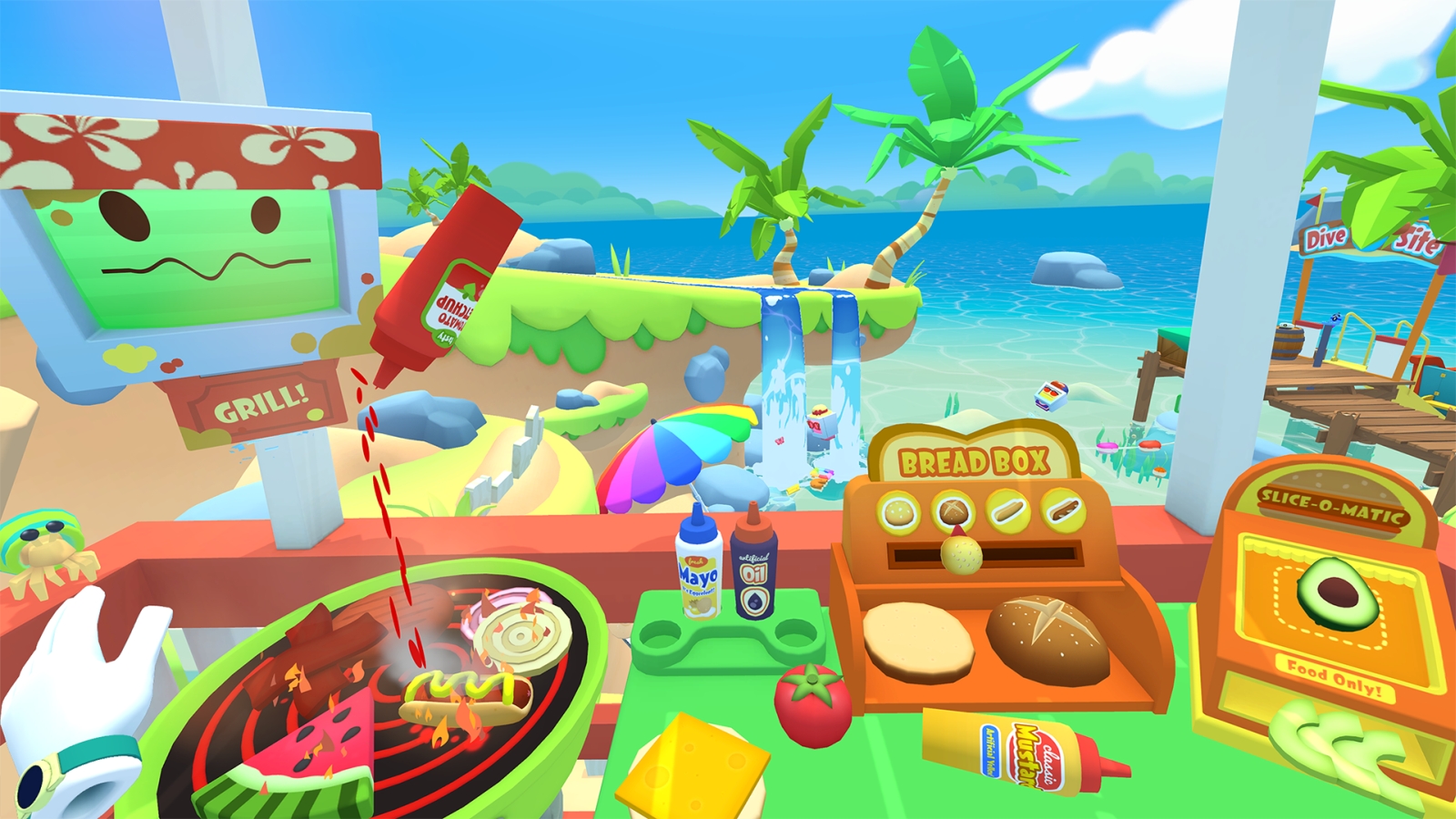 You might recall that we had lots of fun [JOBBING] in the Job Simulator game from Owlchemy lab back in 2017. The game was set up as a series of simulation sandboxes that gave you the chance to make copies, answer phones, and other cubicle fun, then flip some burgers, operate a convenience store, and even grift customers as a mechanic. After all that [JOBBING] it was finally time to put our feet up and engage in a little [RELAXATION]. Grab your hat and sunscreen, human, it’s time for [VACATION SIMULATOR}.

If you have no idea why I’m talking this way, then you’ll probably want to check out the three videos below, each of which showcases the three vacation zones in the game. Not only will they give you a great preview of the style of Vacation Simulator, but it also demonstrates the deadpan humor you can expect as the only meatbag on the island.

The premise of Vacation Simulator is that the travel agent bots would like to gather some data on human vacations, and you are the perfect subject for their experiments. As such, yYour travel agent is already waiting for you, leaving you to zip around the house as you finish up your final packing details. With a quick bath (complete with rubber duckie and bubbles), a change of clothes, and your backpack ready, it’s time to finally set out on the vacations of your dreams. I say vacations as you’ll have a chance to explore the beautiful beaches, dense forests, and Yeti-filled mountains, each with their own delightful robot inhabitants and tons of fun VR puzzles.

One of the first improvements in the game is that you can now personalize your character. From skin tone and haircuts, to beards and hats, you’ll choose how you’d like to look for the adventures ahead. Since you’ll have plenty of selfie opportunities this time around, it’s important you look great!

Once you arrive at one of the vacation destinations, you are greeted by roughly 30 puzzles in each location. Some are simple things like fishing, skipping stones, arranging flowers, and playing catch in the water, but there are also some deviously tricky sandcastle and ice carving puzzles that’ll keep you busy for easily 10 hours or more, and you likely still won’t have discovered everything. Since Job Simulator could be zipped through in about four hours, this is a huge and welcome step in the right direction. 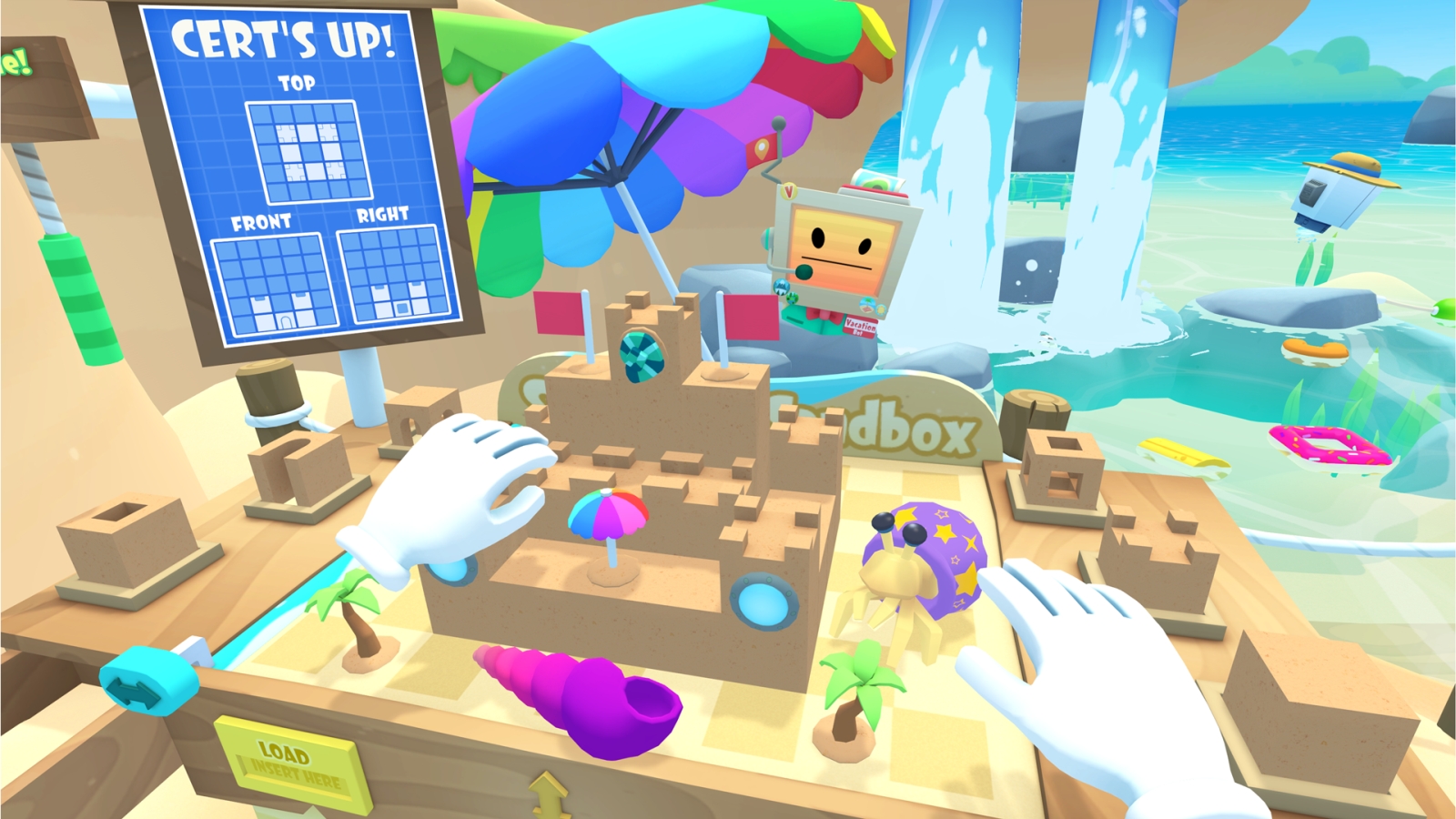 One of the things I enjoyed most about Vacation Simulator is that each area has some sort of food or beverage preparation minigame. There’s also “Bob Moss” who will teach you how to paint, and a kindly grandma-bot who will teach you to knit. (Happy little accidents are more than likely here.) This mechanic gives you a reason to visit with the eager bots in each vacation area. Some bots will tell “scary” stories (which are all about power outages and programming errors) while you prepare s’mores and hotdogs, and others will demand that you make them a lubricant-latte to help take the edge off the chilly mountain air.

With Owlchemy labs planning to release the game not only on Vive, but also Oculus Rift and PSVR (other VR platforms are planned for the future), Vacation Simulator is made as a stationary experience. You’ll move by pressing the touchpad to move the direction you are facing, using a teleportation mechanic. This ensures a nausea-free experience, keeping the game accessible for a wide audience. Vacation Simulator solves a problem in Job Simulator where players would occasionally have trouble picking up objects from the ground:here, objects on the ground will pop upwards towards your waiting hands. This helps players stay safely in their playspace, ending any jarring camera hitches once and for all.

If you enjoyed the writing and shenanigans in Job Simulator, they are turned up to 11 in Vacation Simulator. I managed to earn a hermit crab buddy early on in my adventures. A quick pull on the shell reveals that the crabs are “plugged in” to their shells not unlike a power plug. I discovered this right before I put the little gun on a machine that will make anything (and I mean ANYTHING) into a shrub to be planted in your own personal garden via a minigame.

If I had a complaint (and it’d be a very minor one), it’d be that the collection of minigames in Vacation Simulator range widely in replayability. Some of the games are more “one and done” and others give you the freedom to go completely nuts. I had somebody ask me for a “hot cup of fluid” — I gave him a steaming mug of hot sauce. Another asked me for a waffle. I made his waffle out of fish. The moments where the game lets you be free are the most rewarding. Similarly, the puzzles can be downright head scratching. On the other hand, once I figured out how to get the right colored fish while fishing, the game was over shortly thereafter. These moments (the game rewards them as “memories” to be captured for this experiment) are often short-lived or formulaic to the point where you won’t likely repeat them. That said, it won’t stop you from smiling while you watch your friends experience it for the first time.

I have a lot of VR games because I think they transcend barriers for non-gamers, and they are also a whole lot of fun. Job Simulator was a great way to break in new players, but I have to say that Vacation Simulator will be supplanting (or at least supplementing) their previous effort. While some of the minigames won’t keep you coming back, there’s enough here to keep you busy for quite a while. Owlchemy Labs has spent four years hard at work, but I’m gonna enjoy bit of my Vacation Simulation.

Ron Burke is the Editor in Chief for Gaming Trend. Currently living in Fort Worth, Texas, Ron is an old-school gamer who enjoys CRPGs, action/adventure, platformers, music games, and has recently gotten into tabletop gaming. Ron is also a fourth degree black belt, with a Master's rank in Matsumura Seito Shōrin-ryū, Moo Duk Kwan Tang Soo Do, Universal Tang Soo Do Alliance, and International Tang Soo Do Federation. He also holds ranks in several other styles in his search to be a well-rounded fighter. Ron has been married to Gaming Trend Editor, Laura Burke, for 21 years. They have three dogs - Pazuzu (Irish Terrier), Atë, and Calliope (both Australian Kelpie/Pit Bull mixes).
Related Articles: Let's Play, Vacation Simulator, VR
Share
Tweet
Share
Submit