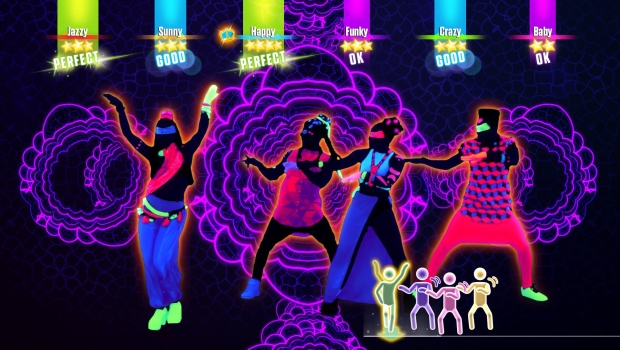 With the launch of a new platform, it’s not a surprise to see Ubisoft support Nintendo’s freshly-released console right out of the gate with their annual installment of Just Dance 2017. With a multitude of motion sensing gyroscopes, it’s time to shake our booty with the Nintendo Switch.

At the core, Just Dance 2017 is familiar territory. Offering up just over 40 songs from artists such as DNCE, Sia, Queen, Maroon 5, Ariana Grande, and Hatsune Miku, the format hasn’t changed much since the original game launched in 2009. On-screen dancers (who are WAY better than you) undulate to the latest tracks, and you mimic their movement. In this version (I’ve been playing the game on Xbox consoles with Kinect support up until now), a single glove on the dancer is illuminated a different color, and that’s the central tracking focal point for the game. Movement in the space and motions that approximate what’s happening on your screen earns you points, and points equate to jewels that unlock cosmetic stuff. It’s simplicity defined.

A number of modes return from last year, including Dance Quest (battle against the AI in a set of three songs), Sweat mode (it’s exactly what you expect, setting up a playlist for burning off calories, tracking them for you and encouraging your music-fueled cardio.), Just Dance TV (watch others shake their groove thing in a curated YouTube-like ecosystem), and Dance Matchup (it’s mode full of mashups – think the show Glee).

World Dance Floor is a returning mode as well. Here you dance the same routine as other players, culminating in a world ranking. It’s a tournament where nobody can see how you dance but you. Just Dance TV lets you watch what equates to Vine videos of choppy “autodances” — I’m still not sure what the purpose of this mode is supposed to be. Dance Quest is exactly what it sounds like, setting up a story of sorts that explains why you are dancing. There are ten “quests” to tackle, with Just Dance Unlimited offering up another twenty one if you are a subscriber.

Completely new this year is a mode entitled Just Dance Machine. Aliens need your dance energy to make it home — their ship being, naturally, a giant disco ball. After a scan of the planet to determine that chickens and bananas can’t be used for fuel, they determined that only the power of dance can power their journey. Kicking things off with an air-guitar, the next scenarios were ballet, hip-hop, conducting a symphony, and rounding out with a Ukrainian Hopak (Russian kicking dance). They aren’t tied to a specific song, instead using more ‘generic’ unlicensed tracks for each style.

After transferring their dance energy, another three scenarios were unlocked. Play proceeds with five random movement types until you’ve unlocked all 32. Cosmic rounds whip your tail by doubling the speed of whatever randomly selected movement type. It’s all good fun and keeps you on your toes with all sorts of crazy things like The Charleston, gymnastics, and even a spot-on Maori Haka dance! It’s a good distraction, and it’s great to see Ubisoft thinking outside the box on something that has a well-established formula, but it’s unlikely that this mode will have any legs to it.

The tracklist is what I can only describe as “eclectic”. For every song I recognized, there were at least three I didn’t. That said, there is a lot more recent hit music, a lot fewer throwaway songs than 2016 (examples from last year being William Tell Overture, Balkan Blast Remix from Angry Birds, Chiwawa, etc) and overall something for almost everyone in here. Party favorites were Lean On, Cheap Thrills, and Scream & Shout. We have the entire setlist covered, of course, so you can check and see if your favorite track made the cut.

The game comes with a 90 day subscription to Just Dance Unlimited — the subscription model for players who want an ever-increasing library of songs. At over 200 songs, it’s now a very respectable service, and a must-have for any party that’ll feature this title. At $6.99 a month, or $39.99 for the year, it might be just what you need for your next drunken dance-off get together. While the team has been making steady improvements to the formula, this is the golden key. This model ensures a steady drip of fresh content at a price that is reasonable.

Despite improvements in song sorting, the user interface is still a little confusing. Selecting and creating multiple profiles was a little obtuse, and dropping back to single player required a full exit as we simply couldn’t figure out how to sign everyone out. If there’s one area I’d like to see improved in the next installment, it has to be the user interface.

I don’t know what’s going on, but it’s awesome.

While the PlayStation 4 doesn’t have avatars, and the Xbox One is seemingly moving away from the proprietary avatar system the Xbox 360 provided, the Nintendo Switch maintains the Mii universe, as well as giving you a profile picture of some of their most iconic game characters. It was surprising to me that Just Dance 2017 asks you to create a profile solely for the game, and pick from a few dozen goofy picture representations of the dancers within the title. The reasoning behind the “extra” profile became clear when I started unlocking new avatars after completing a dance routine. As you earn points you’ll get gems at each ‘milestone’; seven being a near perfect execution. These points, levels you acquire, and game progress allow you to unlock new skins, backgrounds, avatars, and even songs. Finishing a dance routine also unlocks one of the 112 avatar pictures for your profile. These are merely cosmetic, but it at least adds a collectible element to the game.

The Joy-Cons are still very much in new-hardware territory, but their versatile nature works remarkably well for Just Dance as always having a second Joy-Con meant easily handing them out to other players. The game supports up to six, which fits nicely with the multiplayer-encouraging Switch platform. If you don’t happen to have six Joy-Cons, you can use your smartphone as another controller. Simply connect everyone to the same Wi-Fi source as the Switch, download the app, and follow the incredibly simple instructions and you are off to the races. It works remarkably well with no drops and sharp tracking — the only concern being that your phone doesn’t have a wrist strap.

Conversely, I was surprised to see that when you play solo the game doesn’t allow you to use both Joy-Cons to increase tracking fidelity. Without it, the game really only tracks one hand, meaning you can ignore half the commands — this has been a problem with the series on every platform but the Xbox 360 and Xbox One. Here, it just seems like a bit of an oversight as you can guarantee everyone has at least two controllers at their disposal on any Switch console. It would make the tracking more accurate, pushing players to really emulate the on-screen dancers more completely.

The portable nature of the Switch lends itself nicely to games like 1-2 Switch as they are less about looking at the screen and more about gesture controls. Games like Just Dance 2017 are a little bit more of a challenge as, when undocked, everyone has to crowd around the small screen to see what moves are coming up next. While the screen fidelity is pretty fantastic, there is no substitute for a big screen. It might work well for one, but that “up to six” number starts to look like a game of bumper-humans rather than the crazy dance spectacle Just Dance promises.

While a step up from last year in terms of included tracks, Just Dance 2017 doesn’t bring a lot new to the table -- the meat and potatoes lies in Just Dance Unlimited. The Switch version specifically functions as well as you might expect, offering up an easy second player controller courtesy of readily-available Joy-Cons, though the experience becomes difficult visually once undocked. At this point, it’s what you’d expect from Just Dance, but on a new platform. Consider this tiny cartridge your portal into Just Dance Unlimited as I imagine 2017 might be where physical entries to the series end.

Ron Burke is the Editor in Chief for Gaming Trend. Currently living in Fort Worth, Texas, Ron is an old-school gamer who enjoys CRPGs, action/adventure, platformers, music games, and has recently gotten into tabletop gaming. Ron is also a fourth degree black belt, with a Master's rank in Matsumura Seito Shōrin-ryū, Moo Duk Kwan Tang Soo Do, Universal Tang Soo Do Alliance, and International Tang Soo Do Federation. He also holds ranks in several other styles in his search to be a well-rounded fighter. Ron has been married to Gaming Trend Editor, Laura Burke, for 21 years. They have three dogs - Pazuzu (Irish Terrier), Atë, and Calliope (both Australian Kelpie/Pit Bull mixes).
Related Articles: Just dance 2017
Share
Tweet
Share
Submit