The world of racing is competitive, fast-paced, tense, and full of danger. From real life events such as NASCAR to video games such as Need for Speed and Mario Kart, people have plenty of avenues to get their fix. As with other games, even racing games get reboots. Here we have Grid, which is the latest addition to the TOCA series, and is meant to act as a reboot. Hopping behind the wheel, let’s put the pedal to the metal, burn some rubber, and race to be the top driver. 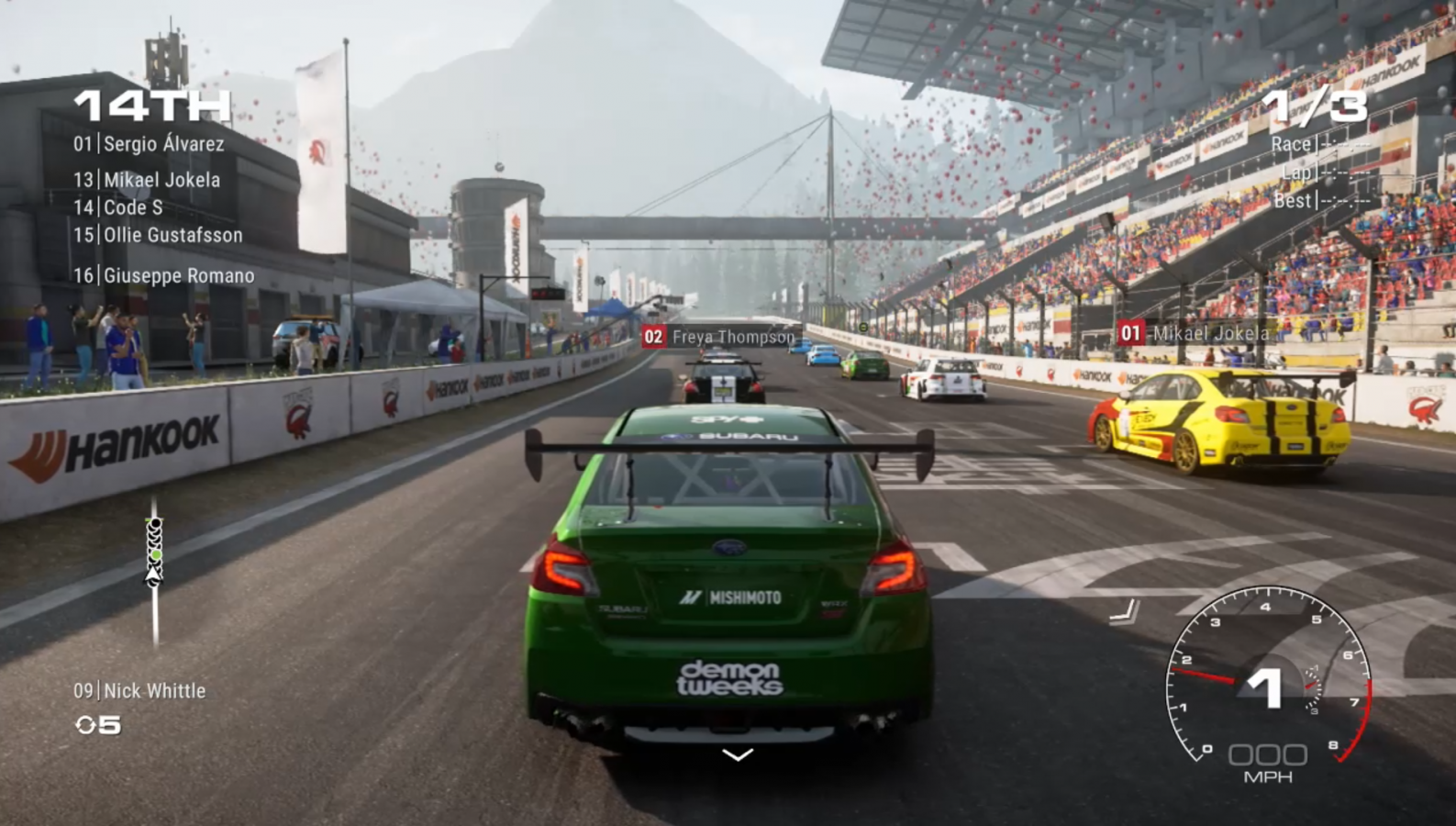 When starting Grid, you get thrown into a few random racing situations, with some of them being in the middle of a race. You are shown short cinematics before being eased into the fact that you’re about to have to take control. I think this was their way to give you a tutorial of the game, although it only teaches you how to use flashback, a pretty cool and unique technique that lets you reverse time in order to correct a mistake. This feature only lets you reverse a short period of time, but if you press it quick enough, that won’t be much of a problem. It’s been incredibly helpful more than a handful of times, either due to my own recklessness or from an aggressive AI. You only get five uses of it per race unless you adjust your settings, but I think five is a fair amount to prevent you from using it as a crutch too often. Other than that, it just gives you some racing experience before you can choose what you want to do next.

The game consists of three different modes: career, multiplayer, and free play. Career is a collection of racing events that you can take part in. You can choose between touring, stock, tuner, GT, FA, and invitational events. Each event has its own selection of cars that you can use, but the downside is that you must use the in-game money to buy a car first. For your first races, this isn’t a big deal, but if you haven’t earned a ton of money from races already, then you’re limited with what you can do. This means that you either need to earn a ton of money before attempting to enter certain races or you need to stick with the races that use similar cars first. The cars are pretty expensive, especially in the later races of each event. This limitation is a bummer and should’ve been an optional way to get better cars instead of being the only way to get your starter car for each event. 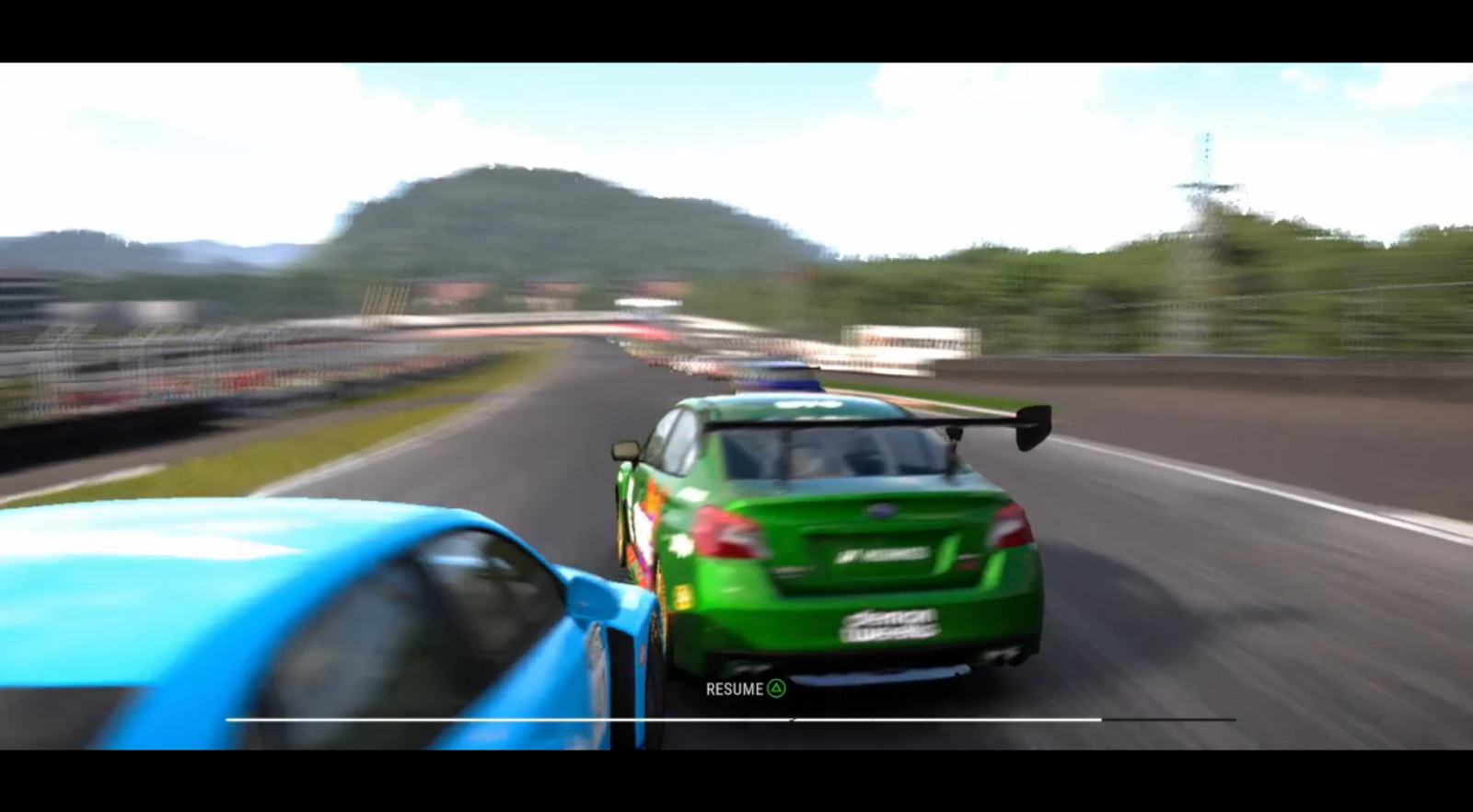 Each event only has one or two races available at the start of the game. If you hover over the dimmed races, you can see what the requirements are to unlock them. They typically involve completing a specific race from earlier in the event. Under each race, there’s a goal that states something like “finish in 3rd or higher place,” “finish in the top half,” or something similar. Those are actually bonus goals that net you more experience and money, which means that no matter what place you end the races in, it counts as completing them. This is pretty nice since it means that you aren’t stopped from progressing because you had trouble in a few races. And believe me, I had issues with some of the races, mostly because of the way those tracks were set up.

Speaking of the tracks, I want to mention that, for the most part, they are very well designed and make the races enjoyable. They offer a variety of twists, turns, and straightaways that keep the races from being purely slow-paced turn-fests or long stretches of highways. That being said, there are some that had too many tight turns that forced you to slow down and mesh together into a clump with your AI opponents. I don’t mind those situations at times, but when it happens too much, you aren’t really given much opportunity to actually pass the other cars. Anyway, back to the career events. Each event has a showdown at the end that has unlock requirements of its own, similar to the other races. If you complete four of these showdowns, then you unlock the Grid world series event. This is the ultimate goal of the career mode, so you’ll be doing plenty of racing in order to achieve that goal. 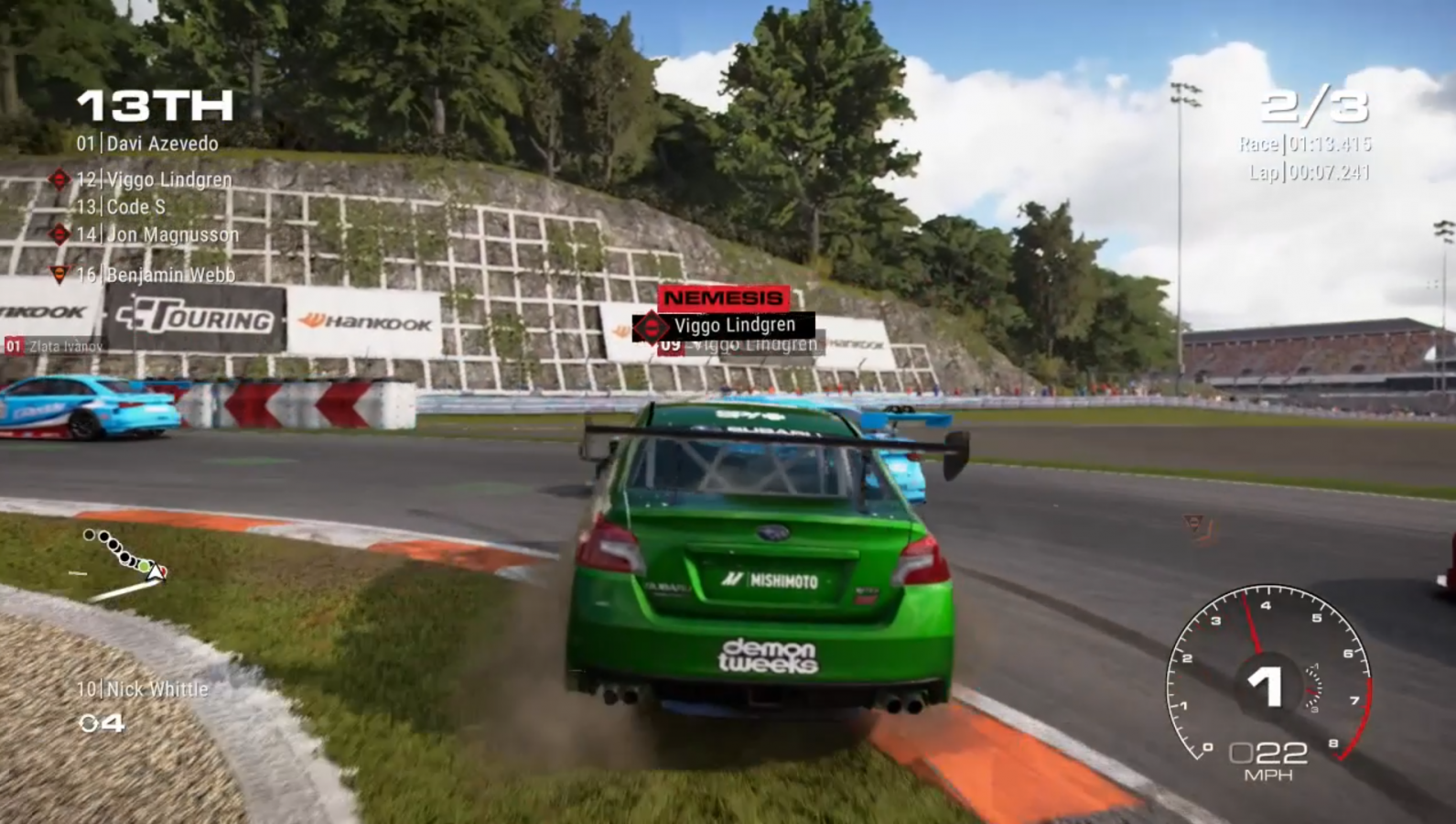 Due to having the game prior to release, I was unable to test out the multiplayer features. I attempted to find some quick races and even set up my own server in the hopes of finding other reviews to test the online with. Alas, I didn’t get lucky. Free play, on the other hand, is your chance to set up your own races. You can choose the number of racers, types of cars, track locations, and so on if you want to race against AI for fun. It’s a nice change of pace for those who want to face off against the AI without anything at stake.

In terms of gameplay, Grid is smooth, fast-paced, and tense at times. Two aspects of the AI make the gameplay much more interesting: the nemesis system and racing personalities. If you hit other racers too many times, you’ll anger them and cause them to come after you. This turns them into your nemesis and the only way to calm them down is by staying out of their way and not smashing into them anymore. Racing personalities on the other hand comes in the form of around 400 different AI racers existing in the code, along with random chaotic events being able to happen during the race. For example, other racers may slam into one another and cause them to flip from a crash. The variety of AI also makes every race unique since you may not be facing off against the same AI from race to race. The developers did their best to create a ton of different racing styles before placing them in the game. 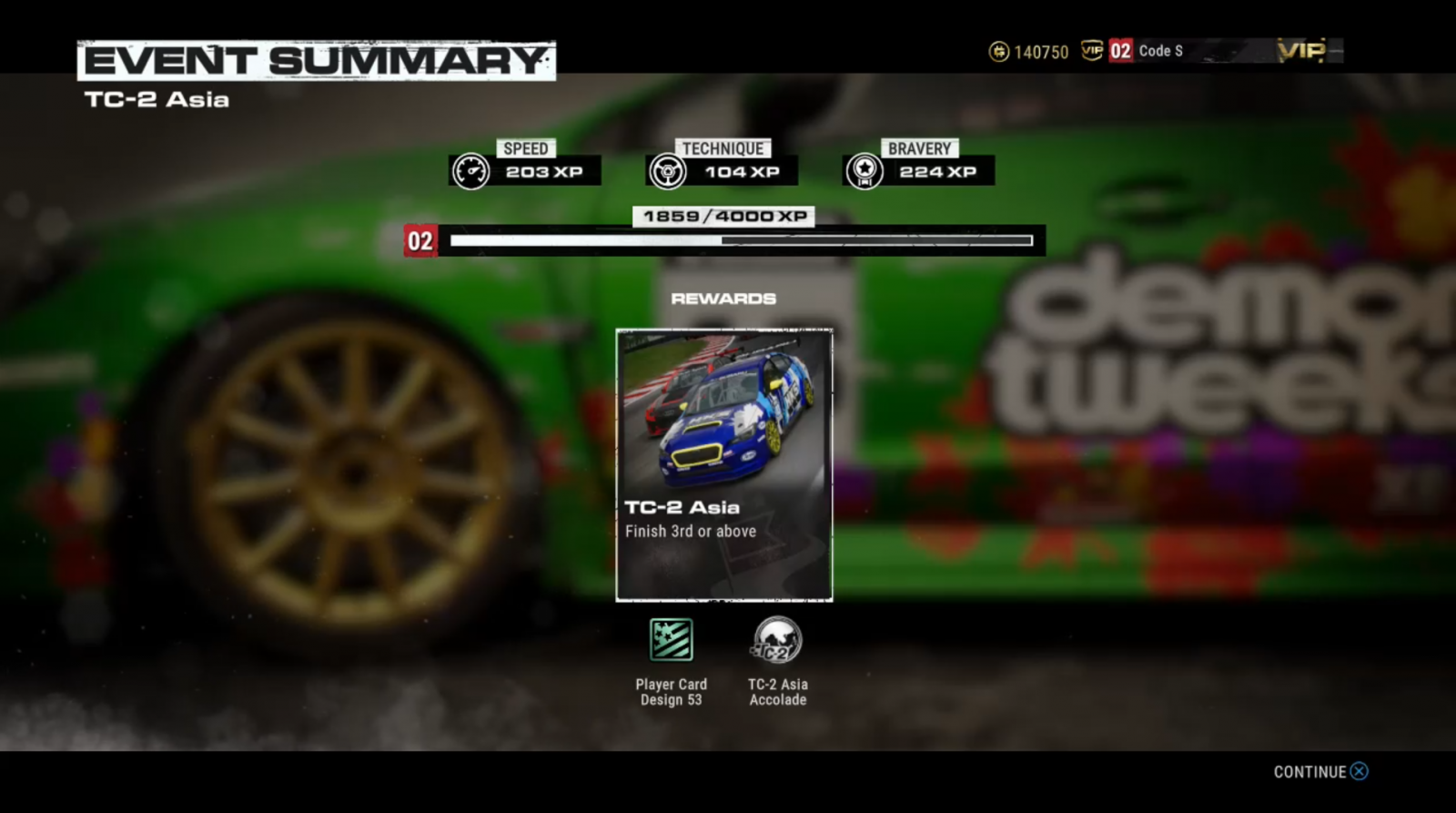 Graphically, the game looks great, especially since you can switch between a handful of camera modes while driving, such as third person, first person, and more. Even though you may be moving too fast to truly enjoy them, the environments look great as well. From the lush grass to the concrete cityscape, there’s plenty to check out. The cars themselves look sleek and tough, which is what you want from a race car. My one issue is that some cinematic cutscenes stutter and have audio problems. The most I noticed of this was in the early cinematic scenes that set up the game, but that didn’t hurt the game too much, although I got a bit worried that my game was about to crash. Even so, Grid is an enjoyable reboot of the series that offers hours of fast-paced, racing fun.

Grid offers an enjoyable racing experience that tests your driving skills. With the nemesis feature, a ton of racing personalities, and the flashback feature, there's a good amount to make it unique. There are some annoying track designs that drag you down, but most of them are winners.

Codi loves to play video games and watch movies. He will watch almost any kind of movie just to experience them. His ideas take inspiration from the shows and movies he watches, and games he plays. He also loves a good pun.
Related Articles: GRID
Share
Tweet
Share
Submit