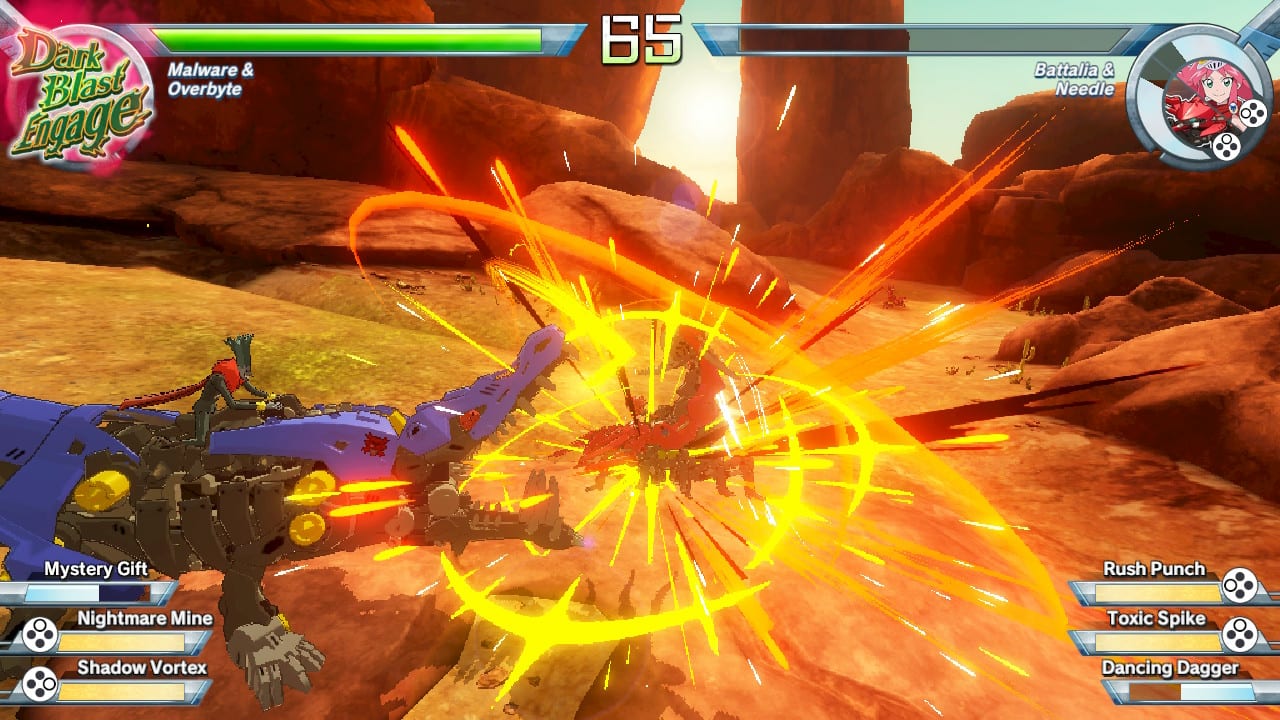 While I’m not really into building toys like LEGO or Gundam, I did hear about these toys called Zoids because my best friend loved them as a kid. While they aren’t as big a juggernaut as the former two brands mentioned, there’s still a dedicated following as well as new lines of the toys which means anime and licensed games are bound to be created. Based on the recent Zoids Wild series, Zoids Wild: Blast Unleashed is a great game for its intended audience, even if its simplistic mechanics and generic story mode may turn off those wanting a deep 3D arena fighter. 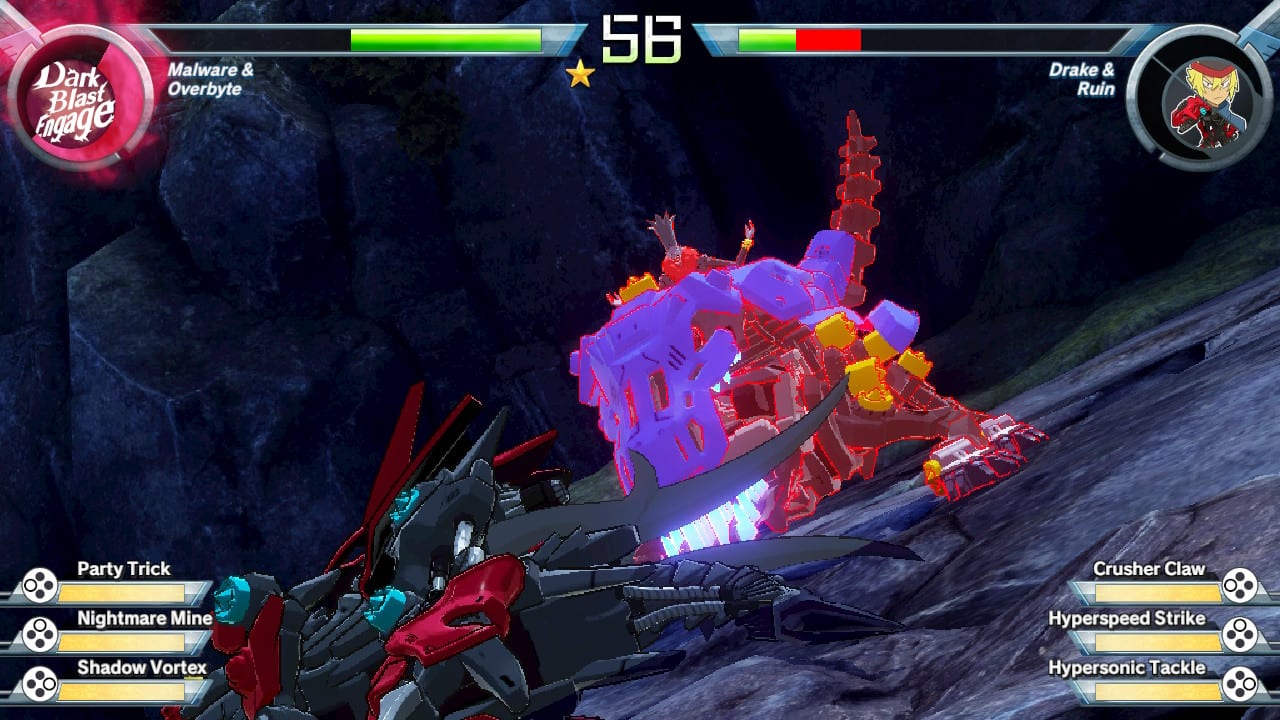 Zoids Wild: Blast Unleashed follows the exploits of Arashi and Team Freedom as he and his friends fight against the evil Dark Metal Empire. (There’s also a third group, Team Supreme, that gets some playable representation as well.) The main storyline revolves around a mysterious sub-species of Zoids that exist for each of the playable characters, as a dark version of Liger (that’s the Zoid that Arashi pilots) appears and makes a mess of things. Couple that with the menacing Gigaboss (a flamboyant yet cruel adversary), and you’ve got yourself a spicy Saturday morning cartoon conflict.

While I wish I could tell you more about the story, unfortunately this is one of those anime games that assumes you know the source material should you want to invest in the original scenarios created for the game. It’s a bit of a shame really considering games like Naruto: Ultimate Ninja Storm and My Hero One’s Justice does a great job at recapping current anime storylines or making new ones; it can be done, but Zoids Wild: Blast Unleashed is strictly aiming for its younger fans.

This rings true with the main gameplay: it’s a 1v1 3D arena fighter where you and another opponent duke it out on a wide circular battlefield pummeling each other until someone reaches zero health. Each character has three special attacks corresponding to a light, heavy, and guard breaker attack. You can also dodge, and pressing R while pressing a respective button will allow you to use your special attack. These attacks use a cooldown system, so you’ll want to be strategic with your attack strings.

In addition to your buttons, you can also activate Wild Blast (for Team Freedom and Supreme members) or Dark Blast (for the Dark Metal Empire), which acts as a limited powerup which grants new special attacks and a powerful Final Blast that you can use once. Land the attack and you’re good to go, but mess up and you can’t use it until you reactivate your Wild Blast or Dark Blast. Activating this while standing still makes it last longer, but using it while chaining a combo or as a defensive maneuver will cause the duration to be shortened. 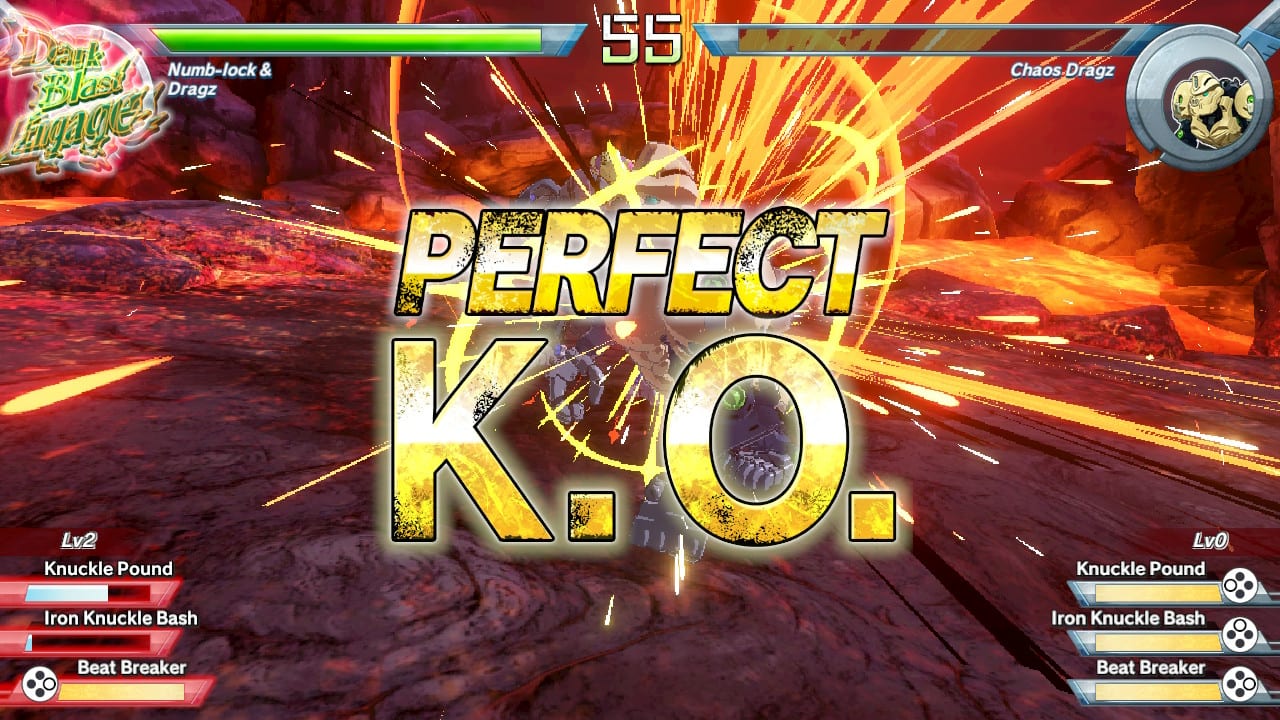 Additionally, the way you can obtain this is different: The good guys need to build up their Wild Blast Gauge by attacking or receiving damage, while the bad guys can use their Dark Blast whenever but only once per round. There’s also a bit of a drawback where Dark Blast will cause you to lose health while powered up, so you need to balance usage wisely. Some characters can unlock the opposite Blast technique through playing story mode, so you might not be locked into using a certain alignment’s techniques if you want to swing for the other team. This is a great comeback mechanic that adds some depth in an otherwise simplistic arena battler.

As for the rest of the game, it’s simple to pick up, but it’s just not that deep. Compared to something like the aforementioned My Hero One’s Justice, the arenas are barren and there’s no interaction within the stages themselves. Because it’s only a 1v1 affair, you can get locked into an attack string pretty easily, with no real way to get out of it save for a Wild or Dark Blast saved up. At times the game feels clunky, and the attack combos are too simple to plan a strategy for early battles. That said, later fights against harder characters will test your skills out, but that only really picks up if you’re doing late fights in the story mode. 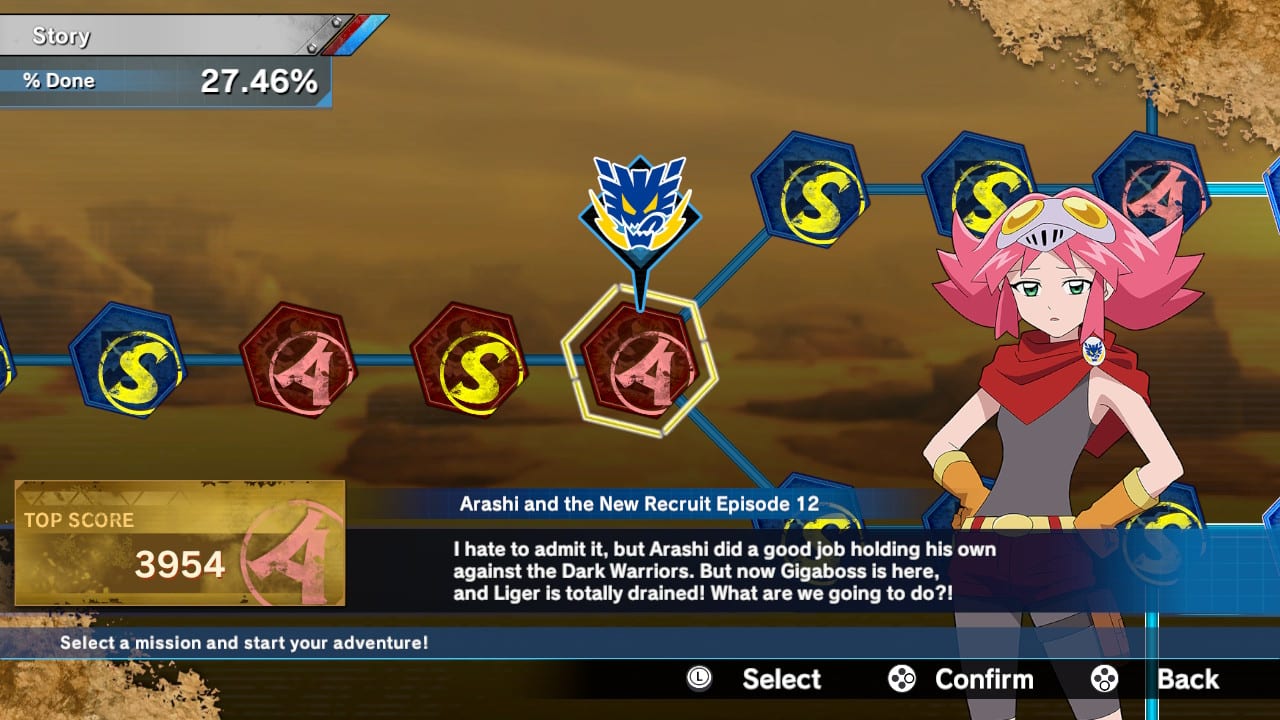 Speaking of story mode, the selection here is slim but at least there’s a lot to enjoy with what’s given to you. You have your main free battle mode (which also acts as a multiplayer fight mode), and then your single player modes with practice, continuous battle, and story. As Outright Games wanted this to be focused on younger children, this game does away with the Japanese version’s paid DLC and instead includes everything in one package. I do enjoy this approach, though the lack of online multiplayer makes the game even more hollow compared to its other contemporary counterparts.

Continuous Battle is, as the mode denotes, a gauntlet of seven different foes per character. While the cutscenes are just character sprites and textboxes, there’s enough voiced grunts and unique intros to make the conversations worthwhile. Once you win a battle, you can choose whether to increase your health, power, gauge replenishment, or score for the next round. It’s reminiscent of the Abyss mode in Blazblue, and while it’s a shallow journey at only seven battles, it’s still a good way for younger kids to get a taste of temporarily increasing their stats. 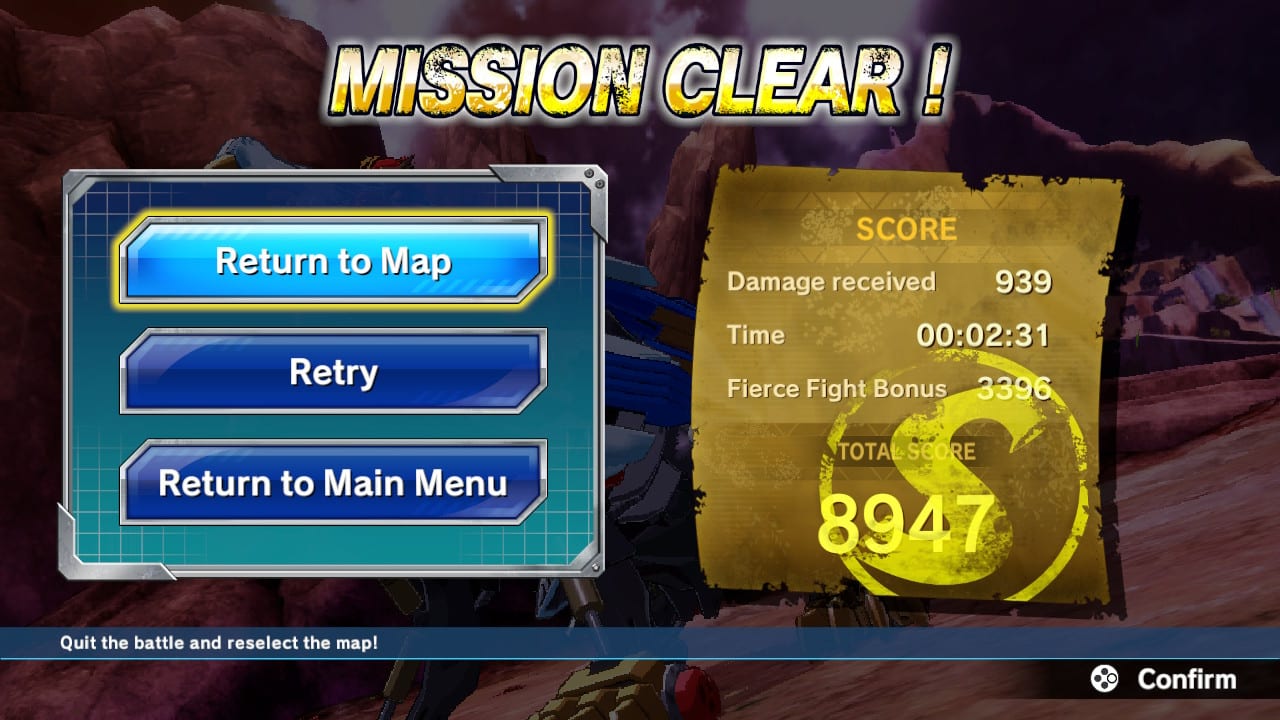 The story mode is where you’re going to spend most of your time in Zoids Wild: Blast Unleashed, as it acts as a campaign mode for each of the playable characters. While you begin with Arashi’s storyline, you’ll be able to access everyone with enough playtime (which will also unlock them in the Free Battle and Continuous Battle modes). It’s here that I wish there could have been more with the presentation; the textbox conversations that were tolerable in Continuous Battle are monotonous here (since every character has to go through more than 10 battles each). There’s not much you can do with a fighting game campaign, but a little more effort here could go a long way.

In the end, I would say that Outright Games did a wonderful job bringing this game over to western shores. It allows younger players to sink their teeth into a mecha arena battler, with some pretty good graphics and no framerate dips to boot. Its clunky and limited attack options with sparse mode selection won’t make this a hit with older audiences, but it’s a fun and simple time if you want an all-ages anime fighting game.

Zoids Wild: Blast Unleashed is great for younger kids and fervent fans of the anime series. While it won’t be endearing for anyone wanting a complex and competitive fighter, there’s enough here to please its intended audience.

Elisha Deogracias is an aspiring accountant by day, freelance writer by night. Before writing for Gaming Trend, he had a small gig on the now defunct Examiner. When not being a third wheel with his best friends on dates or yearning for some closure on Pushing Daisies, he's busy catching up on shonen manga and wacky rhythm games. Mains R.O.B. in Smash. Still doesn't know if he's a kid or a squid.
Related Articles: Zoids Wild: Blast Unleashed
Share
Tweet
Share
Submit