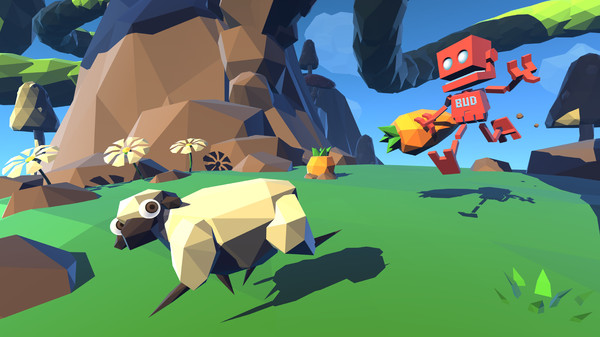 Simplicity can spawn brilliant products; thus are the hopes for many of Ubisoft’s new smaller projects that have been recently released such as Child of Light and Valiant Hearts.  Grow Home is another game that lives in that same vein. It is clear that the game blossomed from a small idea into what the developers envisioned to be a full-blown adventure. While these sorts of stories are very beautiful to follow, they can sometimes produce lackluster results. It is a crapshoot when you base a game on one mechanic; you have to know for sure that the lone mechanic can hold up for a few hours.

Ubisoft Reflections (formerly known as Reflections Interactive) hopes to be on the right side of that dice roll with Grow Home, a game based all around sprouting vines. You sprout these vines in hopes of bringing your main character, BUD (Botanical Utility Droid), back to his home ship, which hangs high above, over 2000 meters in the air. Sprouting these vines is far from as simple as you may think as you can also direct your vines in any direction you prefer, opening up possibilities for exploration. These possibilities lead you to finding items such as a flower and leaf that helps BUD glide from vine to vine in hopes of not falling to his saddening death.

From the moment you are introduced to BUD, you begin to receive communications from his Mother. These communications act as a sort of guidance and emotional reinforcement for BUD as he continues upon his journey. One of the first things you notice about BUD is his unique movement, which sees his legs and arms flailing all over the place as he scrambles forward. This movement adds a level of adorability to your protagonist. But with odd style comes a thick movement mechanic that makes you feel like you are navigating in Jell-O. Somehow, this adds a level of personality to the game as opposed to making it frustrating in the long run, despite the fact that it takes around 20-30 minutes to get used to.

That being said, Grow Home is a very unappealing product in the first hour of playtime. While you acquaint yourself with the movement, you are also getting used to the climbing, which is a huge part of the game as you try to find more vines to sprout. The climbing sees the player using RT and LT (RT is the right arm, LT is left) to slowly move their way up whatever obstacle lies directly in front of them. The simplistic mechanics do not translate well and end up feeling tedious whenever you are forced to partake in them for an extended amount of time. The climbing only occasionally feels tolerable when you are transitioning between climbing and falling in order to find another vine to sprout. More often than not, however, you will be climbing directly upwards, which feels about as thrilling as staring at a Windows 98 screen saver.

While they are certainly better than the aforementioned screensaver, the visuals also leave a bit to desired at points. The textures are very simple, which is appropriate for the game, but it also results in the environment feeling a bit lifeless. That being said, some of the vine visuals and other things found higher in the air can be a bit pleasing. Easily the star in the visual department is BUD.  The cute robot design with his flailing limbs simply never gets old.

Speaking of things that never get old, the main menu music found in Grow Home is ridiculously enjoyable. It’s a techno-infused gem that deserves to be left on repeat for around five minutes before you actually begin the game. Unfortunately, the game itself lacks in-game music and instead relies on BUD’s occasional noises. While BUD is wonderful, Grow Home could have benefitted tremendously from some sort of lite music playing over the back of the movements that you find yourself making. Hell, just put that menu music on repeat for the entirety of the game.

One thing that plagues the entirety of your time with Grow Home is that it feels like a piece of a good game, as opposed to a good game in and of itself. This is only cemented by the fact that the game can be completed within two hours. Actually climbing 2000 meters in the air is not that difficult of a task, surprisingly. Of course, there are side activities littered across the game world such as the previously mentioned leaves and flowers that help you glide around. You will also find one hundred crystals strewn about the world that are just itching to be collected by a nice little robot. Unfortunately, even these collectibles do not stretch the game’s length out to more than 3 or so hours.

Ultimately, Grow Home ends up feeling like a product you really want to love, but is unable to produce the content required to hook your attention. It presents a lovable character, but that character lacks a meaningful world to participate in. If there were better visuals or a stronger story, the strong main character would have been able to develop more and become an integral part of the game. As it is, the game is focused on sprouting vines, which is, no doubt, fun as hell. But that fun begins to fade away when you are forced to slowly make your way up a large tree, in what seems like the slowest way possible. As previously stated, Grow Home feels like a piece of a very enjoyable video game, but by itself it lacks the power to stand on its own two feet.