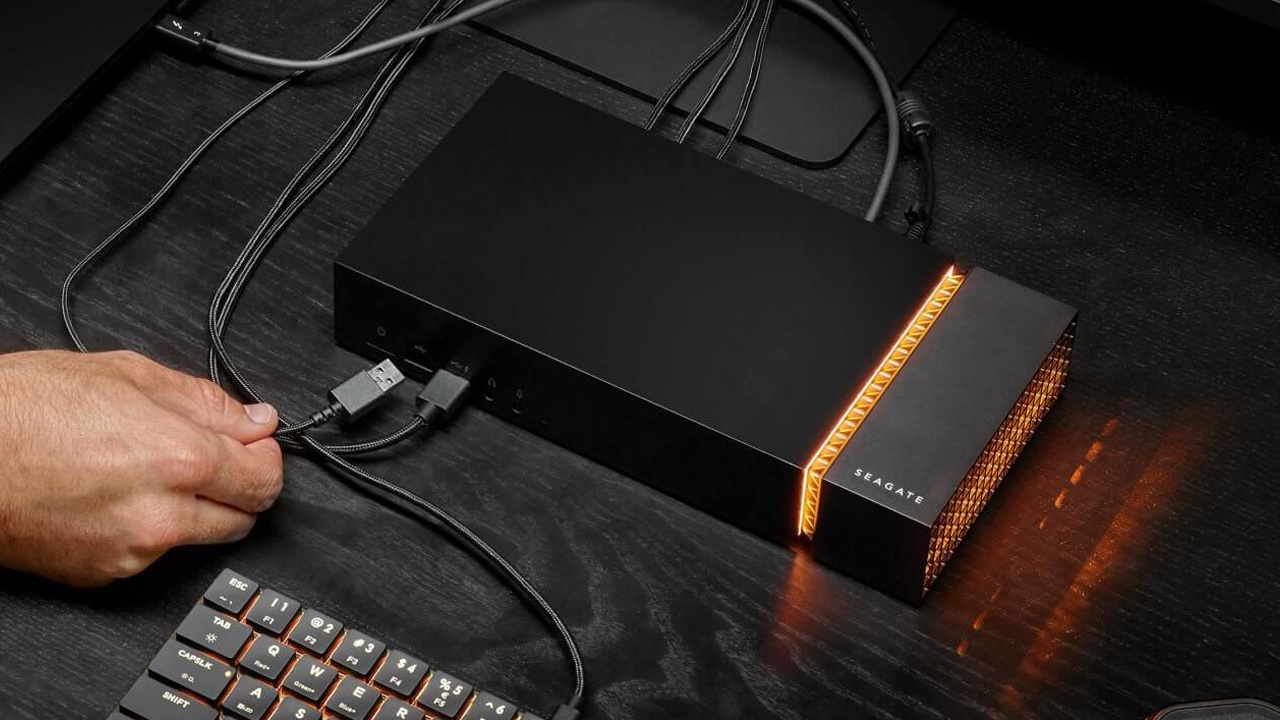 Seagate has been stretching their legs lately. They’ve launched high-end NVMe drives aimed at gamers like the FireCuda 510 (our review), and then followed it up with a Gen4 drive in the FireCuda 520 (our review). They’ve delivered awesome speeds for the Xbox One via their SSD-powered Game Drive (our review), as well as gave us some amazing collectible drives for Cyberpunk 2077, The Last of Us Part II, and Gears 5 (You can see those here). Most recently they’ve dabbled in the high-end Thunderbolt-powered FireCuda Gaming SSD (our review), but they hadn’t released anything to tie it all together…until now. We’ve recently gotten our hands on the Seagate FireCuda Gaming Dock, a dock for Thunderbolt-enabled laptops. Let’s unbox it and take it for a spin.

With Seagate calling this a “Gaming Dock” it’s important to really look at what’s under the hood first. Inside the case lies a 4TB Seagate IronWolf NAS spinning at 7,200-RPM with a 128MB DRAM cache. While this drive is able to run continuously for over 1.2 million hours, it can’t deliver the speeds needed for open world high-speed gaming nowadays. Instead, you’ll want what’s hidden under the aluminum end cap.

Installing the M.2 drive is a breeze. With the cap removed you’ll find a hard metal plate covering the slot with two screws to hold it in place. Removing the plate reveals a single PCIe 3.0 four-lane M.2 NVMe SSD slot. With four lanes, that means it’s capable of delivering theoretical read speeds around 3.5gigs per second, and write speeds of 3.2gigs per second. The cover itself has a thermal pad on it to keep the M.2 drive cool during operation. I placed a 1TB FireCuda 510 M.2 drive into this slot to test out the throughput via the Thunderbolt 3 connection.

Powering up the drive is easy no matter where you are in the world as this device comes with four different plugs to handle whatever plug you might encounter. Beyond the power adapter, the only other thing you’ll need is the included Thunderbolt 3 cable.

While the internal drive is immediately recognized and ready to go, the NVMe M.2 drive needs to be initialized and formatted. After a quick trip to the Windows 10 Disk Management panel, the drive was ready to benchmark and use. 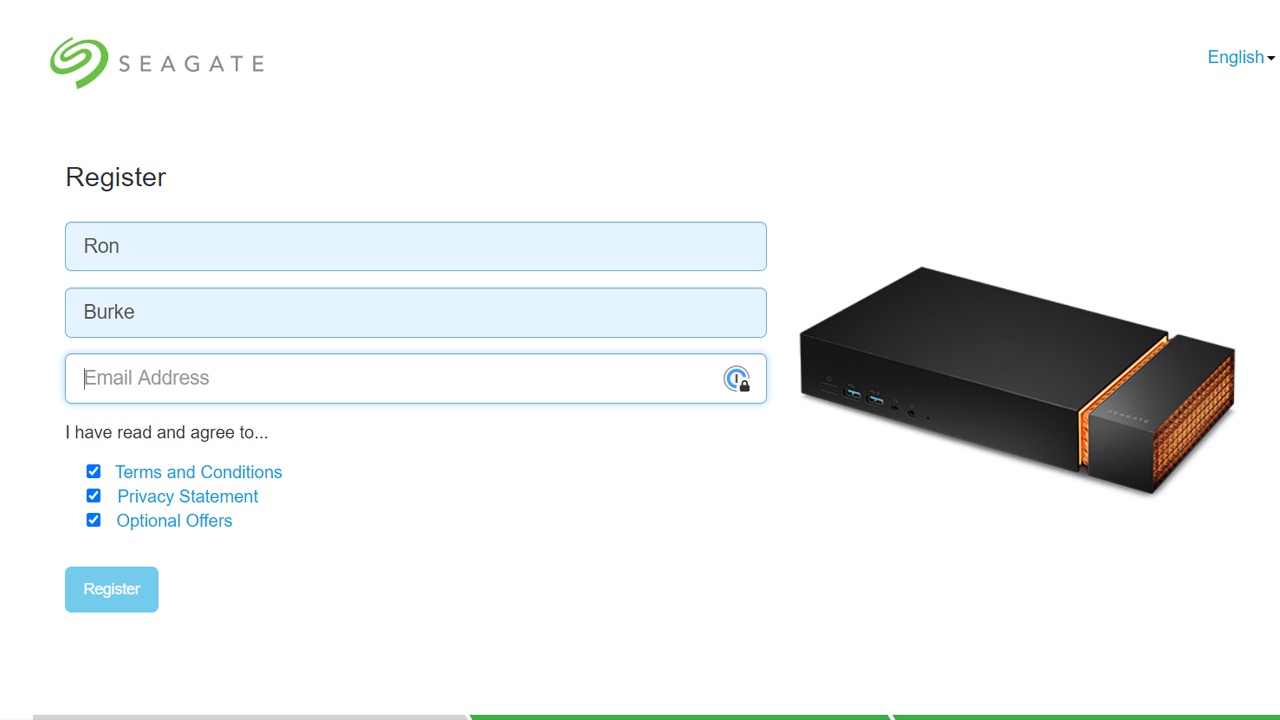 The first time you boot it asks you to register. 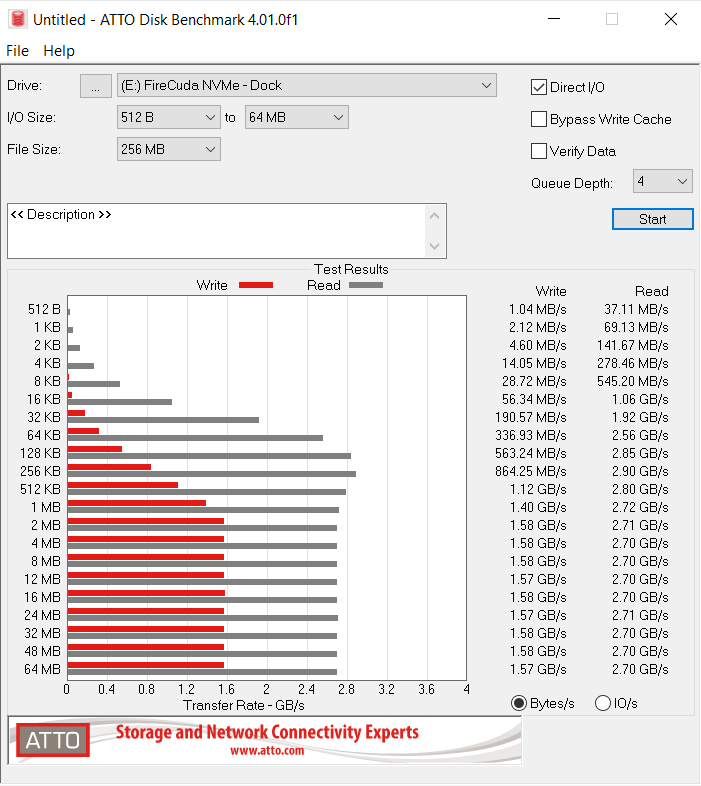 ATTO test of the NVMe drive 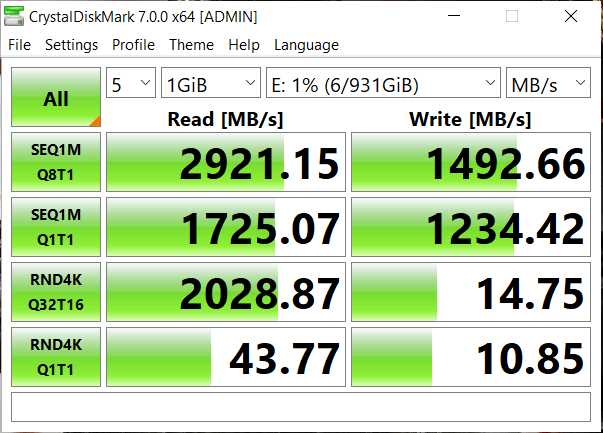 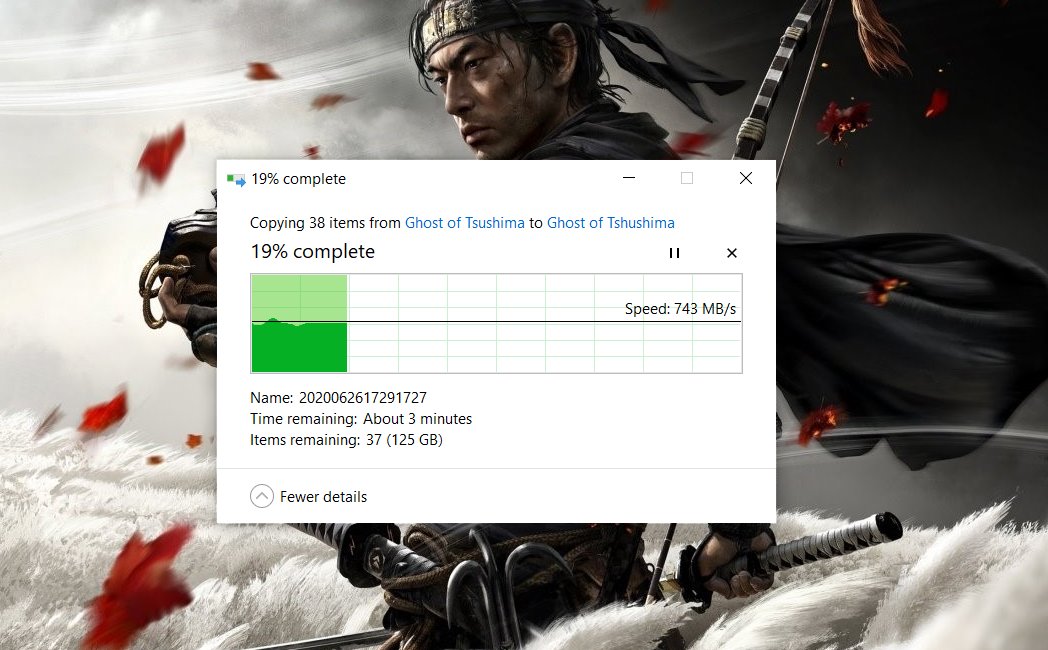 Copying from an SSD to the NVMe.

The theoretical maximum of a Gen3 NVMe M.2 drive, and what we saw in our review was a read speed of roughly 3400MB/s and a write speed of 3200MB/s. Here we see about 2900MB/s for read and 1500MB/s for write, thanks to the Thunderbolt 3 connection speed. It’s still dramatically faster than any mechanical solution, but that is a pretty steep drop for puts to the drive.

Benchmarking the internal hard drive yields some highly consistent speeds — not a surprise as these IronWolf NAS drives are industry-leading drives for constant use. Running the tests multiple times yielded roughly 260MB/s for read and write, making it clear we are making out the rotational speed of the drive. 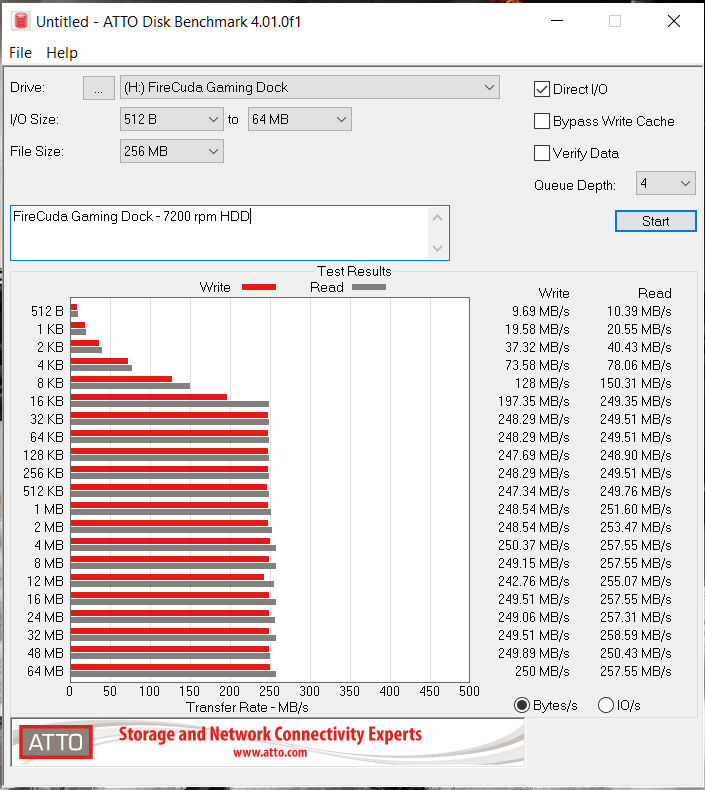 ATTO test of the internal HDD 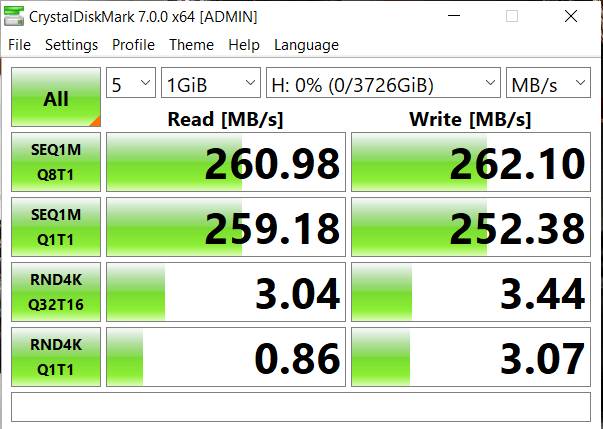 Crystal Diskmark of the Internal HDD

Included with the drive is the Seagate Toolkit software. This provides a simple point and click backup and mirroring solution that is easy enough for even the most novice of users to utilize. Taking snapshots or even running a continuous backup is remarkably simple, as you can see here: 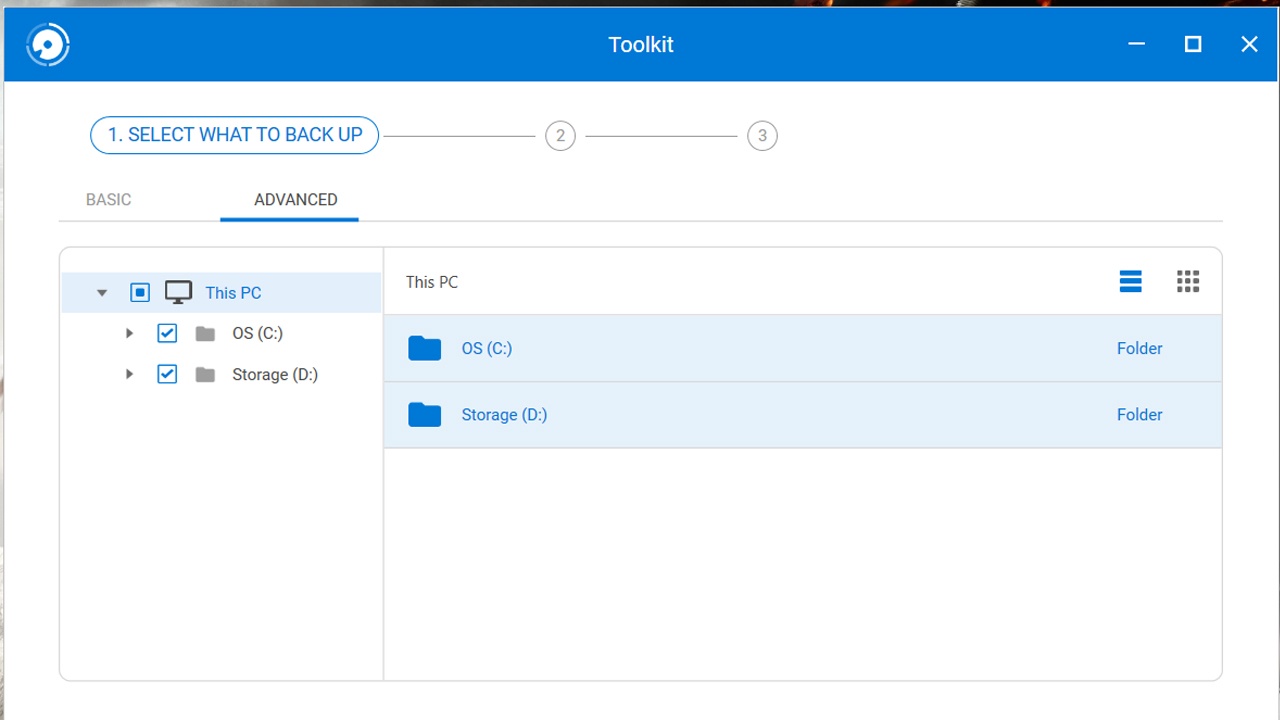 The included backup utility is incredibly simple to use.

The device exterior is a rubberized surface with venting underneath. Headed around the back of the device you’ll find the power connector, a USB-C port for an external monitor, a single DisplayPort 1.4 connection, and three USB 3.1 Gen 2 ports. There’s also a Gigabit Ethernet RJ45 connector.

In the front lies another pair of USB 3.1 Gen 2 ports, with one of them designated as capable of delivering enough power to charge your cell phone if you are inclined. Adjacent to those is also a pair of 3.5mm audio ports — one for headphones and one for a microphone. 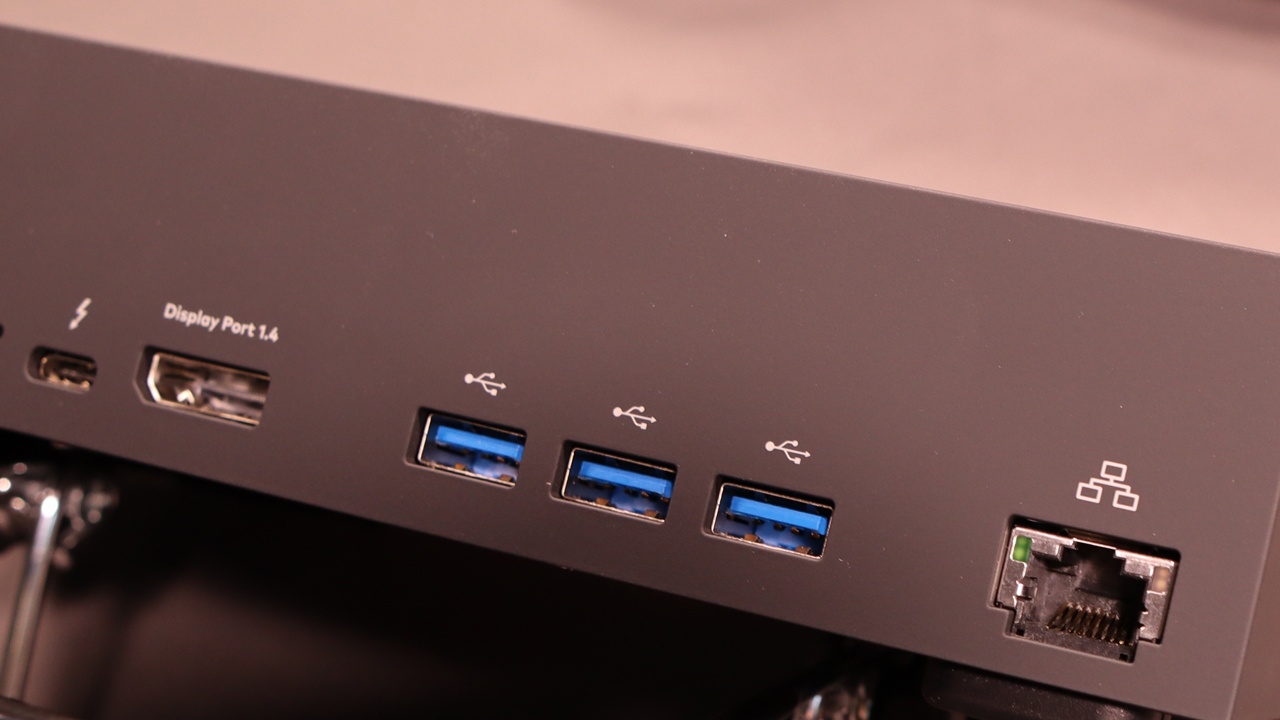 The first time you connect the dock to your laptop you’ll be prompted with a registration tool, as well as an initial configuration of any backups. The drive also supports the full gamut of RGB lighting, as well as three presets and three custom settings with multiple colors. I find that the red setting made the whole affair at least 10% faster.

Even with the Thunderbolt 3 port bottleneck, the FireCuda 510 M.2 drive is more than fast enough to handle heavy-streaming open world titles like Assassin’s Creed Odyssey and Death Stranding. I saw a solid decrease in loading speeds across the board. I also found another appropriate use for the drive setup — my video workflow. I use Adobe Premiere Pro CC, and frankly…it’s a pig. It’ll use every bit of speed you’ll feed it, so I used the M.2 drive’s read and write speeds to handle all of the video scrubbing and renders. Knowing that I may need to make adjustments or re-render objects, I then flowed the raw assets to the IronWolf drive for long term storage. It keeps my laptop clear for games, while keeping work segregated onto the dock — a welcome separation. 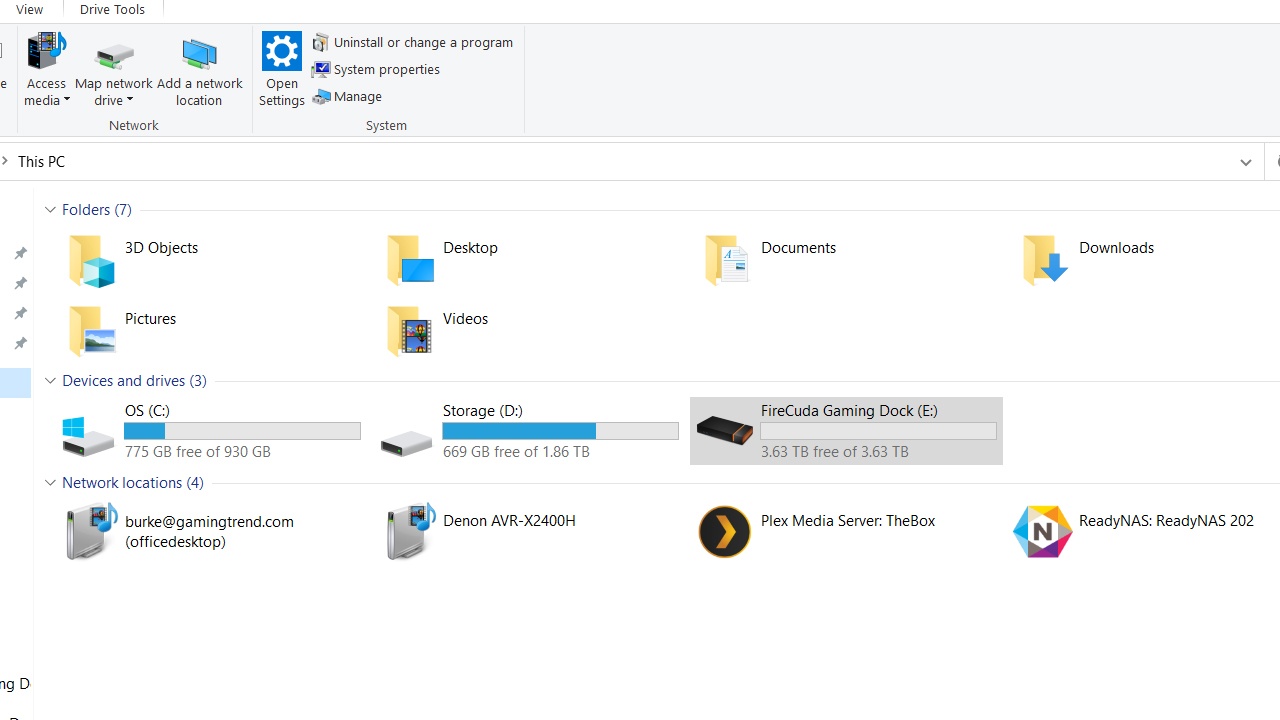 Beyond the hierarchical drives in the dock, the other big lure is the multi-monitor connectivity. This does, however, come with a fairly large caveat. The first connection is handled with DisplayPort 1.4, but your second connection has to be via a USB-C connection. Monitors are just now starting to become popular with this connection method. I happened to have a USB-C monitor handy and can confirm it works exactly as advertised, but you might find yourself needing to upgrade your viewing device to take advantage of the second monitor option. Once again Seagate is running ahead of the curve.

There is one other issue of note with this dock — it doesn’t supply enough power to charge your laptop. The Thunderbolt connection costs you a little bit of read speed and cuts down the write speed by almost half, but it also hamstrings

If you were hoping for a single cable solution, you’ll have to wait for the next iteration and hope that Seagate provides that upgrade.

Beyond those two things, the FireCuda Gaming Dock does exactly what it sets out to do. It’s a fantastic dock for users with a Thunderbolt-enabled laptop. It has fast storage for latency sensitive games and doing jobs like rendering video, and the 4TB cheap and deep drive is great for holding your turn based games and raw project files and documents. It’s a good blend of hierarchical storage methodology and it looks great doing it.

Powered by an IronWolf NAS drive and an NVMe expansion slot, this dock is a fantastic high-speed hub for any Thunderbolt 3-enabled laptop. It can provide all of the connectivity you need for multiple monitors, Ethernet, USB 3.1, and more, all while remaining whisper silent and with as much or little RGB as you’d like.

Ron Burke is the Editor in Chief for Gaming Trend. Currently living in Fort Worth, Texas, Ron is an old-school gamer who enjoys CRPGs, action/adventure, platformers, music games, and has recently gotten into tabletop gaming. Ron is also a fourth degree black belt, with a Master's rank in Matsumura Seito Shōrin-ryū, Moo Duk Kwan Tang Soo Do, Universal Tang Soo Do Alliance, and International Tang Soo Do Federation. He also holds ranks in several other styles in his search to be a well-rounded fighter. Ron has been married to Gaming Trend Editor, Laura Burke, for 21 years. They have three dogs - Pazuzu (Irish Terrier), Atë, and Calliope (both Australian Kelpie/Pit Bull mixes).
Related Articles: FireCuda Gaming Dock, Hardware
Share
Tweet
Share
Submit