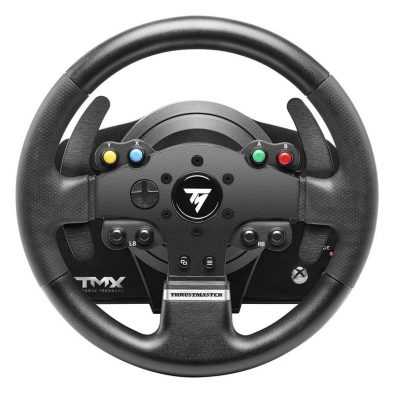 As an avid player of racing games, I always appreciated the novelty of the low-end plastic racing wheels and pedals that started becoming available as I was growing up. I look back on my days of playing Gran Turismo and Project Gotham Racing on console with my fifty dollar wheel, and remember the novelty fondly. In recent years though, racing wheels have become more and more sophisticated and can now be bought for hundreds of dollars for high-end models.

The Thrustmaster TMX Force Feedback is the first mid-range quality wheel I’ve ever owned, and having now had a significant amount of time using it, I see what I’ve been missing after all these years. With customization options, strong console support, and an impressive force feedback system, you can immediately feel the jump in quality from a controller, mouse and keyboard, or low-end racing wheel. As soon as you plug the wheel into your console, it immediately recognizes the wheel and works perfectly with a wide-range of racing games on the Xbox One (all games were compatible out of the dozen or so I tried). When it comes to PC games, the compatibility and functionality is not as comprehensive, but I was still able to get things to work (mostly) on PC.

The wheel is plastic with rubber grips, and a few metal knobs and buttons. The bumpers, a D-pad, and A, B, X and Y buttons embroider the center of the wheel, with two metal paddles behind the wheel for triggers. The base of the wheel has a clamp that attaches to most tables or desks to hold the unit in place.

The wheel connects to a plastic base with two wide pedals for the gas and brake. The pedals can be adjusted at different angles, depending on your leg length, and preferred distance from the pedals. The pedals are the least impressive part of the wheel as they feel fairly flimsy, and don’t provide a way to hold the unit in place, so an over-eager foot often leads to the pedals gliding away from the user. That said, the pedals are highly-sensitive, which provides a realistic experience during gameplay, and generally gets the job done.

The crowning feature of the TMX is the force feedback feature, which pushes and pulls against the user to simulate friction when braking at high speeds, or skidding around a corner. At first, the feature takes a lot of getting used to, and makes controlling your vehicle a volatile experience, but after a little practice you begin to master the feedback, and become immersed in an experience that’s far more exciting than anything one could hope for from a controller.

On the Xbox One, the console not only recognizes the wheel with extra effort, but features such as the force feedback, and use of the pedals work as you’d expect without issue. In some cases, games do not recognize the A,B, X and Y buttons or the D-pad when navigating menus, so I sometimes had to keep an Xbox controller nearby for the bits in-between gameplay. On PC, most games that support controllers also support the TMX, but in some cases, the force feedback features didn’t work. This doesn’t ruin the experience, but makes it comparable to a low-end racing wheel without force feedback features, and defeats the purpose of having such a high-quality peripheral.

The Thrustmaster TMX Force Feedback for Xbox One and PC is an awesome mid-tier racing wheel for those who play primarily on the Xbox One. Though support for PC isn’t as robust as console support, and the pedals tend to slide around, the TMX is an entirely enjoyable experience that I highly recommend to any racing game enthusiasts.

You know that jerk online that relentlessly trash talks you after every kill? That guy was probably Travis "Tie Guy" Northup. Competitive, snarky, and constantly wearing a tie, Travis has been writing his opinions about electronic media since he was a teenager, and is pretty much the only person to hold his opinions in high regard.
Related Articles: Thrustmaster TMX Force Feedback
Share
Tweet
Share
Submit