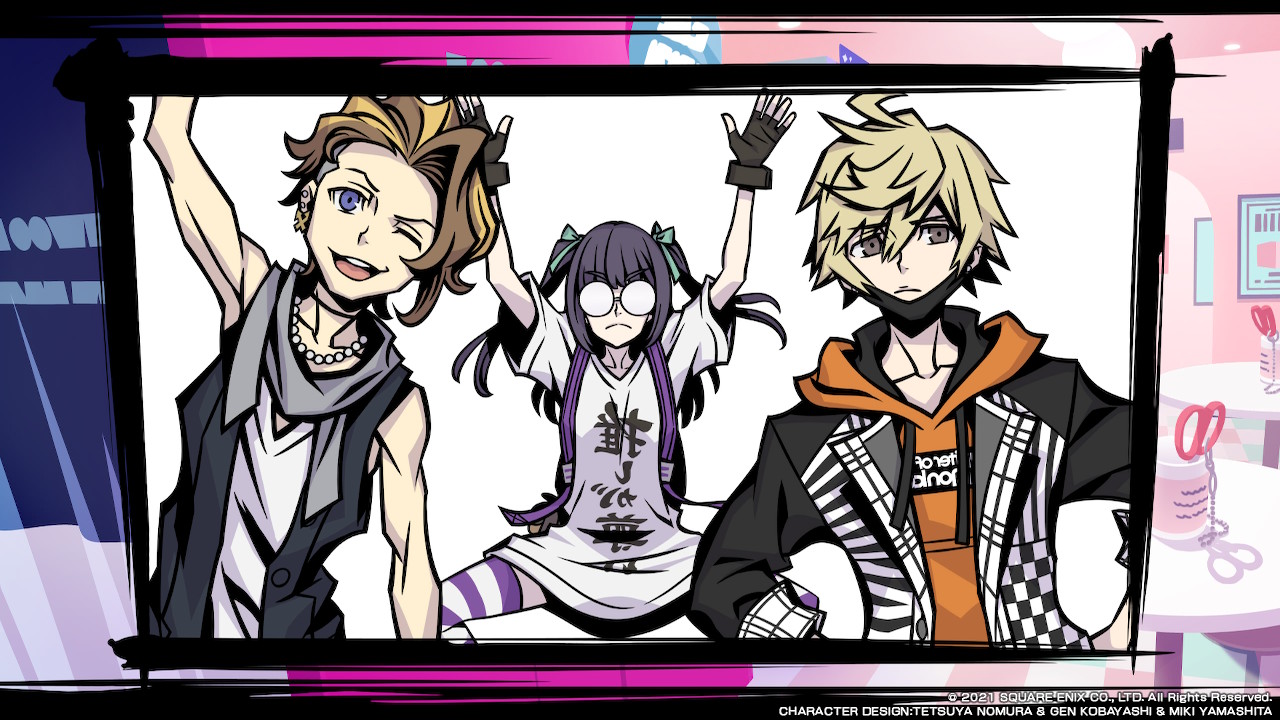 In the city of Shibuya, personalities and creeds clash on a daily basis. A high schooler named Rindo is going about his business with his best friend Fret when they’re suddenly pulled into a twisted game for their lives. The Reaper’s Game pits teams of Players against each other over seven days, where they compete in daily events to earn points. At the end of the week, the winners get their wish granted and the losers face erasure. The twist? All the Players are already dead.

The World Ends With You on the DS is one of my favorite games ever made. As an adolescent, the story and characters spoke to me on a deep level and the dual screen combat is unlike anything I’ve played before or since its release in 2007. The cult classic lay dormant for about 11 years, until an enhanced port of the mobile Solo Remix version (2012) made its way to Switch with new content teasing a sequel. Now that we’ve finally got our hands on the follow up, we can safely say it surpassed all of our expectations. 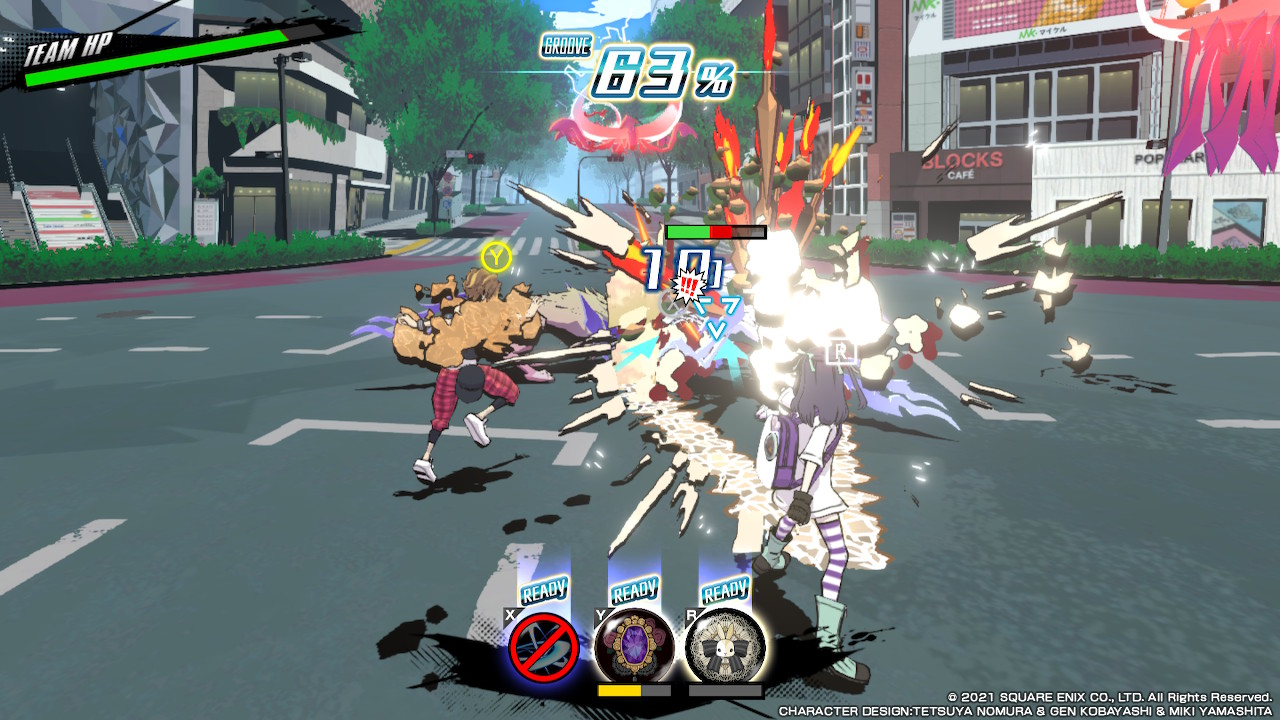 Since the story is a big highlight, we’ll refrain from talking about it too much. It’s sure to satisfy fans of the original with returning characters like the math-freak Minamimoto, and players of all backgrounds will instantly get attached to new characters like the charmingly dorky Nagi and painfully relatable Rindo. The plot has a ton of exciting twists and turns, and while it can rely on knowledge of the original and the new day added in Final Remix, those plot points are carefully explained so anyone can follow along. I was especially worried about the new stuff from Final Remix, since I never played that version, but I feel like I understand its relevance without entirely spoiling what went on in that game.

The Solo and Final Remixes reworked the combat to be playable on a single screen to admittedly mixed results, but NEO’s new system perfectly captures what made the original so engaging. Each of your party members can use a single psychic ability by equipping a pin, for example I gave Rindo a pin which allowed him to rapidly slash an enemy with a spectral sword while Fret was able to fire elemental blasts from a distance. Every pin has a button assigned to it, in this case Rindo used X and Fret used Y, and you can’t equip multiple pins of the same input (at first anyways). Pins have limited energy, so once you use one enough times it’ll enter a short reload period before you can use it again in that fight. What holds all this together is your party’s Groove, represented by a percentage at the top of the screen. Attacking will sometimes cause a Beat Drop meter to appear on an enemy and, if you attack with a different pin before time runs out, this will increase your Groove. At 100% and beyond, you can start a Mashup by pressing A which greatly multiplies your entire party’s attack power. You’ll eventually unlock Killer Remixes, which at 300% Groove sends the gang high into the air to rain down death from above. 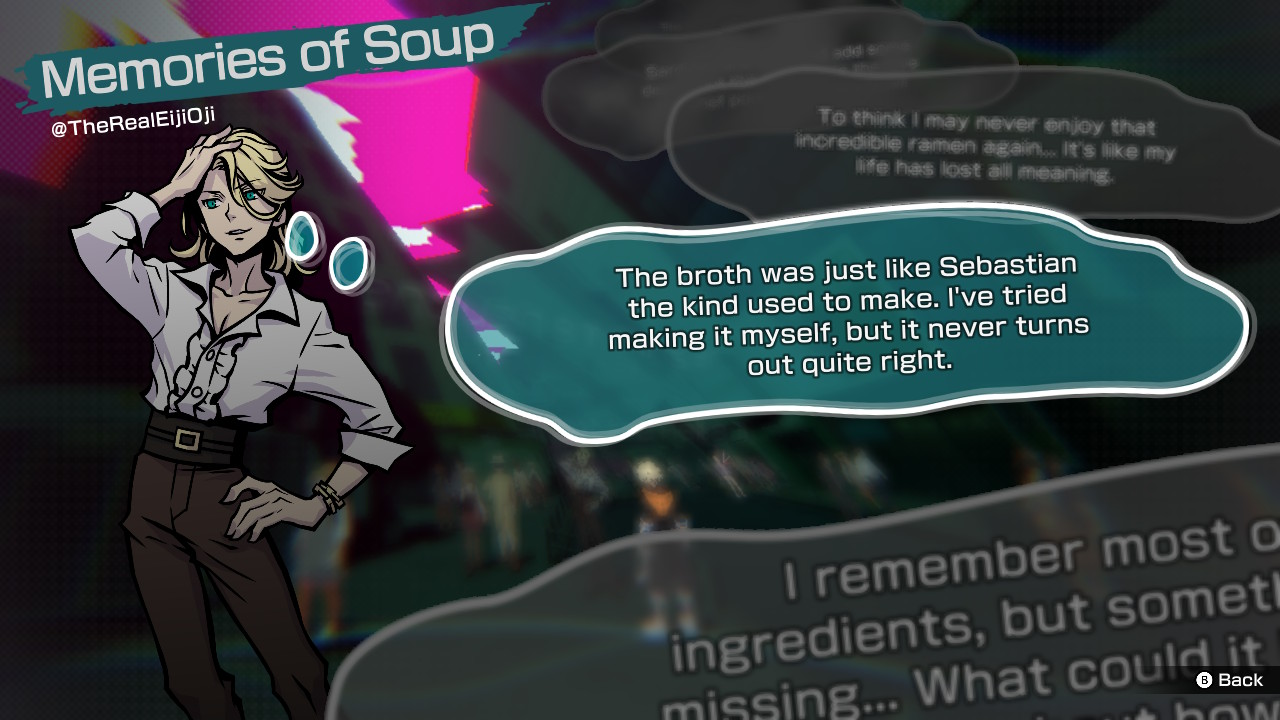 That’s all a little complicated to read but easy to grasp in practice, so let’s break it down. By spreading out attacks you gain Groove, which will eventually allow you deal a ton more damage in a burst. The more party members you have, the more pins you can use, the more potential Groove you can gain quickly. While you only start out with Rindo and Fret, once you have a full roster things can get pretty hectic. My endgame setup saw me holding ZR while mashing Y, then while those pins were on cooldown mashing X while holding and releasing L and R occasionally. Throw in the need to dodge enemy attacks with B while constantly moving around and you’ve got yourself a combat system that accurately recreates the thrilling multitasking of the original game. In fact, I find this system even more fun and satisfying than the original.

I also felt more encouraged to try new pins to level them up and see how far I could push my builds by lowering my level, increasing the difficulty, and chaining battles together to send my pin drop rate soaring into the thousands. As you explore Shibuya, you can scan by pressing R to read people’s thoughts and encounter Noise (TWEWY’s monsters) symbols that represent an encounter. If you touch multiple Noise symbols, you can chain those encounters together one after another in rounds the game calls Reductions. Unlike fighting these battles separately, your HP doesn’t refill between reductions. This risk does come with a reward though: Noise are more likely to drop new pins upon defeat the more battles you fight in a row. You can further increase this drop rate by lowering your level (which only affects your HP, not other stats) or changing up the difficulty for even rarer pins. At first, you can only chain five battles together, but using your Social Network you greatly increase that number.

As you play through the story and complete side quests specific to each day, your Social Network will expand. You can spend Friend Points (FP) to unlock bonuses attached to each friend you add. For example, if you become a regular at the local curry place, you can friend the owner to add new dishes to their menu. Since eating out is the only way to permanently increase stats aside from health, you’ll definitely want to try a variety of foods all over Shibuya. Along with being a mecca for all varieties of eateries, the city is known for its competing brands of clothing. Each party member can equip a hat, shirt, pants, shoes, and accessory to give them stat bonuses along with special abilities like regenerating HP or increased EXP and PP (pin points) if they have enough Style. Much less restrictive than Bravery in the original, Style simply determines if a particular piece of clothing’s ability will activate, it doesn’t restrict what you can wear so Rindo can absolutely rock that Gato Nero dress if you want. Wearing a brand’s clothing will also level up your relationship with them, allowing you to purchase more clothes at their stores, so make sure you switch up your look once in a while.

Speaking of looks, NEO has style up the wazoo. The cell shaded graphics look excellent, but the fish eye lens look of the fixed camera angles in each area really makes it look unique with buildings almost literally leaning over you in the distance. While the game targets 60 frames per second and the PS4 version probably stays there consistently, we actually found the occasional frame drops of the Switch version to only add to the anime aesthetic rather than detract from the gameplay experience. It’s a strange phenomenon you really need to see to believe, but the technical limitations of the little console that could somehow only serve to make NEO look even better. The game runs comparably both in docked and handheld mode, though it is easier to see the aliasing in portable mode with the lower resolution but I find the portability is worth it. 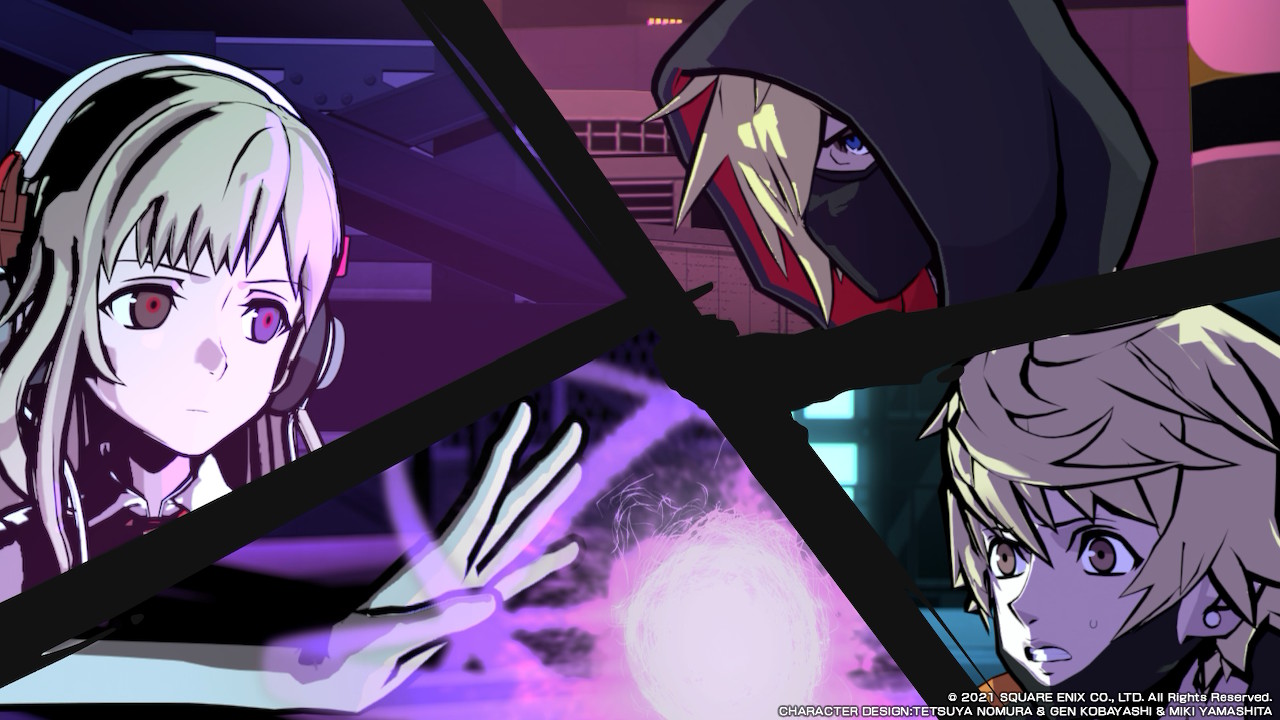 If you are playing in portable mode though, be sure to use headphones because the soundtrack is a banger. While there are a few returning songs, like the iconic Twister, most tracks are either entirely new or remixes from the original. Out of the 51 songs in the game, there is exactly one I didn’t like, that being Scramble. The voice acting that occurs in the scenes beginning and ending each day is also above average, though there were a few lines that sounded odd or disingenuous. I’d chalk it up to pandemic issues, but one or two reads sounded like they chose the worst possible take they had. Still, those are few and far between and don’t detract from the story.

NEO: The World Ends with You

NEO: The World Ends With You captures everything that made the original special and surpasses it in every way. With a great story and incredibly addicting combat, players joining the Reaper’s Game will be hooked from start to finish and beyond.

David is the kind of person to wear his heart on his sleeve. He can find positives in anything, like this is a person who loved Star Fox Zero to death. You’ll see him playing all kinds of games: AAAs, Indies, game jam games, games of all genres, and writing about them! Here. On this website. When not writing or playing games, you can find David making music, games, or enjoying a good book. David’s favorite games include NieR: Automata, Mother 3, and Gravity Rush.
Related Articles: NEO: The World Ends with You
Share
Tweet
Share
Submit