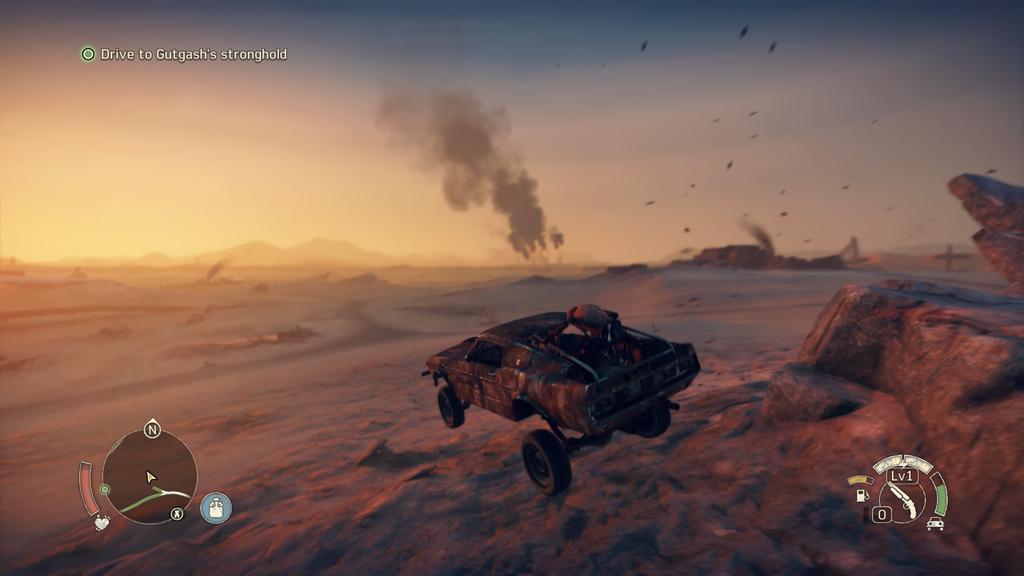 Open-world video games have been very prevalent in the past few years. They are a great way to bring life to a bustling world to quickly entrench the player. One of the newest games to hop onto the open-world train is Mad Max, developed by Avalanche Studios, who you may know as the guys behind the Just Cause franchise. In Mad Max’s case, the open-world is a dusty wasteland, meaning that inserting life into every nook and cranny is an unrealistic task. So how do you simultaneously build a world, yet establish that this world is filled with hazy corners of pure nothingness?

For starters, having a strong visual style is very helpful. Within the first few hours of Mad Max, you are introduced to the desolate world that your main character, Max, inhabits. It is one filled with open space, sand, and the occasional building constructed from old, second-hand parts. Sitting back and enjoying the sights of Mad Max’s world is something that never gets old, whether it is peering into the abyss that is Gas Town (a stronghold featuring numerous pipes that constantly shoot fire into the air) from afar, or just cruising along the dunes and seeing small debris fly across the screen. The visual design of Mad Max is without a doubt the best thing about the game.

Gas Town is a sight to behold

The attention to detail spreads from the environment to the vehicles you find littered across the wasteland. Vehicles are huge parts of the Mad Max lore, crafted purely out of random welded metal, with very little creativity. Most vehicles look like mishmashes of whatever parts the creator could find nearby, no matter how aesthetically pleasing. That comes across in Mad Max, as the mechanical nature of every moving death machine is visible. There are also a good variety of designs to be seen across the different factions, so running into the same car throughout the game is quite difficult.

Unfortunately, the impressive visuals come to a screeching halt multiple times as horrendous frame rate issues plague Mad Max. Some of the more intense moments in Mad Max feature explosions, cars speeding along, and dust being slung every which way. This combination of hubbub is something that can send Mad Max’s frame-rate spiraling downwards. This type of issue is especially noticeable when launching the game after awakening your PlayStation 4 from rest mode. For a game with such strong visuals, having them occasionally dragged down by frame rate is an incredible disappointment.

One thing that inconsistent frame rate cannot slow down is the character design, which is disgustingly detailed, but appropriately so. Max runs into a variety of personalities throughout his adventure, a majority of which feature interesting stories to tell. Easily the best is Chumbucket, your friendly hunchback buddy that you meet rather quickly. He acts as a passenger as you drive around the wasteland, launching harpoons and other weapons at whatever you direct him towards. He falls in love with the Magnum Opus, the car you and he assemble upon meeting each other. He begins to look at Max as a saint, and the Magnum Opus as his baby. His character arc is the best found within the game, and features some good laughs, as well as a lot of heartbreak.

Driving off a cliff is recommended

While Chumbucket is an expertly designed, lovable character, Max is the opposite. The character of Max has been portrayed (most recently in Mad Max: Fury Road) as one with little to no emotion. The lack of emotion is felt, but that does not stop the story from constantly trying to remind you of his dead family. They make numerous reminders to what Max has lost, which never brings about any attachment to the player because Max just shrugs it off as if nothing happened. If your main character is not affected emotionally, why keep drawing comparisons to his past? The family-related narrative does play a part in some of the late game, but it never feels as emotionally strong as the game is wanting. Any story-related stuff involving Max just feels like the game is begging you to care for Max and his emotionless, gruff face.

The character gets worse as you have to hear him utter painful lines of dialogue. The writing, in particular, is not atrocious; the problem is more in the delivery of voice actor Bren Foster. Foster is an Australian native, which is very noticeable at times, and not so at others. Occasionally, Max seems purely Australian, whereas at other times it feels like he is going for a deep, strong American tone. It blends together to make some laughably bad lines of dialogue. This issue only persists in Max, as the other voice work is rather solid.

The motivations of your protagonist are blurry from the beginning of Mad Max. At first, it seems like he just wants to construct the Magnus Opus. But after that, his sights are set on Gas Town, where at the same time he wants to take out Scabrous Scrotus, the leader of the piece of land you are traversing across. Scrotus is hated by many, and is also the son of Immortan Joe, the antagonist of Mad Max: Fury Road. This hazy directive makes following any kind of through line rather tough, which may be for the best as Mad Max is at its strongest when you are causing pure chaos and ignoring your surroundings.

The best way to bring about this chaos is to ride around in the Magnum Opus, setting your sights on whatever comes in your way. The vehicle that will remain at your side throughout your time with Mad Max is the focus of multiple upgrades that will help its performance in both speed and the damage it does to enemies. Early on, you get a harpoon, which becomes very useful in the vehicular combat. The biggest (and funniest) use involves you ordering Chumbucket to shoot a harpoon at the driver of a nearby vehicle; you then pull him out and launch him high into the air. This type of silliness is what can make the combat enjoyable — who doesn’t enjoy accidentally leading a car off the side of a cliff, only to watch him crash and burn?

That enjoyment does get lessened when you must do specific things to take out vehicles. It gives a more focused approach to the combat, but it does not help the player as fumbling through weapons and ramming into other cars only to achieve minimal damage is never fun. The actual controls of the vehicles can feel all over the place. Some can be tight, while some can be very loose depending on the car’s stats. At the end of the day, the movement is perfectly tolerable, and the combat does provide a few highs, but it mostly acts as a means to just getting to the next mission.

The Magnum Opus can shape up quite nicely

Outside of the vehicle, hand-to-hand combat is very similar to many open-world games, where you perform quick strikes and wait until the opponent attacks. Once they attack, a button prompt pops up to counter; you do so and wait until the next opportunity. While the basic premise of this system is perfectly fine, and was incredible when first introduced, it has become incredibly tired. There is very little innovation to the mechanic within Mad Max, apart from some sprinkled in wrestling moves. On top of that, the timing can feel slightly odd, due to being locked in animations. There were more than a few times during my playthrough where Max would perform an elaborate move featuring a prolonged animation. During this animation, an enemy would attack and connect, because Max refused to break the animation to counter. Similar to the vehicle, there are upgrades to unlock that will make Max stronger, but they never make the combat feel much different. Not only is it a copy of a combat system we have seen recreated ten times over, it is a lousy interpretation on top of that.

Creating a host of missions in an open-world game is a very difficult task to do. You must cultivate a variety of objectives for your player, all while making them fit into your world. It feels like Mad Max takes that and throws it all to the side in favor of what would be the simplest thing to get Max to the next mission. Throughout the near 30-hour playthrough of Mad Max, the first half of the missions ran through a basic concept. Max must talk to person > Person wants Max to retrieve something before he gets what he wants > Max retrieves thing > Max gets thing from person, continues on to next character. As you get closer to the end, the game begins forcing you to perform side missions in order to progress the main story, which can be the laziest padding possible. The worst part is, Mad Max did not need any padding. It goes on way too long, and features a countless number of times where you sit back and think “well, this is the last mission, right?”  Then, as you get closer to the end, the game forces you to go out and collect a certain amount of resources, or do something for a certain stronghold you have inhabited. Not only does it extend an already overlong game, it just makes the player more and more frustrated. The mission structure of Mad Max is a boring, lazy, frustrating mess that seeks to push the player further away from the game at every acceptance of a quest.

The world of Mad Max is a wonderful and interesting one. It features a host of characters that can be very enjoyable to follow. They have great designs, and, in the case of some, even better character narratives. But the meat surrounding Mad Max feels derivative and tired. The mission structure constantly disappoints, and the hand-to-hand combat provides no thrills. If it were released five years ago, Mad Max could have been revolutionary. But it was released in 2015, so Mad Max will be just another open-world adventure lost in the dust.