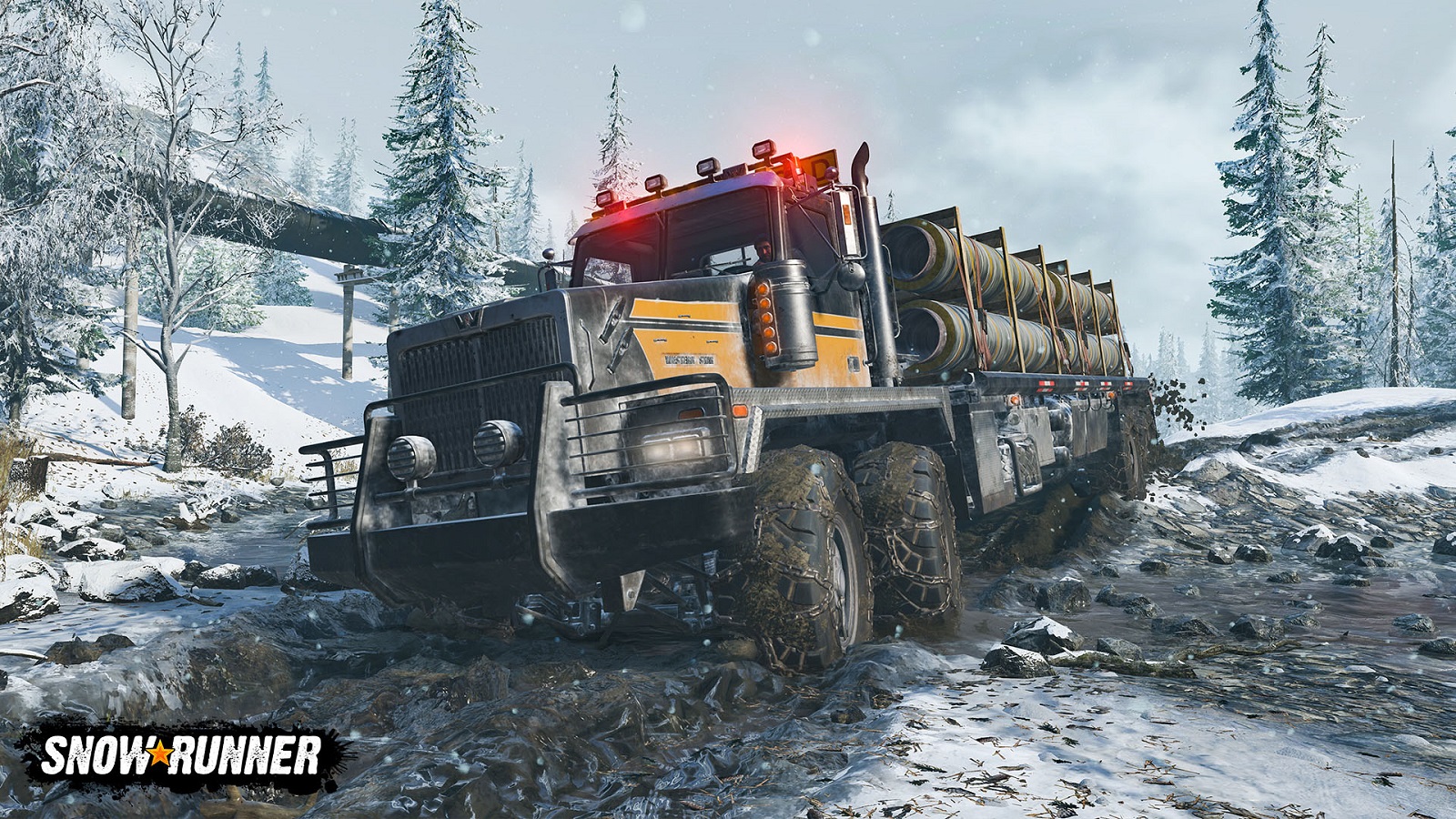 Back in April 2020 I reviewed and subsequently became somewhat enamored with SnowRunner on the Xbox One platform from Focus Home Interactive. There’s just something highly rewarding about slowly hauling a consignment of logs, bricks or whatever other cargo happens to be the order of the day over mud, through snow and running water, having to winch yourself out of a swamp inch by inch, and just praying that you planned your route well enough to make it to the delivery target and that your vehicle is up to the task.

Now a year later, Nintendo Switch players can finally hop into the driver’s seat and experience the often slow but nonetheless gripping fun that is SnowRunner in all of its frosty glory, except now in the convenient portable format offered by Nintendo’s console. I’ll try not to dwell too much here on the actual gameplay aspects of SnowRunner as we covered much of that in the original review here. Something I feel I should rephrase or expand upon though is when I said “The pace of SnowRunner is something I found very relaxing”, that isn’t entirely accurate. It’s not so much that it’s a relaxing experience, at times I actually find it a bit nail biting when I’m slowly weaving around a mucky, slippery mountain pass with a sheer drop on one side just hoping I can make it around without plunging off into oblivion. No, that does get somewhat tense but the thing is, I have never felt the urge to rage-quit when I’ve screwed up and gotten myself well and truly stuck. If anything I’ve only ever felt more driven to come back and beat a challenge. 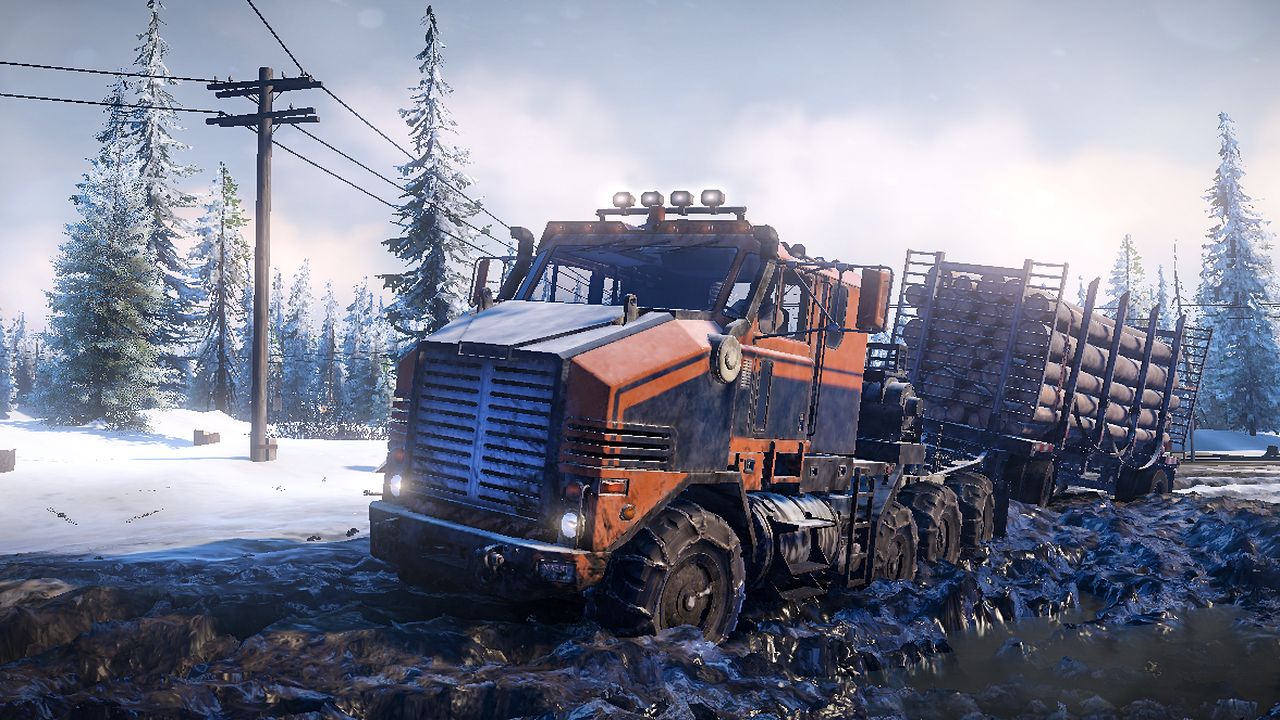 The good news is that the Switch port does indeed deliver the goods and it does arrive more or less intact. There have been a few sacrifices made to bring SnowRunner over to Nintendo’s console but Saber Interactive have, in my opinion, done a pretty good job getting everything squished into the small screen. Nintendo Switch owners will probably know what to expect by now but playing SnowRunner with the Switch’s portable benefits comes at the cost of overall graphic fidelity. Don’t take that the wrong way, this is still a good looking game but compared to versions on other consoles it’s clear that sacrifices had to be made.

Textures seem to be the most apparent downgrade with rock surfaces and the like losing detail and clarity, particularly when playing in docked mode on the big screen. There also seems to be a considerable amount more aliasing going on with the Switch version than is present in other versions. Pretty standard stuff for Switch ports by now but what I can say is that somehow these visual downgrades don’t seem all that glaring; consider the general mucky, gritty look of SnowRunner and these downgrades sort of melt away into the background. I certainly wasn’t disappointed with the Switch visuals and it must be said that handheld mode does look really rather clean indeed! 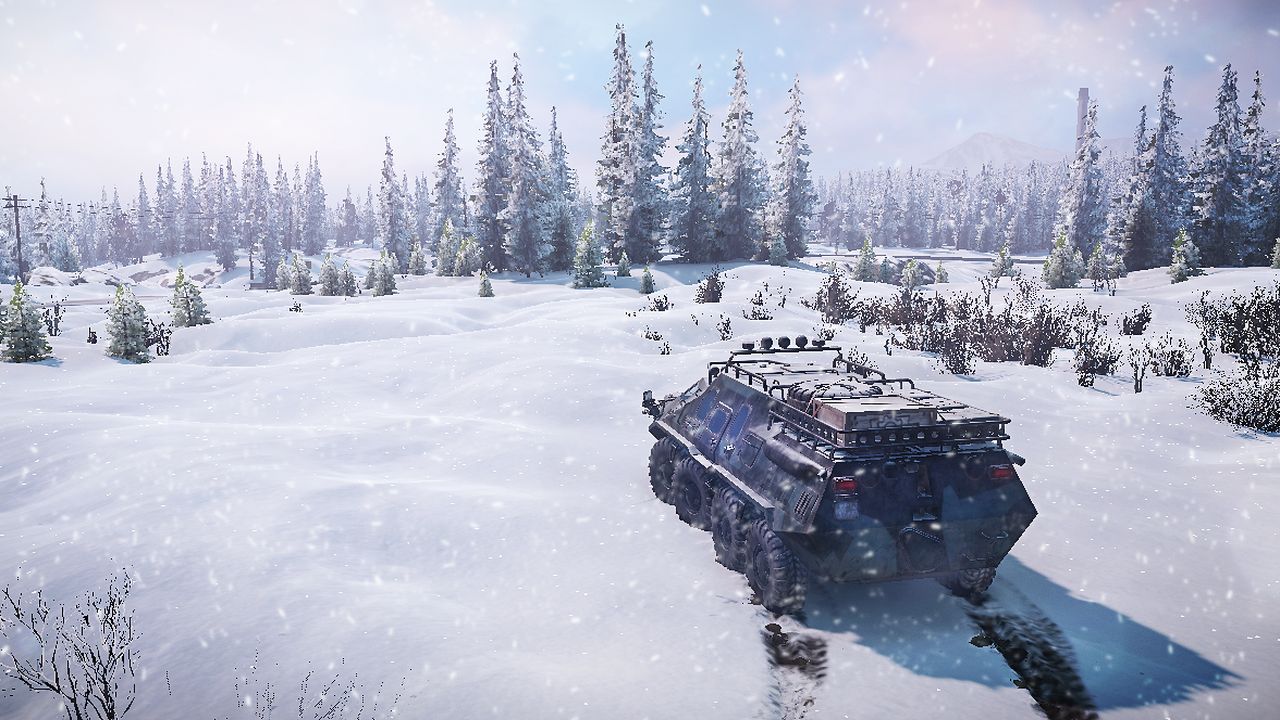 Thankfully the frame rate on the Switch port is nice and steady. This was the main concern I had before getting my hands on the Switch version of SnowRunner, I just expected it to be pretty choppy. I need not have feared, the end product appears smooth and consistent throughout either in docked or handheld modes, with only minor and brief drops in places during my own playtime and certainly nothing that impacted my enjoyment of the game at all. Draw distances on the other hand do seem to be reduced, or rather the amount of detail drawn in the distance, there being less distant trees and the like present on the Switch. If you’re looking for it, you can also see pop up occurring as you drive around the landscape with bits of vegetation and debris being drawn in where it may not have been on other platforms.

The Switch version of SnowRunner does lose out on analog triggers for throttle control however, that’s Nintendo’s fault and absolutely not the developers but I felt I should bring it up. I mentioned in the original review that you cannot just get on the throttle and hope for the best, often you’ll end up just digging yourself into an even deeper hole by doing that. Luckily there is a control scheme included that maps throttle to up and down on the left analog stick which isn’t perfect but given the total lack of analog triggers on the Switch, it’s probably the best solution possible and it’s totally doable. I would really have liked to have seen a gyro operated head look option included but sadly it wasn’t to be. Still, you can’t miss a place you’ve never been.

Overall I am really pleased to have SnowRunner on Nintendo Switch, it’s an awesome game which I would have scored higher originally if I had put in the playtime then that I now have a year further on and now it’s on my preferred platform on the big screen, in bed, on the train or indeed available if I should find myself trapped in my car, stuck in a muddy ditch in real life. This is a solid port or a solid game, very little is lost in translation to the portable console and I’m going to be sinking a ton more time into SnowRunner all over again!

An excellent and very welcome port of an already great and addictive game that stands out among other games in the genre.

Grumpy gamer from UK with a keen interest in retro gaming and modding. Can also be found cycling up and down mountains, walking dogs, watching Sci-Fi and reading all sorts of books.
Related Articles: SnowRunner
Share
Tweet
Share
Submit