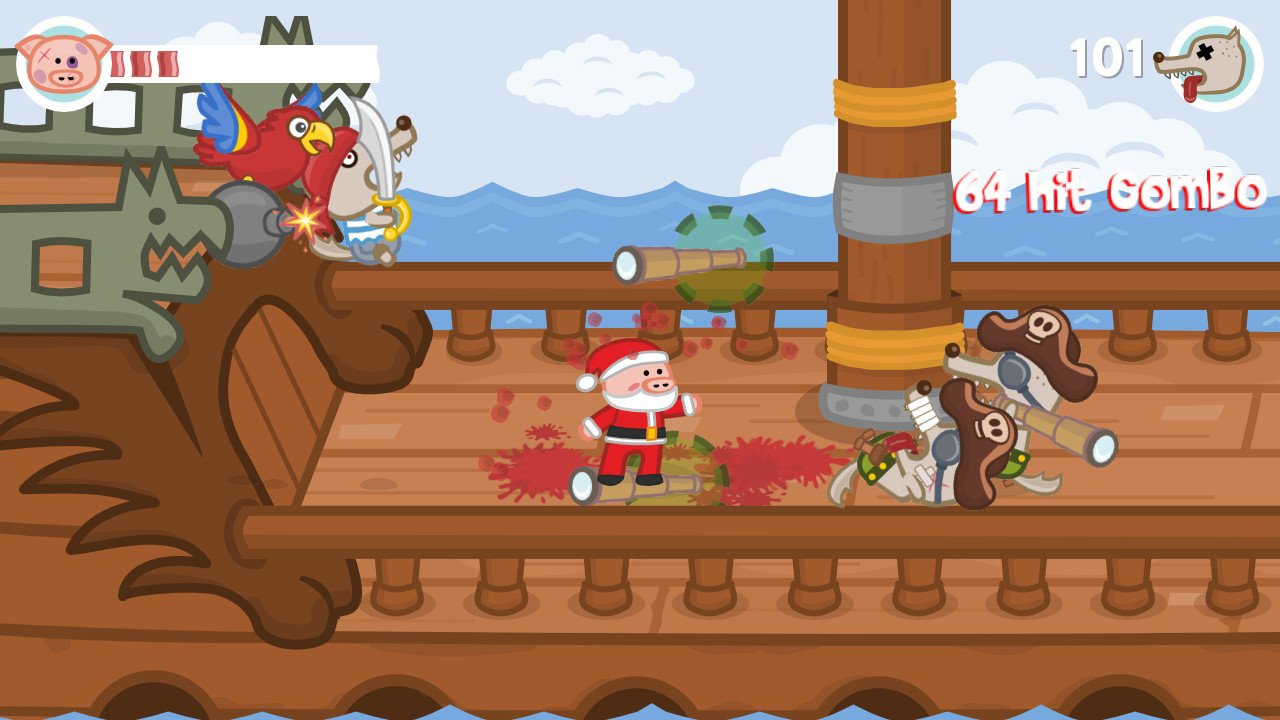 I’ve been digging pick-up-and-play time wasters, if my recent reviews for Switch ‘N’ Shoot and Timberman Vs are any indication. A handheld console like the Switch is perfect for games lasting mere minutes, and Ratalaika Games has released Iron Snout, a hopeful contender in the microgame genre. While it’s a bit sloppy in quality, the game is an adequate little title that you can play in between rounds of Smash and Super Mario Odyssey. 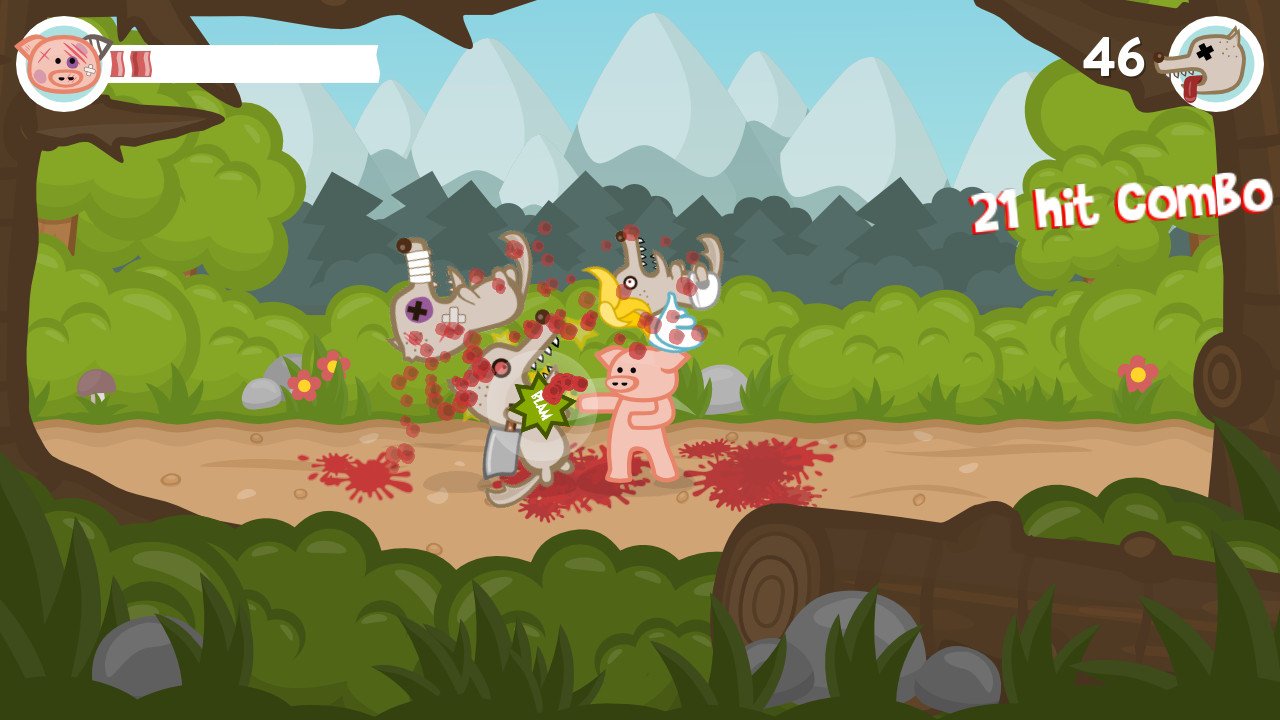 Iron Snout has you control a lone pig as you destroy endless waves of wolves and other animals that want to destroy you. You’re placed in the center, and even though you’re stationary, you can hit any of the face buttons to attack as well as duck and jump. As enemies enter the screen, you’ll have to dodge and dole out damage as quickly and bloodily as possible. You can also use weapons that enemies drop to beat your opponents, from swords and knives to skateboards and even purses. However, if you lose all of your life (indicated by a health bar above the screen), it’s game over for you. What I do appreciate about the game is how simple it is to get into the experience and fight. You can string together combos by repeatedly hitting buttons and mowing down enemies, and it’s relatively easy to beat up baddies.

While it doesn’t get more comprehensive than that, for what it’s worth, Iron Snout does what it wants to do proficiently. It also has a very tongue-in-cheek air to itself, as the game is filled with gratuitous gore. However, as a T-rated title, it’s silly and cartoony (much like the 2000s action title Alien Hominid) rather than hyper-realistic like Mortal Kombat. I did appreciate enemy variety, as they match the silly atmosphere of the game. I did let out a chuckle after fighting a Miley Cyrus-inspired wolf who was riding a wrecking ball, and some of the other opponents were humorous as well. The enemies feel like Rabbids or Minions, with the sole difference being the fact that you can decapitate them. 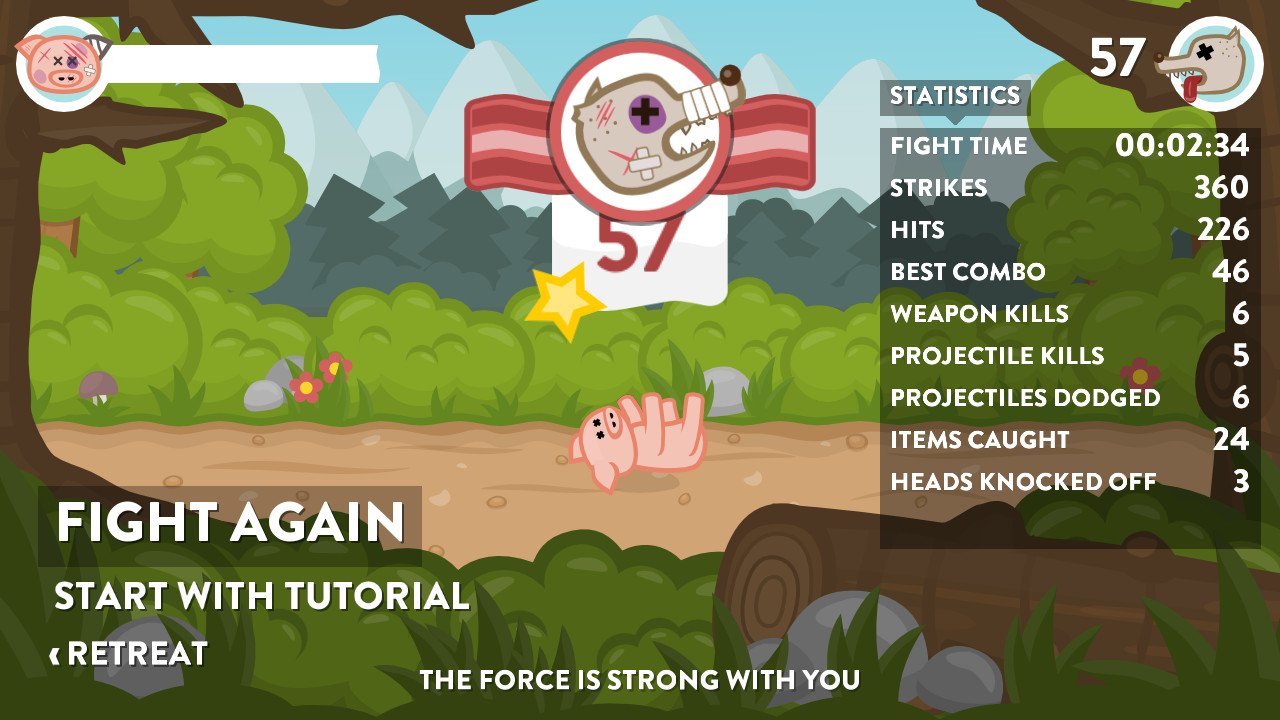 One other thing I liked about this game is the amount of unlockables in this $5 title. You have three main stages, each with their own variety of enemies to dispatch as well as a few different modes (from a classic endless to a sudden death brawl). Hitting certain milestones in-game will also unlock different costumes that you can use to dress up your piggie, so you can spend a while here if you so choose.

The biggest problem is that Iron Snout feels like a mobile game. Normally I don’t mind mobile ports (I quite liked Implosion and Timberman Vs), but the presentation and main gameplay feel very barebones. It’s simple and accessible, don’t get me wrong, but at the same time it can get old pretty quickly. Unlike something like Switch ‘N’ Shoot, where I had the desire to go again almost immediately after I died, with this game it felt like one or two attempts was satisfying enough for me to quit and head out. The graphics fit well with the theme of the game, but at the same time aren’t too pleasing to look at for more than a few minutes at a time. 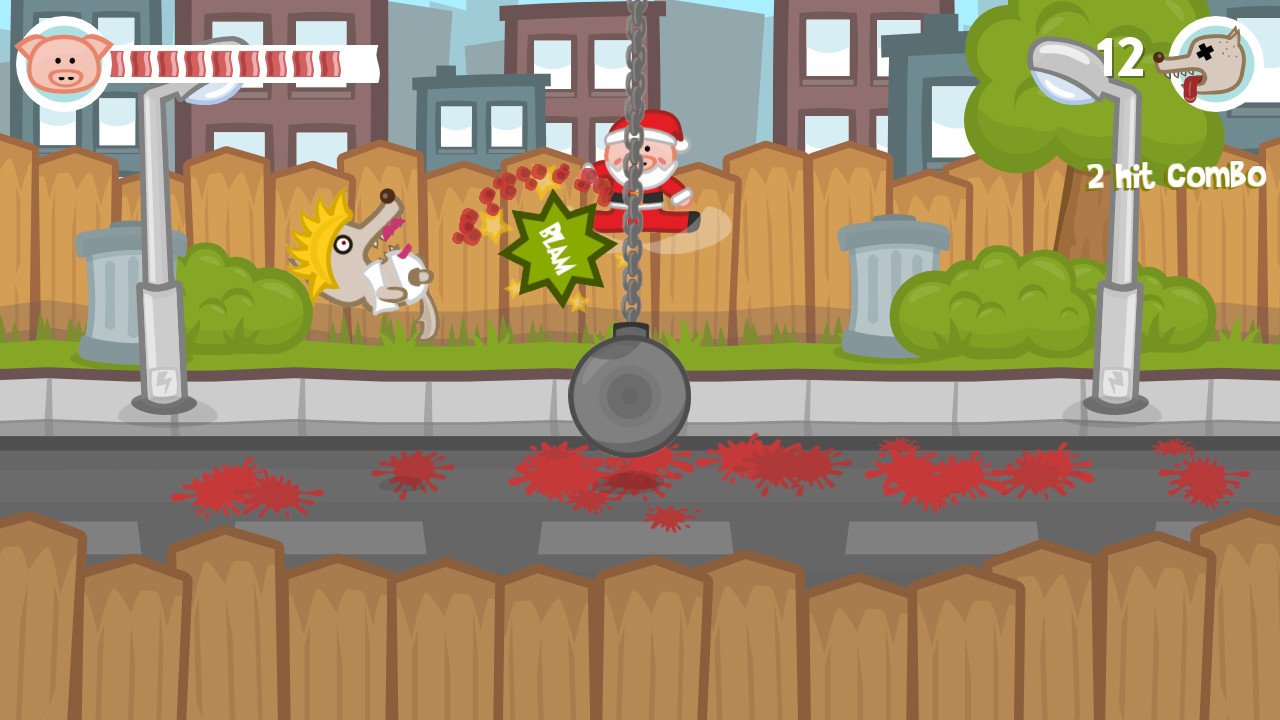 Additionally, the hit detection feels clunky and rather uninspired, as there were a few times where I swore I hit the enemy but ended up taking damage instead. Because I couldn’t move, I felt like there were some cheap shots in trying to reach an enemy only to whiff because I didn’t have a weapon or because my legs or arms weren’t too long. I wish there were a way to move about, since it would feel like a genuine beat-em-up if that were the case.

While it might not have enough staying power to keep you going for long periods of time, Iron Snout is still a functional title that has a tongue-in-cheek satirical style. It’s great for extremely short bursts, but nothing more.

Elisha Deogracias is an aspiring accountant by day, freelance writer by night. Before writing for Gaming Trend, he had a small gig on the now defunct Examiner. When not being a third wheel with his best friends on dates or yearning for some closure on Pushing Daisies, he's busy catching up on shonen manga and wacky rhythm games. Mains R.O.B. in Smash. Still doesn't know if he's a kid or a squid.
Related Articles: Indies, Iron Snout
Share
Tweet
Share
Submit