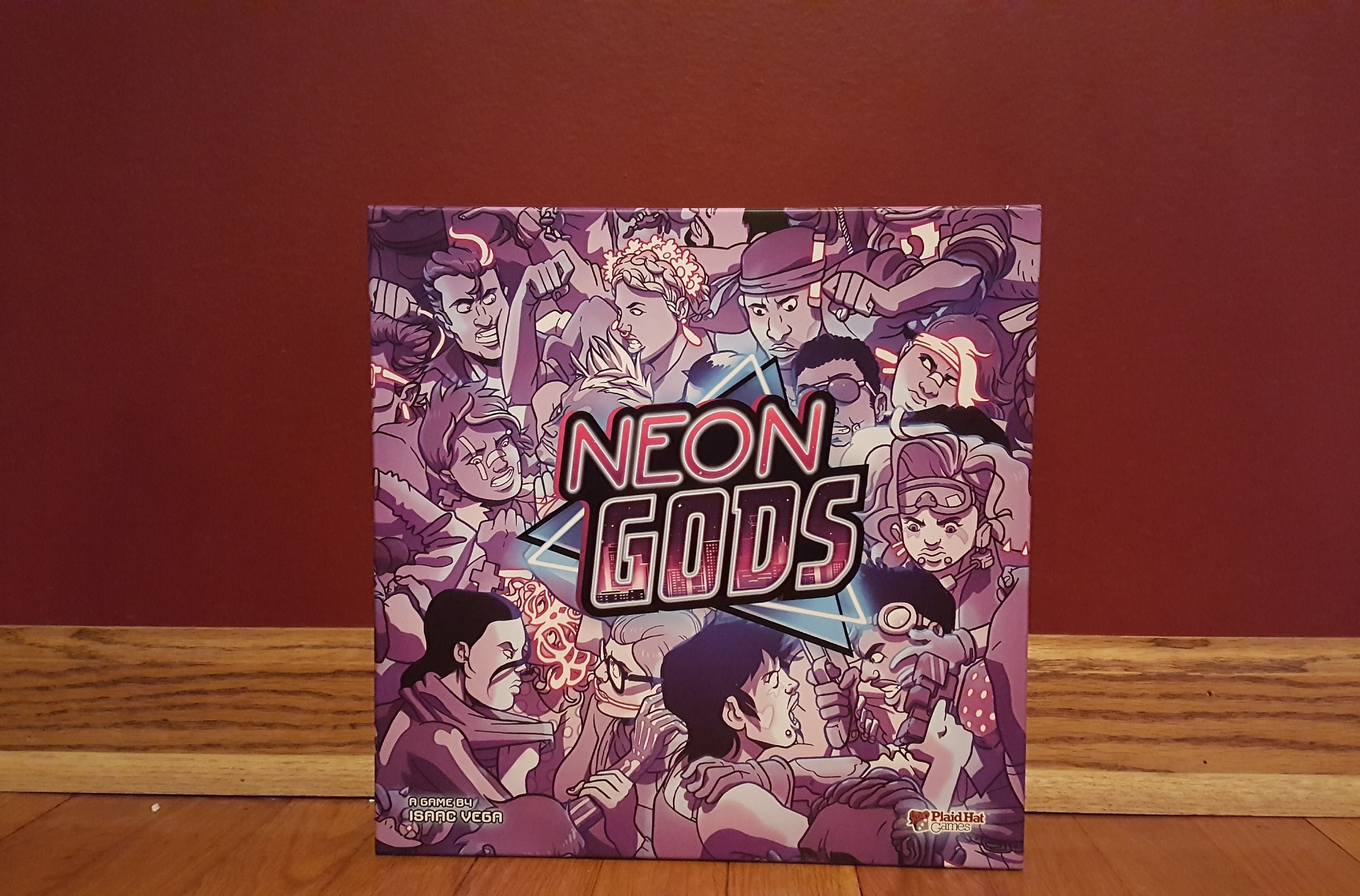 Gang wars have been the focus of many movies, shows, and games over the years. Neon Gods follows suit as it takes this concept to the tabletop format and portrays that tension in an entertaining way. Get ready to venture out from your base and slowly take control of the surrounding city through various means. Neon Gods is a mixture of area control and deckbuilding, wherein your deck will help inform your ability to make an economically viable gang.

Neon Gods can be played with two to four players, all fighting for control of the city board. The board is a six by six square, with each square representing a city block. Depending on how many people are playing and how difficult you want the game to be, there are several pre-made setups in the back of the rulebook. There’s even one specifically designed for first timers. Each scenario shows what squares will have dead zone tiles, which ones will have Andy tokens, which ones will have skyscraper tokens, and where tunnels should be placed.

Each player chooses a gang to represent, each with their own brightly colored figures, gang board, blurp token, and starting members. Every gang is the same, the only differences being names and colors. Players have a starting deck made of their designated colored members. Everyone places their blurp token on the star space on the board. As the game goes on and players earn blurp (the victory points of the game), their tokens will move along the numbers on the outside of the board. You then shuffle the market deck and draw four cards, setting aside any event cards in place of members, which you can purchase to build up your deck. After you place four members in the $0, $1, $3, and $5 spots, you have created the game’s opening market. The last step is placing six figures on each person’s base and giving $5 to every player. 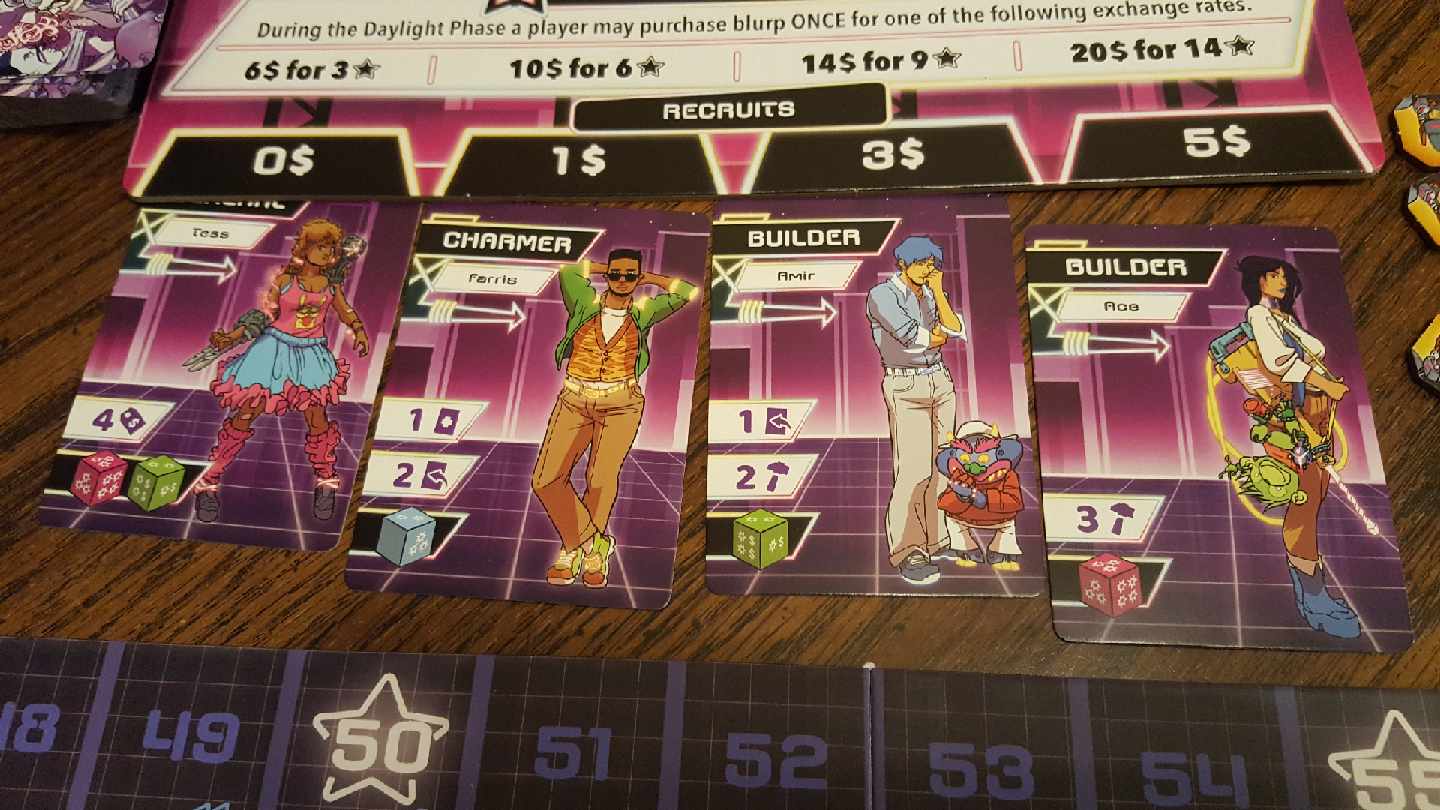 Players draw five cards for their starting hand. During their turn, a player can perform the following actions in order: draw a card, then recruit from the market or draw another card, move up to two figures up to three spaces, activate three card effects, and finally resolve any contested spaces with battles. As stated earlier, the market has you put cards under the $0, $1, $3, and $5 value spots. You can buy one card from the market per turn as long as you have the money for it. If it’s a member, it goes to your hand, but if it’s an event card, it activates immediately. The event cards are fascinating, with effects like stealing a gang member from an opponent’s discard pile or placing owl tokens on a space an opponent is occupying. The event cards feel like you’re playing dirty sometimes, which is cool since it fits the theme of gang wars. They’re easy to read, understand, and activate. The market cards slide to the left towards the lower cost to fill the gap; another card is drawn from the deck and placed in the $5 spot. If you choose to move two figures, you can move them independently of each other. They don’t have to go to the same spaces, but they can’t move diagonally. Also, if any of your figures land on a space containing an opponent’s figure or an Andy token, they must stop there. This becomes a battle to be resolved later.

If you choose to activate three cards, you can either activate their effects or draw a card instead of activation. It’s pretty handy if you don’t have many cards and want to build your hand up a bit more. Every member has one or more symbols near the bottom left of their card, and each symbol has a number next to it. These symbols signify what action they can perform and the number shows how many times they can do it during the turn. Symbols include four arrows, a hammer, a dollar sign, a card with an arrow on it, a card with a plus sign on it, and a price tag. The arrows allow you to move a figure an extra number of spaces, the hammer lets you complete building projects, the dollar sign gives you move from the supply, the arrow card lets you draw cards, the plus sign card lets you recover cards from your discard pile, and the price tag allows you to sell some product that you’ve created.

Building projects come in four different forms: building factories, building watchtowers, building monuments, and creating product. Each structure has a hammer requirement, which you can generate from member cards, and a cost in money. Product on the other hand only has a hammer requirement. Factories make it possible to create product that can be sold later, and also give bonus blurp during the final daylight phase of the game (More on blurp and daylight phases later). Watchtowers give combat bonuses to the player who controls that space and adjacent spaces when they are doing battle there. Monuments reward the player with bonus blurp during each daylight phase. You can only build one of each structure on a single space, but can’t build anything on dead zone spaces. You’ll definitely want to build some structures in order to make some good money and bolster your defenses. Be careful though, because whoever controls a space controls the structures there. You may have built that factory, but if your friend takes that tile over, then that factory is theirs for the time being.

Now, the final part of a player’s turn: battles. If any spaces are contested, both participating players choose up to three cards to use and place them face down. Players reveal all cards at the same time and compare the dice pictured in the bottom left of each member’s card. There are three kinds of dice: pink dice that focus on power, blue dice that have weaker power, and green dice that balance power and earning money. Each member uses different dice depending on their class and function. For example, warriors use pink, bandits use green, and doctors use blue. Both players roll the designated dice and compare the results; whoever has the highest attack total wins. If you’ve rolled green dice and rolled any dollar signs, you take that many coins from your opponent. It’s almost like adding insult to injury by stealing their money. After the fight, the loser must take all figures they currently have on that space and put them back at their base. The winner then gains or keeps control of that contested space and earns a blurp. Battles are typically tense because the difference between winning and losing is just a roll of the dice. At the same time, knowing your team has an overpowering advantage fills you with confidence for that battle; the only downside is knowing those tough members will be gone for awhile. 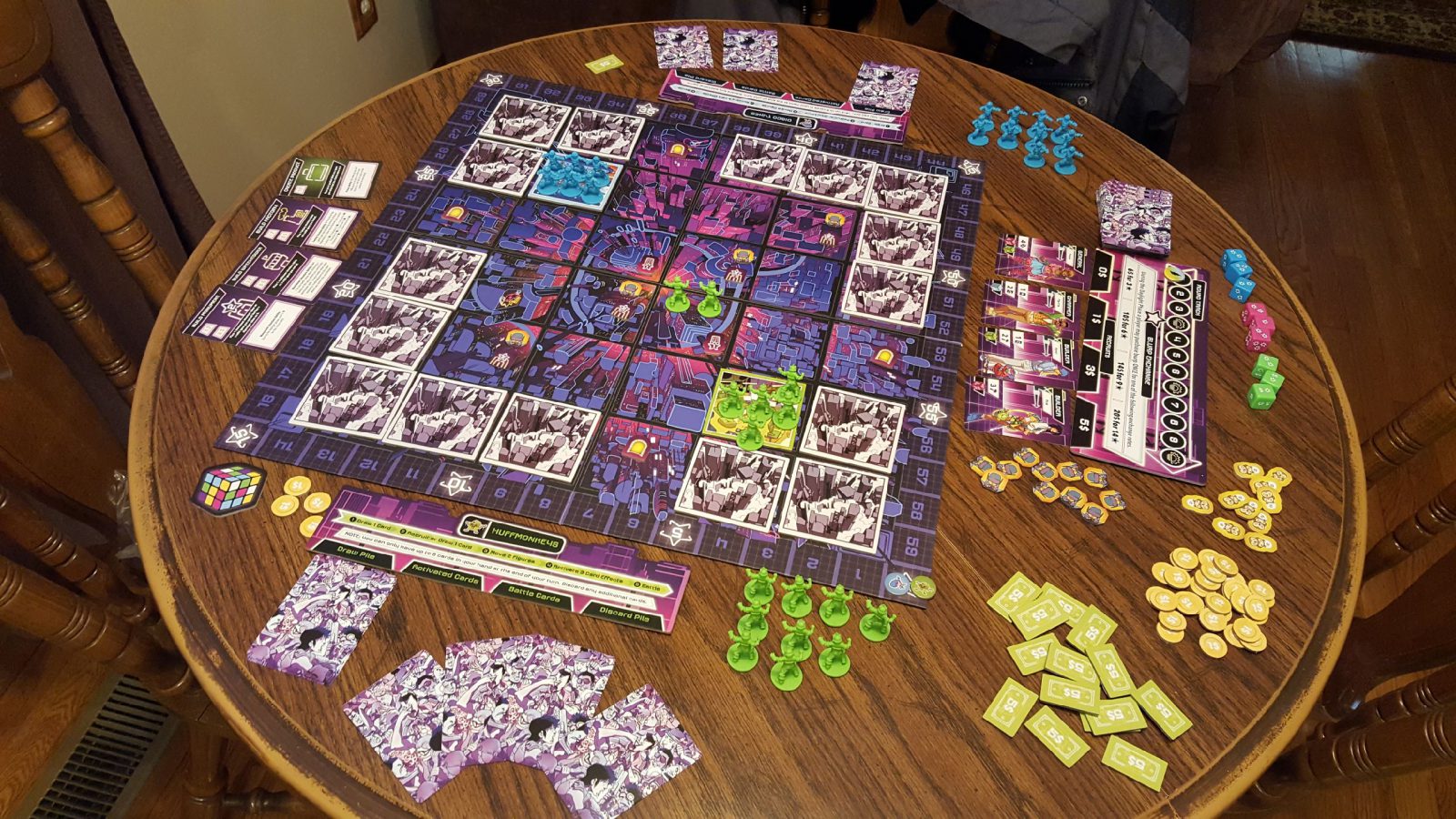 Besides other players, Andy tokens are your other enemies. These represent android police officers that stand in the way of your gang’s goals. If you land on a space with an Andy Token, you must do battle with it at the end of the turn. The Andy token is flipped over, revealing its combat value. Just like with normal battles, the player can choose up to three members to fight with. You roll your dice and if your total is higher than the Andy token’s value, you win the battle. The Andy token is discarded, the player obtains that space, and they also earn a blurp.

The objective of the game is to earn the most blurp by the end of the nine rounds and three daylight phases. You play three rounds as stated above, then the daylight phase happens. The daylight phase is a short break where players tally up how much blurp they’ve earned after the recent three nights. Each player earns one blurp per space they control, plus one or more blurp for each monument and skyscraper on a space they control. You can also spend money to buy extra blurp, with the costs and values laid out on the market board. Blurp can only be purchased during the daylight phases, so think carefully. After everyone is done updating their blurp values, the next set of nights continue. This is repeated until the third daylight phase is completed. Keeping track of your blurp is very easy, which I appreciated since there’s a fair amount of other aspects to keep track of.

The gameplay is pretty fluid and easy to understand once you play a few turns. The rules and actions are laid out clearly and I didn’t feel lost at all. The game can get more chaotic and complex with more players since there are more obstacles to worry about, but that’s part of the fun. The design of all of the pieces in the game is remarkable. They truly live up to the name “Neon Gods.” There are so many bright, flashy colors and it captures that feeling of neon lights. I do wish that the figures had more variation than just being the same figures in different colors. A few differences would have fit the rest of the game’s design better. The members themselves are cool too; there are a host of unique, quirky characters that each feel like they’re their own person. Sure, the starting members are the same for each team, but that’s to make things more fair and equal. Every time I discovered a new member, I couldn’t help but stop to take a look at what made them different. In other words, the art style and set pieces are wonderful. So if you’re looking for a tabletop experience that lets you lead some quirky gang members on a quest to stake your claim, then Neon Gods might be the game for you.

Neon Gods takes the concept of gang wars and gives it a colorful neon feel. The game flows smoothly and is fairly intuitive. The set pieces are wonderful, but a bit more variety for figures would be nice.

Codi loves to play video games and watch movies. He will watch almost any kind of movie just to experience them. His ideas take inspiration from the shows and movies he watches, and games he plays. He also loves a good pun.
Related Articles: Neon Gods, Tabletop
Share
Tweet
Share
Submit