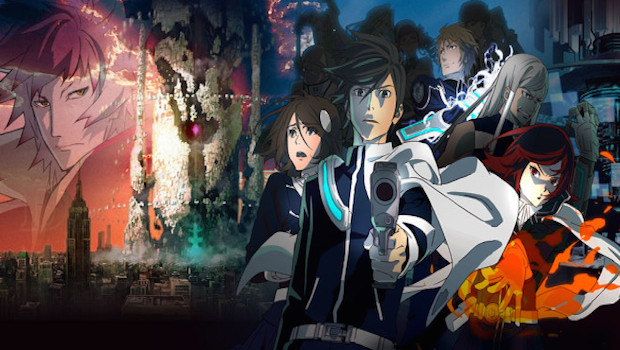 Lost Dimension is, in many ways, a testament to the changes made in JRPG design over the past few years. Madness, paranoia, and a little bit of reading. Unassuming heroes from quiet towns are replaced with hardened soldiers, watching their backs against their own kind. Dungeons and grand quests are nowhere to be found, or at least not in the traditional sense; instead, dreary towers and post-apocalyptic ruins litter the battlefield, riddled with bulletholes and shrapnel.

Stories are intimate and personal, and the struggles are often more internal than external. Lost Dimension may not nail every moment perfectly, but it still shines bright as another strong entry to the Vita’s RPG library.

Story scenes mostly play out in text windows, though there’s a handful of cutscenes and animated movies.

The plot of Lost Dimension starts with a bang: a tower has appeared, and inside it is a man calling himself The End. He threatens the end of mankind in only a matter of days, and the tower seems to have the firepower to do it. The United Nations employs its special forces unit, the S.E.A.L.E.D., to infiltrate the tower to climb to the top and assassinate The End.

Skilled with an arsenal of weaponry and employing enhanced abilities that border on magic called Gifts, the S.E.A.L.E.D. are the perfect team for the task, but not all of them are working to stop The End. There are traitors among you, and as the protagonist Sho, you must use your powers of clairvoyance to discern the dark thoughts amongst the team as you climb the tower, or risk failing your objective at the hands of the villains among you.

It’s a great set-up, though it feels a little rushed at the beginning. The story starts fast and then meanders a bit, waiting until the last couple floors of the tower to really kick back in, but when it’s going at full blast it’s fairly interesting. Stylistically, Lost Dimension drives home the despair and struggle of the S.E.A.L.E.D. team, and the techno-punk backdrops mesh well with the characters. Each S.E.A.L.E.D. members’ design fits their personality and their skillset, and the enemies are a wonderfully creepy mix of man and machine.

Enemies start out weak, but will start to develop their own abilities and strategies to counter yours, resulting in a very challenging AI to combat in later missions.

The worst part of the story is the payoff, or rather, the lack thereof. There’s a lot of opportunity to develop character identity and backstory, and teammates like Himeno and Sojiro have fascinating stories and character-specific quests to explore.

The narrative, and its eventual conclusion, don’t reach those same heights, and the full story isn’t even revealed until you’ve reach full loyalty with every S.E.A.L.E.D. member – a task impossible until at least your first NG+ run. Lost Dimension is a lengthy game already, with my first playthrough clocking in close to 20 hours, the task of running it again from level one was a little daunting just to see why exactly The End wanted to nuke the world.

Companion stories like Himeno’s are very emotional and well-written, and stand out as narrative high points.

Lost Dimension’s battle system is reminiscent of titles like Valkyria Chronicles. Each character can move and perform an action each turn, and then the enemy takes their turn to move and act. You can move freely through a given area within your range, and attacks do extra damage , so sight lines and positioning becomes very important as you climb higher up the tower. Characters will also assist each other in attacks, so creating chained assaults by moving and deferring turns is one of the key components to Lost Dimension. Lining everyone up and then unleashing the onslaught feels very rewarding, but the minutia is where Lost Dimension will become more challenging for some.

The management of Gifts and sanity is challenging, as every skill you cast starts to feel like a commitment. Having that massive team buff is good, but if it means sacrificing half of a character’s sanity, is it worth it? The best laid plans are made in the first turns, and broken in the final few as your entire team’s sanity wanes and health flashes red against insurmountable odds. As enemies grow in size and strength, every shot has to land, and every attack carefully metered, as a single wasted action could mean the difference between restarting the mission or clearing with an S-rank.

Each S.E.A.L.E.D. member has a single action per turn, but can defer that action to allow others to move multiple times.

Your key to surviving each mission will be in developing each S.E.A.L.E.D. member, managing their equipment and skills to be an effective part of your team. Each member is unique, skilled in their own speciality and filling a certain role on the team. Himeno is a mage, using pyrokinetics to blow her enemies to bits, and several other characters employ elemental and physics-based attacks as well. Sojiro fills the healer role, while Toko can buff your team and Marco tanks hits and replies in kind with massive psychic explosions.

Zenji was instantly a regular in my squad, as he can Link with other S.E.A.L.E.D. to gain their stats and abilities to use, while also sharing any buffs or benefits both ways. It allowed for interesting adaptations to enemy assaults, letting me heal from a distance, apply buffs to all of my allies at once, or use brutal Gift attacks over and over again.

Zenji’s Brutality ability allows him to return damage to his attacker.

That doesn’t mean they’re forced into only one archetype on the battlefield, though. A key component to surviving as you climb the tower is making sure your team excels in all areas, while also specializing in what they’re best at. The skill tree for each character is deceptively simple at first, but allows for a variety of different skills and builds. For Toko, I chose to maximize certain aspects of her – I could’ve focused on her being a status-inflicter or buffer, but instead I bolstered her passive auras and her devastating Psychic Assault attack.

Mana, meanwhile, was my tank for a good portion of the game, and I passed over her massive damage potential to develop her defensive stats instead, making her a giant wall that absorbed enemy hits and then dished them back out like the Hulk. My build for Mana relied on her tanking hits until she went Berserk and annihilated enemies. In Lost Dimension, each character has a sanity meter alongside their health bar and Gift Points, the mana-esque resource expended by using Gifts. Each Gift power cast costs a bit of your sanity, as does deferring, which is ceding one character’s action in a turn to let another character act again. When someone’s sanity hits zero they go berserk, gaining massive power but taking more damage, becoming uncontrollable, and losing the ability to distinguish friend from foe.

Each character is specialized, but usually has options for both offense and defense. Toko’s usually a buff specialist, but can devastate enemies with her Psychic Assault.

While missions gradually ramp up difficulty and rarely let up, there were only a few times that Lost Dimension ever felt completely unfair, mostly in the final missions of the game. The climactic boss fight against The End is an especially crazy difficulty jump the first time you face it, though with some careful planning and a mild dash of luck, you can overcome him even at a major level disadvantage. You might have to occasionally grind for better equipment or levels, especially to conquer the highest-difficulty missions, but you shouldn’t have to backtrack very often if you’ve been completing every side mission and keeping up on equipment upgrades.

Massive enemies require both strategy and overwhelming firepower to take down.

In between missions, you can spend time at your base camp levelling up your S.E.A.L.E.D. team, chatting with them and developing friendships, or looking over your notes on who the traitor might be. There’s a decent variety of equipment choices to look over, but the meat of the main hub’s content is in the support conversations and the Judgement Rooms.

As you progress through each floor, you’ll eventually come to a Judgement Room, where you must execute one of your own to continue. This provides an excellent opportunity to rid yourself of the traitors in your midst – if you play your cards right, you’ll reach the final encounter with every traitor eliminated. Execute the innocent, though, and you’ll find yourself outmatched when the traitors turn their sights on you. You can only control who Sho votes for though, so you have to also convince the other members of the team who the traitor is, by deducing it through the Vision menu.

Paying attention to voices after each battle is crucial to identifying the traitor in the group.

After each mission, the clairvoyant protagonist Sho will hear voices from the team he just fought alongside and mark in the Vision menu whether he’s heard suspicious voices among the team or not. While he can’t pick out who exactly they’re coming from, he can count the number of malicious voices in the team. Some are false-positives, leading to some confusing logical puzzles, but most of the time you can suss out the traitor with some intelligent mixing and matching. Once you have an idea of who is likely a traitor, you can confirm it by playing a minigame where you dive into a teammate’s mind to see if they really are a traitor or not. I’d hoped that figuring out the traitor would be more interesting or have more storyline bearing other than occasional moments of despair, but the fact that it’s randomly generated each floor who the traitor is keeps future playthroughs fresh.

While available on the PS3 and running very smoothly on that system, I spent my time with Lost Dimension on the Vita. The hardware limitations are evident, but fairly minimal. You’ll often get a loading screen before attacks or skills, though they last less than a second – no exaggeration, I timed it out – and become fairly routine after the first floor. Textures aren’t as great either, but as a handheld SRPG, I rarely found Lost Dimension lacking technically compared to other titles.

Lost Dimension is a solid premise and unique take on the SRPG formula, even if the storyline falls a little flat. A simple, yet effective battle system and smart character design mixed with some style and compelling individual backstories make for a nice meld of refreshing, interesting concepts. In a sea of imported RPGs on the Vita, Lost Dimension stands out as one of most innovative and interesting titles for the platform.

Lost Dimension is a unique, innovative RPG that can pride itself on fantastic characters and an engaging combat system. While the narrative isn’t fantastic, the NG+ features and intricate Gift skills will likely have you coming back for seconds. A fantastic addition to the Vita library.