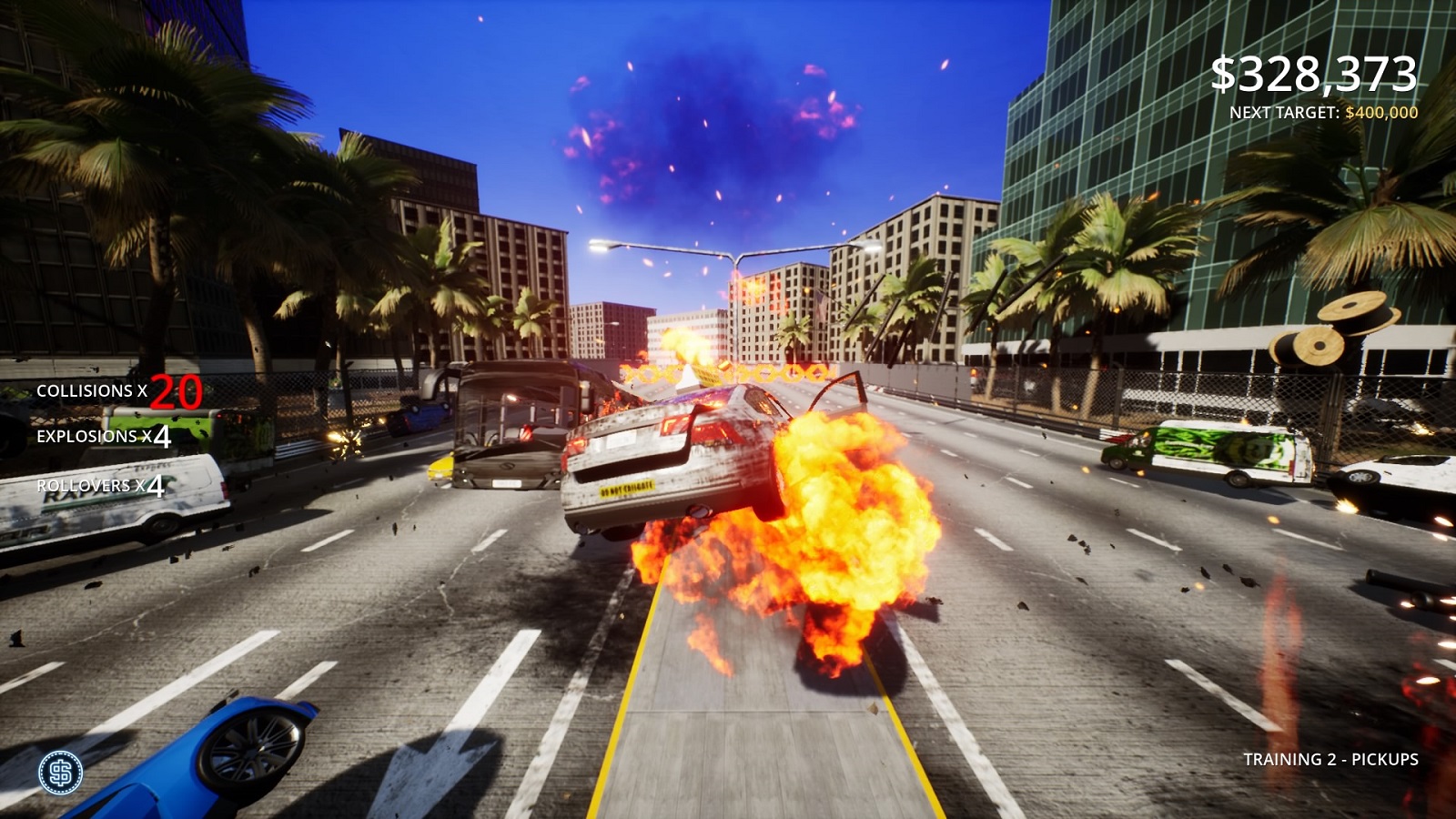 I know we’ve recently been blessed with Burnout Paradise Remastered, but sometimes I really just want a new Burnout game filled with addictive crash mechanics and thrilling races. Three Fields Entertainment took the crash mode mechanics and made Danger Zone last year to a mixed reception. With its sequel out now, does Danger Zone 2 have enough gas to make an explosion to the arcade racing scene?

Danger Zone 2 is a single-player arcade racing experience where you drive cars to their impending doom, marked helpfully by the Danger Zone indicator where you’ll make a chain reaction crash. Your goal is to make the biggest explosion possible, racking up hundreds of thousands of dollars in damages as your car-nage continues. The main ability is the Smashbreaker, which will cause your vehicle to explode in flames, and you can use it multiple times with various pickups. You can also boost in some levels, which will grant you boost chains should you consume your whole charged meter without hitting anything.

Levels also include Run Up goals, which range from hitting certain vehicles to executing slo-mo jumps (which changes the perspective of the camera to something out of a Dukes of Hazzard episode). These are essential for higher scores, as completing this goal will grant you a $250,000 bonus (usually enough to attain at least a bronze medal and advance to the next stage). For those expecting something from Burnout’s crash mode mechanics, you’re in for a treat. The energy of the car crashes is fully intact, and racking up a huge combo is a highly cathartic experience. The levels emulate an adrenaline-filled experience, and the moment you initiate a crash is important and visceral. The lingering effect of the aftermath puts the game into perspective; you’re the reason a virtual city incurred a million dollars in damages today. Want to see this in action? Check out my first thirty minutes of the game.

You can’t crash until you reach the Danger Zone, so most levels initially have you getting from point A to point B without crashing prematurely; do this, or it’s lights out. Most vehicles you drive can bump and destroy other cars going in the same lane of traffic, so you’ll have to use this to your advantage if you’re planning on attaining those Run Up goals. Scattered around the danger zone are item pickups, which include instant Smashbreaker use or money bonuses. These are great ways to extend your crash area, and act as a way to help increase your score if you’re planning on getting to the top of the online leaderboards.

While the main gameplay mechanic is engrossing and fun when you get into the swing of things, the rest of Danger Zone 2 is rather unpolished. Levels are strictly mission-based affairs, so don’t expect a ton of Burnout-esque races (though there are unlockable bonus events that serve this purpose after you finish the game). This is unfortunate, because the environment and level design looks great. You’re usually in large highway outdoor settings with plenty of things to crash but not much else. It’s also rather constricting as well; veer even a little off the path you’re directed, and you’ll crash prematurely. It doesn’t give much freedom to approach the Run Up goals, as the game feels linear with its crash areas. It feels strict at times, and I wouldn’t mind a little open-ended gameplay here and there. If you miss the Danger Zone by even a few yards, it counts as a game over and you’ll have to restart; this only happened a couple of times for me, but the restriction still felt odd.

The presentation of the game is also uneven. I did play on an original slim PS4 model, so I could only experience the game in 30 FPS, but it did run quite smoothly regardless. However, there is no meaningful sound design or background noise, just the ambience of crashing cars and other incidental effects. This makes the constricted settings mostly hollow, which is a shame because I would have loved a hard-rocking soundtrack or an over-the-top announcer to narrate the game here and there. As you can see from my first 30 minutes of gameplay, load screens were plentiful throughout missions, and the menus are very basic and generic. It’s also annoying to be held with a few seconds of loading if you need to restart, as it doesn’t put you in the action right away, and it kills the flow if you’re not doing exceptionally well. While the main game looks pretty, the rest of it doesn’t.

Finally, I have to knock some points off for the overall amount of content in Danger Zone 2. I was excited and had a lot of fun with the first thirty minutes of the game (which you can see above), but my hopes were dashed after I played through all the game had to offer an hour after that. While the first game had a little over 30 levels across four tiers of difficulty, this game only has three regions and 23 levels. While that admittedly sounds like a lot, levels take less than a couple minutes each, and while some of the scenarios are tricky, they won’t take more than a few retries to at least advance to the next level.

You also have a handful of different vehicles that you’ll control, with different handling and weight. This is important, as in the case of an F1 race car, as some vehicles will crash at the drop of a hat while others can take a beating. Personally, the stages with a truck mowing down hapless traffic were by far my favorite, and if we can get a truck driving simulator like this, I’d be all for it. However, due to the paltry amount of levels, you won’t have enough time with your favorite vehicle, and the game unfortunately leaves you wanting more from it. You could shoehorn in a few more levels and that would probably be satisfying enough, but as it stands, with only around an hour and a half of unique content, it feels more like a glorified demo than a $19.99 downloadable game. This is especially egregious as rolling the credits will show an advertisement for Three Fields Entertainment’s next title. Hey, maybe finish your current one first?

Put Thanos in the next one and then we’ll talk.

Danger Zone 2 attempts to bring back the crashing thrills of the Burnout franchise, but unfortunately falls prey to presentation issues and a lack of overall content. It’s still a fun time for the couple of hours you have with the game, but there are much better arcade racing titles from which to choose.

Elisha Deogracias is an aspiring accountant by day, freelance writer by night. Before writing for Gaming Trend, he had a small gig on the now defunct Examiner. When not being a third wheel with his best friends on dates or yearning for some closure on Pushing Daisies, he's busy catching up on shonen manga and wacky rhythm games. Mains R.O.B. in Smash. Still doesn't know if he's a kid or a squid.
Related Articles: Danger Zone 2
Share
Tweet
Share
Submit