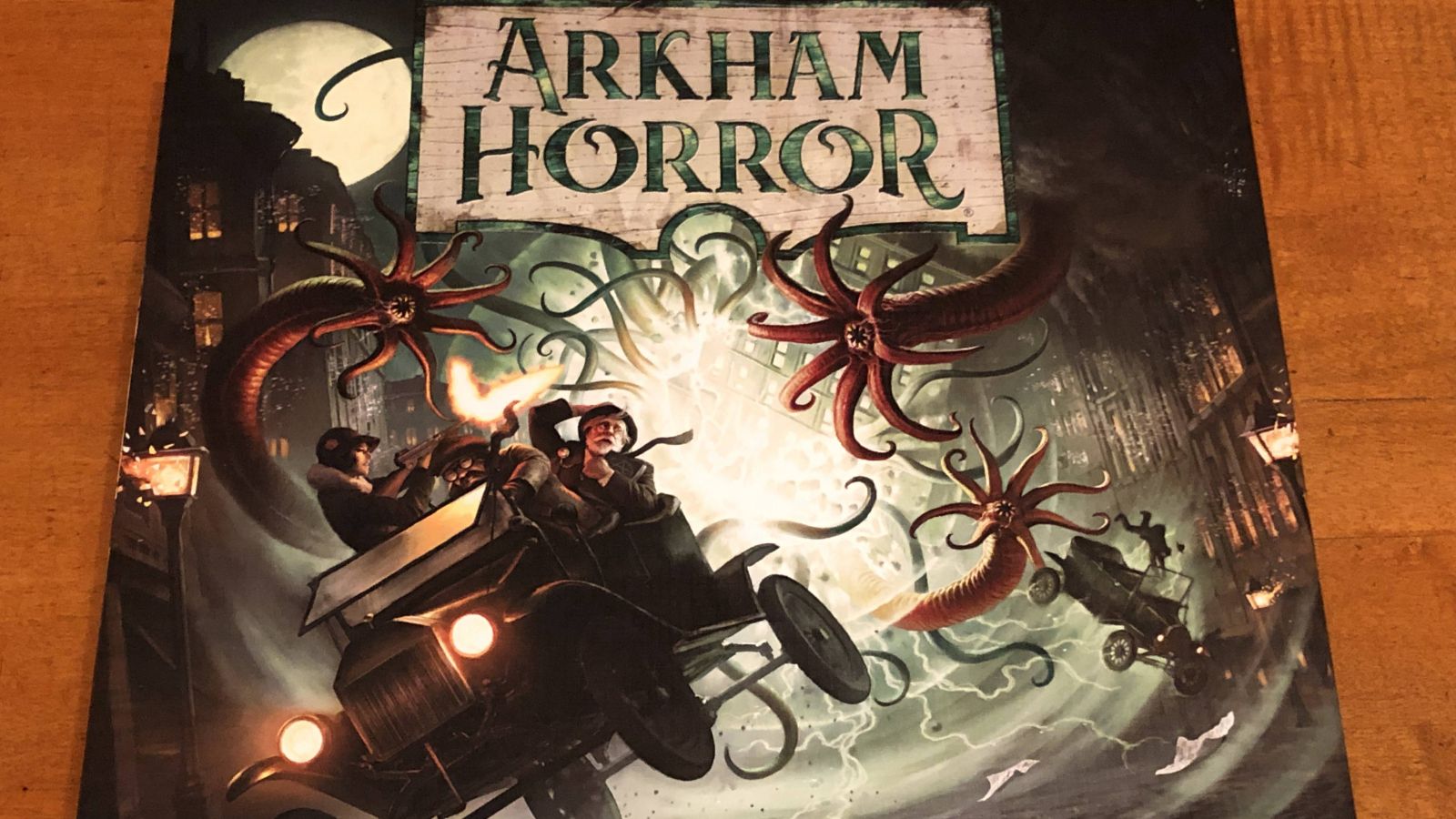 Arkham Horror includes the large cards, small cards, and tokens typical of a Fantasy Flight game. The large cards mostly pertain to the game story and where they take place. The smaller cards show weapons, items, and spells that the investigators use. Tokens for health, sanity, clues, money, and other uses keep track of the player’s well-being and stats. A few anomalies show up in that the game comes with a holder for the Event Deck. It’s useful since the cards in the Event Deck have the same backs as the locations, and sometimes you draw from the bottom of the Event Deck. Also, there isn’t a board in the traditional sense. Instead of a static board composed of locations that’s used for every game, five map tiles are joined by street pieces to create the map.

When setting up the game, the first step is choosing the scenario card. Four scenario cards are included in Arkham Horror, but I wouldn’t be surprised if more come out in later expansions. (This is a Fantasy Flight game after all.) The scenario card shows the setup for the game, from the map to the initial placement of doom trackers, monster deck, mythos cup, and the codex. These scenarios give more variety to future plays, but it also gradually reveals the story. In the Second Edition you’d choose an Elder God that you would try to prevent from appearing. Here, there’s a mystery behind what is going on and what the endgame is. 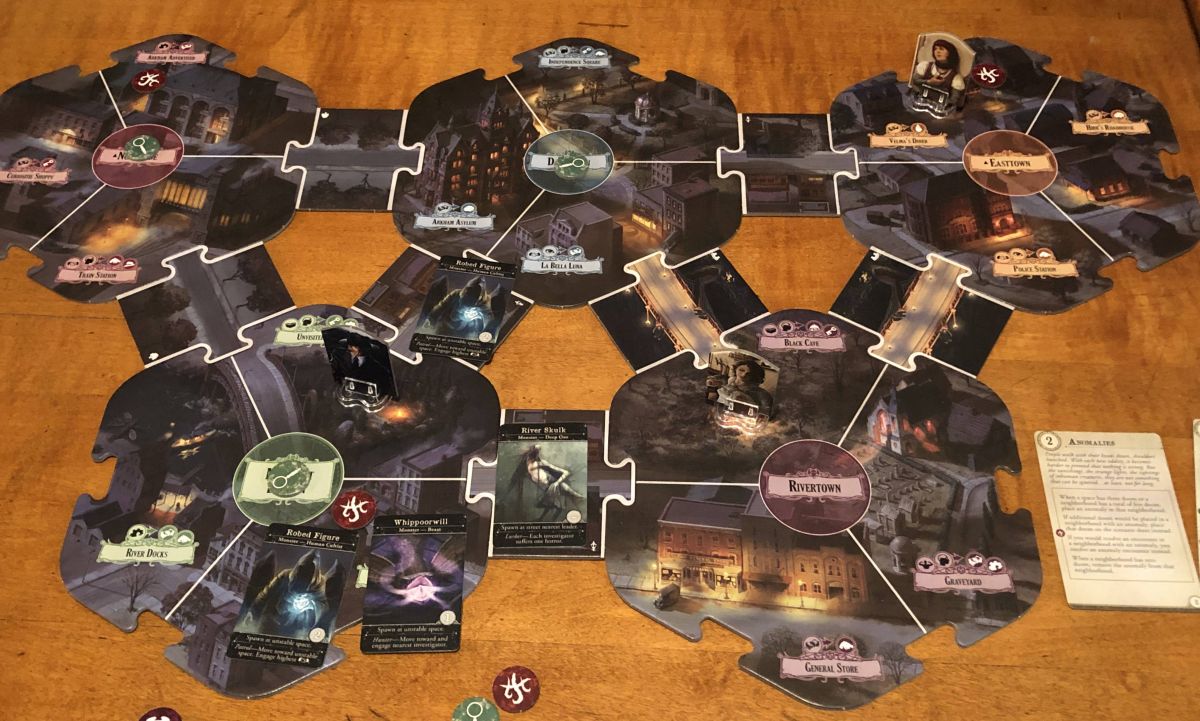 After setting up the map and the location decks, preparation of the event deck happens. Each scenario has its own set of cards. However, the backs show the same art as the locations, so you need to look at the front of the cards to sort out the event deck cards from the location cards after the game is over. Then the set up of the monster deck occurs, using the monsters mentioned on the scenario card. The mythos cup is set up similarly with the mythos tokens on the scenario card. If you have a bag, that works nicely, but the box cover works in a pinch. Other cards are set up like the library deck, allies, spells, items, and the archive which moves the story along, as well as the different tokens used in the game.

Twelve investigators come included in Arkham Horror. Investigators have different values for health, sanity, lore, influence, observation, strength, and will. Health and sanity indicate your physical and mental well-being, while the other attributes get used for checks during encounters. These attributes are set, so those used to switching the loops in the Second Edition won’t have to worry about that this time around. Each player takes one investigator card and token as their current persona in the game. They gather their starting items and money and place their token in the starting location indicated on the scenario card.

Finally clue tokens are placed by drawing the first three cards in the Event deck, doom tokens get placed according to the scenario sheet and the card drawn from the bottom of the Event deck, and any final instructions in the “Finalize Setup” area of the scenario sheet. This includes putting Archive cards in the Codex. These explain the story, but also give instructions for completing objectives. Now you are ready to start the game. In case you are wondering, not quite half of the “Learn to Play” rulebook is dedicated to the setup. 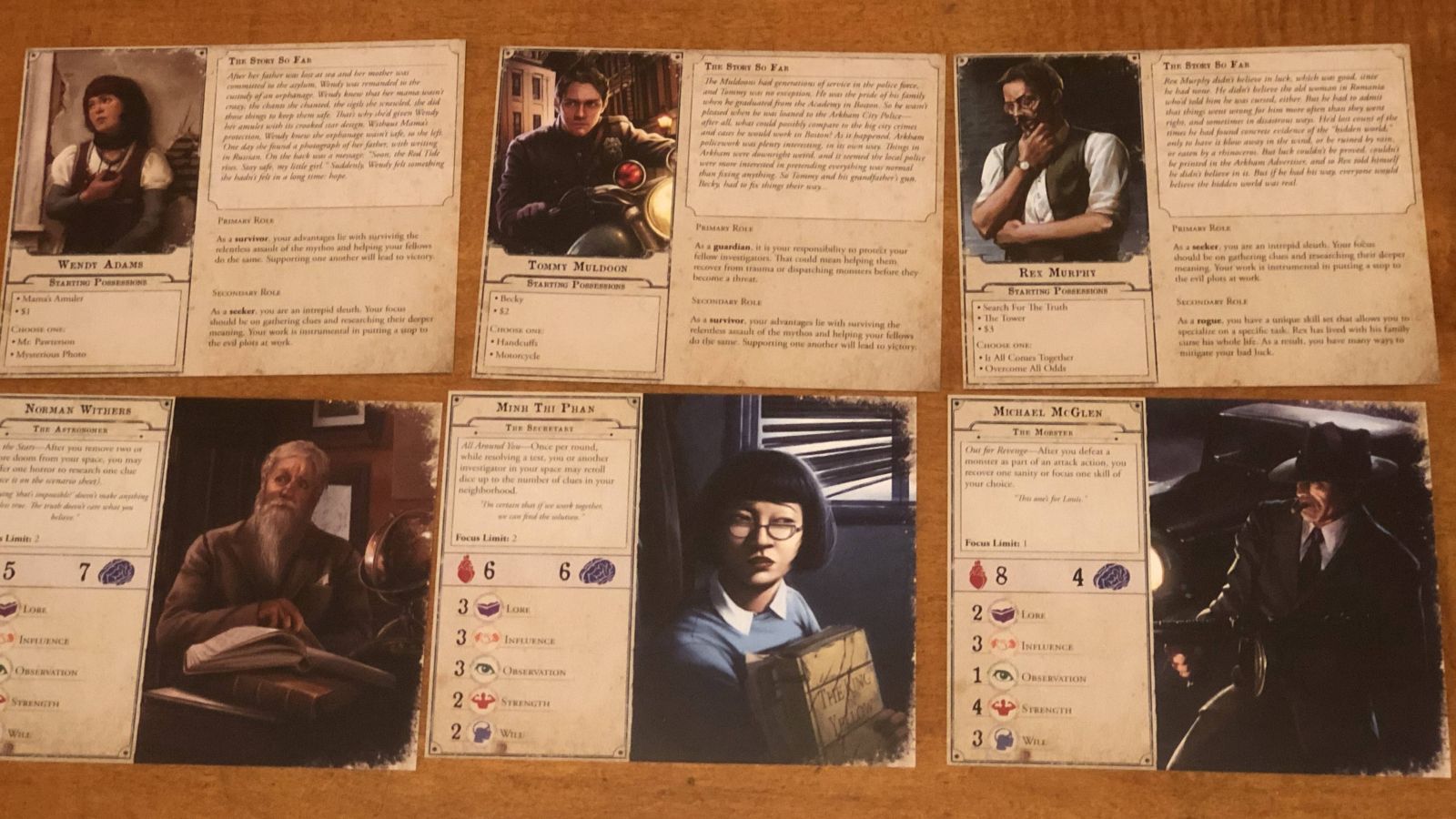 Gameplay in Arkham Horror is divided into four phases. The first is the Action Phase where the investigators choose what actions they perform. Actions include move, gather resources, focus, ward, attack, evade, research, trade, and use a component. When moving, the investigator can traverse two spaces on the board. When gathering resources you gain a dollar. When taking the focus action, the investigator takes a token for any skill to increase that skill by one during that time. They can also be spent to reroll a die during a test. Performing the ward action clears out as many doom tokens as successes rolled against a lore test. Attacking a monster causes damage to the monster for each success rolled against a strength test. To evade monsters in your location a check is rolled against the observation skill. Research actions also perform observation tests, but for each success you take a clue token and place it on the scenario sheet. Trading can be done among any investigators in the same location. Items that have “Action” on them can also be used during this time. You can use any action, but it can only be used once during an investigator’s turn.

If you’ve played Arkham Horror Second Edition or Eldritch Horror, then you know how skill tests work. During a test the investigator gets a number of dice equal to their skill, modified by focus tokens and possibly a monster they are going up against. A successful test requires one die to roll a five or six, otherwise it fails. The test result is the number of successes rolled. Clue tokens and focus tokens can be spent to reroll a die. 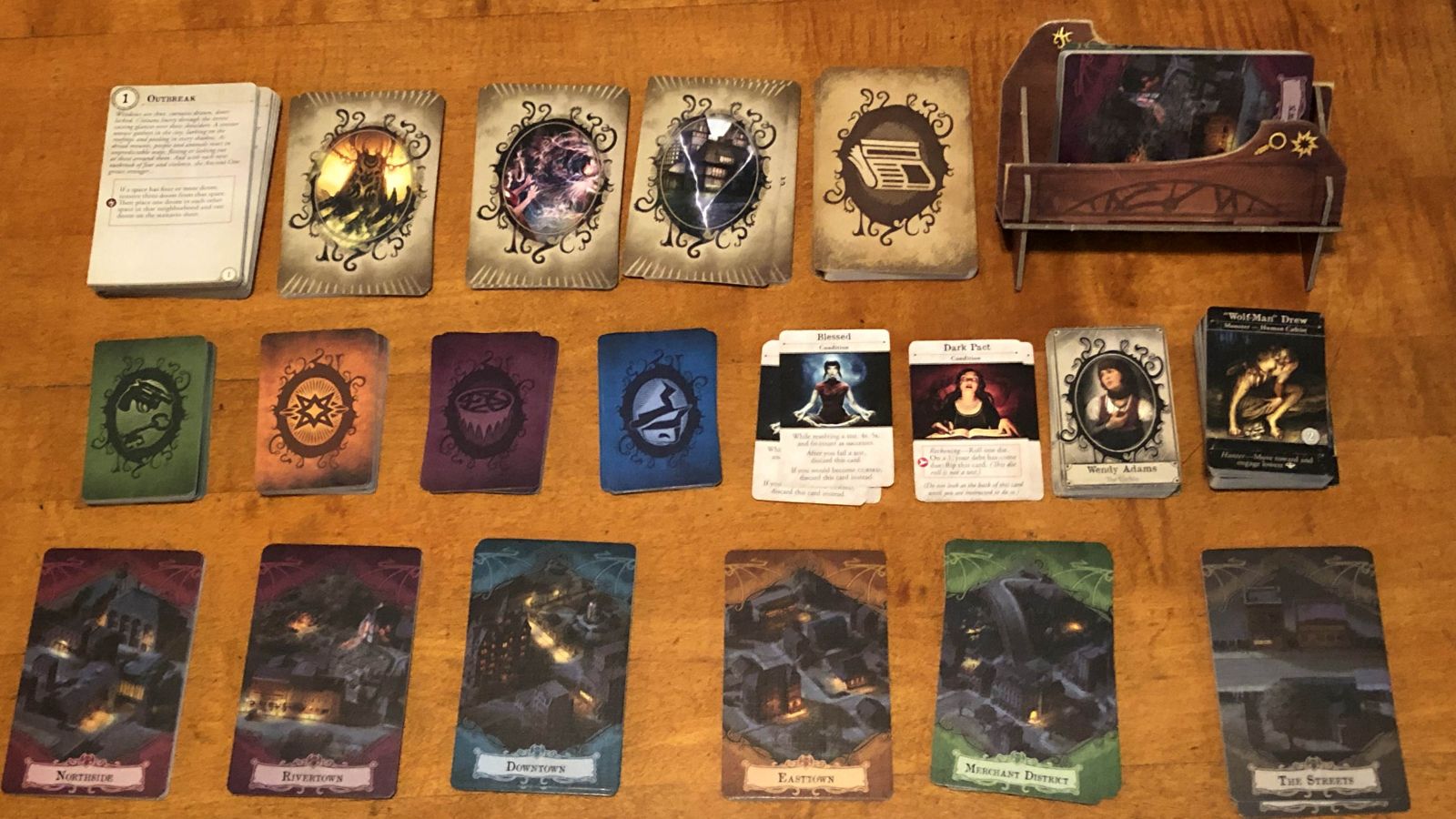 After the Action Phase, the Monster Phase takes place. The monsters have different states which determines what they do. Ready monsters are ready to move or attack, exhausted monsters can’t move or attack, and engaged monsters are ready to attack an investigator. First, ready monsters behave according to their type. Hunters move towards an investigator according to a particular attribute such as lowest strength or highest clues. Monsters that patrol move towards specific spaces. Lurker monster stay put, often causing other issues like spreading doom. After the ready monsters make their move, engaged monsters attack. When investigators are attacked, they get health and sanity taken away equal to the amount shown on the monster card. Exhausted monsters are then turned to their ready side.

Of note, the monsters in Arkham Horror Third Edition are represented by cards instead of tokens like in the Second Edition. While some might be disappointed by this, the cards contain all the relevant information needed for that monster, and the monsters seem to be more varied in the Third Edition compared. The cards can be a little difficult to pick up though.

Next comes the Encounter Phase. Investigators not engaged with a monster take a card from their corresponding neighborhood, find the location on the card, and read what the card says. These often have skill tests that can give the investigator something good, or prevent something bad from happening. Some of the Event Deck cards will wind up in these decks. These Event cards will likely give the investigator a way to gain clue tokens from the board as well. Event cards will have more relevance to the scenario, while the generic location cards add flavor to the game. 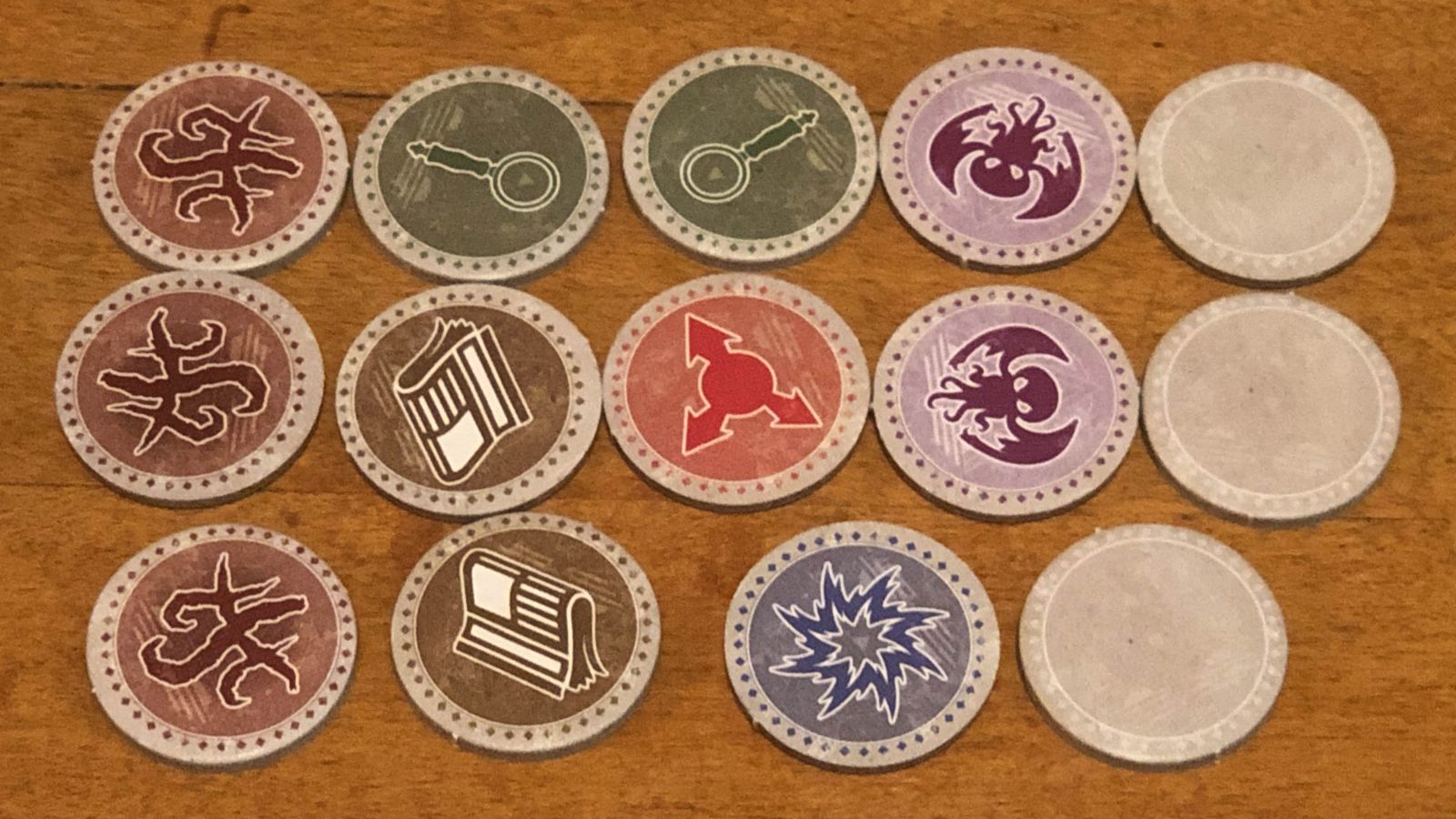 After all players complete their encounter, the Mythos Phase takes place. During this phase, each player takes two tokens from the cup. Sometimes these are blank or spawn a new clue token, but more often than not they do bad things like add doom tokens, spawn monsters, read headlines which can have positive or negative interactions, and resolve any reckoning effects. Pulled tokens stay out of the Mythos Bag until it is empty and a token needs to be drawn again. Then all the discarded tokens are placed back in the bag. I like the fact that there is some amount of chance for what effect comes during the Mythos Phase, but you are also guaranteed something bad will happen if the order isn’t carried out properly.

Sometimes you can’t avoid being killed. If an investigator dies, the investigator’s possessions are discarded, and a Doom token gets placed on the scenario sheet. The player then takes a new investigator and starts again. I’m glad that they don’t eliminate players during the game, because it will take everyone’s help to defeat the possible Elder God at the end.

I feel that Arkham Horror has gone a long way to try to provide some semblance of a narrative. It’s fixed a lot of problems with the travel, and you aren’t going to go from one side of a gate to the other side as your “turn.” The scenario variety gives it more of a feeling than just attacking monsters and closing gates and sealing them to win the game. Games do feel like they go at a nice clip, but it does help to strategize a bit during each turn.

For many years Arkham Horror Second Edition was a staple for my friends. We'd choose an Elder God, explore the area, close portals after going through them, and do our best to prevent the Elder God from showing up at the end. However, we learned our lesson of not playing with more than four players or the game would drag out, and there wasn't much of a story behind the game. Eventually we'd move on to Eldritch Horror since it felt like a global streamlined version. Arkham Horror Third Edition feels like the best of both worlds of Arkham Horror Second Edition and Eldritch Horror. The focus on story truly helps the game rise above the other two, even if it does add to the set up and take down time.

While not working as a Database Administrator, Keith Schleicher has been associated with Gaming Trend since 2003. While his love of video games started with the Telestar Alpha (a pong console with four different games), he trule started playing video games when he received the ill-fated TI-99/4A. While the Speech Synthesizer seemed to be the height of gaming, eventually a 286 AT computer running at 8/12 Hz and a CGA monitor would be his outlet for a while. Eventually he’d graduate to 386, 486, Pentium, and Athlon systems, building some of those systems while doing some hardware reviews and attending Comdex. With the release of the Dreamcast that started his conversion to the console world. Since then he has acquired an NES, SNES, PS2, PS3, PSP, GBA-SP, DS, Xbox, Xbox 360, Gamecube, and Wii. While not playing video games he enjoys bowling, reading, playing board games, listening to music, and watching movies and TV. He originally hails from Wisconsin but is now living in Michigan with his wife and son.
Related Articles: Arkham Horror Third Edition, Tabletop
Share
Tweet
Share
Submit