I remember renting Battle for Bikini Bottom multiple times from our local Blockbuster. I’m not sure if I ever beat it or not, but I remember having a ton of fun. It was a 3D platformer released when the genre was arguably at its peak, with games like Sly Cooper, Ratchet and Clank, Billy Hatcher, Super Mario Sunshine, Blinx, and many more on store shelves. Needless to say, I’m a huge fan of the genre and have devoured as many of these games as I can find. There’s just something simply fun about jumping about in a fantastical environment. In a move no one expected, SpongeBob SquarePants: Battle for Bikini Bottom has received a remake courtesy of Purple Lamp Studios and THQ Nordic in Unreal Engine. It’s got completely overhauled visuals, a stereo soundtrack instead of the original’s mono, a new multiplayer mode, and even some restored content. It’s clear that there’s been a lot of love and care poured into Rehydrated, but is the game as enjoyable as I remember?

Story is obviously not the focus of SpongeBob, it’s mostly just context for the jokes, but we’ll go over a short summary here. Plankton has built an evil robot generating machine, the robots refuse to obey him, and it’s up to SpongeBob, Patrick, and Sandy to defeat the robots and save Bikini Bottom. In order to unlock new levels and eventually enter the Chum Bucket to put an end to the robot production, they’ll need to collect Golden Spatulas… for some reason. There’s no context why these are so important other than there’s a number in front of a door you need to meet. As you explore each level under the sea, you’ll meet iconic characters like Mr. Krabs, Larry, Squidward, Mrs. Puff, and more who all have the hilarious dialogue that the show was known for. The game is consistently funny, and I had a smile on my face the entire time.

Like Super Mario 64, each level has multiple golden objects and other collectables to collect. Usually, you’ll be given a main objective at the start of a stage which you’ll work towards throughout, and multiple smaller tasks to accomplish along the way. For example, in Downtown Bikini Bottom Mrs. Puff has you searching for steering wheels so citizens can evacuate in boats, while later on in your search Larry will ask you to replace his TV antenna. This keeps the game constantly engaging as everything you do will lead to progress in some form. Throughout the game you’ll also want to keep an eye out for Patrick’s socks and shiny objects (the game’s currency), both of which can be exchanged for even more golden spatulas. To spice things up, some levels have unique gimmicks like a focus on stealth in Rock Bottom or beating NPCs’ best times on the slopes of Sand Mountain. There’s a metric ton of things to do here and if you don’t enjoy a particular task there will always be other things to do to gain spatulas. 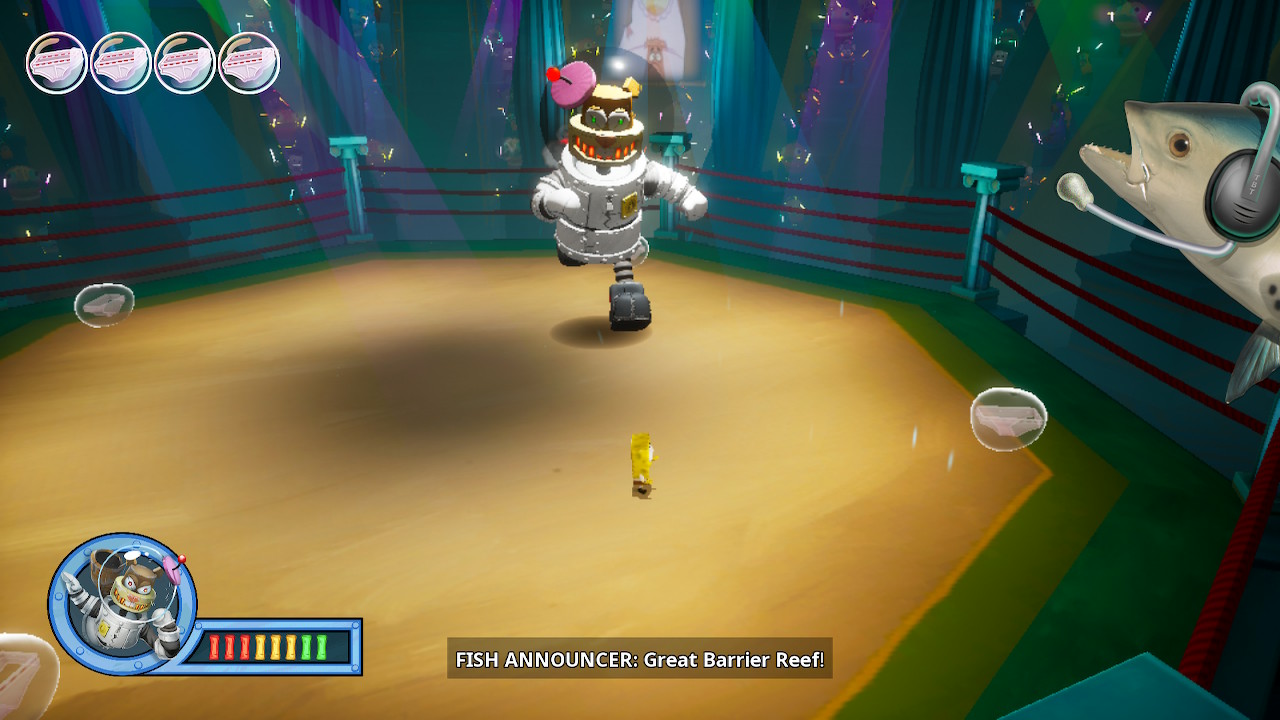 The three playable characters all have unique moves as well. Patrick can pick up and throw objects, Sandy can glide and swing from the floating spirit of Texas with her lasso, and SpongeBob can use his bubble blowing prowess to fire missiles, go bowling, or bash objects above him. You’ll mostly be playing as Mr. SquarePants, while you can occasionally switch to Mr. Star or Ms. Cheeks at a bus stop found in a level. While SpongeBob will gain new moves from Bubble Buddy, Patrick and Sandy’s movesets don’t expand at all. I do wish there was a bit more focus on these two characters or even the ability to switch to them at will, but all the levels are designed around the sponge’s moveset with short sections for his friends.

Rehydrated’s most obvious additions are the redone visuals. I mostly played the game on Switch and, apart from a few technical glitches and the far too short draw distance, it looks great. Colors just pop and each character’s animations are very expressive. As mentioned before, there are a few blemishes that unfortunately persist throughout the experience. First is that the draw distance is so short it can actually make collecting things in the more open levels much more difficult than it should be. I spent quite a while in Downtown Bikini Bottom searching for the last steering wheel, when it was actually on top of a building I had looked over multiple times and only popped into existence when I landed on the roof. There’s also the usual Unreal Engine problem of textures either taking a while to load in or not loading at all, with ugly low resolution versions taking their place. Loading times upon death or area transition are overly long as well, which becomes a huge problem in the much more difficult later levels where you’ll be dying almost constantly. During my playthrough, I encountered a fair share of glitches, with platforms moving the moment I landed on them or enemies not registering hits occasionally. All of these problems, combined with a run speed that feels way too slow and the music being so quiet it’s almost inaudible, are blemishes on an otherwise very fun game. 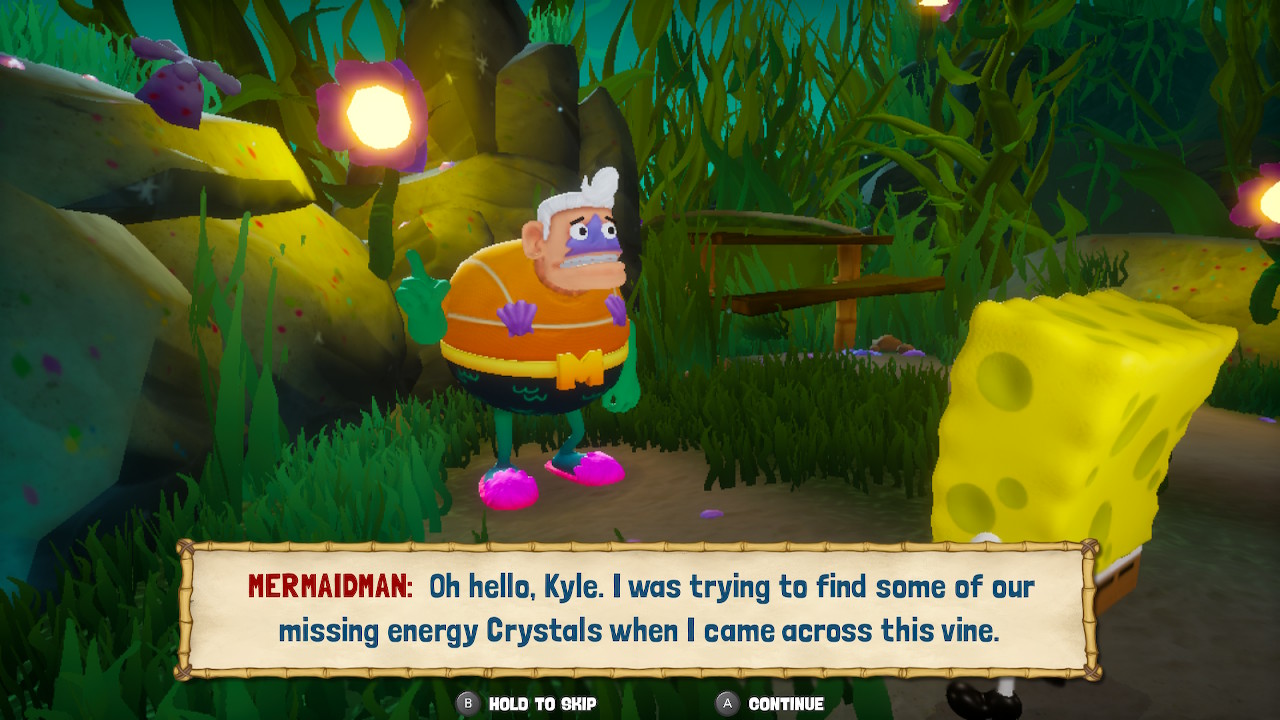 The new and restored content presented here may underwhelm some players, as most of it is contained within the multiplayer mode. Along with one other player, you’ll be fighting hordes of bots presided over by robot Squidward. I wasn’t able to spend too much time with this mode, but since combat isn’t the focus of the game the little I did play was fairly bland. There’s no dialogue here either, which is both a blessing and a curse considering how many times the main game repeats the same clips, but it also removes a lot of the charm and humor.

Rehydrated is a wonderful remake of an incredibly fun game. The humor and joyful platforming will have you smiling ear to ear, even if the game has more than a few technical problems.

David is the kind of person to wear his heart on his sleeve. He can find positives in anything, like this is a person who loved Star Fox Zero to death. You’ll see him playing all kinds of games: AAAs, Indies, game jam games, games of all genres, and writing about them! Here. On this website. When not writing or playing games, you can find David making music, games, or enjoying a good book. David’s favorite games include NieR: Automata, Mother 3, and Gravity Rush.
Related Articles: SpongeBob SquarePants: Battle for Bikini Bottom - Rehydrated
Share
Tweet
Share
Submit