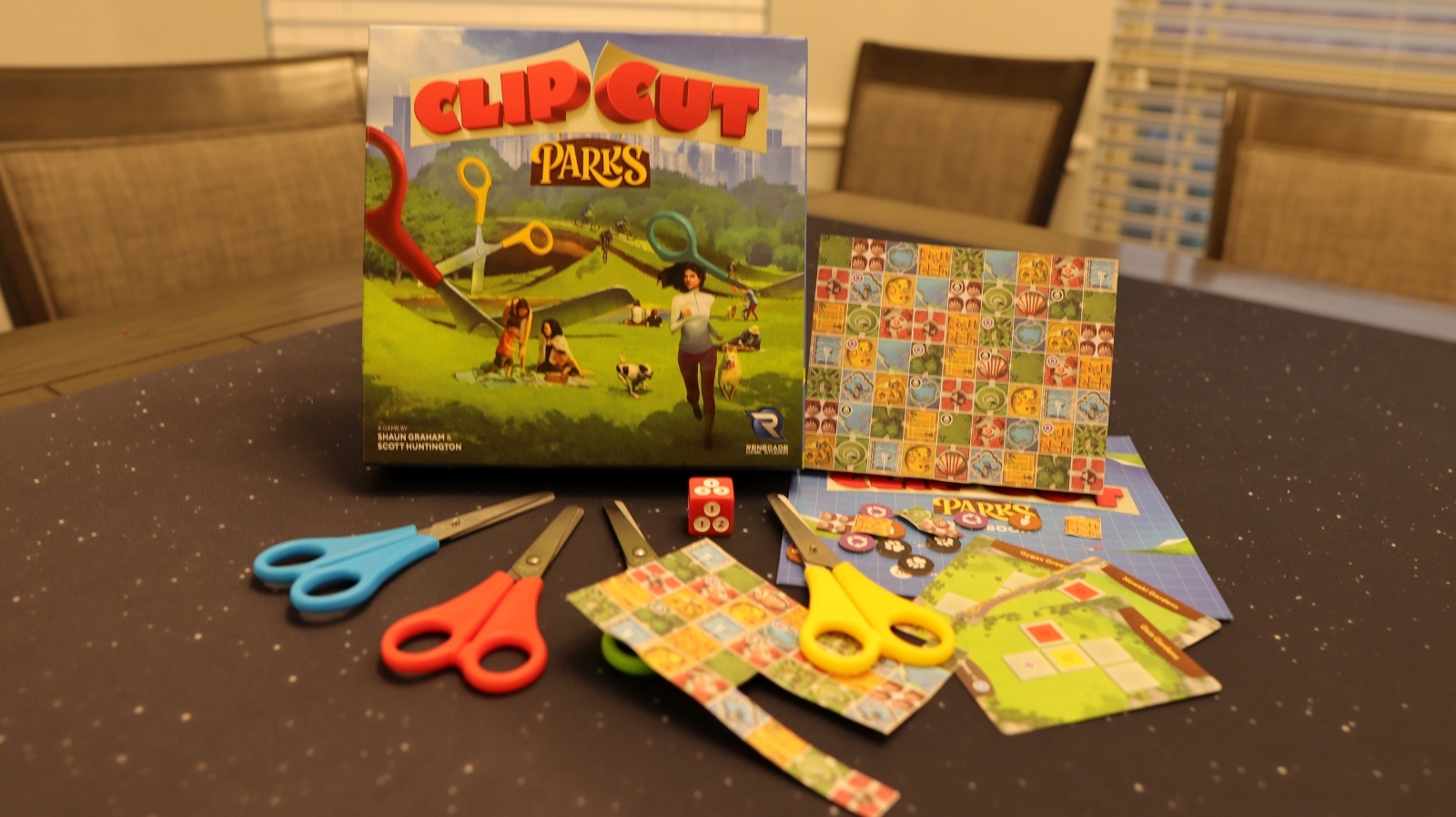 We got a copy of ClipCut Parks by Renegade Game Studios, and with the help of fellow GT Editors Ron and Laura Burke, along with my husband, we dove in to check out what this game had to offer.

As per the Renegade Game Studios website, ClipCut Parks is the world’s first “roll and cut” game. Your objective is to be the first player to complete five park cards.

Let’s take a look at what is inside the box:

ClipCut Parks is made for 1-4 players, ages 8+, with a playtime of about 30 minutes.

Learning how to play the game wasn’t too bad, after reading the rule book we fired up a short tutorial video which I really appreciated. I find it’s much easier to watch a video when playing with a group of people than to read instructions out loud. Each player grabs a pair of scissors, a sheet of park paper, and 5 park cards. The die has several numbers on each side, and you can cut into your park paper based on what you roll on the die. A round has five phases: roll, cut, build, check, pass.

Cutting rules are as follows:

Once a piece has come off the park sheet you must either place it onto your card, or crumple it up and place it in a discard pile by your cards. This is where some of the strategy comes in, as it is used at the end of the game in event of a tie to see who has less crumpled waste. It sounds more complicated than it is though. We had to stop the first few rounds to make sure we were making our cuts right, but it was pretty straightforward once we knew what we were doing.

The cards have different patterns on them representing the “parks” you are building. They are color coded along with the park papers so it’s easy to see which squares will fit onto the card. You have to place the matching colors onto the card, but if a square is blank you can place any color on it. There are also Wildlife and Recycling squares, which are indicated by a little footprint and recycling symbol. The color does not matter here, only that the symbol matches. 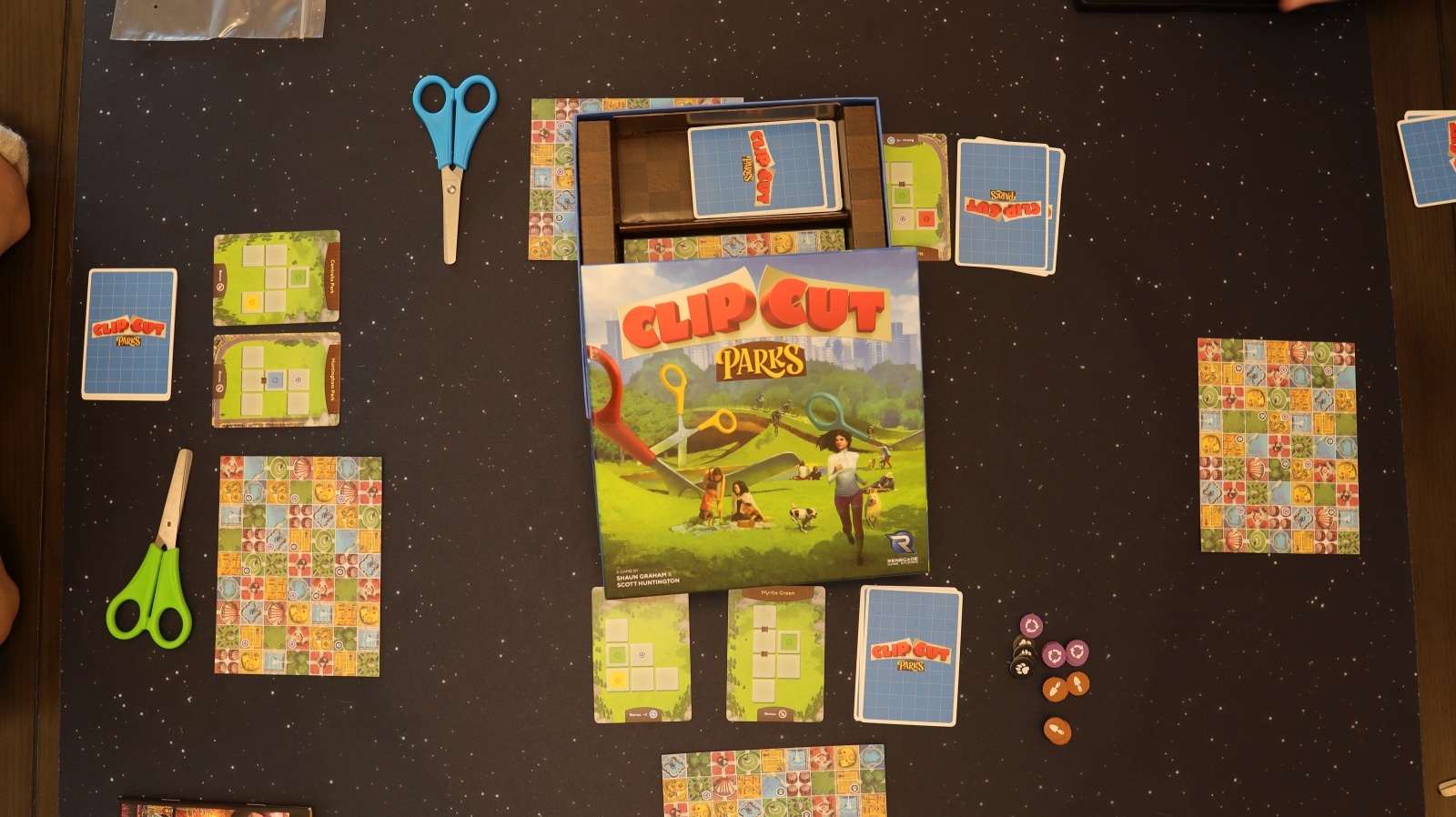 A peek inside the box. Getting ready to start our game!

After the cut phase, you enter the build phase. The sections you just cut out must fit onto your card, or else they must be discarded. You cannot use spare pieces for the next turn, they must be used or crumpled between rounds. This is where I struggled, because admittedly I am not the kind of player who plans ahead, I am more of a fly by the seat of my pants player.

Once you have finished a full card, you notify the other players, and then activate the bonus on the bottom of the finished card. These bonuses can be gaining a Wildlife/Recycling token, making an immediate “1” or “2” cut on your park sheet which must be played or crumpled at this time, or gaining a Gardener token. The Gardener token allows you to ignore space color/type and essentially make it a wild card.

When all’s said and done to win a full round only took our team about fifteen minutes. My husband, who is a critical thinker and always ten steps ahead of us, usually wins most games we play with Ron and Laura, so we pretty much expected that to be the outcome. He had no crumpled waste which put the rest of us to shame.

One thing I did find frustrating was that the little cutout pieces didn’t stay on the cards very well. Any movement would blow them out of place, or off the card all together.

While this game seems simple, planning ahead for the cuts is critical if you want to win. Sure, you can wing it like I did and do okay, but there is a deeper strategy here if you look for it. There were plenty of times I stopped mid-cut and said a curse under my breath because I realized the cut I was making wouldn’t work, or that I’d have to discard a piece I had intended to use next round, forgetting that you had to use all cut pieces immediately. There is no taking back your cuts once they are made.

We all felt like ClipCut Parks was entertaining enough for a few rounds, but I don’t think any of us wanted to really play more. At a $25 price point, I can think of plenty of other games I’d purchase or play before ClipCut Parks, but I am guessing the price is a tad high because the game comes with four pairs of scissors. The good news is that now I have four extra pairs of scissors for crafting.

ClipCut Parks is available on the Renegade Game Studios website for $25.00 USD

If you’re into puzzle solving and like scissors, I suppose this game might be worth a try. It’s certainly unique and interesting, and we did have fun for an hour or two trying it out. I appreciate the fact that they tried to create a new genre and branched out to test new things, but I just don’t see much replayability for adults here.

Holly Hudspeth is a best-selling author living in Fort Worth, Texas. She has six published novels to date; The Skyy Huntington Series, which is an epic dark fantasy adventure, and One Small Detail, a stand-alone medieval fantasy. Holly also enjoys writing fan fiction based on her avatars from games such as EverQuest, Elder Scrolls Online, and World of Warcraft. Her first major purchase at the established age of nine was the NES, and she has been gaming ever since. She enjoys fantasy games, city builders, RPGs, MMOs, SMITE, and The Sims franchise. Most nights she is in SMITE with her husband and friends, or playing ESO. When she isn't gaming, she is probably either at Disney or planning her next trip there.
Related Articles: ClipCut Parks, Tabletop
Share
Tweet
Share
Submit