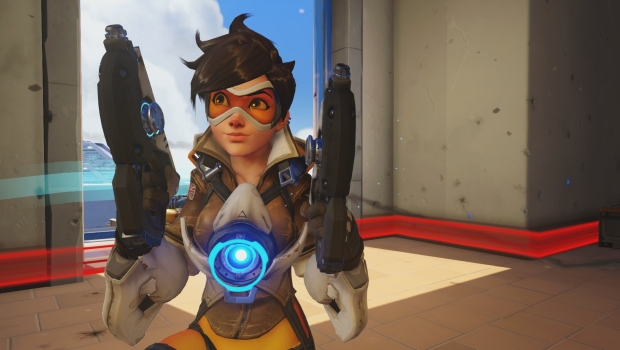 Our world is worth fighting for. – Mei

Every match of Overwatch begins the same way. An opening line from a character, an exchange of dialogue between two heroes about to charge into battle, a snide remark before the chaos erupts. In music, silent moments speak as loud as the booming fanfare. In Overwatch, that silence is the tepid reveal of character, the nibbly-bits of lore, remarks on a massive and inspiring backdrop before the action begins.

It’s hints of detail like this that would seem foreign to any other first-person shooter, and the many ways Blizzard subverts — or even ignores — the prewritten formula of games makes Overwatch something interesting, compelling, and innovative. A shooter made by a team that’s never made one before, and it’s easily the most enjoyable multiplayer experience in years.

With every death comes honor. With honor, comes redemption. – Hanzo

The universe of Overwatch is in disarray. After a long war between humans and the robotic life they created, the world struggles to accept the coexistence of the biologic and the technologic. A terrorist group threatens danger at every turn. Gangs run the alleys, as riots erupt in the streets.

Overwatch, a superhuman oversight group that once protected humanity, has been disbanded for a long time. As each member has drifted away into their own lives, some decades later, the world needs them again.

The roster is quite varied, from the explosive Junkrat to Starcraft pro gamer-turned-mech pilot D.Va.

Of course, all this lore is hidden in the nooks and crannies of Overwatch proper, content to reside in spare bits of dialogue or simply in the world itself. At its core, Overwatch is still a game, and must commit itself to being that over something more akin to a Marvel film or comic book; but the ways it does so works wonder, in ways that both support the idea of the game itself and the transmedia campaign surrounding it.

Hanzo and Genji make remarks to each other about their shared history, one that’s revealed further in the animated Dragons short. Junkrat and Roadhog are a tag-team wrecking crew, but you would only learn their story by reading through their respective comic on the Overwatch site. Story is optional, but in a way that rewards those who want to know, yet doesn’t hinder those who abstain.

Regardless of your background with Overwatch, the game oozes lore and personality in every corner. The aesthetic and details reinforce a living world, one of heroes and crisis, honor and redemption. It makes for not just an interesting tale, but a world and lore you feel compelled to explore and spend time in.

Of course, Overwatch is a game, and as an arena shooter, it holds up well. Responsive controls and tight mechanics keep the chaos frantic, yet you rarely feel held back by the limitations of the game. It’s a system made for mouse and keyboard, though controllers can fare as well with a little help from aim assist.

Matches play out in a series of objectives, with one team on attack and the other on defense. Attackers push to seize objectives, whether that’s pushing a payload across the map or holding a control point for a certain amount of time. There’s six spots for players on each side, and to take the point or hold it, you pick one of the many heroes of Overwatch as your avatar.

Tanks often clash at the point, taking massive swings at each other for control.

The cast of Overwatch is incredibly varied, roughly segmented by designations like “attacker,” “defender,” “tank,” and “support.” Within each class, styles vary, and the intrinsic lore of each character plays heavily into creating a diverse roster. Tracer zips around with her mastery of time, blinking in and out of firefights. Reinhardt hefts a massive shield up to block oncoming attacks, providing a bulwark for his teammates to hide behind. Soldier 76, your typical clone-soldier character who relies on his trusty assault rifle and sprint, still feels just as unique and at-home as the Western gunslinger McCree, or deadly sniper Widowmaker.

Each hero has two skills on short cooldowns, their tricks that build their playstyle further, like Roadhog’s hook or Hanzo’s different arrows. As you achieve objectives, assist your team, and kill the other team, you build up an ultimate meter that gives you access to a massive, game-altering ultimate. Mei summons a blizzard, Junkrat lets loose an explosive remote-controlled tire, and Pharrah rains justice (read: missiles) from above.

Imagination is the essence of discovery. – Winston

It’s easy to read the set-up and let your mind drift to thoughts like “hero shooter” or “MOBA,” or even move closer to games like Team Fortress 2. There’s a lot of trappings here that might lead you to dismiss Overwatch, but like other Blizzard games before it, this game finds ways to create something new and unique by amalgamating the many and ignoring limitations.

Ultimates are not metered by cooldowns or resources, but are earned through assisting the team and participating in the game. In-game hints and tips actively encourage you to build a synergetic composition, while not pigeon-holing you into certain heroes. It might suggest you switch to a support or builder archetype, but there’s several options to do so.

Nothing is more satisfying than a good Roadhog hook.

Even the concept of hero-switching is a new and interesting mechanic. Given that most games that strive for character-driven, MOBA-esque gameplay encourage “main-ing” heroes, playing one for a significant amount of time and slowly increasing their power, Overwatch lets you freely switch at any time. Soldier 76 not working? Maybe Genji could assault the point better. Your team is lacking a beefy front line, or a dedicated healer? Go ahead and switch to D.Va, or Mercy. Removing concepts like levelling and item shops, and keeping skills simple and intrinsic to your hero’s gameplay loop means you’re not just free to experiment and learn, you’re encouraged.

Heroes like Widowmaker require skill, but reward it with key eliminations.

Even little touches, like the Play of the Game highlight at the end of every round and the player cards that recognize achievements on both teams, letting you upvote players for performing well, helps to reinforce a community more focused on playing than necessarily winning. This is a lax game that you can jump in and out of with little investment, easy to boot up on a whim and not be beholden to for the next hour as you eke out a long-fought victory. Matches often go for ten minutes at their peak, and still feel as rewarding as some of my hour-long victories in other games.

The true enemy of humanity is disorder. – Symmetra

If anything, my faults with Overwatch lie more in personal preference than any real, tangible change that would overall improve the game. Small user interface changes, like being able to merge groups, would be nice for group players. The levelling system can become cumbersome as time goes on, though it does little more than give you a loot box every time you level up.

These loot crates are the only semblance of microtransactions in Overwatch; as all heroes and maps are free to all players, the only thing left is the assorted cosmetics like skins, highlight intros, voice lines, player icons, and sprays that you can tag the battlefield with. You receive one free box for every level up, containing four different items, or you can purchase extra crates in the shop. It’s completely independent from the gameplay, only changing looks and appearance, and those who abstain from ever putting money above the buy-in price will still get them for free every level-up. That said, there’s still those who get upset about any microtransaction, so it’s worth noting.

Skins get quite elaborate, and you can earn them simply through playtime.

It’s also difficult to assess the “lone wolf” factor for Overwatch. Though it is a team, objective-based shooter, there’s always the question of whether the solo players will be able to enjoy this game. I can say I’ve enjoyed my personal time with Overwatch as much as my communal time, but I vastly prefer the latter, if only to gloat about my perfect Hanzo ult or complain about Bastion to those who will listen. Still, many of the aspects of Overwatch are more open to the lone wolf player — being able to switch heroes to accommodate team play, several different “ping” commands to indicate when you want to attack or when your ultimate has charged, and the quick match times and built-in voice chat all make it easier than normal to feel a part of the team.

True self is without form. – Zenyatta

Overwatch is many things. It’s an objective-based hero game, a cosmetic collector, a wide universe open to plenty more story, while also being an arena shooter with tight confines. There’s so much to explore outside this world that an arena shooter almost feels too small, yet that limitation pulls out the simply spot-on execution of every aspect.

Overwatch is a shooter made by a company that’s never worked on this kind of game before, yet that means there’s no stumbling blocks they have to careen around. This new Blizzard title feels effortless, and already feels like another addition to their list of seminal, necessary releases. It doesn’t necessarily reinvent the wheel, but the way it polishes, presents, and executes is well above and beyond standards. Easily one of the most necessary multiplayer experiences of the last few years, and a shot across the bow at shooters complacent in their defined expectations: whatever you do, Overwatch does it better.

A sublime execution on nearly every front, Overwatch turns a world in need of heroes into one of the best arena shooters since their heyday, and stands alongside Blizzard’s finest as some of the most necessary playing in its respective genre.