Many games have you control one character at a time, whether it be through only having one available or performing actions with them one by one. Why not up the challenge and test your hand-eye coordination by controlling two characters at the same time? Super Weekend Mode revolves around that idea and even though it’s challenging, it’s an entertaining experience.

Super Weekend Mode doesn’t have much of a story besides what you can glean from the short segments in-between levels. The story seems to follow a princess as she is constantly chasing down a thief who stole her belongings. You only see the princess and thief during these short segments, and it’s sort of cute watching the princess jog after the purple-clad burglar. 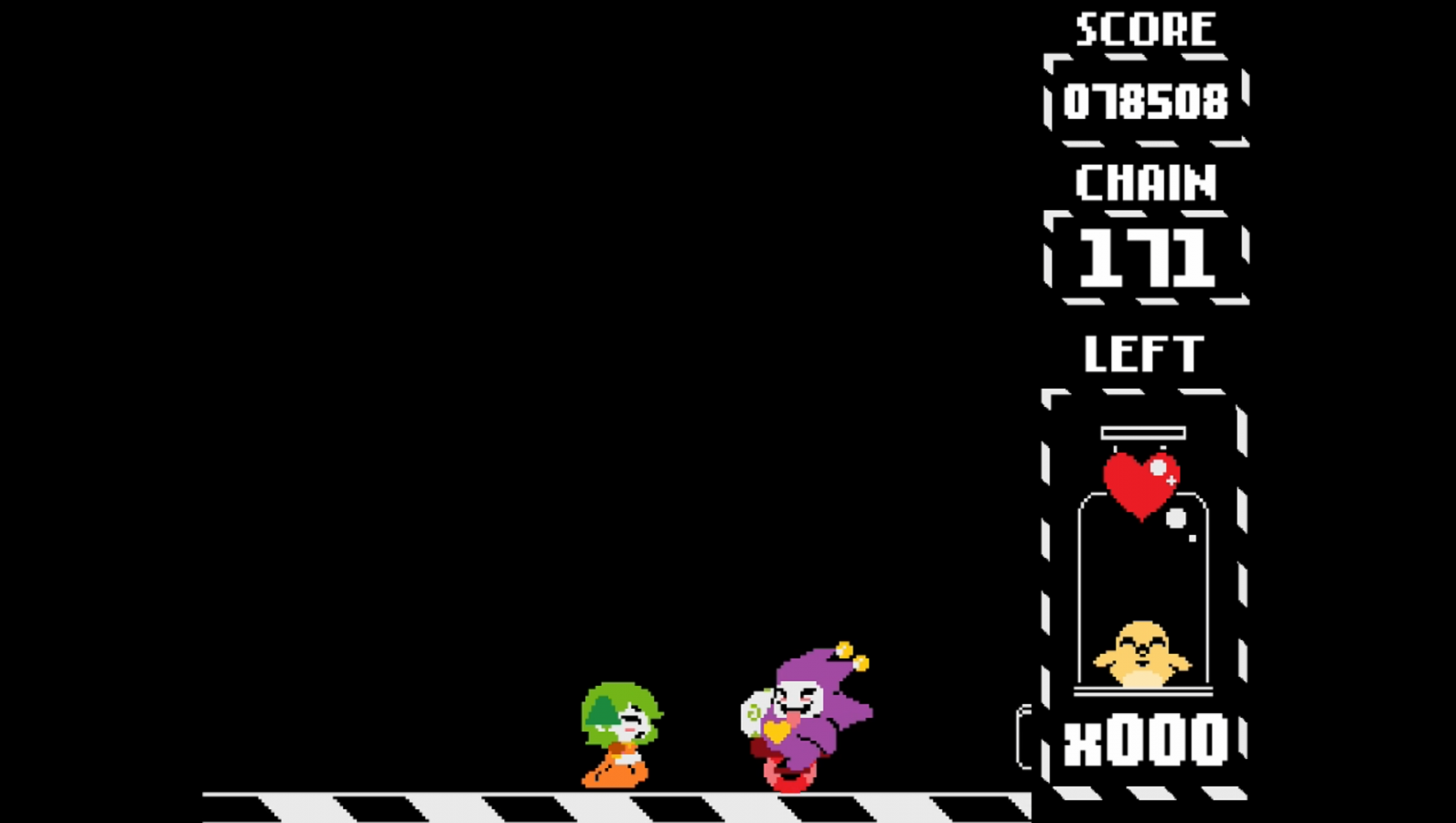 The game features nine levels of boss fights as you attempt to beat them all; losing against any of the bosses forces you to start your run over again. The boss fights take the form of two ships firing lasers at the boss. The screen setup is reminiscent of Tetris, but you have ships at the bottom of the screen and the boss at the top of the screen. By default both ships are set to auto-fire, but if you want an extra challenge, you can turn auto-fire off. I recommend keeping it on because you’ll need to focus on moving your ships in order to survive.

Both ships start off side by side in the middle spots on the bottom of the screen. These spots are the only places where your shots can hurt the boss, so you’ll want to keep them there as much as possible. Each ship has another spot on its other side that it can move to with the press of a button. As you play, hearts, dust bunnies, and skulls will randomly come down from the top of the screen towards the bottom. You need to collect the hearts because every time a heart hits the bottom of the screen, all on-screen projectiles fall away and spikes at the top of the screen slide closer to your ships. The same punishment results from missing dust bunnies, but dust bunnies need to be knocked away instead of caught; you do this by moving to the space next to it and then sliding at it at the right time to knock it away. If your timing is off or they hit you directly, you lose one of your three hearts. Skulls thankfully don’t cause the spikes to move when they hit the bottom of the screen. They need to be avoided entirely or else you’ll lose one of your hearts. As with the hearts hitting the bottom of the screen, getting damaged also causes projectiles to fall away. 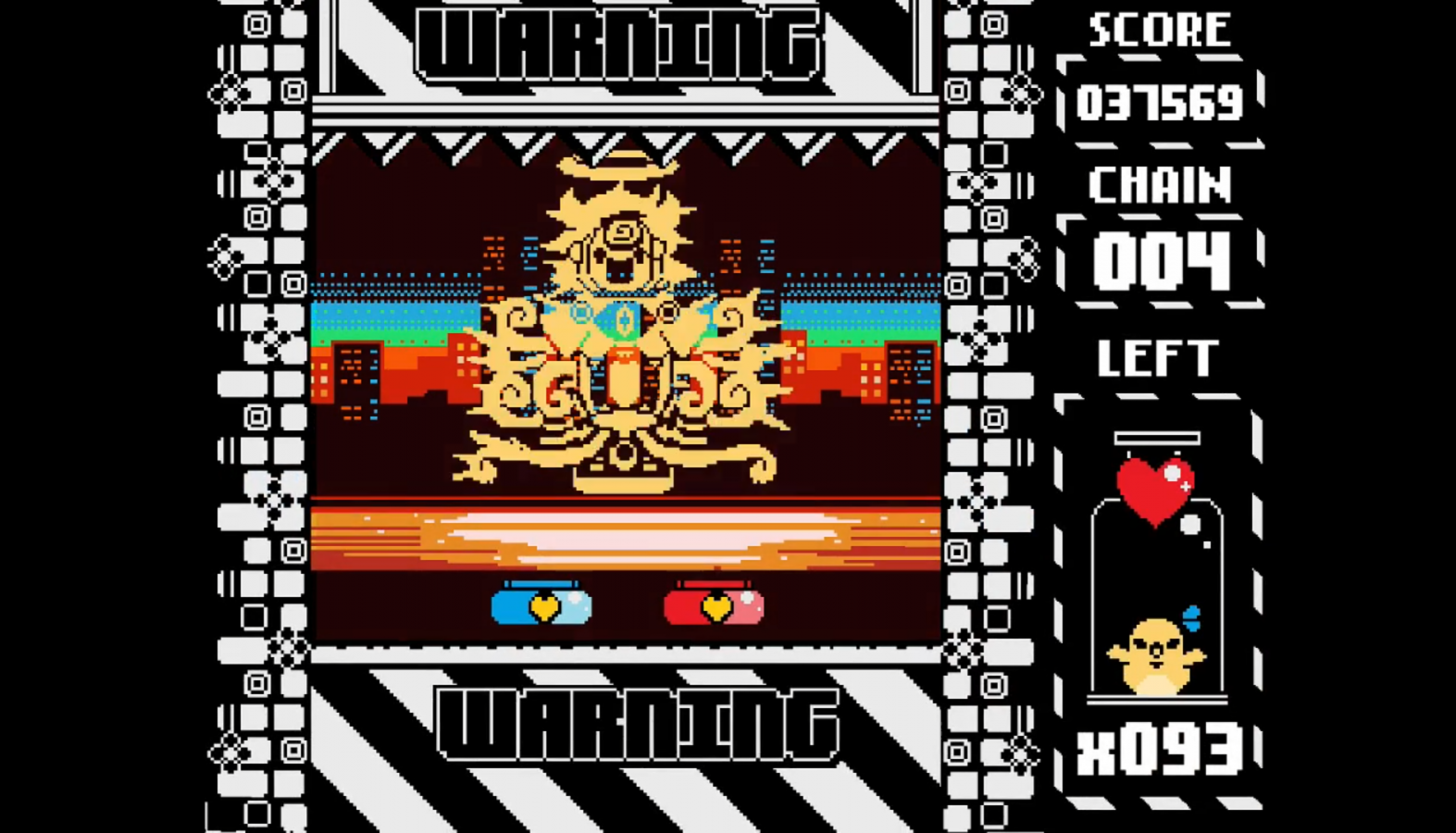 The bosses don’t have health bars, but they do have numbers that represent their health on the side of the screen. This number shows the number of times that the boss needs to be damaged before it will die. It’s different than the typical health bar, but I actually liked this idea a lot. It made it much easier to determine how close you were to defeating the boss. After their health is lowered to a certain point, each boss freaks out and powers up. From here on out, the projectiles become faster and more dangerous. You need to focus much more during this home stretch unless you want to get wiped out. The bosses are interesting to look at as well, including creatures such as a mermaid, a warrior, and a dragon. Defeating a boss rewards you with random power-ups such as health, increased speed, increased shot damage, and more.

The gameplay is simple to learn but difficult to master. You need precise hand-eye coordination and quick reflexes in order to succeed. Super Weekend Mode looks charming and easy at a glance, but it gives you a run for your money. Collecting hearts, knocking out dust bunnies, avoiding skulls, and shooting the boss all while controlling two ships separately is quite a challenge. Unless you’ve got a knack for games like this, don’t expect to beat all nine bosses on your first try. Part of the fun is learning from your mistakes and slowly adjusting to the game’s speed. Defeating a boss that previously beat you down feels great. 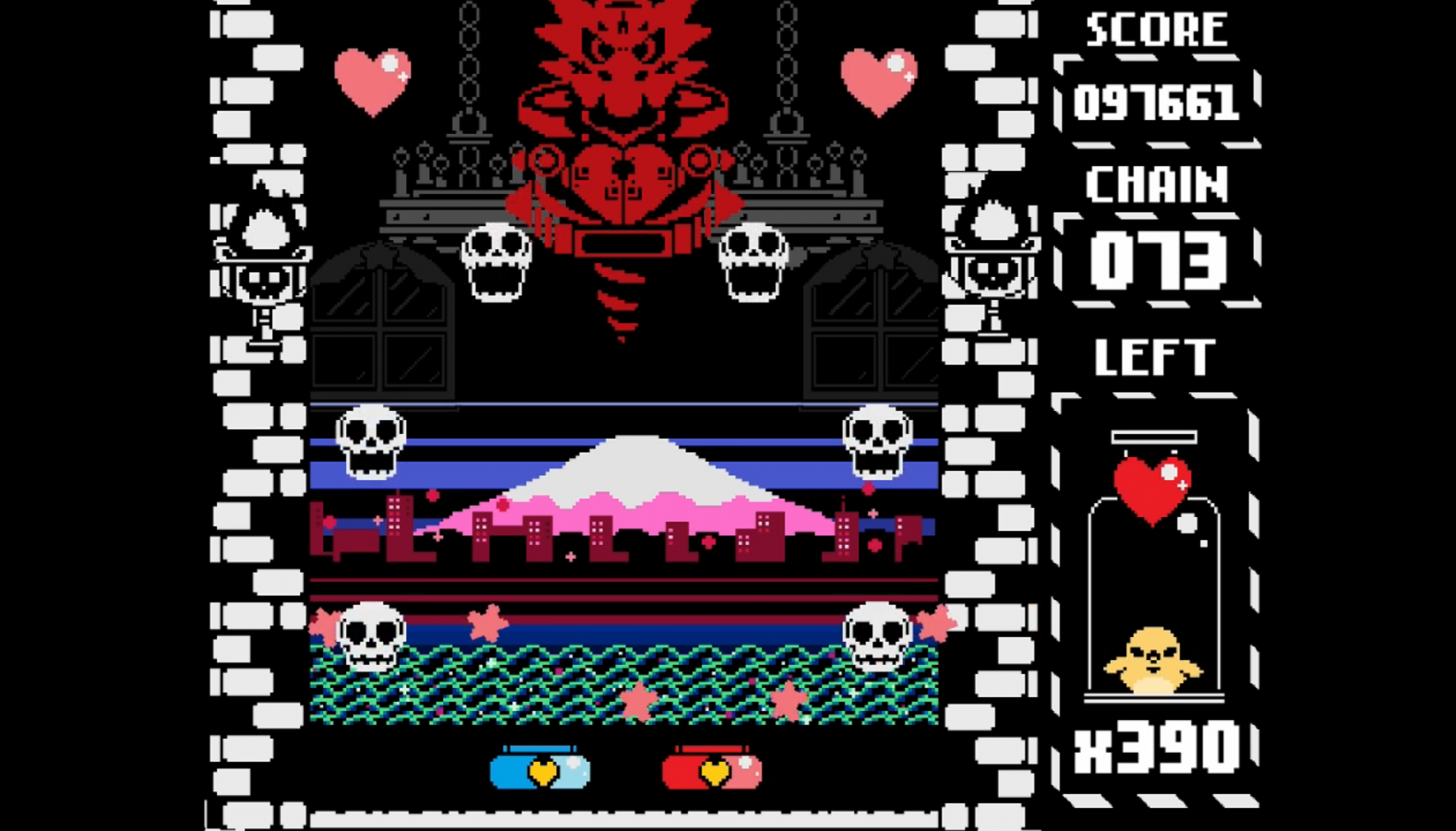 A nice touch is being able to choose between several princesses, each providing their own benefits. For example, one princess starts each level with a barrier on each ship. These barriers protect against one hit before breaking. Another princess makes your ships move faster, allowing for quicker reactions. I’ve gone through and played as several princesses and you can see the differences as you play. All in all, with the simple yet charming aesthetic, the hectic reflexive gameplay, and the challenge of controlling two ships at once all mesh together to create a tense yet entertaining game. Super Weekend Mode is worth the five dollars that you’d spend on it, especially with how long you’ll likely be facing the bosses.

Super Weekend Mode is a tense arcade-type shooter that tests your hand-eye coordination and reflexes. The simple and charming aesthetic hides the true challenge within, but that is one of its strong points.

Codi loves to play video games and watch movies. He will watch almost any kind of movie just to experience them. His ideas take inspiration from the shows and movies he watches, and games he plays. He also loves a good pun.
Related Articles: Super Weekend Mode
Share
Tweet
Share
Submit