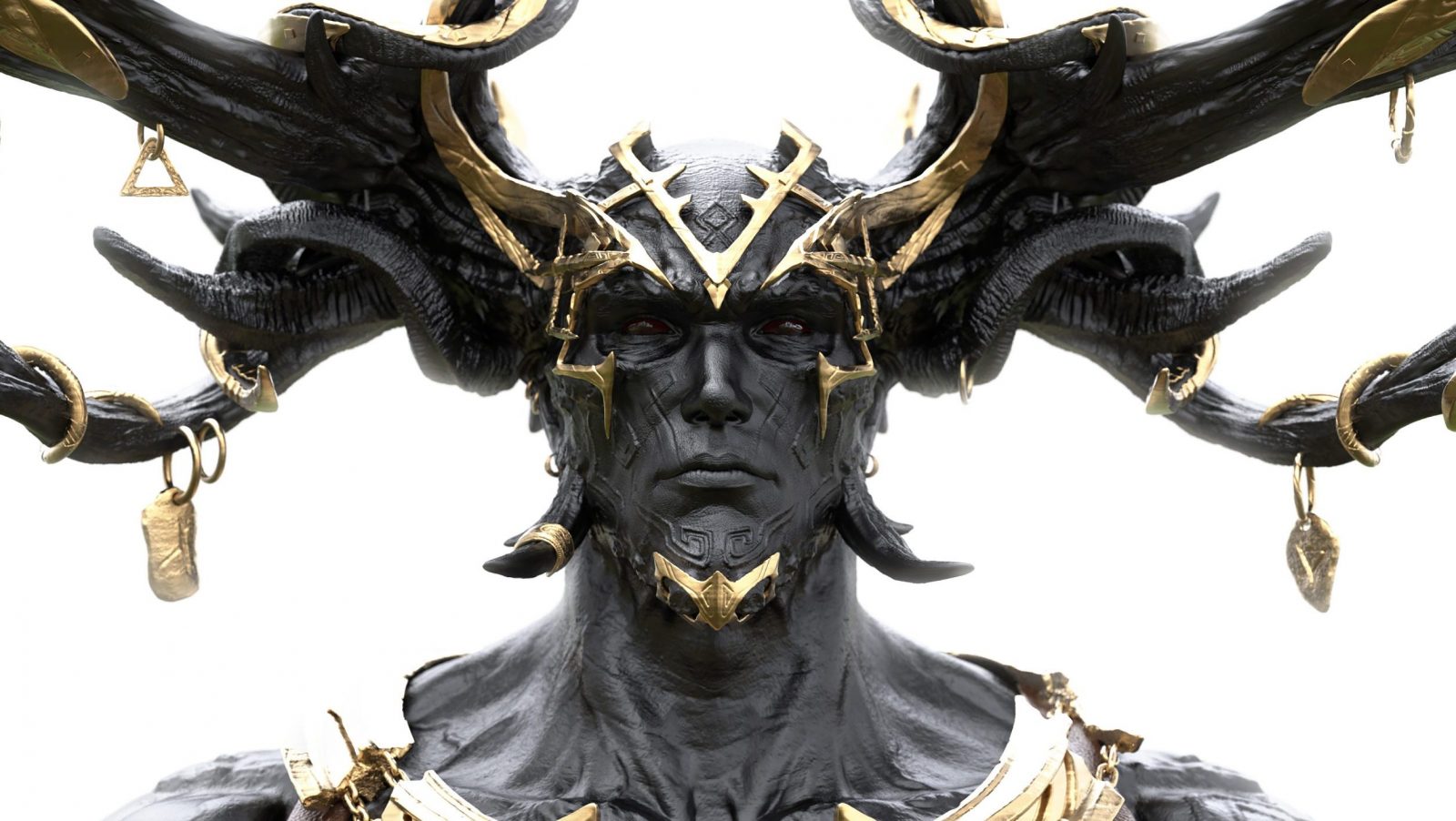 The world of Midgard is under attack and the God of mischief has finally and forcibly taken the mantle as ruler. Loki, the trickster of the gods has taken over, and has Midgard hanging on a thread of eminent destruction. Laying waste to Midgard and damning everyone to Hel, all that stands between survival and certain death is you. Heimdall, last of the survivors, has called upon you to rise and strike back at the heart of evil. Rune 2 is a game entrenched in rich, deep Norse mythology, and it’s clear that the story is where the developers focused most of their attention. I’ll try not to spoil many of the plots and missions because it’s something that you should experience for yourself. Unfortunately, it feels that much too much of the development was spent on the story and not on making sure the game launched as bug-free as possible. My experience with the game is a tale of two stories: one where the game was riddled with glitches and game breaking bugs – and the other – seamless gameplay where I was able to experience the game at its best. With its hack n’ slash combat, RPG crafting mechanics such as forging new weapons, new armor, Runes, and a simple leveling up system, all you need is to prepare yourself for an enthralling experience. With a local and online-multiplayer mode for you to take on by yourself or with friends, with up to four players, Rune 2 offers much of what its competitors cannot.

To start, I had the most inconsistent gameplay in local mode, which led me to create two save files. Like most RPG’s, you get to craft your hero. Though its character creation system is not as in-depth as some other RPG’s, the presets available are more than enough to make your character look like a badass warrior. The game throws you into Midgard with not much to survive on, and it feels a bit overwhelming, but that’s the point. You are supposed to feel as if your back is against the wall, and I did. Though Midgard has been virtually destroyed and all appears to be lost, the world feels lived in and forever changing. With a few surviving wildlife running across my path, the ever-changing weather mechanics that will play a part in survival, a day and night cycle, and scavenging bandits ready to slit my throat, I had to be on guard the moment I dropped from the Bifrost.

Plucking a rusty sword from some unlucky bastard’s chest, I was tasked with building a longhouse, a safe-haven where I could craft and weapons and armor, repair weapons and armor, cook food for health, and find safety in this world of chaos. But to do this, I had to scavenge the world for the necessary crafting materials. During both playthroughs, when scavenging for materials, I experienced inconsistent bugs when gathering. During the first playthrough, while mining for copper, none of the rocks I mined would crumble after mining them, which allowed me to mine them as much as I wanted. This enabled me to level up to level 7 within twenty minutes of gameplay. During this odd occurrence, I was also able to oddly bypass many of the early missions that I was supposed to encounter, and this was proven during my second playthrough on my second save file. Though I experienced different bugs through both playthroughs, only some were consistent with both, which I will touch on later. 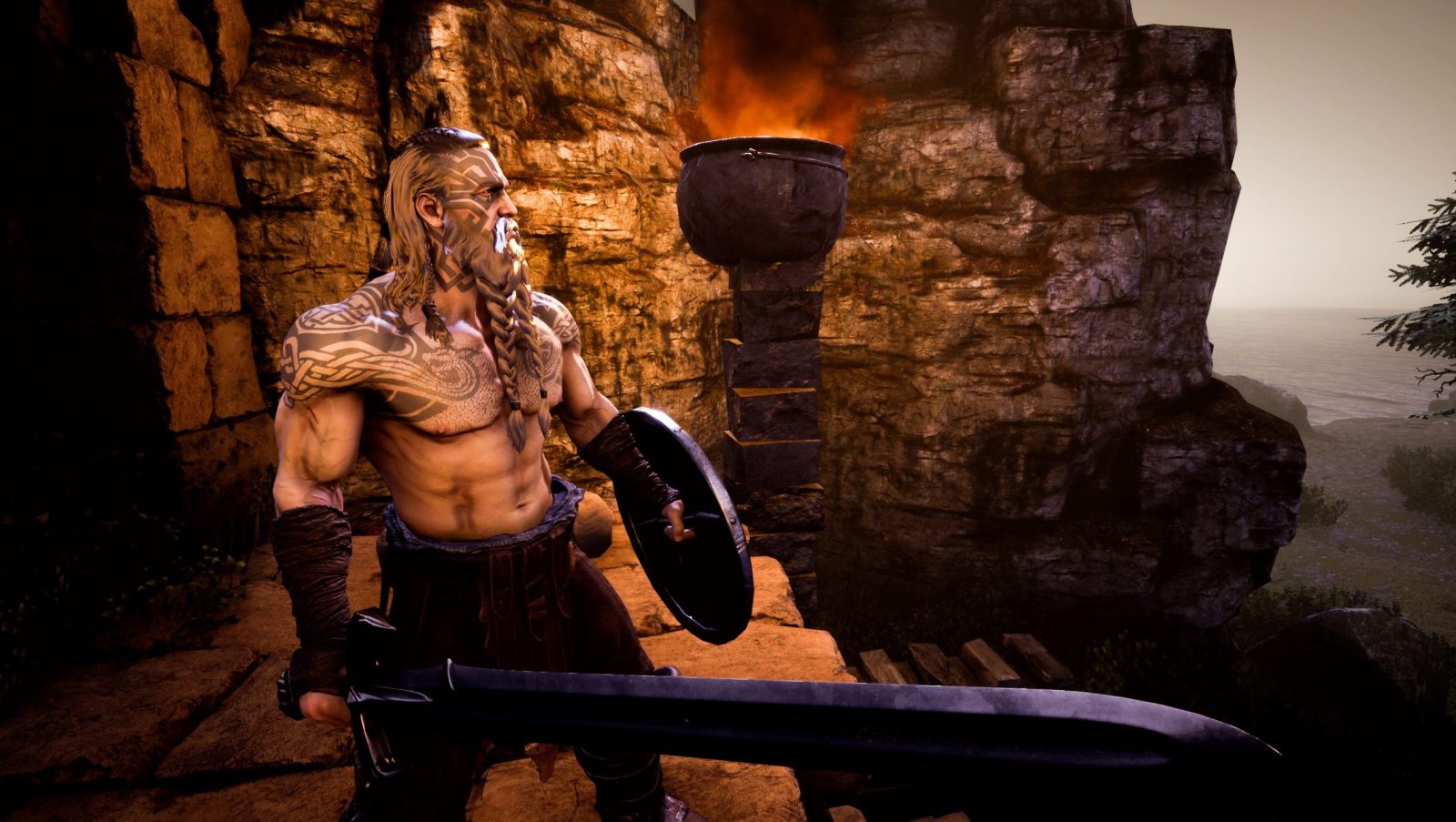 Built for the fight

As I explored what was left of Midgard, it was clear that a war had been waged well before I was chosen to stop Loki. Bodies mangled and discarded, giants impaled in the ground, and blood-soaked earth told the tale of destruction. After chopping down a few trees and finding the materials to craft my longhouse, building it is as simple as locating the dilapidated building and using the wood to build it. At this point, Heimdall chimed in to explain how to use the forging station, camp fire, crafting station, and storage. With my first mission being to cook two lizards, I opened my inventory and found lizards that I had caught while chopping wood. At this point, the game doesn’t make it clear as to how to cook food. Clicking on it, dragging it over the pot, or adding it to your quick menu doesn’t’ do the trick. There’s a non-intuitive icon next to the item in your inventory that you click to use the item. Its design doesn’t make it stand out from the rest of the menu, and it’s the little things like this that the game doesn’t get right. The game often feels incomplete, rough around the edges, and having a split personality as to what type of game it wants to be.

Finding lizards, deer, boar, and other creatures in the world will give you more than enough to survive on; and with the way the combat system is constructed, having an abundance of food and health increasing runes is a necessity to survival. Once I got the hang of the crafting system, its management simplicity is what makes the game much more approachable than its competitors. The inventory menu is easy to manage and navigate. Need to only view armor, you can select the armor icon at the top and the menu will highlight all of your armor. Mind you, I was using an Xbox One controller to begin with because I thought it would have benefited me in combat, but the way the systems are built, using a keyboard and mouse is ideal in combat and accessing the inventory. Plus, all the game’s features can’t be accessed using a controller. 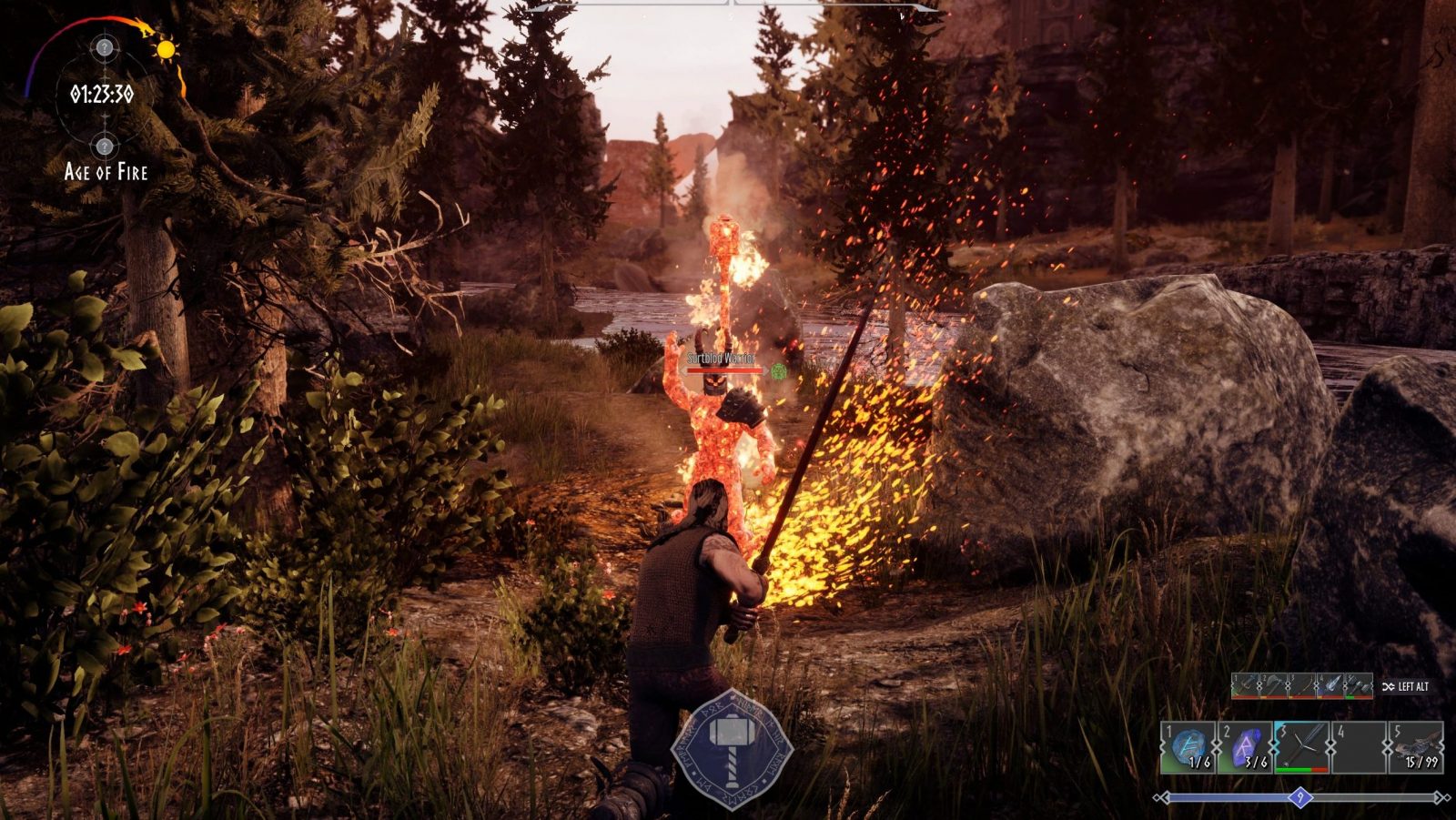 Finally setting off in the world, Heimdall often chimes in to give backstory on Loki, how the gods have been forsaken, and why he needs your help. While embarking on the next mission to destroy the binding rune stones around the desolate island, I encountered a group of bandits that were having a skirmish with a wolf. Taking notice of me in their camp, the music ramped up and an all-out brawl ensued. The combat is a basic hack n’ slash combat system. With a limited amount of endurance, you have to fight smart, which is confusing because one thinks that a hack n’ slash fighting system implores one to go all in – but in doing so, you will certainly die. Using the environment to break up the bandit group and attacking them once separated was the key to survival. I found this to be the case when fighting all enemies – space them out and you’ll survive to fight another day. Even some of the massive enemies you’ll come across must be handled with the greatest of thought and care. Circling a tree, using the environment, or finding an animal to distract your enemies are all ways to get a one up on them. During both playthroughs, I experienced issues with blocking and attacking, regardless of what input device I was using. More often than not, when I tried to block, my character would rather commit suicide and do nothing. I would have to continuously press the block button to get them to react, and this would occur in combat and out of combat. This occurrence continued throughout the completion of the game, and it wasn’t a bad keyboard as I swapped it out three times.

The missions are fairly straight forward and usually lead you to other side quests and items in the world. As I expressed earlier, there were some inconsistencies that I found in both playthroughs. While scavenging, I would find chests in the world. Searching them netted me food, armor, weapons, or other items of use, but it’s what the chest does after looting them that confused me. Oddly, they blink after looting them, which I thought was odd because you’d think they would blink to get your attention before looting them, to let you know something was in the area. Seeing this off in the distance often made me go explore, and to my surprise, it was an area I had already been to and searched.After destroying the binding stones and retrieving Heimdall’s broken Gjallarhorn, I was whisked away to an alternate world where I was confronted by Loki himself, not in person, but through the game’s narration. It was confusing because I had no idea I had been whisked away to a different dimension at the time. The world simply took on a blue tint. The transition was oddly abrupt and sudden that the game’s audio began clipping and Loki’s voice was subsequently drowned out by the broken audio. I had to reload the last checkpoint so that I could understand what was occurring. It’s these bugs and inconsistencies that often took me out of the experience and ultimately forced me to create a second save file for another playthrough. 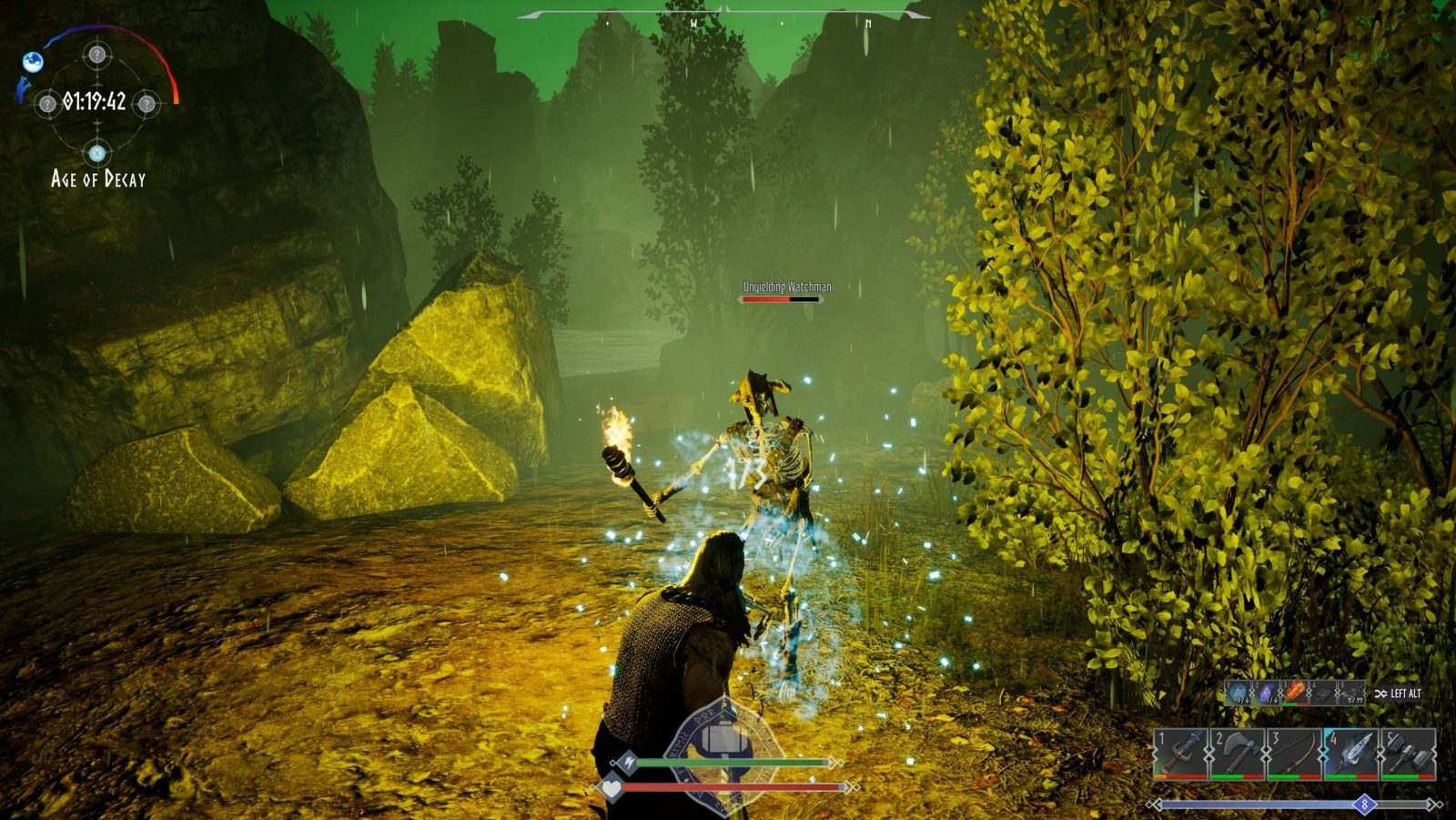 Taking the fight head on

Though the story is amazing and is rich in Norse mythology, and game mechanics that support it, the game is plagued with bugs that crop up too often. Hell, I couldn’t even walk through the forest without a tree suddenly loading on top of me and doing more damage than a bandit stabbing me with a sword. However, the game is definitely something to experience as it offers a unique playstyle for an RPG. It’s quick, jump in and out play style lets you experience the game even when time is of the essence. I only wish more time was spent on quelling the game’s glitches and game breaking bugs.

Rune 2 is an impressive game that has a lot to offer casual and RPG fans. With its simplistic inventory and crafting system, it’s easy for players to grasp. It often feels like a bunch of stories and ideas packed together to attempt to make a cohesive story. Along with the bugs and glitches, it was hard to get a consistent feeling of where the game wanted to go. Maybe with a few updates the game will offer a more consistent experience.

T.K. is a freelance writer, narrative designer, and author. Writing and developing narratives and giving voices to digital world and characters is his passion. As a game writer, QA game analyst, and editor for Gaming Trend, he enjoys being a part of the gaming industry.
Related Articles: Rune 2
Share
Tweet
Share
Submit