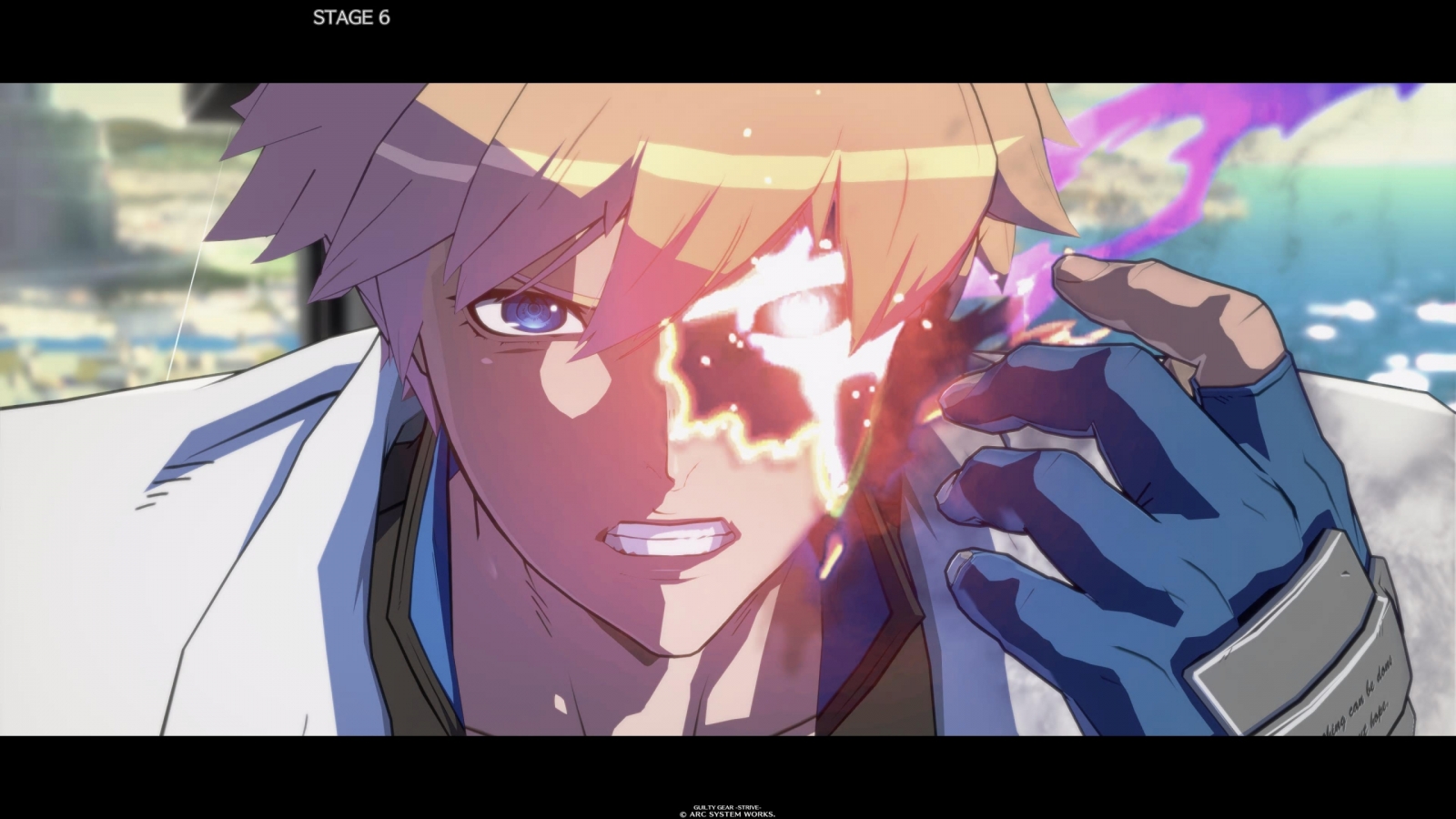 Arc System Works is on a roll. They’re released hit after hit the past few years with the fighting game genre working its way back into the mainstream. From Dragon Ball Fighterz to Granblue Fantasy Versus, there’s something out there for everyone. The Guilty Gear franchise has been going strong since 1998 and the latest entry, Strive, is in the perfect position to become the fighting game of choice for many with its gorgeous visuals and animation, varied roster of characters, and lack of much competition on PS5 specifically. So grab your comically large swords, magic guitars, and cross shaped tonfas – let’s get sweaty.

Strive is a five button fighter, and surprisingly simple to grasp for newcomers such as myself. Square is punch, Triangle is slash, X is kick, and Circle is your heavy slash. In addition, R1 serves as your launcher or throw move. Pressing these buttons in combination with directional inputs or each other performs different moves depending on the character. For example, Giovanna has a quick jab with neutral punch, but pressing forward at the same time will cause her to advance slightly with a heavier jab. Other moves rely on slightly more complex inputs like quarter circles, but in this case I found these a lot easier to pull off than most fighters. It could be that I’m getting slightly better at the genre or even the PS5’s D-Pad, but regardless this allowed me to focus more on what makes fighting games fun: reading your opponent and countering their moves.

The true joys of this genre come from a place very similar to real life sports, competing against a real person with the exact same tools available to them as you and strategizing a way to defeat them. In fighting games, this can come from observing how your opponent reacts to your attacks or simply playing footsies, jockeying for position to gain control of the flow of the match. After the decent initial tutorial and a few minutes in training mode to get a handle on your character, Strive throws you right into the thick of it to get at that good stuff. Fighting against the AI in particular has proven a fun challenge. In arcade mode specifically, the difficulty appears to adjust itself based on your performance in the previous match so it always feels like you and the computer are at around the same skill level.

Unfortunately, Strive has quite a few moves that require more complex inputs, at least one or two on every character. These aren’t anything as bad as a pretzel motion, but even so I could never pull them off reliably. While Strive excels at getting straight to the fun of the genre, a lot of players such as myself won’t be able to take full advantage of a character’s moveset thanks to these complex inputs you need to be able to pull off in a split second. It’s a shame, especially with a much more accessible example put out by the same studio just last year: Granblue Fantasy Versus. And to be clear, this isn’t just an example of “get gud”, as because of this disabled players won’t be able to be as competitively viable as able bodied players. This is a genre wide problem that we’ve seen tons of solutions for, only to be thrown away in the next entry. Strive comes so close to allowing everyone to see and enjoy the fun, competitive spirit of fighting games, but this obstacle remains as a barrier to entry. 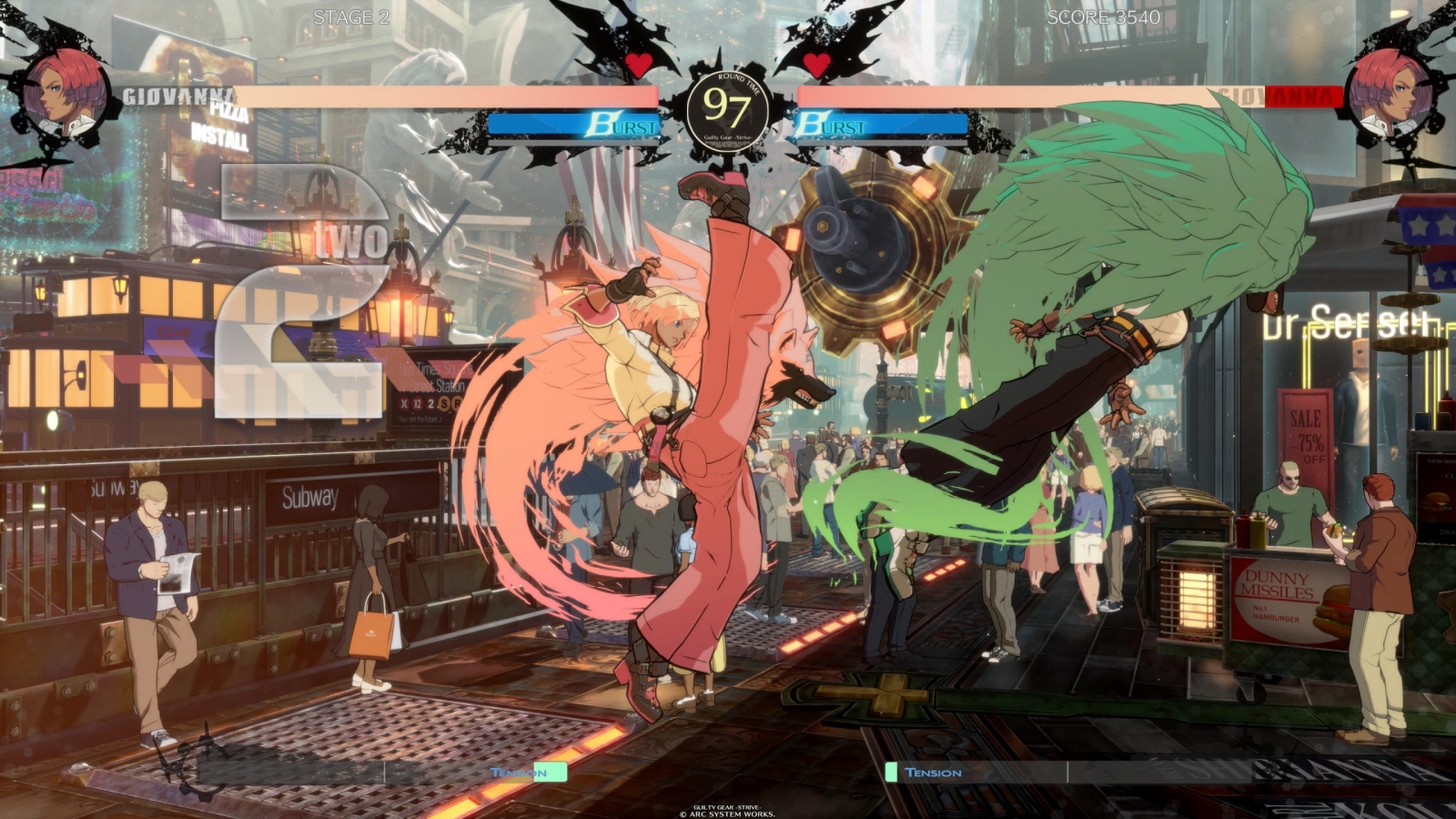 While I might not be anywhere near the level of anyone playing online, Strive is extremely satisfying to both play and watch. Animations are snappy and look excellent, with plenty of smears and other animation techniques along with punchy sound effects to convey the power behind each move. Every character feels unique with different playstyles, my three favorites are Giovanna, I-No, and Kai. Giovanna and I-No are categorized as Rushdown characters, able to unleash a constant barrage of attacks to wear down your opponent’s defenses, while Kai is a more Balanced fighter. Every fighter has a style assigned to them in the character select, even if some like the Unique Faust or the Shooter Ramlethal are in groups of one. It’s nice to get an idea of how a character should play before you even select them, but outside of that you’re on your own. There are no character specific tutorials to teach you even basic combos, and what tutorials are there barely explain anything outside of what button combinations do what, if you can even figure out how those work.

Outside of Arcade, Survival, and vs. CPU, GGS doesn’t have much to offer in terms of a single player experience. Arcade is a simple series of 8 fights (where a companion may join you for a 2 on 1 battle) and in Survival you see how many bouts you can win with only small heals in between. You’d think the story mode could make up for this (at least for a time), but it actually has no gameplay whatsoever and is just a 4 hour movie. Prior to launch, I only have access to the first chapter with only the Japanese dub (we were provided video with the english dub though), and I’ll be real with you: this makes no hecking sense. It starts with I-No breaking into a prison and stealing something from the sole prisoner, then it cuts to a priest looking guy with sneakers hitch hiking with the president of the United States? And Sol Badguy is an immortal bounty hunter hanging with his girlfriend who’s body is currently controlled by an AI? This plot is impenetrable for all but the most die hard fans of the franchise, and the extremely dense glossary and relationship chart only serve to make things more confusing. The cutscenes aren’t very well animated either, frankly it looks like some amature work in Source Filmmaker. I get that it’s impossible to ask for a high quality movie with my high quality fighting game, but even I can see that some of the movements are just simple transforms. Many of these animations don’t match the deliberately chosen frame rate of others, which just looks horrendous seeing this little effort put right next to some reused animations from the game itself which look incredible. Unless you’re heavily invested in the lore of the series, don’t go in expecting the game to tell you what’s going on..

Having said that, however, I can’t say there weren’t parts of the story I enjoyed. In particular, Robbie Daymond as Happy Chaos was a big highlight, he clearly had a ton of fun in this villainous role. Definitely make sure to update your game with the day one patch, because the english VO is great. Even if I could only loosely follow the plot, it’s a good enough time once you get past the animation’s inconsistency. It certainly didn’t need to be 4 hours long, but now I definitely want the President of the United States as a DLC character.

The online has a few interesting ideas, but feels similarly barebones. There are several lobbies you can enter, each one represented as a floor of a gigantic tower. The higher up you go, the stronger your opponents supposedly. Everyone is assigned a rank and along with it a recommended floor based on their skill level and, while you can’t enter floors below the recommended, you can head to any floor above you if you feel like getting your but kicked. Strive uses rollback netcode which i don’t entirely understand but compared to other fighting games the online here feels almost like your opponent is on the couch next to you. There’s still a little bit of delay or lag to get used to and the occasional hit that you swear should have landed, but for the most part it feels pretty good. The lobbies are basically it for online functionality though, even the quick match just puts you in a lobby while you mess around in training mode. The system could really use some sort of matchmaking or, well, anything else really. The lobbies serve their purpose well enough and the avatars are fun to customize (you can even be a centaur), but it feels like you spend a lot of time just trying to get into a match. 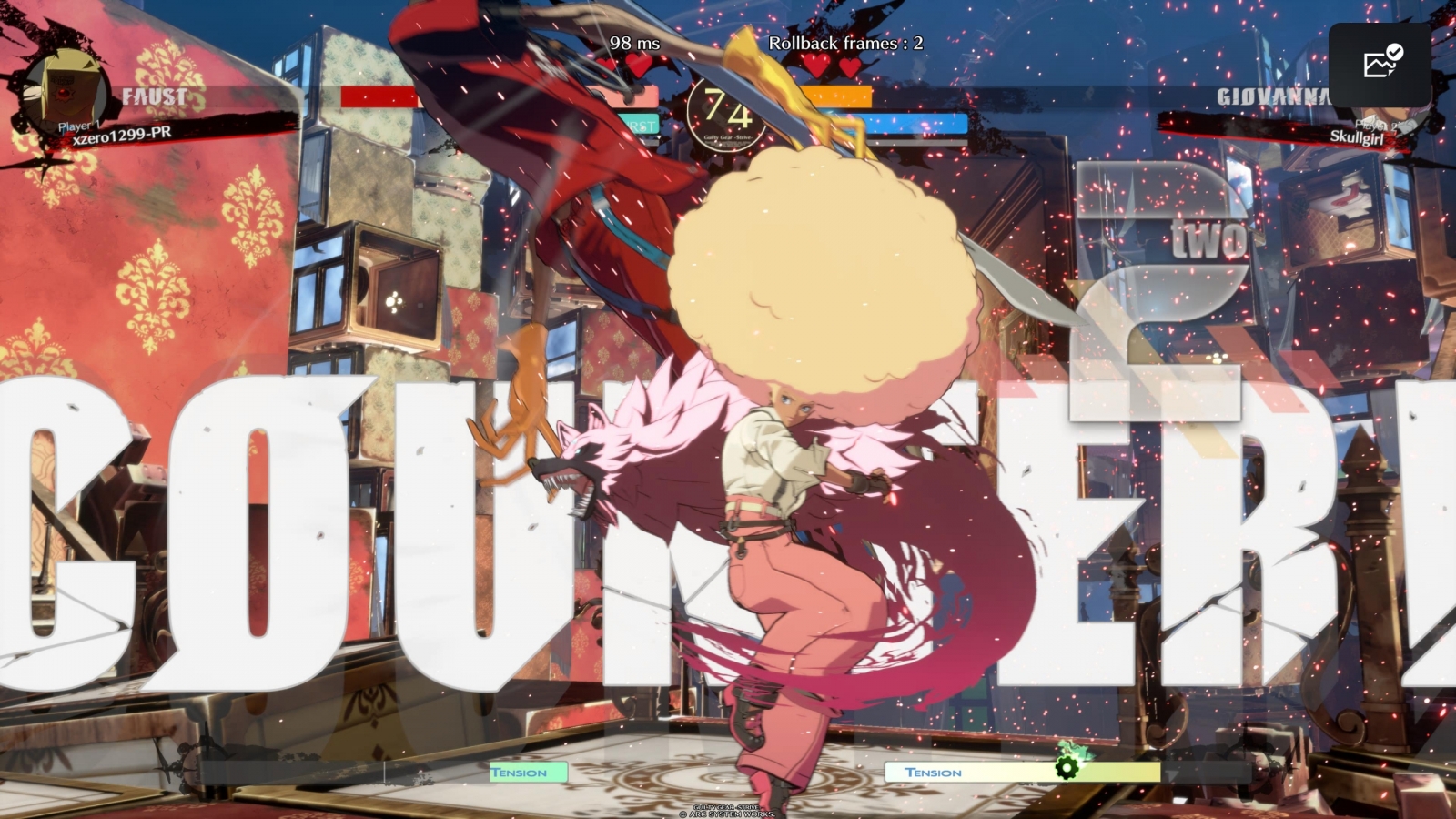 Finally, Strive’s soundtrack is certainly unique. It has a lot of hard rock which reminds me of Shadow the Hedgehog, and it serves well as a backdrop to intense fights. While I don’t think I’ll listen to it outside of the game, certain tracks like Smell of the Game never fail to get my blood pumping even while I get the shit kicked out of me online.

Guilty Gear -Strive- is an excellent fighting game with gorgeous visuals, but feels like it's lacking in content. There are essentially only three modes of play, arcade, survival, and online. While the complex inputs and lack of a decent tutorial will leave some players in the dust, fighting feels so good you won’t want to put the controller down.

David is the kind of person to wear his heart on his sleeve. He can find positives in anything, like this is a person who loved Star Fox Zero to death. You’ll see him playing all kinds of games: AAAs, Indies, game jam games, games of all genres, and writing about them! Here. On this website. When not writing or playing games, you can find David making music, games, or enjoying a good book. David’s favorite games include NieR: Automata, Mother 3, and Gravity Rush.
Related Articles: Guilty Gear -Strive-
Share
Tweet
Share
Submit