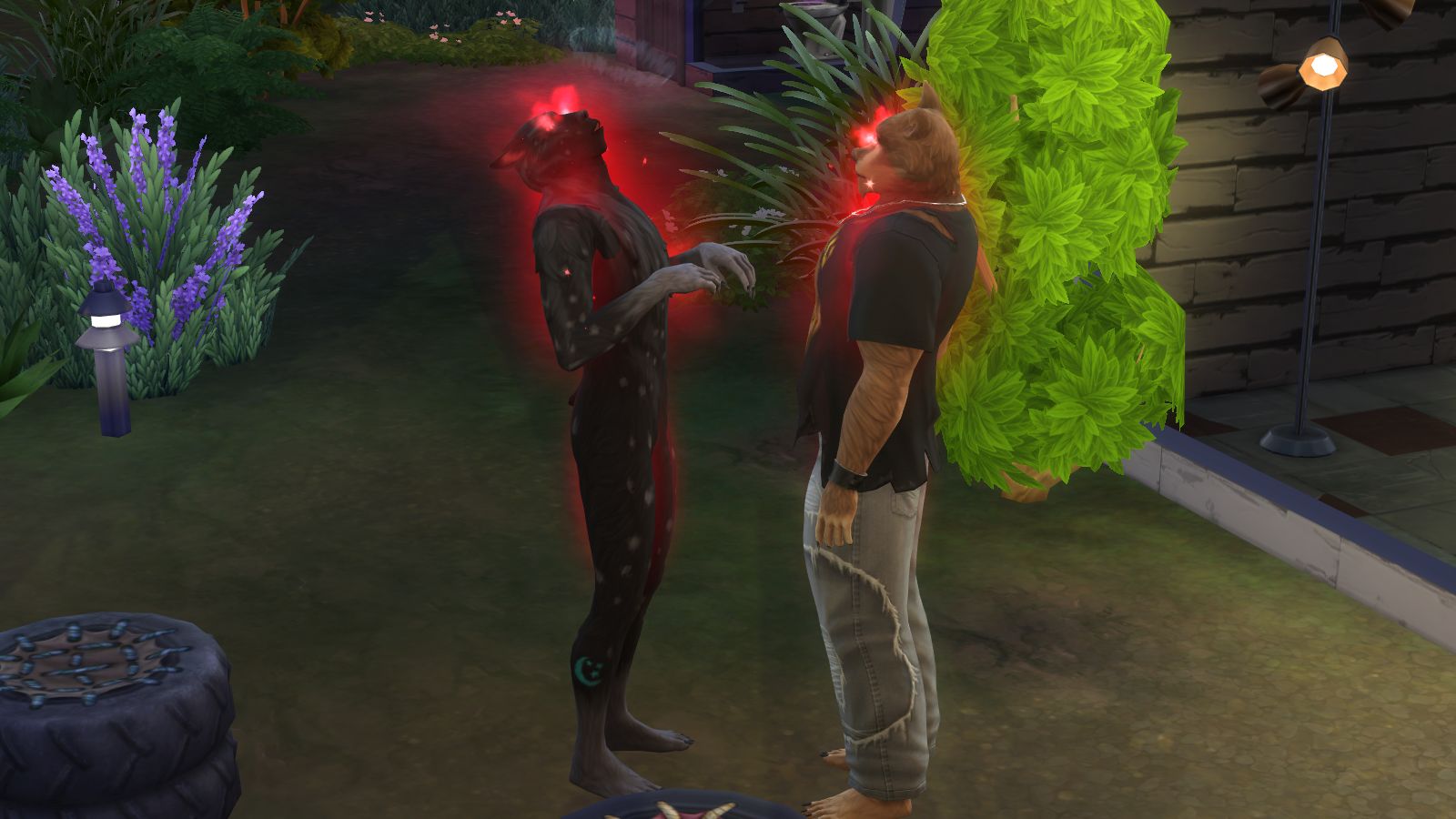 The Sims 4 Werewolves Game Pack released last week and I finally got a chance to sit down and play with it. I was pretty excited to get my hands on the full release after doing a preview of this pack a few weeks ago, which you can check out here. I’m always more drawn to the magical and supernatural content in most games I play, which makes sense because I am a dark-fantasy author after all. The Sims franchise is no different, I have gravitated towards the vampire, witch, and mermaid content the most. I thought I’d really love the addition of werewolves, and it’s been fun for the most part, but there are some things I just can’t get on board with.

There is a new map called Moonwood Mill which has a very Pacific Northwest vibe, and includes a library, two pack hangouts, and a community lot with food and entertainment, as well as a few lots to build on. I especially like the mist effects when the full moon comes out, it adds to the spooky wolfy ambiance. Clothing options go perfectly with the look and feel of Moonwood Mill. There are a lot of grunge looking options, as well as some ripped up denim to give you that freshly transformed look.

You can create a werewolf a few different ways, the easiest being designing one right from the Create-a-Sim user interface. The Sims 4 has added the ability to draw on the fur of your werewolf, as well as adding some stamps and stencils you can pop onto them. I didn’t play around too much with this, but my son thought it would be super fun if I put a poop stamp on the butt of my werewolf, which of course I couldn’t say no to. There are endless options for designing and coloring your werewolves, and it was nice to see the CAS menu with new customization. 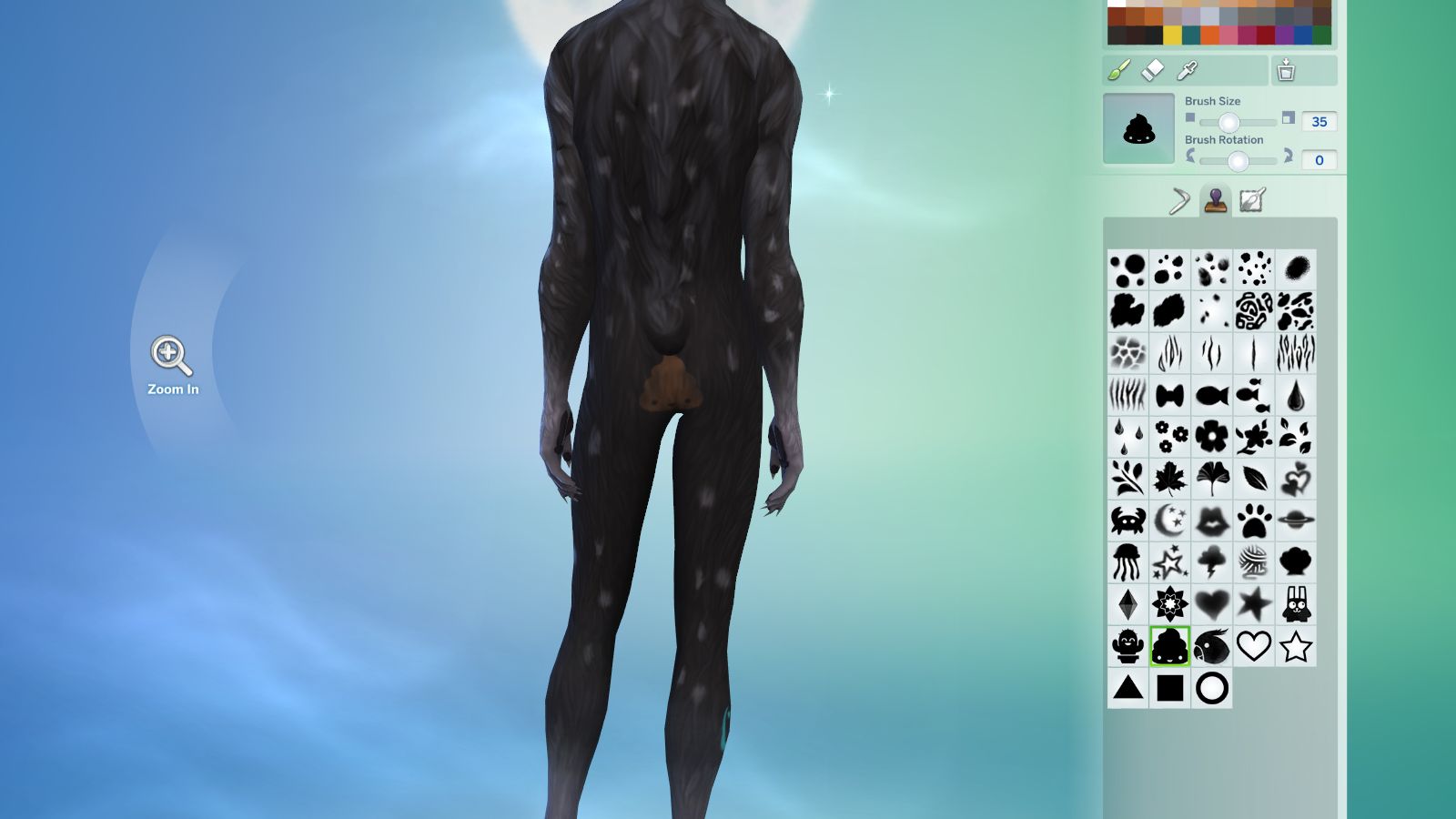 The other way to get turned is to get bit by an existing werewolf, which is what I did. I created Lily with the intent of becoming a werewolf, and chose the werewolf aspiration. One thing I know for sure, I will never pick the goofball trait again, because life was pretty miserable with her pranking her OWN toilet over and over again then getting upset because it explodes on her. Despite her bathroom mishaps, Lily knew she had to seek out the leader of one of the town packs as her aspiration, and after mingling at the local hangout it didn’t take long for Kristopher Volkov to show up. There are two werewolf packs that reside in Moonwood Mill; The Wildfangs, and The Moonwood Collective. Both have their own requirements along with the do’s and don’ts to remain a member once you’re initiated into the pack. 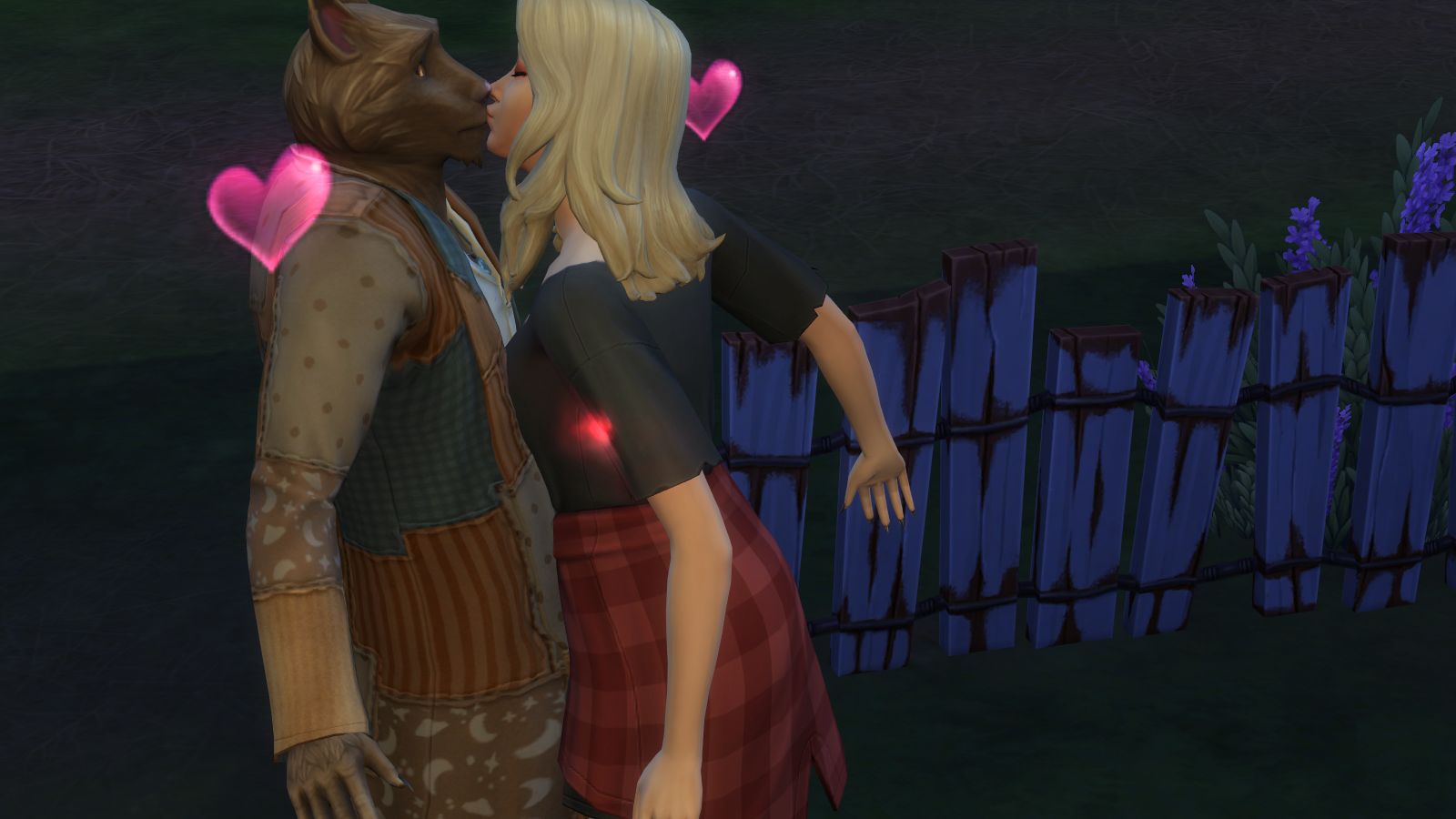 My Sim Lily thanking the werewolf who bit her.

It didn’t take long to earn Kristopher Volkov’s trust to have him bite my Sim. I found the glowing red bite mark to be a really cool touch, and patiently waited for the full moon to turn. One of the other new things with The Sims 4 Werewolves Game Pack are lunar cycles. These affect your Sims in new and exciting ways, but obviously the werewolves are the most in tune with the moon phases. I noticed my Sim getting famished and wanting to eat almost non-stop the closer it got to the full moon and her turning.

I really enjoyed watching my Sim transition, and it’s cool to see their eyes glow red the closer they get to turning into a werewolf. They did a great job with the actual transition too. The downside to being a werewolf is the fury and destruction. Lily would pee and “mark her territory” literally everywhere. Inside the house, outside the house, right in the middle of a public location. Every werewolf will get different traits they earn as they rank up, and Lily seems to build the fury bar up faster than others. Fury dictates how fast you’ll change back into a werewolf. I started to dread her turn because she would destroy half of the house along with peeing all over the place. 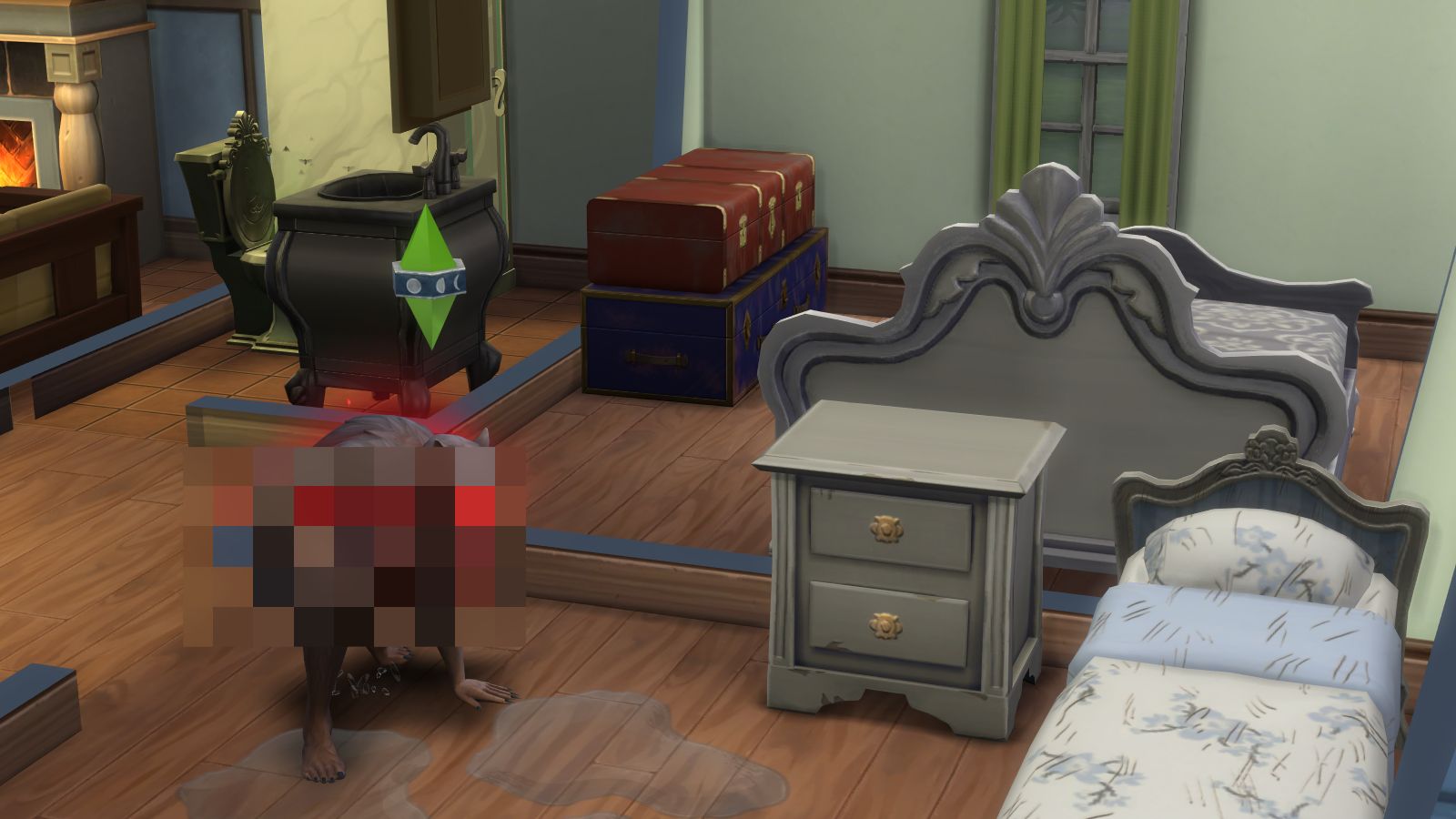 You’ll destroy your house and “mark your territory” a lot while in wolf form. She literally peed three times in a row after trashing the bed.

The other downside to being a werewolf is that most people are freaked out by seeing you in wolf form…justifiably so. Half the town disliked me after my first transition. Howling, snarling, or even just being near other Sims makes negative social moodlets. I decided to work on getting my reputation up with The Moonwood Collective pack as part of my aspiration requirement, but I quickly realized I should have taken up with The Wildfangs. The Moonwood Collective is all about being peaceful and good, while The Wildfangs are more renegade wolves. While I didn’t want to actually seek out being a big bad wolf, it is kind of hard to avoid making people upset while you’re transformed, and because of that it makes relationships much harder.

I finally got the ability to try to transform back into a human at will, which helped a lot. I was having to basically stay away from people while I was a werewolf because The Moonwood Collective has a policy that you have to be a good representative to the community at all times. You run the chance of getting kicked out of your pack if you break any of their rules. 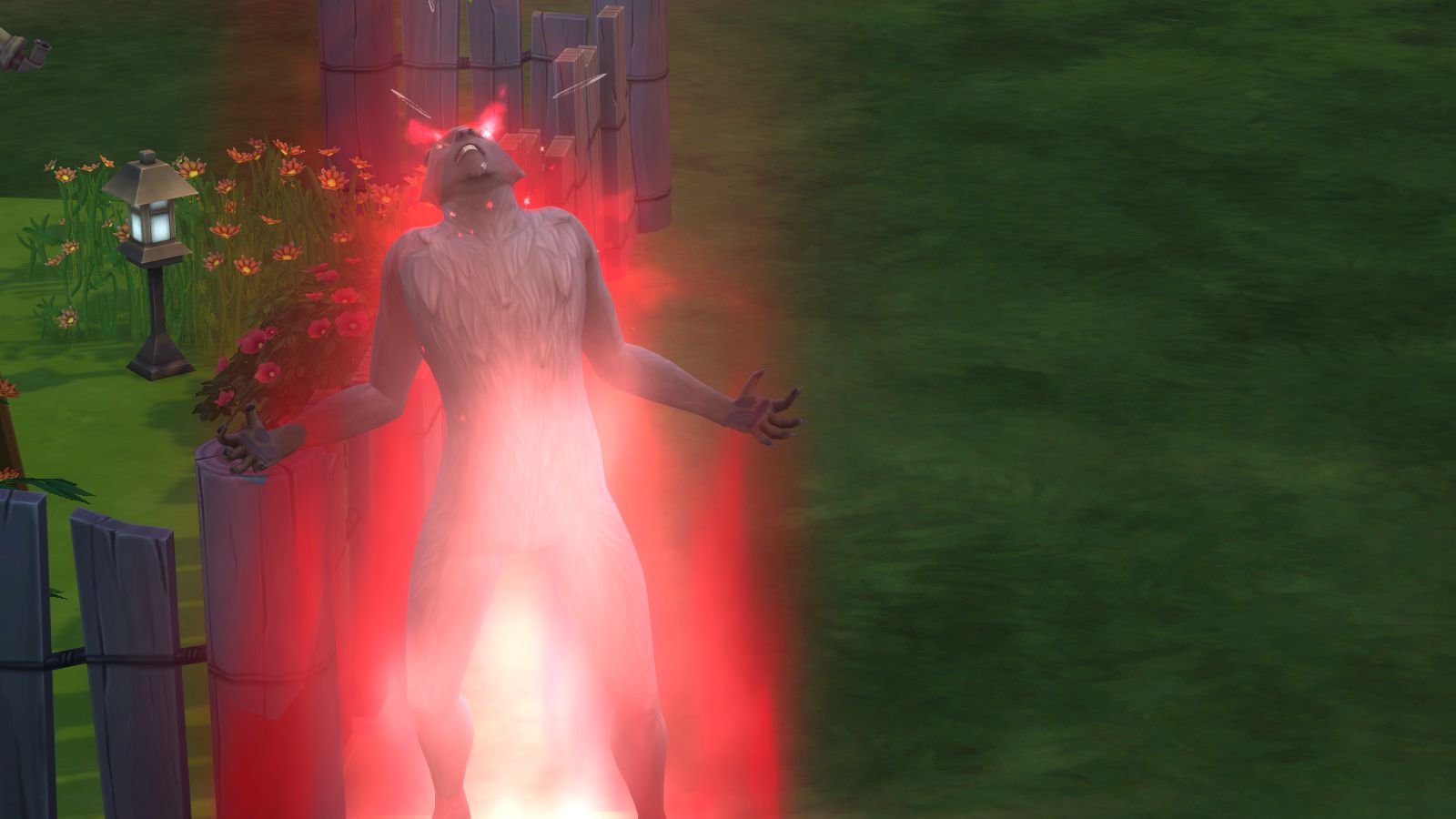 Let the rage consume you!

Once I was officially a werewolf, I started to take advantage of being able to pee outside to avoid the stupid toilet pranks that my Sim kept setting up for herself. There are a few werewolf advantages that make life easier, like the ability to sleep outside anywhere you want, and get bonuses if it’s at night under the moon. Being able to hunt for food and fulfill your hunger needs no matter where you are is handy as well. Unfortunately I think the werewolf lifestyle only fits a certain type of playstyle, it’s not really for everyday life in The Sims.

Much like the spellcaster and vampire Sims, the werewolves come with a skill tree that you earn points for to use towards unlocking more benefits. Some of these help you become more feral, and others try to quell the beast within. There is also a cure that can be found if being a werewolf isn’t for you, though I didn’t explore this avenue yet so I can’t speak on how it works.

I ended up marrying Kristopher Volkov, the alpha of the Moonwood Collective, and doing so made a few things easier for me. I didn’t have to challenge him to become Alpha, he just passed it over to me. He also pacified me when I was in werewolf form which is how I got the ability to turn back into a human at will. His passive traits were very different from mine, he is much more calm and relaxed, where Lily is all about the fury. In hindsight I definitely should have gone with The Wildfangs and let my rage flow. 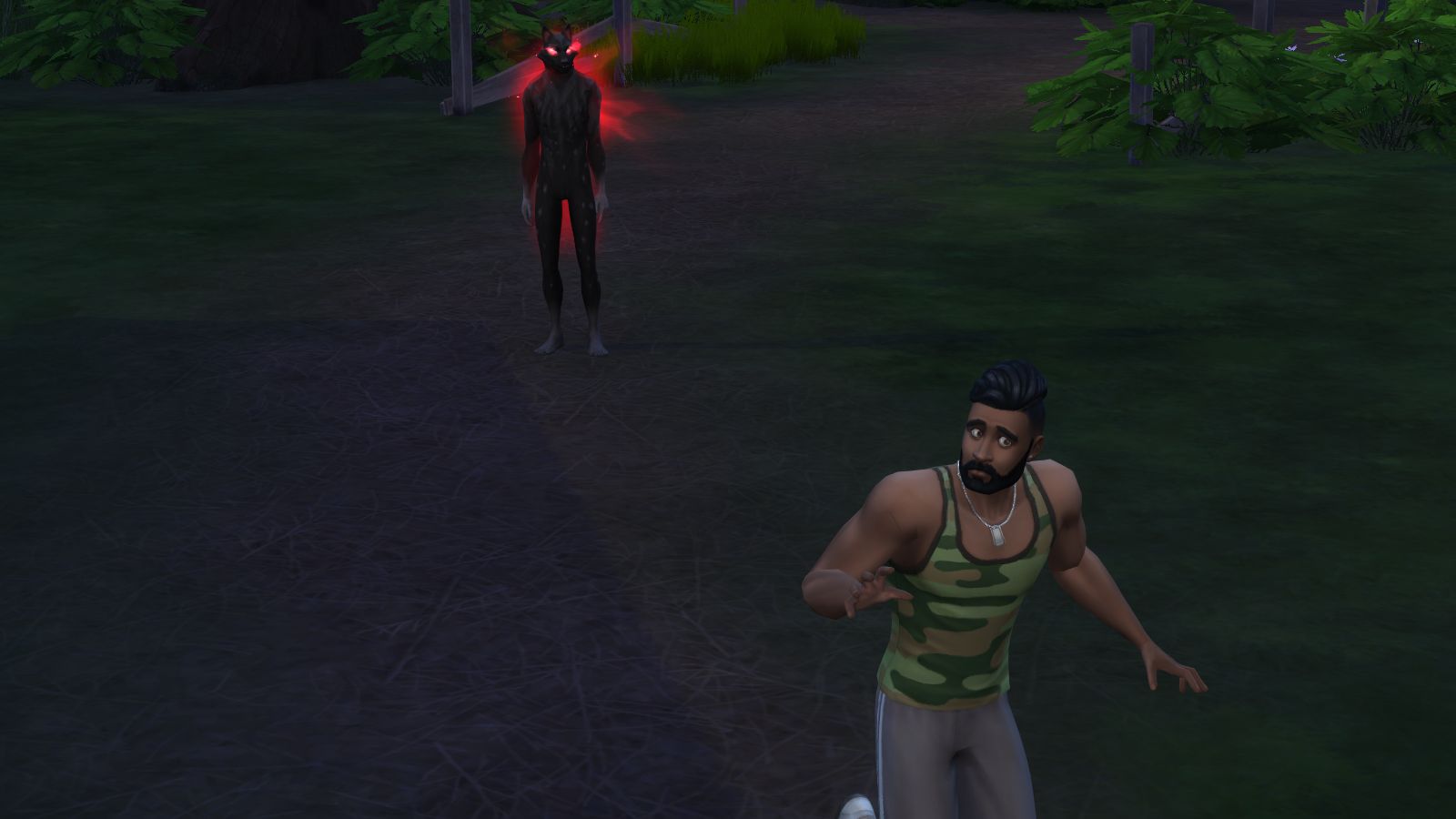 Making friends is hard. This is pretty much the reaction I get when I am around human Sims.

There is a system of underground tunnels that your Sims can “explore”, and sometimes the adventure will open up a new location you can use to move about the map. The exploration is actually just text based choices you make, you don’t actually go IN any tunnels. I also discovered a community residential area that is underneath the local hangout where there are showers, a gym, and a full kitchen. I ended up hanging out in there a few times while I was in werewolf form, better to destroy their property than my own!

One last thing to touch on about the new Moonwood Mill map is that while there are two pack hangouts, I wish you could go inside of them once you’re actually a part of the pack. The Moonwood Collective hangout is a cool looking tree, and you see Sims going in and out of it but you can only interact with it to do things like donating to pack resources. I’d rather have seen the map have an actual werewolf pack base your Sim can hang out in than the random underground bunker that is on the map.

While I did enjoy the Werewolves Game Pack, I can’t see this being my main Sim I’d want to play, though I can say I would love to create a new Sim (minus the goofball trait!) and just go wild and feral to see how that goes. My vampire Sim is actually my second most played Sim, and while being a vampire does have some downsides, I think the lifestyle of a werewolf is much more challenging.

The Sims 4 Werewolves Game Pack is currently selling for $19.99.

The Sims 4 Werewolf Game Pack introduces some exciting new things to the game, such as the ability to draw on your Sims fur and stamp on designs which gives you endless possibilities for customization. The new lunar cycle which directly affects your werewolf, and the werewolf packs along with the hierarchy are all fun. I enjoyed the way your Sims looks the closer they get to transforming. However, some of the social difficulties from being a werewolf, and the fury and destruction of items in your own home made things more difficult. I can’t see myself making my everyday Sim a werewolf, but this pack is definitely fun to play through at least once or twice!

Holly Hudspeth is a best-selling author living in Fort Worth, Texas. She has six published novels to date; The Skyy Huntington Series, which is an epic dark fantasy adventure, and One Small Detail, a stand-alone medieval fantasy. Holly also enjoys writing fan fiction based on her avatars from games such as EverQuest, Elder Scrolls Online, and World of Warcraft. Her first major purchase at the established age of nine was the NES, and she has been gaming ever since. She enjoys fantasy games, city builders, RPGs, MMOs, SMITE, and The Sims franchise. Most nights she is in SMITE with her husband and friends, or playing ESO. When she isn't gaming, she is probably either at Disney or planning her next trip there.
Related Articles: The Sims 4, The Sims 4: Werewolves
Share
Tweet
Share
Submit