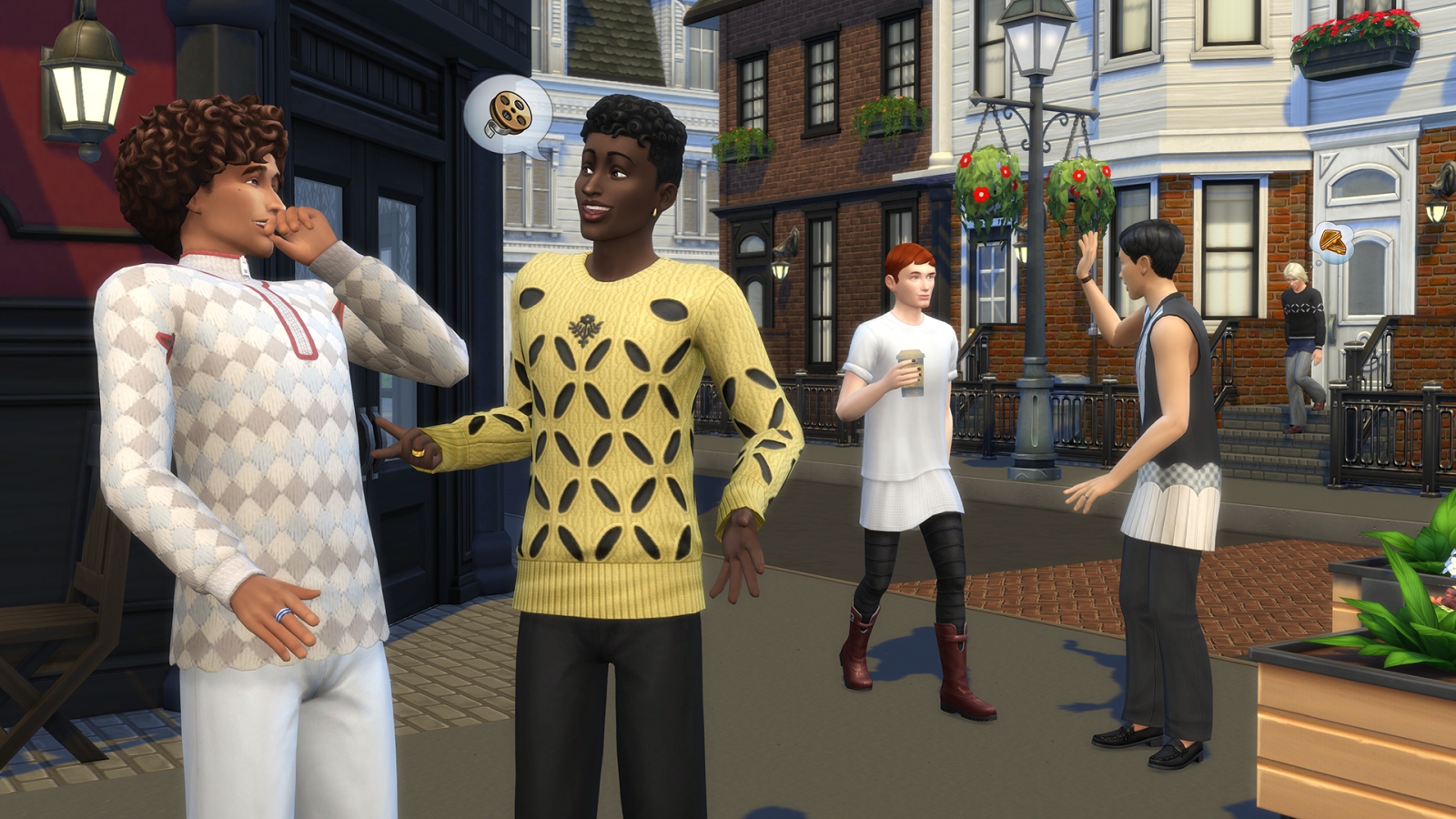 The Sims 4 managed to slip one more Kit in before the end of the year. Modern Menswear launched on December 2nd…and I have to be honest here, this was a complete failure on so many levels. The Sims 4 collaborated with London-based designer Stefan Cooke and his partner Jake Burt, where they added some of their real life designer pieces to The Sims 4, along with other items targeted at male Sims to give them fashionable and reinvigorated basics. As per the launch screen for Modern Menswear, the Kit updates your Sim’s closet with 23 trendy wardrobe staples. Fluid shapes add “intrigue” to any outfit, while zippers, cutouts, and pleats lend everyday outfits a touch of the contemporary. 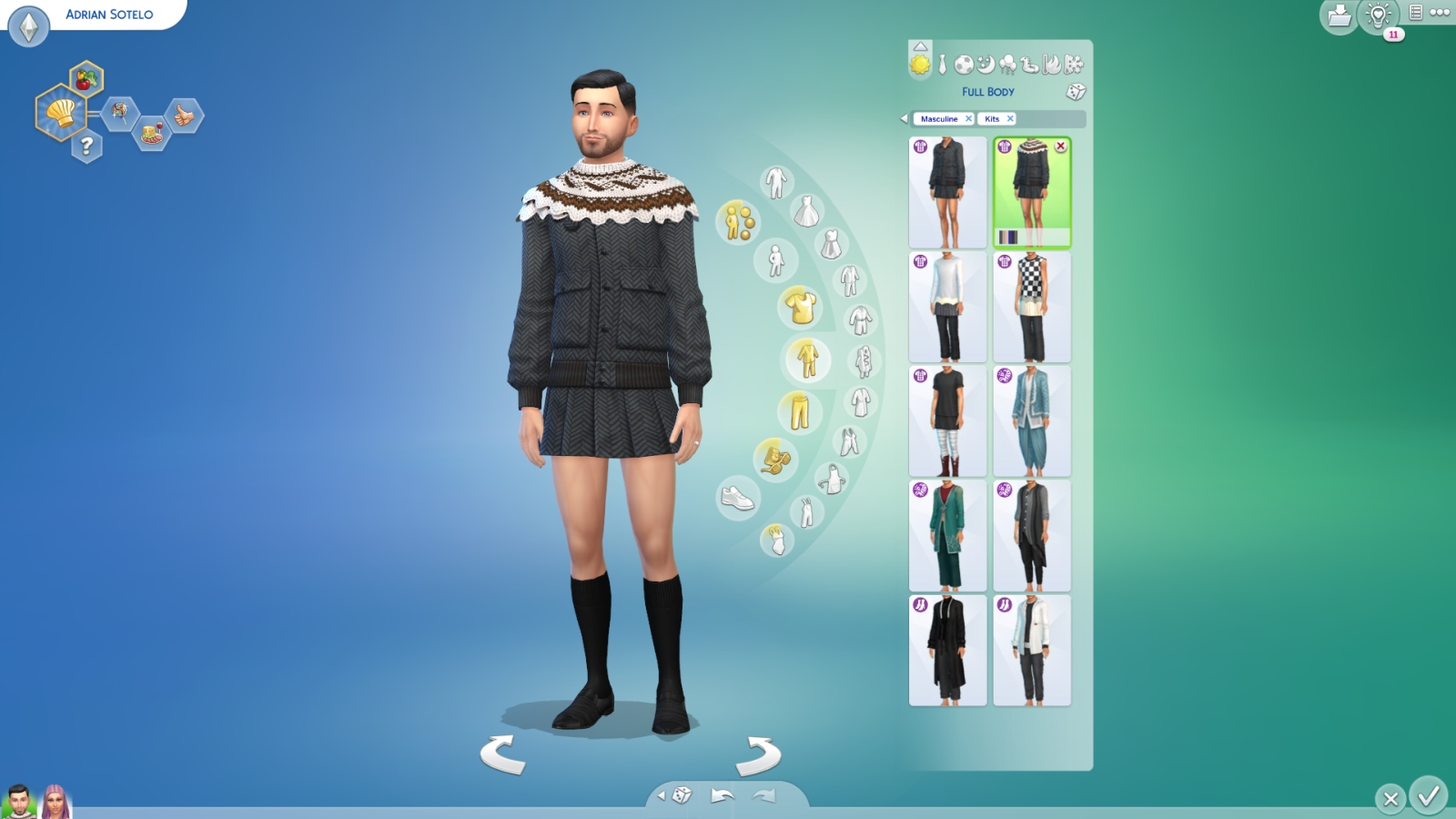 Seriously, who’s wearing this?! The knitted doily with the Clueless skirt gets a zero from me!

I’m sorry to burst their bubble here, but pleats were never trendy or contemporary. Nor are 96% of the pieces in this collection. If frumpy knitted grandpa sweaters and the skirts from the 1995 blockbuster hit Clueless are your thing, then I suppose that this Kit was made for you, but the rest of us would not be caught dead in these pieces.

The handful of clothing items that you can work with are cute, I’ll give them that. I found a biker jacket and what I think are stylized jeans to go with it. The two shoe options offered with the Kit are fine, nothing amazing. There is also a pair of plain pants you could use to mix and match with. I tried some of the more questionable items on my female Sim and I hate to say it, they just aren’t good. There are no “must haves” in The Sims 4 Modern Menswear Kit. 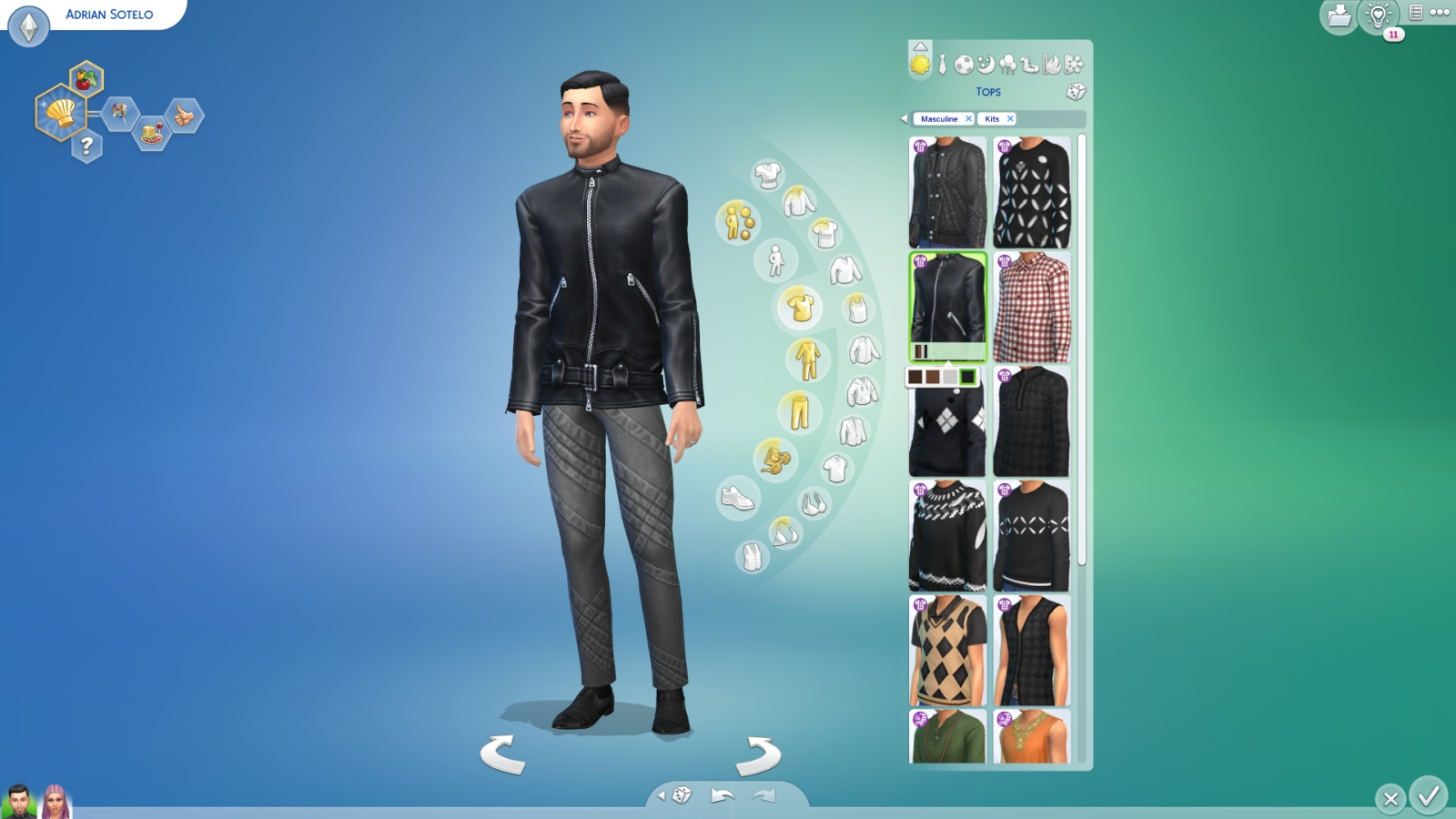 Pretty much the only acceptable outfit I could find out of the whole Kit.

To be fair, the men’s clothing has always left a little to be desired in The Sims 4, and this Kit didn’t add anything worthwhile to the closet. I’ve kind of felt like The Sims 4 has done a bit of pandering this year with some of their Kits. We all know and love that they are LGBTQ allies, but the constant need to throw mediocre material at us under the guise of supporting the community comes off as a cheap money grab tactic. I genuinely liked all of the Packs and Expansions that were released this year, and in fact even gave one or two of them a 100 score, but some of the Kits have been pretty lame, and they could have just given us with a free update (lookin’ at you, Bloomin Rooms Kit!) 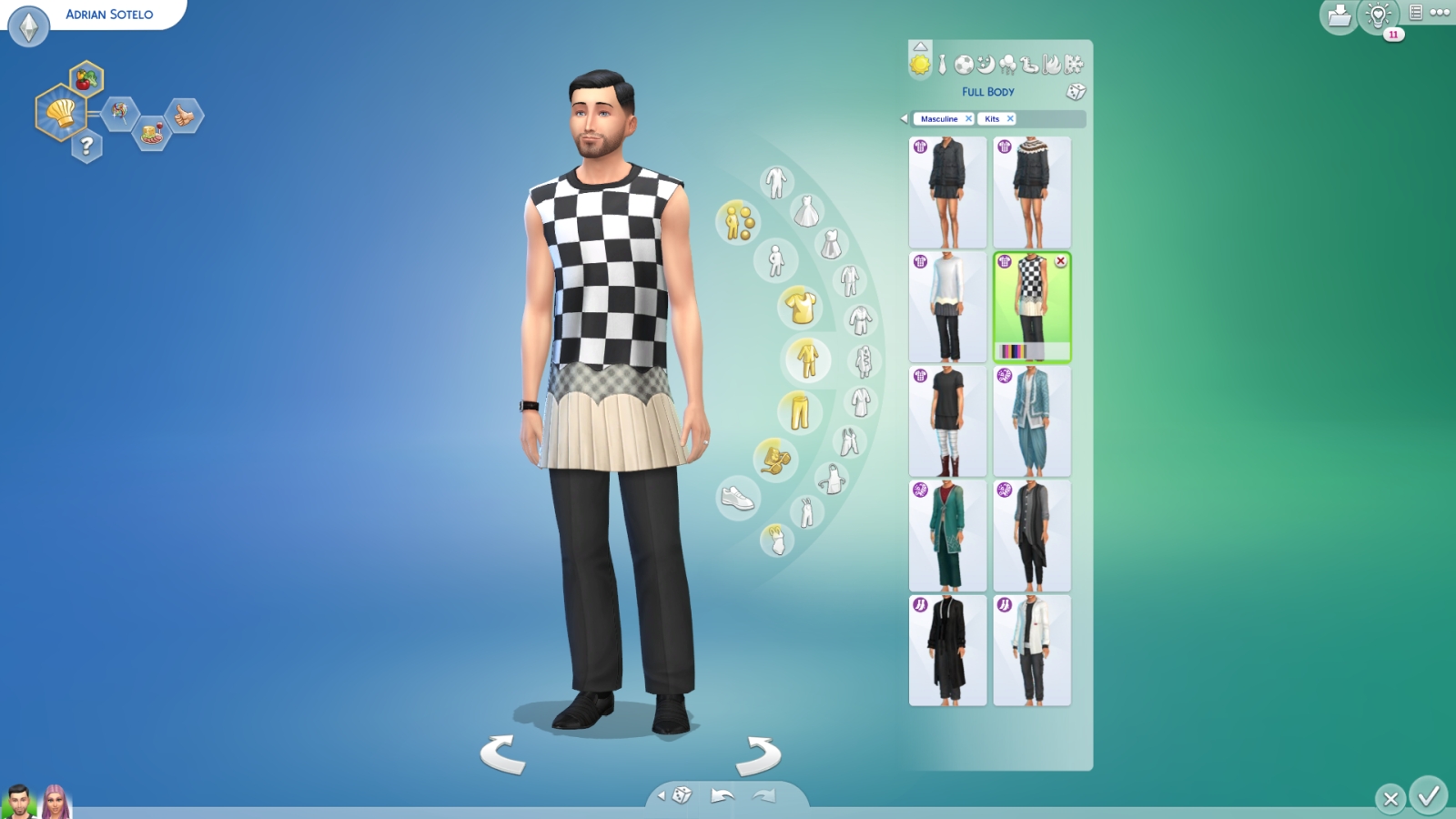 One of the full body pre-styled outfits that came with Modern Menswear. This is a man who is ready to conquer the world! /sarcasm

The beauty of The Sims 4…and all of the Sims games in the franchise… is and always has been to leave reality at home and be ANYONE you want to be in the game. Want to be an alien…cool, do your thing. Mermaid? Get your splash on! So why target this Modern Menswear Kit towards men? Just launch the Kit and let whoever wants to wear the stuff wear it. The bottom line is, the Kit was mostly terrible, and nobody wants this content. We Sims players have been asking for a lot of things, and I am sure that the devs are aware of it, but this was not one of them. I appreciate the idea of Kits a lot, the Courtyard Oasis Kit was fantastic, and I like that they are cheap and affordable (usually priced at $4.99 USD), but give us content we can actually work with.

Maybe I am just totally out of touch with what “stylish and trendy” men are wearing these days. I respect the designer and his work – if there is a market for it in the fashion industry, that’s fantastic for him! But honestly, nobody I know in the real world would really wear this stuff, and I sure as heck don’t want to put it on my Sim in my fantasy world of The Sims 4. 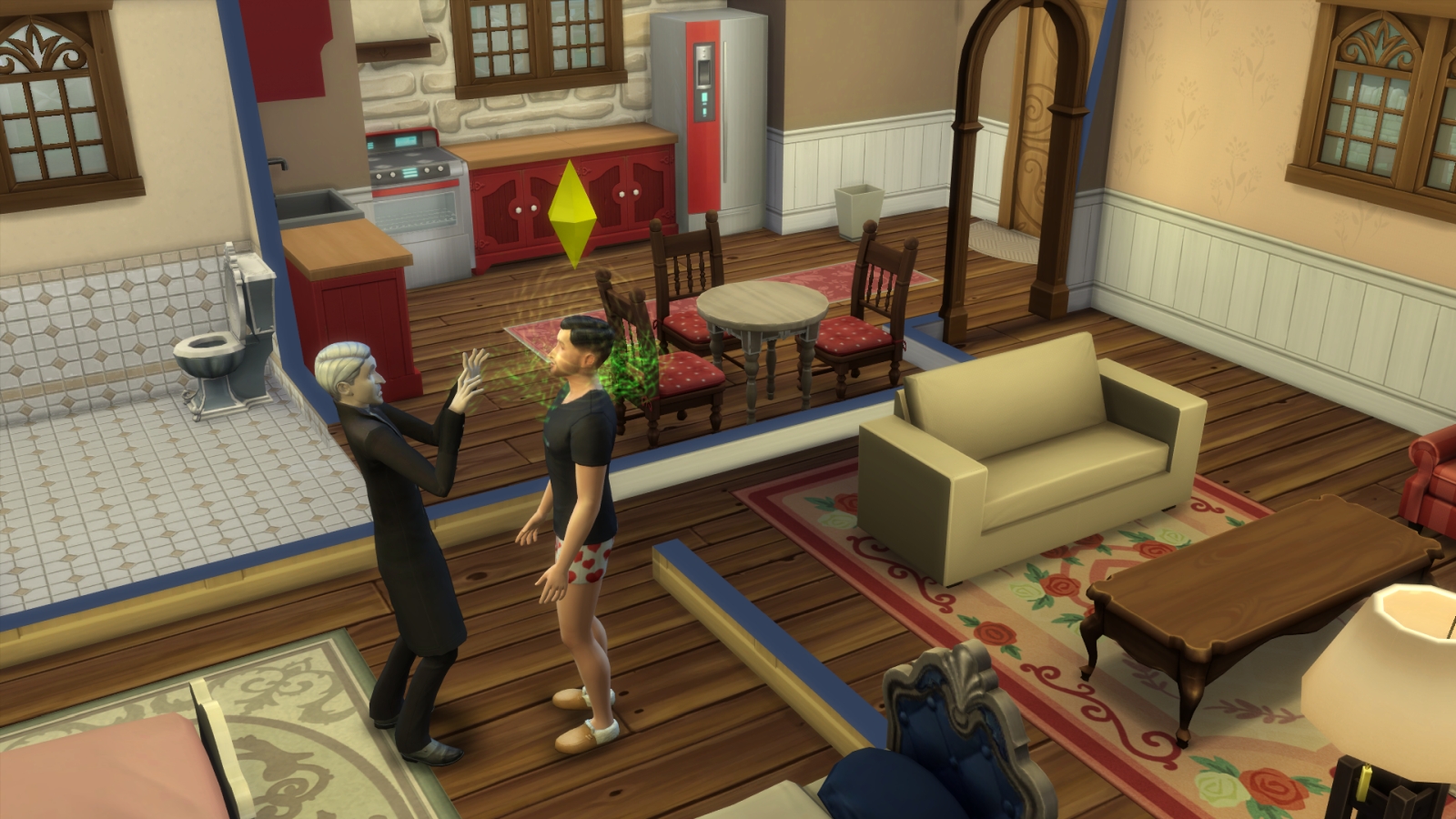 After changing my poor Sim back into his regular clothes, the coolest part of playing with The Sims 4 Modern Menswear was my first ever random vampire encounter.

The beauty in life is that everyone has their own opinions and are free to like what they like. I am sure some folks loved The Sims 4 Modern Menswear Kit, and if they did, good for them. This totally was not my cup of tea, not only because the pieces were not at all trendy or attractive, but it also felt like pandering. The coolest thing that happened to me while trying out this Kit was when my Sim got attacked by a vampire for the first time ever. I would not suggest paying $4.99 for this Kit, save your money for some of their better Kits.

The Sims 4 Modern Menswear Kit fails on multiple levels. The pieces are targeted at male Sims to give them a trendy and updated look, but they fall short of that. Frumpy sweaters, pleated mini skirts, and silly looking pants bring nothing to the table. Out of the 23 total pieces in the Kit, I really only sort of liked 3 of them. Save your money, and pass on this Kit.

Holly Hudspeth is a best-selling author living in Fort Worth, Texas. She has six published novels to date; The Skyy Huntington Series, which is an epic dark fantasy adventure, and One Small Detail, a stand-alone medieval fantasy. Holly also enjoys writing fan fiction based on her avatars from games such as EverQuest, Elder Scrolls Online, and World of Warcraft. Her first major purchase at the established age of nine was the NES, and she has been gaming ever since. She enjoys fantasy games, city builders, RPGs, MMOs, SMITE, and The Sims franchise. Most nights she is in SMITE with her husband and friends, or playing ESO. When she isn't gaming, she is probably either at Disney or planning her next trip there.
Related Articles: The Sims 4 Modern Menswear Kit
Share
Tweet
Share
Submit