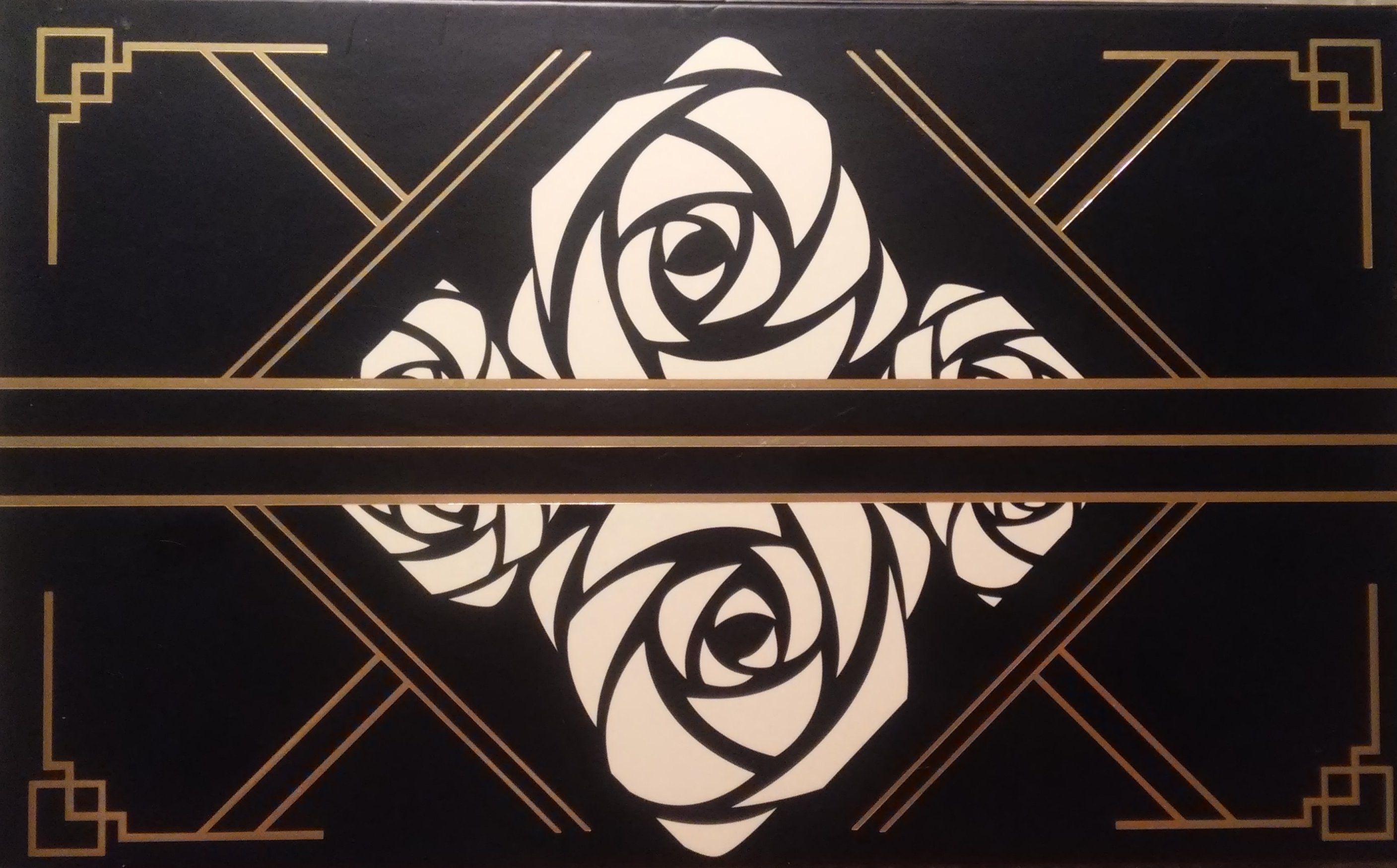 An empire in crisis, the noble houses are preparing to bring all of their daemonic power to bear in the power struggle that is to come. For now, they must be content to strike from the shadows, using catspaws to undermine one another and bide their time for the conflict that is to come. Demon Trilogy: Subrosa is the first in a line of three games that will tell the story of Alpreich, an empire whose power is predicated on the binding and manipulation of daemons, powerful entities that wish the worst for mankind. Each noble house owns its authority and security to a daemon, and part of the work of managing a household is keeping the daemon restrained.

The young Empress Nova has recently taken the throne after the death (and possible assassination) of her father, only to behold a horrific truth: Moloch, the Immortal Flame– the daemon whose might is the seat of the empire– may soon break free. When it does, she will die and Alpreich will fall prey to whoever can take it. The great houses can smell this weakness, but it is too soon to move directly. They have to resort to mercenaries, the Subrosa, who are bound to serve their masters through contracts sealed in Daemon blood. In the game, you will play as the head of a great house, attempting to complete these Contracts for power and, well, victory points.

I am enamored with this setting. It puts a few simple twists on familiar concepts and introduces a world I am eager to explore and understand. As a game concept, it sets the stage for anything from area control to social deduction or even auctioning. There is little word yet on what the future games in this series will look like, but the first is at its core a drafting/hand management game, and includes very light direct interaction with your fellow players. This distance is appropriate to the setting, which places you early enough in a conflict that you are not ready to engage in open hostilities. Usually I find games without extensive player interaction to be sterile, but the dedication to this theme of manipulation and subterfuge is what sets IDW’s game out.

Deamon Trilogy: Subrosa (which I will refer to as DTS for brevity) is made up of two decks of cards: the Subrosa and the Contracts. The Subrosa are divided into five types: Alchemists, Courtiers, Knights, Pilots, and Spies. Spies tend to reveal hidden cards, Knights damage enemy characters, Pilots move cards around between hands and players, Alchemists are effectively medics (appropriate in a magitech fueled society) and Courtiers steal Contracts. There are 75 character cards, but there are 3 copies of each character and 5 characters per type. The Contracts, meanwhile, require a varying number of each Character type before you can complete them, and grant more victory points the more characters they require.

There is a great deal of flavor in these characters and contracts, and the accompanying art and text do a lot to quietly worldbuild. You will find yourself employing a necromancer, a slanderer, and a crazed void traveller to either kill or protect a foppish lord, or capture a sentient, armored, magical animal. The art will strike many as generic, and frankly it is, even if the subject matter discussed is interesting. It also leads to a lot of confusion, throwing 20s gangsters, Victorian garb and Japanese architecture and weaponry into the mix. It’s very hard to tell how much of this anachronism is purposeful and how much is an afterthought, but from the information we have so far it feels jarring, and leaves me confused as to the nature of Alpreich. The cards themselves are of adequate quality, but you will need to sleeve them if you want them to survive even a few playthroughs unmarred.

See, each of these are interesting, but there is a strange mix of art styles at play and it isn’t clear why

Managing your resources is key to DTS, but also tracking those of your opponents. Whoever has the most Contract points at the end of the game is the victor, but you will subtract the value of unsuccessful Contracts from your successful ones, making it crucial for you to know your limits.

The size of the character deck varies by player count, and the rulebook gives you a suggested list of which characters you should include at each player count. I didn’t play around with these loadouts too much, but they seemed sensible, given how some powers become significantly more useful at higher player counts.

You begin the game by shuffling the Character and Contract decks; you then deal 15 Character cards to each player and 3 Contracts. Each player is free to discard up to two Contracts, and play begins with dealer.

The game consists of rounds, each with five phases: Recruitment, Action, Resolution, Scoring, and Passing. All players act simultaneously, except during the Action Phase. In the Recruitment phase, you play two cards facedown from your hand in front of you, forming your Crew, which you will use to complete contracts. In the Action phase, you either use the ability on a face up character, flip a facedown character face up to use its ability, draw 2 contracts and discard one from those available to you, or complete a Contract and discard the Characters you used to qualify for it. During Resolution, you resolve abilities in turn order. In the case that a Character is wounded, it can still act, which sounds unusual but acts as an important mechanism to make sure players are paying attention. You have to eliminate potentially hostile Characters before they strike, rather than giving them the chance to ruin your well laid plans.Finally, in the Passing phase you give your hand to the player next to you, and begin the next round.

When someone has only 1 card in hand at the end of the round, the game is over. Each player subtracts the point value for unsuccessful contracts from their successful ones, and whoever has the highest point total has won.

The actual gameplay is simple and fluid, but in many ways feels typical to the average drafting game. The same simple mechanisms are all here, forcing you to slowly build up your hand to qualify for point cards. The Contracts don’t do anything in-game, their only effect is to remove Characters whose abilities you might use. It leads to an interesting interplay, by which you want to save powerful Characters, which will also put them at risk, but using them to complete Contracts will force you to get rid of them entirely. What does set this game apart is the character abilities and hidden objectives, which do the best work of selling the intrigue of Alpreich.

As you make your way towards completing your Contracts, you will work to defend yourself and stymie opponents through the variable Character abilities. The abilities are powerful, and to succeed you will have to build a strong Crew from multiple different Character types. Defense is almost important as offense. Additionally, the amount of information that is hidden from you at any given time makes spies of crucial importance. Both Characters and Contracts are often facedown, and if you want to succeed you will need to know as much about your opponent’s goals as you do your own. All of this taken together amounts to a delicate dance of play and counterplay that will put you right on the ladder of chaos, climbing or falling as you play.

All of this is a lot to take in on your first time through the game, so it is best if you are prepared to give it a few playthroughs before you really engage with it. Thankfully, each game speeds by unless someone is agonizing about their options. Given that most phases take place simultaneously and abilities have simple triggers, there isn’t much to paralyze players beyond the deeper strategies at play.

You would think this complexity would make higher player counts a bad choice, but for once the opposite is the case. While it may be more chaotic, the true essence of DTS happens when there are several factions slowly gaining power, having to check one another and track their goals. In my experience there wasn’t a serious threat of anyone ganging up on anyone else, given both the drafting aspects and the fact that it didn’t benefit anyone to take a player out. The clock goes down at a fairly consistent rate, and players often choose when and how they score. Other players can only truly hurt you if they make it a sustained goal, and only at the cost of their own Contracts.

DTS does come with a free app, developed by the team at Harebrained Schemes, who ironically created the Shadowrun Returns series, another setting involving powerful entities using magical mercenaries to engage in espionage against one another. The App manages your cards and their abilities, helping you to keep things hidden on an electronic device. You can use it on a single phone or tablet or multiple as you so choose. Its main value is that it also makes your actions hidden, reinforcing that feeling of intrigue and deceit that lies at the heart of Alpreich. Its inclusion is a creative way to change the psychology of the game, if not one that everyone will want to engage with. Its makes the strategy more difficult, because of all the subtext that it generates, as you don’t always know where an attack has come from or the best way to respond. I found its fun varied depending on the group I was playing with; some people found it a stumbling block to keeping track of the game, but others thought it was a helpful tool to let them get the most out of the social maneuvering aspects of DTS.

The rulebook, which is otherwise fine, includes three variant rulesets that I recommend ignoring. The first suggests playing the game three times and totalling your scores for all three games to determine the victor. There isn’t anything to differentiate these playthroughs other than establishing leaders (thus putting a target on their back) so there is little reason to play this way. The second variant is too uneven to be reliable, as it asks you to create the Character deck randomly, without regard to type or full sets. This takes extra time to set up and fix afterwards, and moreover doesn’t give you enough understanding of what is going on in game to be able to play effectively.

The final variant tells you to add extra cards from a separate set of the game if you want to play with more than 5 players, but this requires owning a second set of the game. I haven’t played at this level, but it does seem likely that the game would break down at that point.

Daemon Trilogy: Subrosa invites you into a world of treacherous magic and more treacherous nobles. As you draft cards and utilize abilities, you will find yourself increasingly feeling like a scheming noble, positioning your resources carefully to evaluate and undermine your opponents, all while keeping your hands clean.

John Farrell is a legal aid attorney specializing in domestic violence, living in West Chester Pennsylvania. You can listen to him travel the weird west as Carrie A. Nation in the Joker's Wild podcast at: https://jokerswildpodcast.weebly.com/
Related Articles: Daemon Trilogy: Subrosa, Tabletop
Share
Tweet
Share
Submit