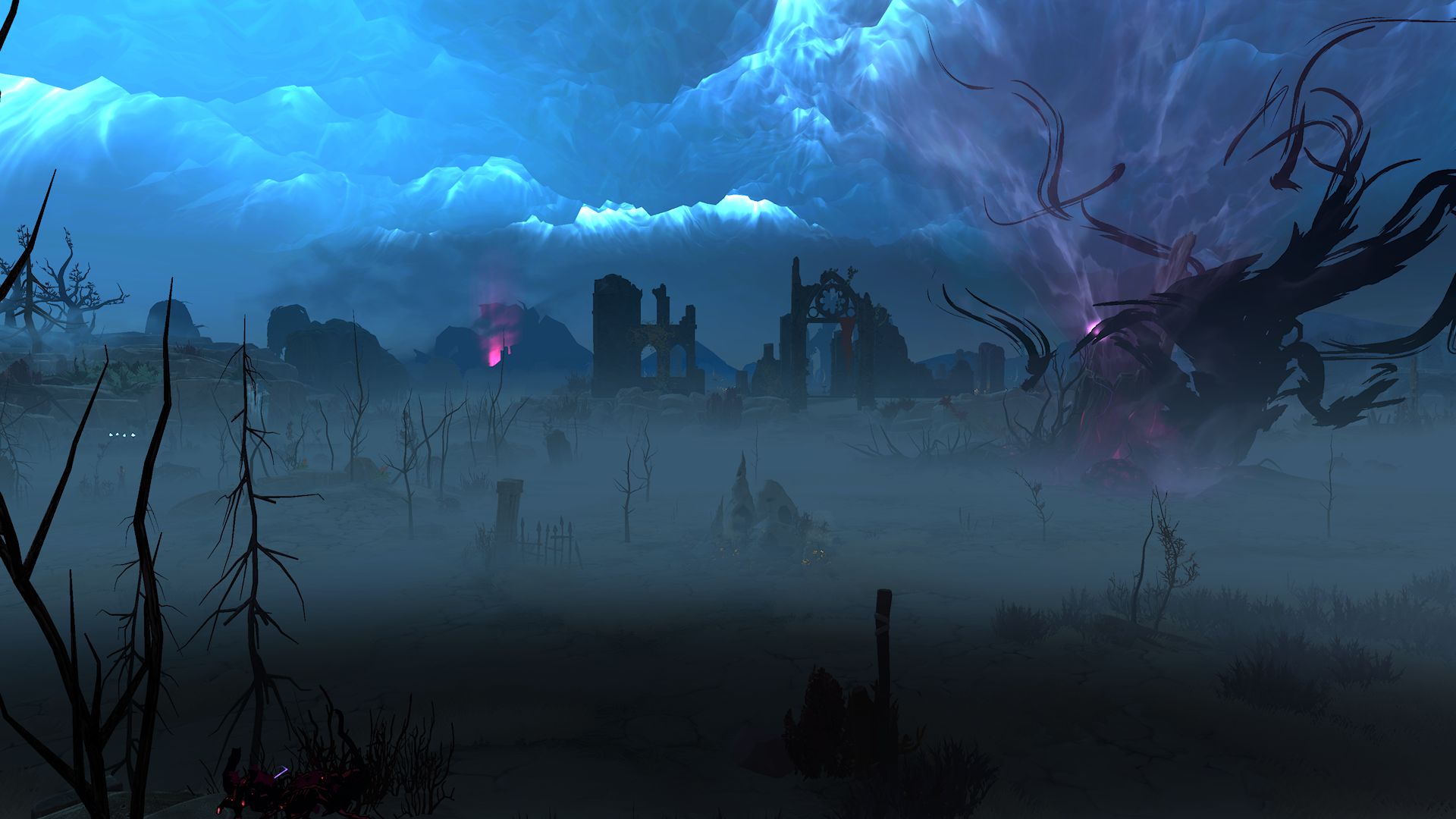 The Wardens serve only a singular purpose in this world before they ‘pass on’ to whatever’s next for them. Is it an afterlife? Do they get such an honor? Who knows? To those who encounter them, they simply exist… until they don’t. In The Serpent Rogue you play as one of these Wardens, trying to rid the world of a corruption that spreads like a blight throughout the land, turning once innocent souls into hollow husks of what they once were and destroying everything else it touches. In this wondrous alchemic adventure, you’ll have to use your wit and problem solving skills to push back the corruption before it can consume everything.

The Serpent Rogue is a wonderfully crafted alchemic adventure game with some rogue-like elements thrown in, keeping it interesting. Right away you’ll need to start gathering various resources (referred to as ingredients, which we’ll touch on again soon) for crafting and begin exploring your surroundings. The game doesn’t give you much direction outside of telling you that you need to go to the Wasteland and then eventually figure out how to un-corrupt a tree that’s blocking your path. Outside of giving that basic instruction, it is entirely up to you to figure out how to get it done. It’s about as instructive as Minecraft. A lot of the early gametime will be spent running around, experimenting with trial-and-error, and simply learning what everything does. Overall, gameplay can be very slow-going for a little while until you suddenly have bursts of successes and “ah-ha” moments that thrust you forward towards your objective.

The map is divided into many different sections, each serving a specific purpose. There are areas for open exploration and resource gathering as well as multiple safe zones where risks are generally low, at least as long as you don’t just start attacking random NPCs in the area. The two biggest map areas, Wasteland and Swamp, are the main focus areas where you will do a bulk of your exploration, gathering resources, solving puzzles and other problems, and progressing the actual game. However, these areas are often overcome by the corruption that spreads from a mountain far off in the distance. When this corruption starts to move into the area, you have to flee to another part of the map, otherwise you will be consumed alongside everything else the corruption touches. Every time the corruption passes through an area it changes it. The overall size and shape of the area will remain the same, however the locations of resources, items, and some map features are rearranged, making each venture into the Wasteland or the Swamp an entirely new experience. 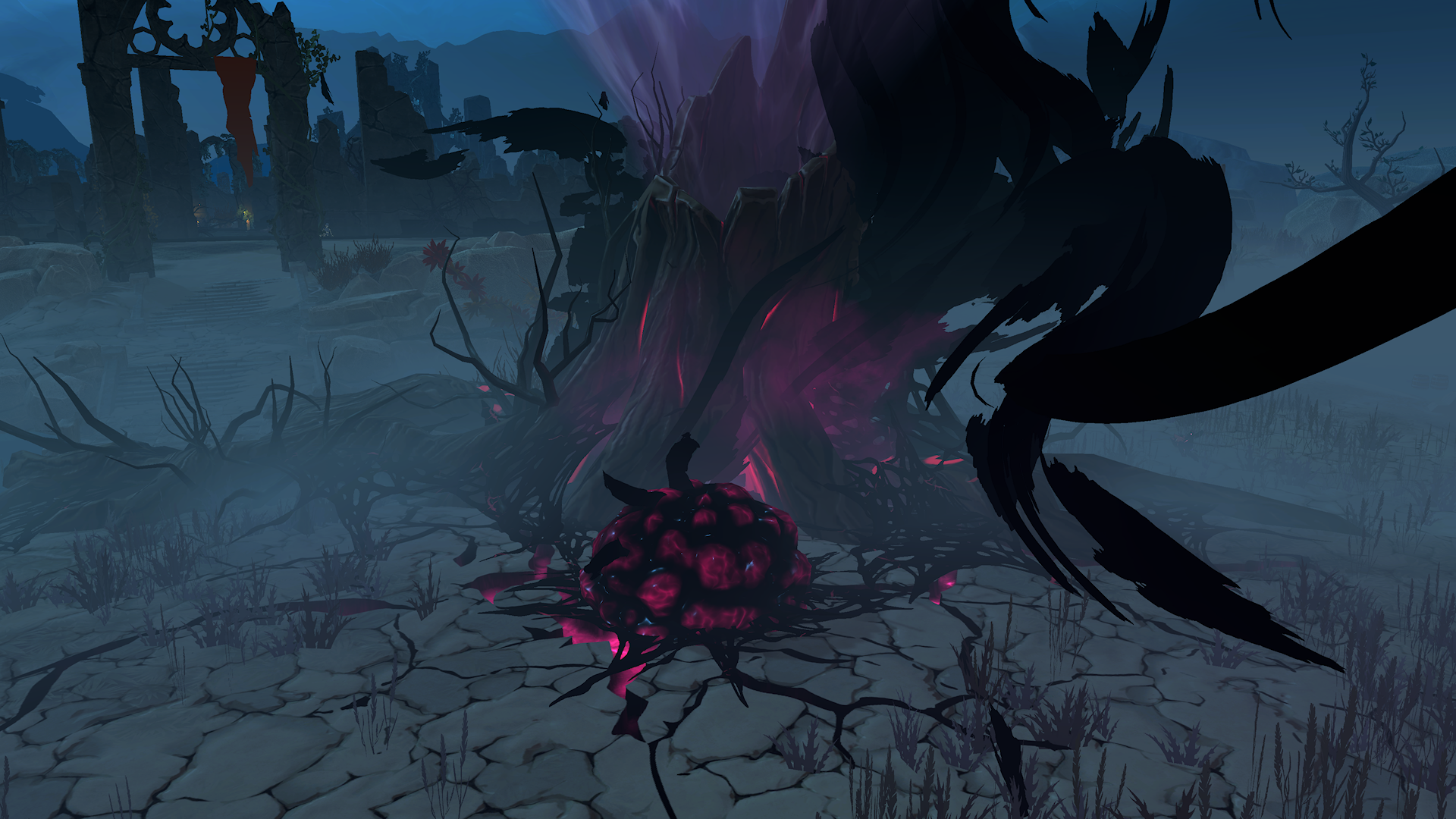 Thankfully not all areas are affected by the corruption. You can jump between the Wasteland and the Swamp when either becomes corrupted or you can head to any of the various safe areas, such as the Camp or the Pier. In any of these safe areas, it’s usually a good idea to take stock of your potions and check on your gear to see if you need any replacements, recruit allies to assist you during your exploration, or do some research on new ingredients you’ve collected.

Brewing potions and crafting tools and weapons will be essential. Virtually anything you pick up can be used in some way to aid you along the way, whether it be metal scraps, textiles, and logs to build your portable lab, or aloe with berries and fishbone to make a healing potion. Crafting is simple enough, as you just combine certain materials together, toss in some charcoal, and you’re off. Brewing on the other hand has a little more to it.You’ll brew potions in either of three categories — to add, to remove, or to change. That sounds a little confusing, I know, so let me explain a little more. Potions in the ‘add’ category seek to… add something in some way, for example, a healing potion to regain health, but they can also be used to create little companions, like a chicken or a rat or a ghoul. In the ‘remove’ category, no surprises, you are trying to remove something. Examples here would be creating damage potions to remove an enemy’s health or creating a potion to remove some sort of ailment. And lastly, there are potions for ‘change’, which could allow the player to change into another creature, such as a rat or a ghoul, to change the state of one’s being (kind of like being undead versus not), or even changing genders. 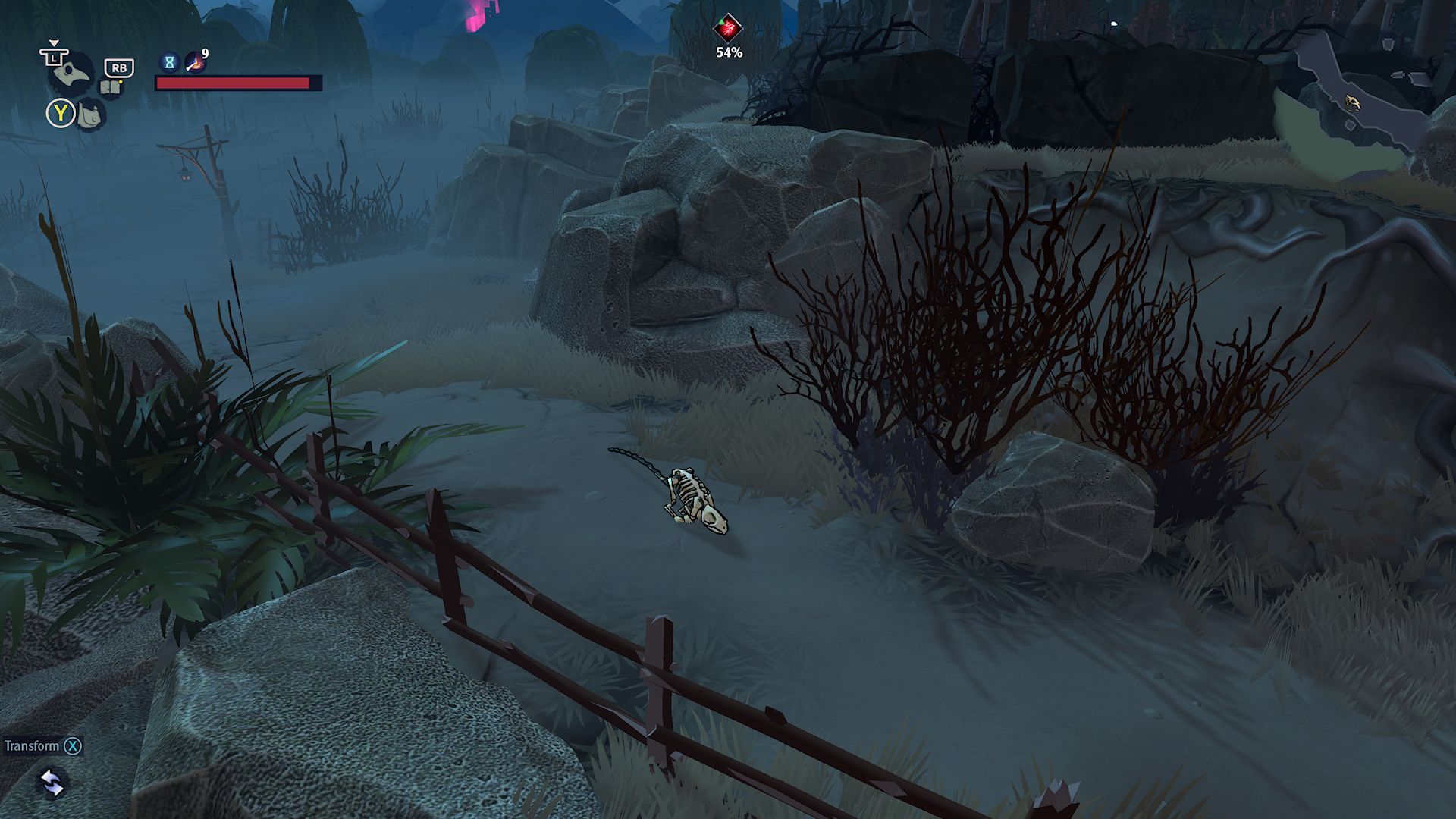 But the complexities of potion brewing don’t stop there. After you’ve determined the type of potion you would like to make, you then have to grab the rest of the ingredients to make it happen, which are broken down into further categories. For ‘add’ and ‘remove’ potions, you’ll also need ingredients pertaining to things like vitality (the term used for ‘health’ in this game), age, or any status effect (such as burning, poison, etc.) as well as a modifier that determines a potion’s strength. If you’re wanting to ‘change’, you’ll need a specific ingredient pertaining to the desired change, such as rat hair if you want to change into a rat. A potion that I found to be particularly useful was a potion of Restlessness (change + restless), which transformed the Warden into a skeleton version of itself, the benefits of which were beyond valuable. However, I don’t want to get into too much more detail about this area as I really want you to explore and make these discoveries for yourself, as they are very satisfying to make. It’ll be a lot of trial-and-error at first, but making sure to research ingredients will result in fewer failures. Failure does result in a loss of the ingredient, so it’s important to get it right.

Whenever you craft or brew something it gets saved as a recipe for later reference, which came in super handy as I continued playing. Weapons and tools have a usage limit and will eventually break so you’ll need to keep a good supply of materials for replacements, and you’ll obviously need to keep brewing potions down the line. But on top of that you drop everything you are carrying when you die. Thankfully you do have the opportunity to reclaim your belongings where you dropped them, however if you’re unlucky enough to die again before you’re able to, everything is lost and you’ll have to brew and craft all over again. There is also a limit as to how much you can carry, you’ll become encumbered and move very slowly if you carry too much, but thankfully there are chests in all the different safe areas that kind of act like an Ender Chest in Minecraft, the contents are accessible at any of these special Warden chests.

Unfortunately for me, death was something I became very familiar with in this game, sometimes repeatedly in a brief period, which left me feeling completely defeated as I’d have to restart from scratch to gather resources to brew more potions and craft more gear. It became really tedious very quickly as sometimes I would die again and again in the middle of trying to recover, setting me back over and over and over again. I’m not going to lie, I did close out of the game a few times in a small fit of rage when these unlucky streaks would occur because I got very frustrated. There were also plenty of times where I just felt stuck, entirely unsure of where to go next or how to complete an objective. There was only so much exploring, trial-and-error, and researching my brain could apparently handle, and in these moments I got kind of bored, aimlessly wandering around until something would finally click into place and I could move forward again. The Serpent Rogue is very unforgiving, it forces you to really dig deep, never giving you an easy solution. Sometimes I just had to pause and sit back to just think about everything I’d learned so far. A lot of the time the answer was right in front of me, I just needed to keep pushing through to find it, which resulted in some of the greatest satisfaction in the end. 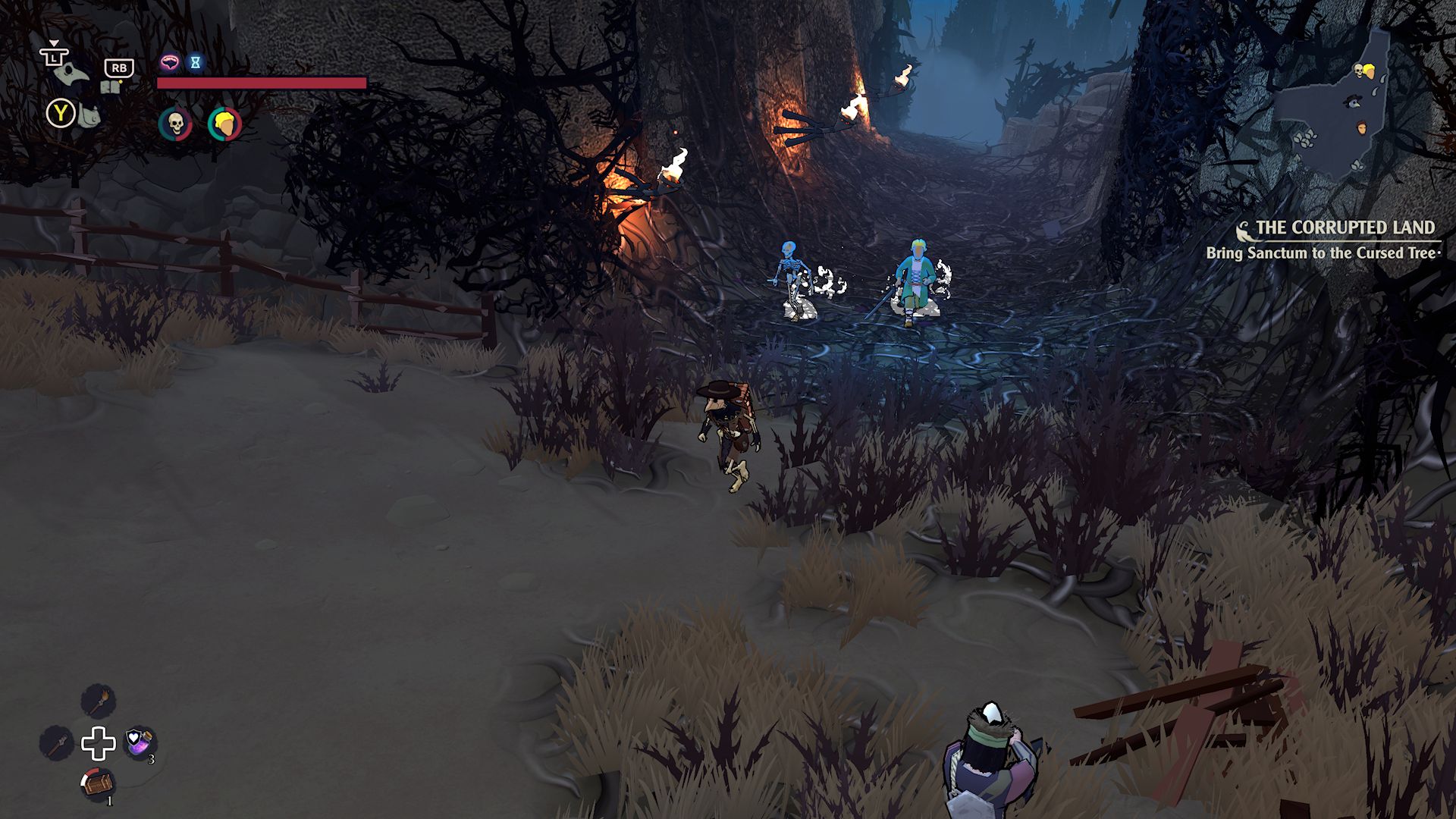 Something I don’t often remark on for games is the soundtrack, but I’m going to for The Serpent Rogue. I loved how each area had a different track, some darker and menacing, others more lighthearted and serene. Most of the safe areas had music that served well to not be distracting, especially when trying to work through the brewing process or recover losses. Other areas, even some of the safe areas, had musical tones that kind of set me on edge a little, reminding me of the futility of some of my efforts and the fragility of my situation. Something that I’ve always enjoyed about my most loved games is how the music legitimately affects my gameplay. I’ve never understood how people could mute the music in a game as I just feel like it takes away from the experience. Obviously music isn’t ideal for all situations, like in games that require a lot of focus and situational awareness, but games like Minecraft and The Serpent Rogue I feel really benefit from having it. It’s just awkward to play some games in complete silence with no background noise.

Also, as a very random side note, I’d be very interested in seeing how this could possibly be translated into a tabletop game…

The Serpent Rogue is a beautifully crafted alchemic adventure with a gameplay system that I am constantly drawn to. It’s simple while still being very thought provoking and so much fun. The game can feel a little drawn out and dry between discoveries (and deaths) however the satisfaction of solving a problem becomes euphoric.

Known online as MzPanik, Cassie Peterson is an editor and part-time content creator, mainly in the FPS and action/adventure genres. She didn't really start playing video games until after graduating high school in 2010, but quickly fell in love, and the rest is history! In her free time, Cassie also enjoys reading and spending time with her kitties, Zoey and Molly. Recently she has also been trying her hand at web development.
Related Articles: The Serpent Rogue
Share
Tweet
Share
Submit