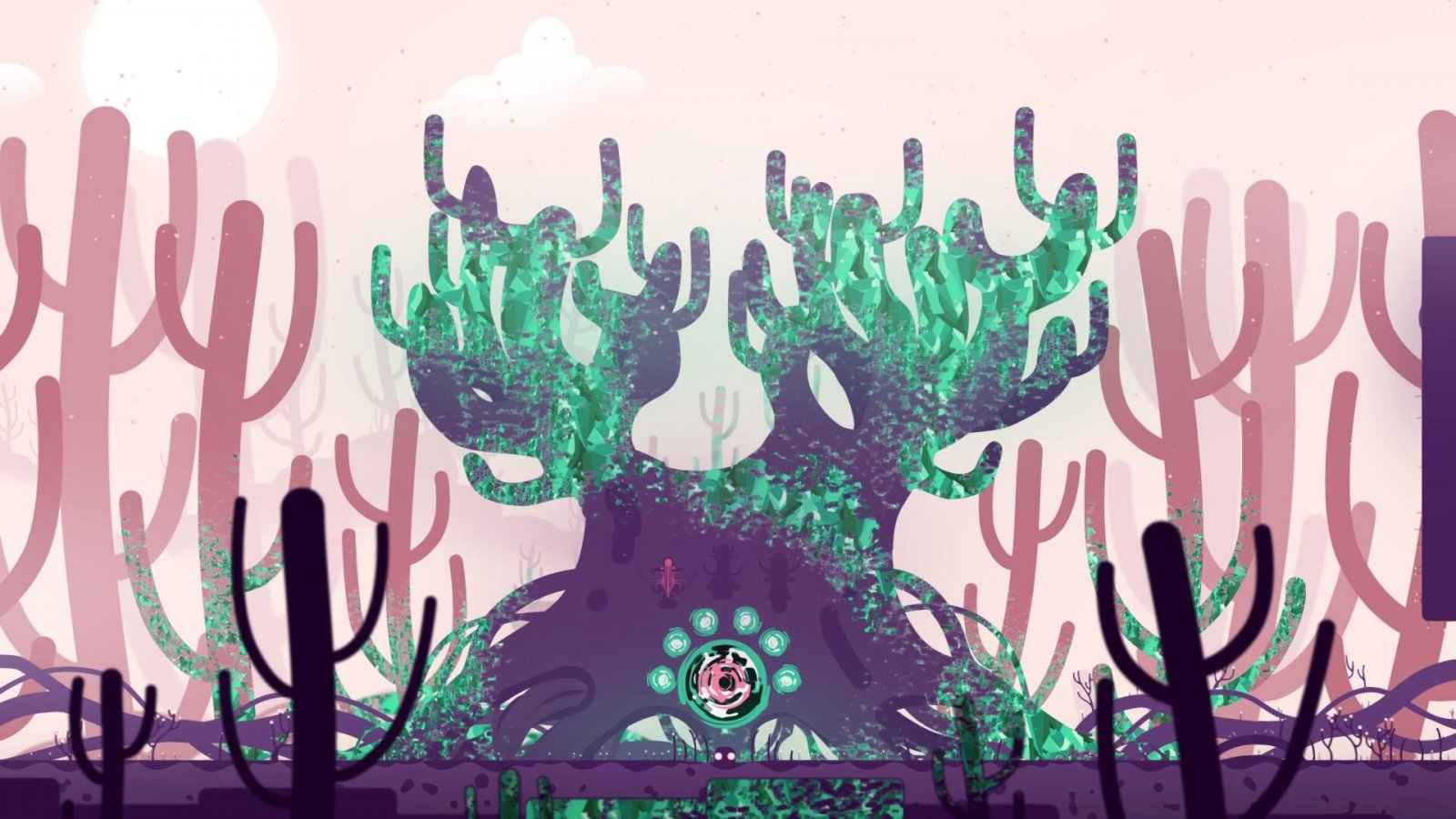 Sometimes a game will introduce a fun hook or twist on existing concepts that can carry that experience a long way. Bionic Commando removed the jump and relied on the swinging mechanic, and Mario games have endlessly messed around with the way Mario interacts with the environment with Sunshine’s F.L.U.D.D. or Galaxy’s low gravity areas. Semblance is a platformer built around deforming the environment to create new paths and platforms, but despite generally delivering on that promise, it does little to expand on it in any meaningful ways.

You play as Squish, a small black blob who is trying to reclaim its natural wooded home from a vague enemy that has crystallized its friends. So the game does technically have a story, but outside of vague and wholly uninteresting cave art that you’ll stumble into, the story is of no consequence. It’s not that the game needed a thoughtful narrative, but the tale they crafted is strangely opaque and boring.

Squish doesn’t control poorly by any means; you’re able to dash in the four cardinal directions and jump. It’s simple and snappy enough that the platforming always lined up smoothly and I generally got around without issue. Semblance, however, doesn’t rely on platforming for challenge; it relies more on using its environmental deformation to solve puzzles. Squish can slam into certain parts of the environment to manipulate the shape of it. You might come to a wall that is too high to jump to until you go under the platform, smash it upward creating a higher platform to jump and continue. An enemy might be moving back and forth and the only way to get passed it is to create a hole in the ground to sit in and let the enemy pass overhead. On its face, the mechanics of Semblance sound enticing, and for the most part they are, but it feels like the developers at Nyamakop came up with a fun mechanic and then called it a day without actually mining the depths of what could be done.

Throughout the game you will encounter new twists on the gameplay like being able to smoosh your little blob of a character to be skinny and jump higher or flat and jump farther, or you might encounter lasers that prohibit dashing or deformation. The game isn’t completely resting on its laurels, but the puzzles were almost all plainly obvious once you figured out that area’s different mechanic.

The puzzles were simply never as creative as I expected from a game fashioned around the ability to deform the environment. That’s because your deformation is actually far more limited than they need to be. You can only smash into and deform platforms that are a solid purple color. This means that the developers are able to build more directly authored puzzles with a clear solution (although the game did definitely have puzzles that could be solved in more creative ways occasionally), but it also means that puzzles were usually just a matter of executing on an obvious solution. You can immediately see upon entering a puzzle screen which platforms can be affected and most likely how they should be affected to reach the orb at the other end. In a game like Super Meat Boy or Celeste this is fine because the sheer act of navigating your character is thrilling and challenging. Here, it often feels like the squandered potential of a good idea. It would have been much more interesting if the environments were more fully interactable and you had more agency over how to solve the puzzles rather than merely sussing out the solution.

Additionally, you are only able to manipulate a platform in one direction at a time. Meaning that from a platform’s default position you might be able to move it left or right, or create plateaus or divots from the bottom or top, but you can only do one of those movements at time. You always have the ability to hit the A button and reset all the platforms around you to their default positions, but it feels like they arbitrarily limited your options to maintain the simple platforming puzzle integrity rather than letting you do what you want and break the game. A smart design decision meant to protect what is overall a weak design.

Visually the game is nothing interesting. It starts off fine, with clean, solid colors that are somewhat reminiscent of the soft and colorful PixelJunk Shooter, but after a few screens you start to notice that the purples and greens offer little variety even considering that the game is remarkably short. I finished the game in maybe two hours. There were secrets scattered through the levels that offered a useful incentive to be thorough, but by the end I had no desire to scour the game for what I’d missed. When you finish the game, the only real option is to hit new game and do the exact same puzzles again for seemingly no reason. There are only four total areas that are made up of roughly 15-20 puzzles each, but considering they can be breezed through so quickly, it took hardly any time to reach the end of the game. An end that, by the way, was clearly meant to be a challenging final crucible, but, like the rest of the game, was over quickly and with little fanfare. It had you racing to finish the level as quickly as possible to avoid getting singed by a pesky laser, and while it was a serviceable culmination of the game’s challenges, it landed a little flat.

For what the game is, it is certainly not a failure. It has its one new mechanic and fails to capitalize on it, but it is perfectly serviceable for a couple hours if you have nothing else to play. Given that better platformers come out regularly it’s hard to recommend a game so hollow and soulless.

Semblance lets you deform your platforms to solve puzzles how you want, but it limits your tools so severely that the promise of that idea is wasted on mediocre puzzles. It has a neat look, but like its core mechanic, it wears thin even before you get to the end of your two hour trip through the game.

Nathan lives in Colorado catching Pokemon on the Go and at home. He previously spent three months interning for Game Informer before coming back to Gaming Trend to spread the good word on video games. His real passion, though, is collecting different versions of the 3DS and other weird Nintendo garbage. It's a never-ending quest for less space in his house.
Related Articles: Semblance
Share
Tweet
Share
Submit