2005 – Special Agent Francis York Morgan is vacationing in Le Carré, Louisiana, when Lise Clarkson is found dead, but her body goes missing. 2019 – Special Agent Aaliyah Davis has come to the now retired Francis Zack Morgan’s apartment to interrogate him about the case he supposedly solved fourteen years ago after Lise’s body is finally found a few days prior. In Deadly Premonition 2: A Blessing in Disguise, you’ll jump between these two time periods and protagonists to find the truth behind the Le Carré case.

The original Deadly Premonition isn’t exactly what I would call a “good” game. It’s got a lot of issues and superfluous mechanics that can make it a chore to play, but it’s gripping mysteries and wacky characters are what compel you to see it through to the end. It’s received a cult status for just how odd it is. This sequel/prequel seeks to bring Zack and York back for one more strange case, but instead of improving on what worked in the original, the game seems determined to frustrate and annoy you by doubling down on all the disappointments. Framerate? Even worse. Bad, pointless minigames? Tons. Waiting? Oh, you haven’t seen anything yet. Careless and harmful minority representation? In spades. While the good aspects like the story and character interactions are as good as the first game, that’s all they are. The fun of DP2 reaches the heights of the original, but never tries to surpass it even though this game is a lot harder to suffer through than its predecessor. 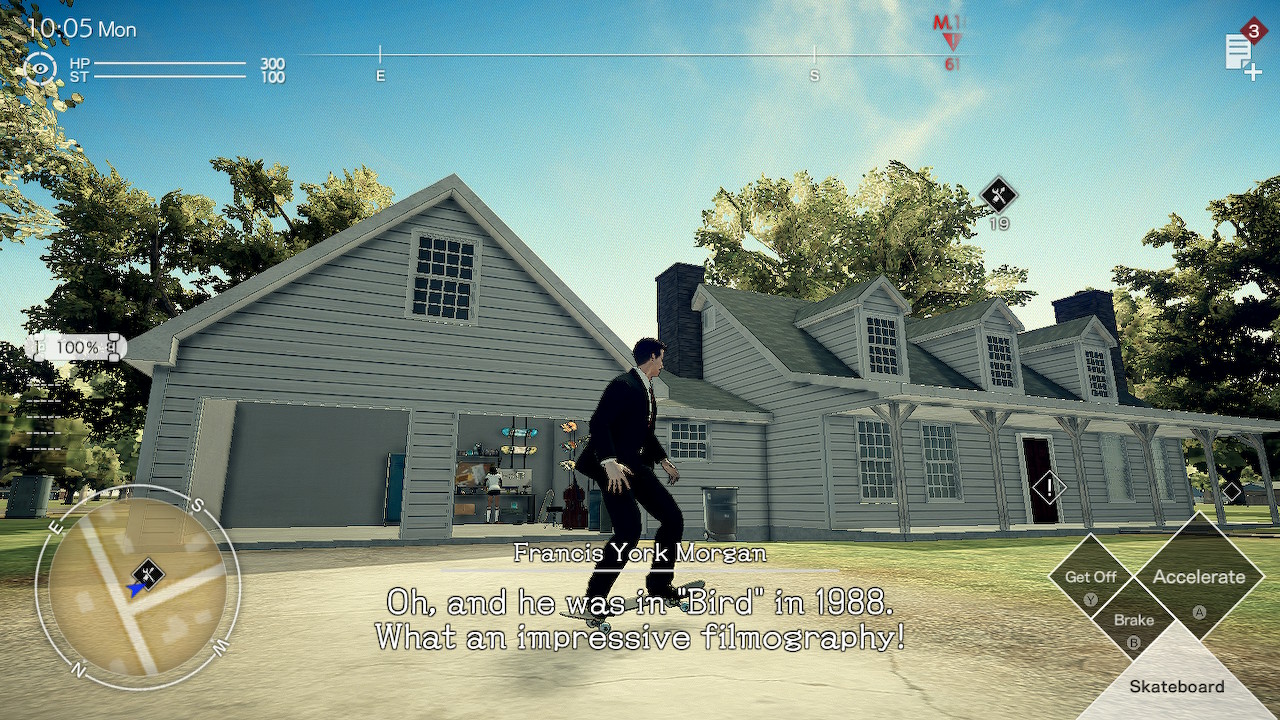 Some may argue that all of DP’s extraneous elements are what make it charming. I would argue that they’re what’s holding this duology back from being truly great games and reaching a wider audience. Whenever I try to recommend the games to anyone, it’s always followed by a “but…” “It’s a really interesting murder mystery! But you’ll spend most of the game driving around or in terribly designed dungeons.” For a more specific example, at a certain point in A Blessing in Disguise, you’re asked to gather various canned foods from around town. Two items are fairly easy to get, one is just purchased from a store while another is bizarrely hidden in a random vending machine. The third you have to order from a local restaurant, which only serves this particular on Mondays. I got this quest on a Tuesday. So, with no other avenues of investigation, I had to spend six in game days sleeping for 24 hours, eating something so as not to starve, taking a shower to not smell horrible, and going back to sleep until it was finally Monday and I could turn in the quest. It gets worse though, finishing this task will reward you with ANOTHER fetch quest, this time killing several types of hostile wildlife over and over in the hopes that they will drop the items you need (and note to game devs: having your characters state that something is boring and tedious does not make it less so)! Your final reward for all of this? A completely pointless set of drums, and an actual lead in the case York just happened to find on the floor. Hold on, let me just scream into the void for a bit…

Ok, let’s continue. Investigating the series of murders in the open world of Le Carré usually goes like what I just described: you travel between tasks with either the fast travel system or more commonly on York’s skateboard. If you take a look at any of the footage in this review, you’ll see that, in addition to looking terrible, the game runs, shall we say, sub-optimally. Framerates will never reach non-neausiating levels, aside from a single room you visit once late in the story. Character animations look stiff and unfinished, with character models seemingly having no transition animations between certain poses and contorting their bodies in whatever ways needed to get to whatever stance they’re supposed to be in for a line of dialogue. The voice acting, while uniformly excellent, is oddly missing in quite a few moments in cutscenes later on that are otherwise fully voiced. I suspect this may be because of a recent patch released to address the game’s transphobia, which brings us to the careless handling of minority characters. I don’t see how the patch fixed anything, since the trans character is still constantly deadnamed and referred to using the wrong pronouns, especially when talking about her pre-transition or coming out. There are also multiple characters of color, one of whom is handled… less than stellarly, a character with diminutive hight, and a seemingly autistic coded character. Unfortunately, I can’t go into how these characters are written without talking about spoilers, so skip ahead two paragraphs if you still wish to remain blind. 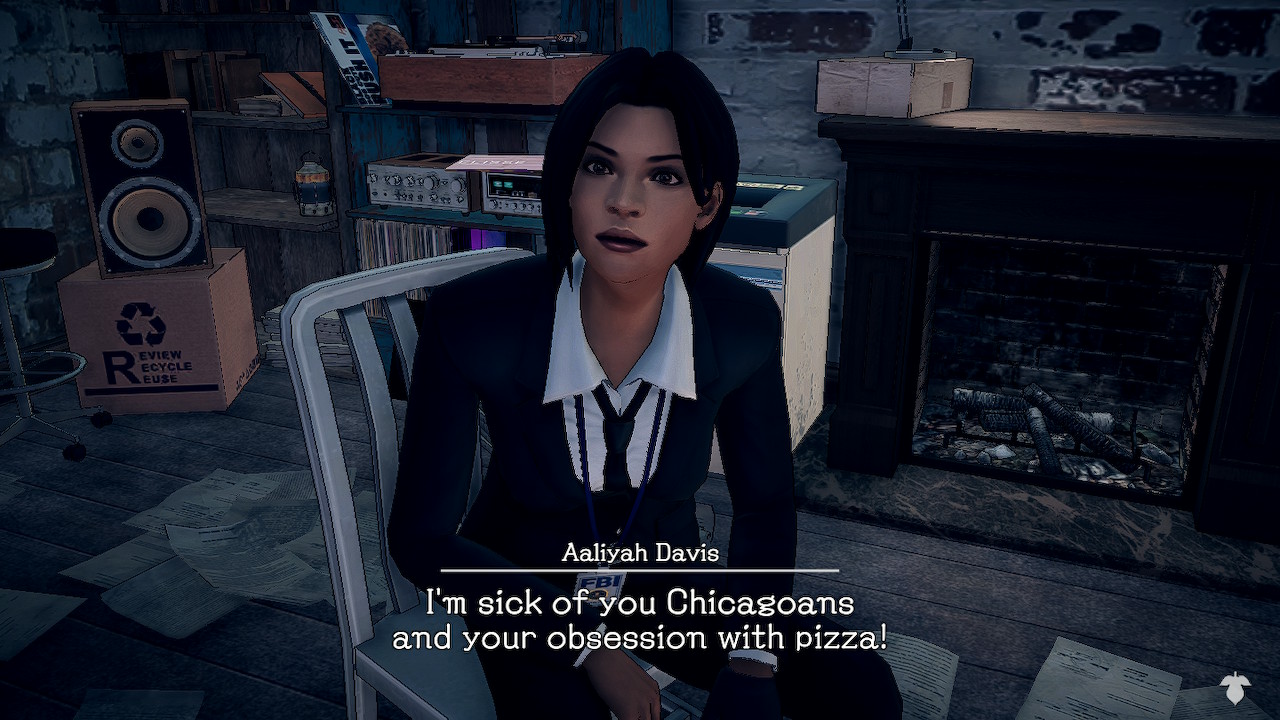 First let’s talk about one of the black characters, Houngan. He appears frequently throughout the adventure, granting York “oracles” (pretty sure that’s the wrong use of the word, but OK Swery) to guide him through the case. He takes on the appearance of a stereotypical Voodoo or Shaman character, with skull makeup, an elaborate headdress, and a white snake around his neck. I’ll preface this by saying I’m white as can be, but this made me feel very uncomfortable and seems pretty racist, especially when York tries to quote him by imitating his accent. The dwarf character, Chuck, didn’t initially strike me as offensive, though my sister later pointed out that he’s a stereotypical, angry small person.

Finally, the transfeminine character Helena Dauman basically ticks all the boxes of cis people trying to write trans characters without consultants, and like basically every other piece of media that has instilled a fear and hatred of transgender people such as Silence of the Lambs and Ace Ventura: Pet Detective these have no basis in reality. She’s one of the main villains, has weird sexual tendencies including an incestuous relationship, and is of course played by a male actor. I appreciate that before she’s properly introduced in the plot, York goes on a tangent about how we should respect people’s identities, but it feels disingenuous when this is followed up with him misgendering her and even implying that her transness is linked to her villany. It’s especially disappointing since this game is directed by Swery, the same person who made one of the best games dealing with trans issues, The Missing: J.J. Macfield and the Island of Memories. I honestly don’t know what to say, other than I’m massively disappointed in this creator. I thought you genuinely cared about minority representation in the media. You can do better. 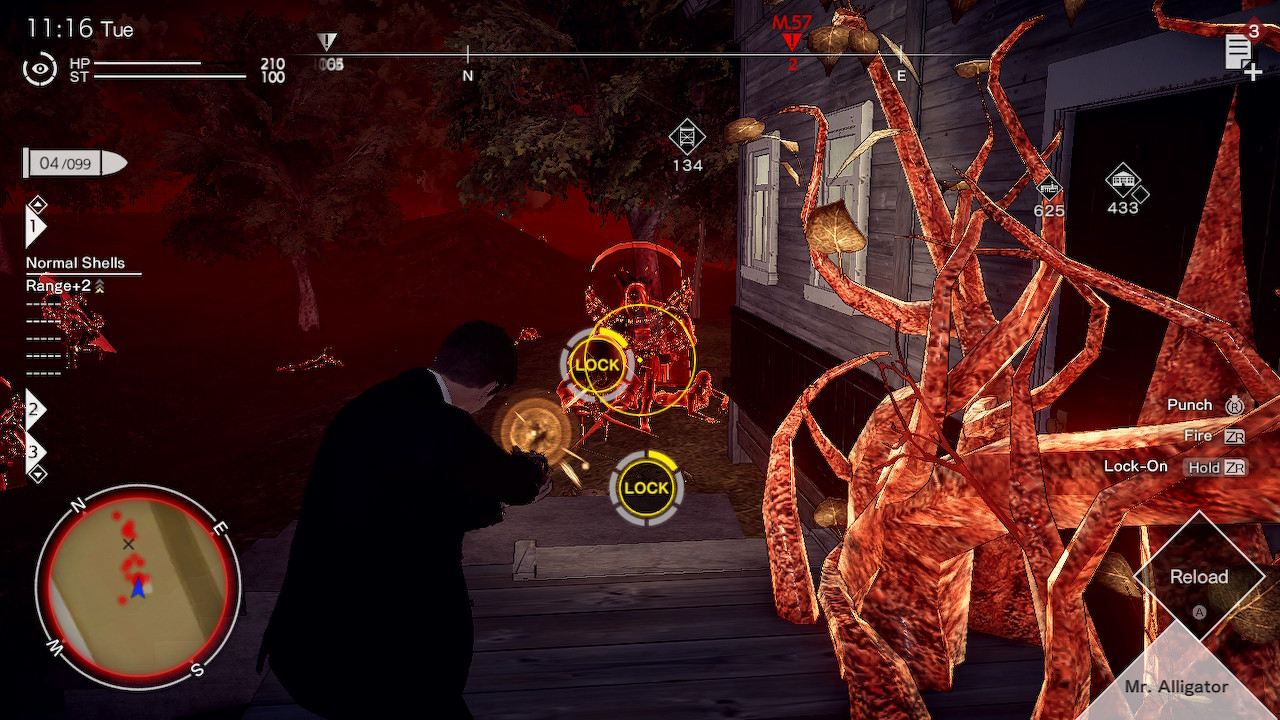 There are some really great parts of Deadly Premonition 2. The interactions between York and his assistant Patricia are great, Aaliyah is a cool and complex character, the time jumps are done very well, and the story is absolutely fascinating. Fans of the first game will find exactly what they’re looking for here, but those great moments are drowned in a sea of terrible gameplay and nonsensical design choices. The game world is still much bigger than it needs to be, but traveling around it is even slower without a car which can lead to moments like the story just starting to raise the stakes only to have you need to skate for five, real time, excruciating minutes in a straight line before the plot can proceed. If the game didn’t have things like the abundant, inscrutable minigames or the exact same dungeon over and over again with underwhelming and clunky combat along with several game breaking bugs, and was just a visual novel-like experience this would be a great game. As it is, however, Deadly Premonition 2 is a horrendous game that I can’t even recommend to fans of the original. Just watch the cutscenes online.

Deadly Premonition 2: A Blessing in Disguise

Deadly Premonition 2: A Blessing in Disguise is somehow much, much worse than the original. The game looks and feels awful, with an unacceptable framerate and PlayStation 1 level textures. While the story is great, it’s brought down by even more tedious gameplay and some harmful stereotypes.

David is the kind of person to wear his heart on his sleeve. He can find positives in anything, like this is a person who loved Star Fox Zero to death. You’ll see him playing all kinds of games: AAAs, Indies, game jam games, games of all genres, and writing about them! Here. On this website. When not writing or playing games, you can find David making music, games, or enjoying a good book. David’s favorite games include NieR: Automata, Mother 3, and Gravity Rush.
Related Articles: Deadly Premonition 2: A Blessing in Disguise, Indies
Share
Tweet
Share
Submit