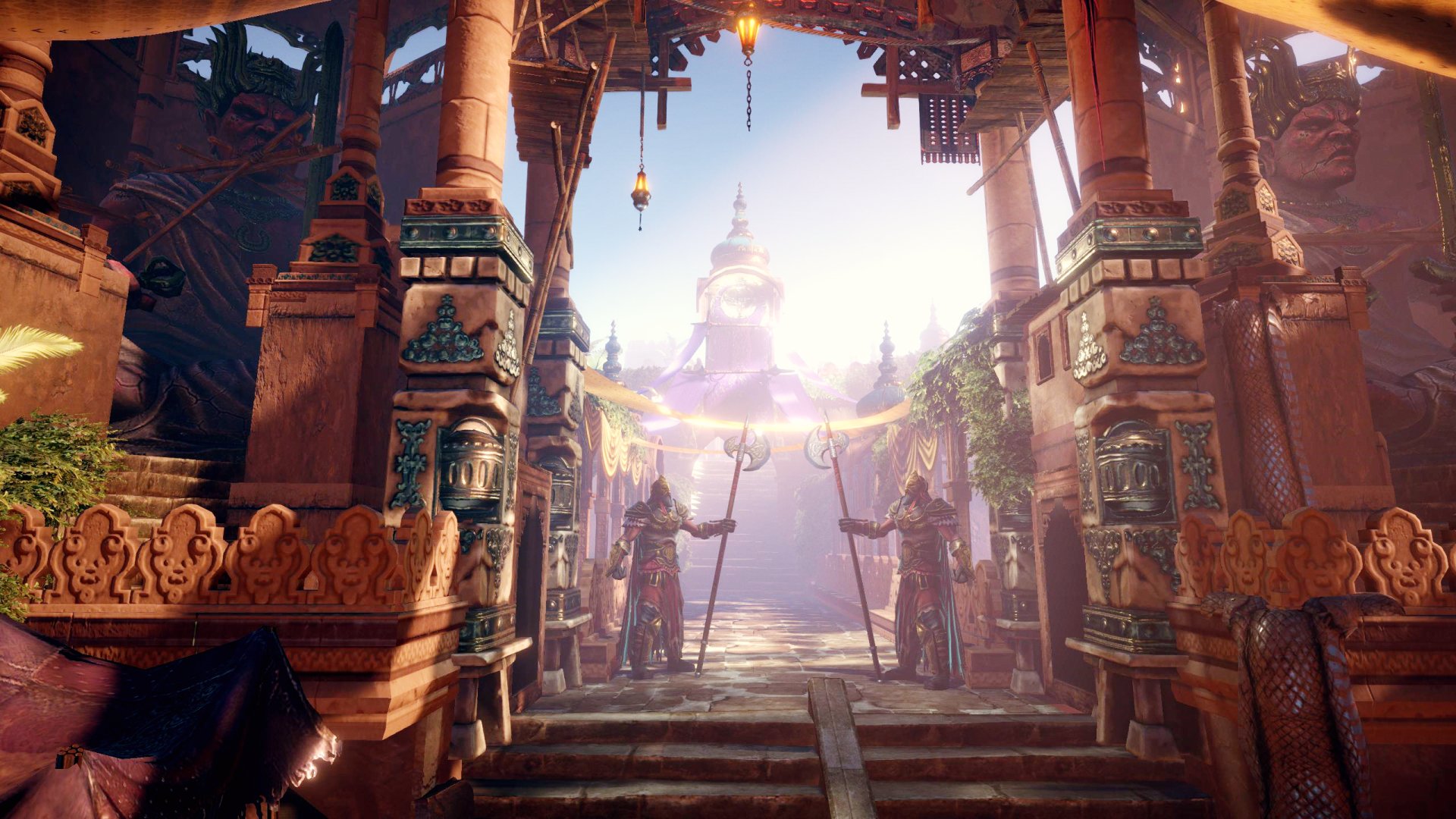 My fight against an evil mage and his zombie servant is the moment I realized I really liked Shadows: Awakening. The boss fight had me using my party’s different skills while dodging lasers and waves of fire. Thankfully, most of the boss fights are on this level. While it lacks the polish of a higher budget title and the story is well told, though it does lack originality. Shadows: Awakening shines when it comes to combat and character interaction.

Shadows: Awakening starts off with you, a demon known as the Devourer, being awoken by a mysterious old man. From there you choose your first soul to devour. Every soul you devour acts a member of your party which you can quickly swap between as they all inhabit the same body. You can choose between a thief, a wizard, or a warrior. Since I like to hit things with big hammers, I decided on Kalig the Barb…er…bandit king. For whatever reason, he really doesn’t like being mislabeled as a barbarian when he is clearly a bandit. The three characters all have their own unique dialogue, goals, and personalities making subsequent playthroughs feel fresh.

Kalig may be a Xenomorph, but he certainly isn’t a barbarian.

It doesn’t take long to get through the first tutorial dungeon and enter the city of Thole. Thole is a rather lively city with guards and merchants about and a few different side-quests to go through. While the graphics are nothing special, the art style is pleasant and the side quests do an exceptional job filling out the story of the city. One had me collect protection money from merchants and it was fun to see them not even complain or bat and eye at the intrusion. They are well aware of how the game is played and it made it clear they all have a system in place.

Thole is also where I realized that there are no hovering markers indicating NPCs have quests for you; you just have to talk to them and find out. I also appreciated having the option to turn off quest markers entirely and highly suggest you do so. While the game world does open up after Thole, it isn’t massive, but is incredibly fun to explore. Shadow: Awakening’s map is as big as it needs to be and is densely populated with enemies and quests which eliminates boring stretches of nothing that plague some massive open-world games. Exploring the world and finding the solutions yourself rather than following a guide is incredibly satisfying.

For a town besieged, Thole is very lively.

Since this is an action-RPG, it’s a good thing the action is the best part of the game. The story has you visiting several unique locations all filled with a variety of varied enemies, even if it isn’t all that interesting on its own. Find magic item and destroy magic item to save the world. It’s well written and the characters all residing in a single being is an interesting idea, though not fully realized in the realm of narrative. Where this one body system does shine is the combat. The Devourer can control three other puppets for a party of four. Each character can have up to three skills equipped giving you a lot of different ways to bash skulls in. This leads into a lot of character swapping to combine their best skills together. Switching to the archer to drop a bomb and then to the barbarian to smash the ground can clear large groups instantly. It is enjoyable go through all the different skill combinations to find which skills work best together and which group of characters is the most effective.

To compliment the combat is a great weapons and armor system. While loot drops far more infrequently than those who play Grim Dawn or Diablo may be used to, it is still plentiful enough and dropping less makes the weapons feel more unique and make the shops more than just junk collectors. Weapons and armors can be enhanced with essence which can add a wide array of different effects. Might can increase attack power, elements will give you elemental damage, while blood will give you lifesteal. This opens up even more customization options as you debate between which effects to give which weapons and characters. You also have one item that impacts the entire party, the soul stone. The soul stone is what you use to either heal or recover magic while in combat. The soul stones come with different abilities, charges, and recovery rate. It’s just another item to experiment as you decide if the extra burst of health is worth losing a few charges. These soul stones are recharged by either coughing up money to a shadow trader or killing a bunch of monsters.

These shadow traders can only be found in the shadow realm, which acts as a parallel dimension accessed by the devourer. The shadow realm has its own host of enemies, it’s own loot spots, and is used to find hidden passages or items for puzzles solving. It can also be used in general combat as a way to dodge projectiles or or powerful attacks as the regular world freezes in place as you move to the shadow realm making the demon a valuable contributor. The puzzles themselves are interesting, varied, and serve as a perfect antithesis to the fast paced combat.

The shadow realm has several uses, one of them is solving puzzles.

However, there are a few areas where Shadows: Awakening does struggle a little. The animations are very stiff, especially flying griffons. The griffons just look bizzare whenever they land and they also have the annoying ability to just fly through terrain. The Devourer is a demon and even he is bound by the laws of physics, well, the laws of magic. I’m not sure physics includes traveling between different realms. The voice acting is generally pretty good, the characters all sound unique and interesting, but they talk a little too much. Kalig especially has an issue of opening his mouth everytime I switch to him. “This challenge require a stronger warrior” or “do I have to do everything myself?” are lines that are now ingrained into my thoughts. Still, these flaws to little to detract from just how enjoyable a journey Shadows: Awakening is.

Shadows: Awakening is a damn good action-RPG. The combat is quick and varied while the characters are interesting. While the story lacks originality, it is still well written and allows the different characters to shine. There are a lot of different elements at play, and they all work together to create a fantastic experience.

Shadows: Awakening is a damn good action-RPG. The combat is quick and varied while the characters are interesting. While the story lacks originality, it is still well written and allows the different characters to shine. There are a lot of different elements at play, and they all work together to create a fantastic experience.

Austin Fern has been playing video games his entire life. The first console he truly fell in love with is the PlayStation 2 with Sly Cooper, God of War, and many others really leaving an impression. He enjoys all genres of games from FarCry 5 to Danganronpa and everything in between.
Related Articles: Shadows: Awakening
Share
Tweet
Share
Submit