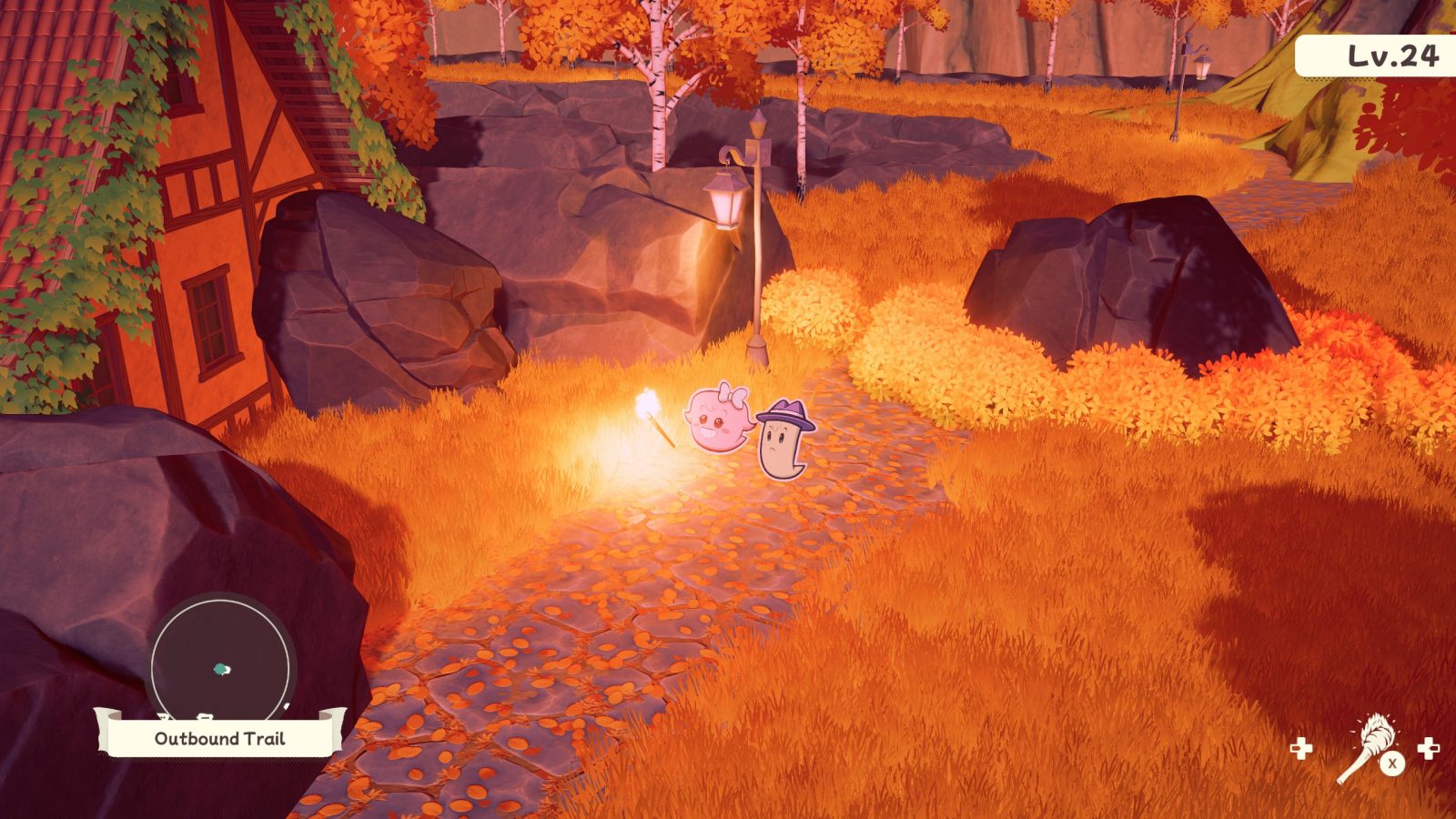 Everyone in Outbound has died. First, the town’s water supply was mysteriously poisoned, decimating the population, and then a serial killer picked everyone else off one by one. As a ghost with no memories, you set off to discover how you died, who you are, and why you can see and fight with strange figments of your emotions.

The Outbound Ghost is an RPG inspired by Paper Mario. It’s not afraid to show that influence off at all times, as all characters are rendered in a flat, paper style and you need to complete button challenges in combat to do the most damage. However, it feels like the game has no identity beyond that homage.

The game seems very promising on the surface. The art style is gorgeous, with simple yet appealing character designs and some fantastic Jazz and Blues tunes to accentuate the spooky/silly vibe. Once you dig a bit deeper though you’ll find a ton of gameplay mechanics and ideas that don’t really go anywhere. For example, while the initial premise is interesting, the plot itself goes absolutely nowhere for the six or so hours it takes to reach the credits. It doesn’t help that the writing is incredibly amateurish – it conveys information in a rudimentary way, but none of the characters feel like they have their own voice. It always feels like the writer is just finding the quickest way to move the plot forward while occasionally working in some jokes that don’t land either.

The game is divided into four chapters (with a fifth for exploration and revisiting bosses) and each has you play as a different character. You begin as Laila, the aforementioned ghost with no memories who is a silent protagonist… Except not really because they start to speak out of nowhere once you hit chapters two and three. Chapter 2 has the most interesting conflict and characters by far, but even then it still feels contrived and is resolved very quickly. While Chapter 3 is essentially just backtracking for cutscenes, Chapter 4 is an absolute pointless slog. You work your way backwards through the game to learn that the driving force behind the game, chasing a character named Adrian to ask what he knows about figments, could have easily been avoided if anyone talked to each other and then it ends with a plot point I had assumed the game forgot about. 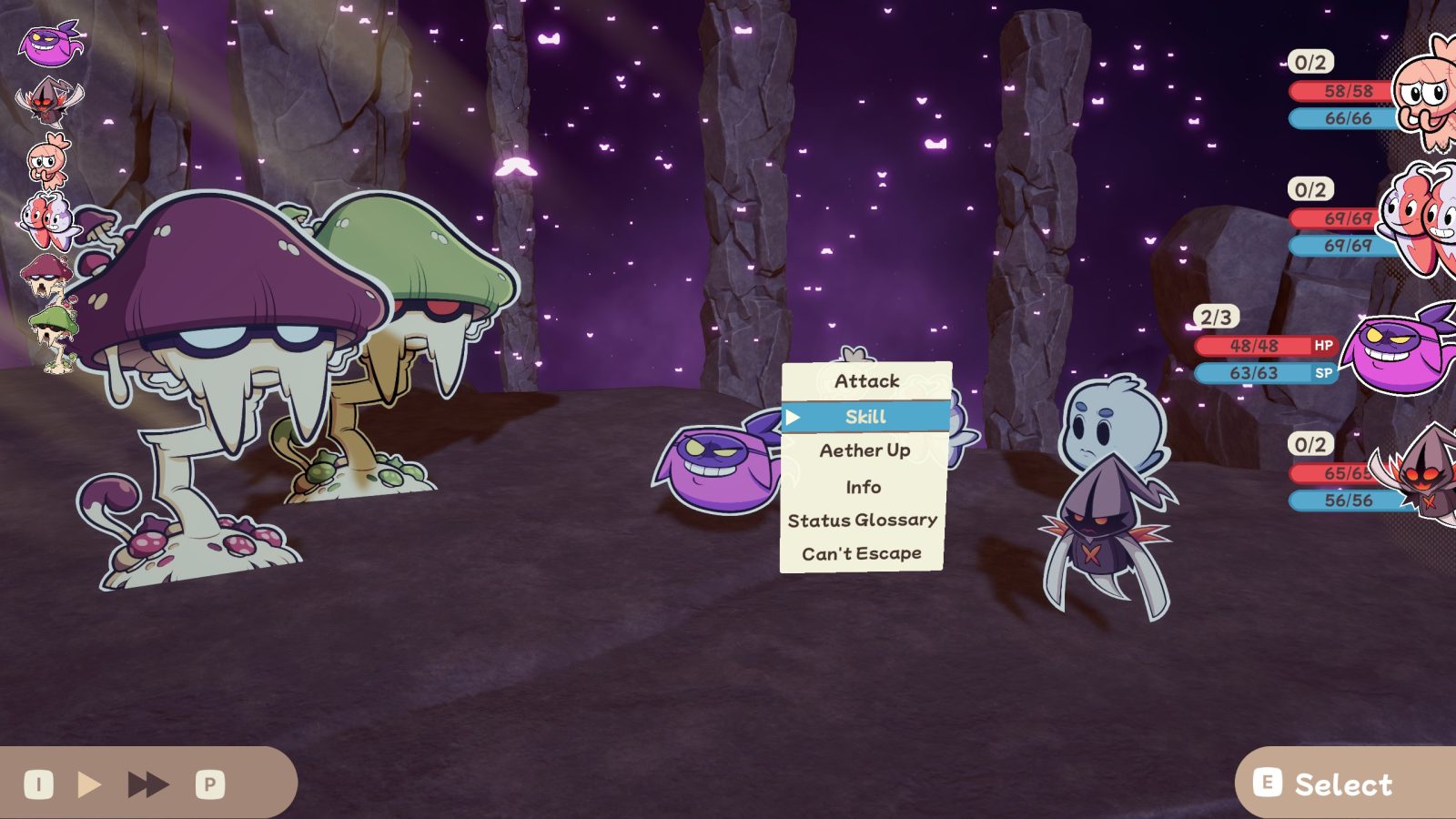 It’s not all bad though, the bones of a good plot are here and I did genuinely enjoy Mary’s story in Chapter 2. It’s just all so messy, meandering, and poorly written that it becomes a struggle to find the good. If the story was just a vehicle for the combat I could forgive it, and I’m already trying to go easy since this is an indie game, but the combat also feels like it lacks focus.

Instead of fighting yourself, you control aspects of your emotions called Figments which each have their own abilities. You begin with just one, Regret (which could be a genuinely great piece of gameplay storytelling if the game did anything with it), but acquire more through the story and by finding some on gravestones and defeating them. Battles are turn based, with the turn order displayed vertically on the left side of the screen. The number of actions you can take per turn is determined by how much AP, or Aether Points, that particular figment has. You’ll only get one AP at most per turn, but you can defend to increase your AP essentially stocking turns for later. You spend AP by attacking or using skills. Normal attacks and offensive skills will prompt a timing minigame where you want to press A when the marker is in the green part of the meter, but wait too long and the green will disappear entirely. The orange section will still hit but do less damage, while the red section will have you miss entirely. Each attack has its own timing, but it’s pretty easy to consistently hit the green after a while. 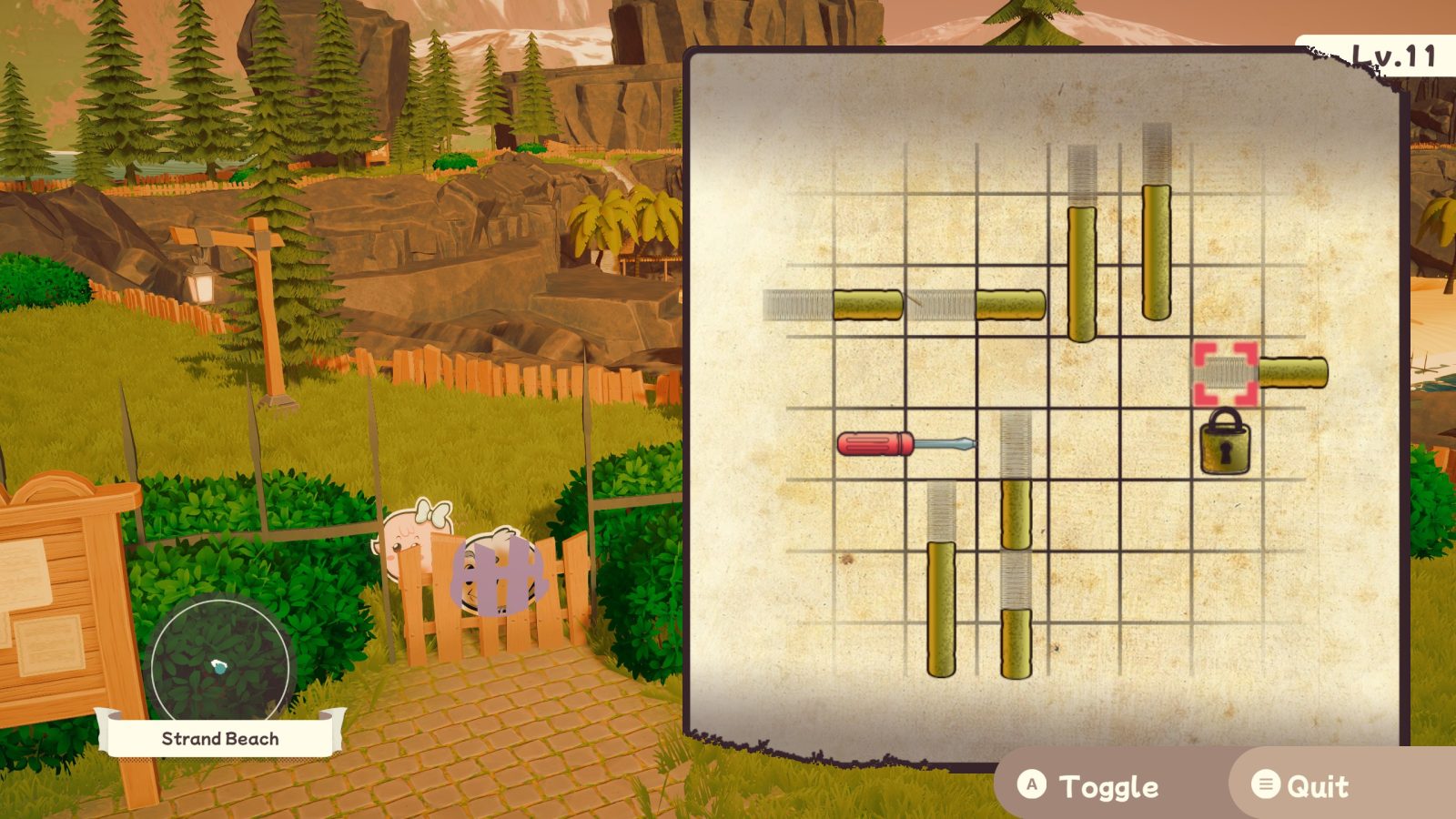 Skills also consume SP, essentially your magic meter. Skills can be attacks that hit one or more enemies, healing spells, or buffs and debuffs. Again, this feels like the structure for a good combat system, but every fight feels like it boils down to a DPS race. My main strategy by the start of Chapter 2 was to cast poison on every enemy, then just hammer them down and that worked for 99% of the game. The only time I ran into any resistance was against a boss that used that strategy against me, ironically, and it felt like it came down to luck as to who would kill who first, so much so that I just set the game to easy to get past. You can customize Figments slightly using craftable Aspects and equipping them in one of three slots on each character, but I never really felt like these made a difference. You can customize the game to your liking and even add modifiers to your playthrough at the start, which is very cool and a feature more games should have, but from what I could change I don’t think it would have made battles more enjoyable.

Outside of combat you’ll explore and use field items like a shovel or a torch to find items and solve puzzles, and by that I mean the game forgets about puzzles entirely about two or three hours in. I mean, the puzzles weren’t great, but it was something to do outside of walking and mashing B to go slightly faster. There are a variety of environments, but there’s nothing to really do or see in them. They’re pretty, sure, but just feel like a slightly open ended hallway pushing you towards the next cutscene. 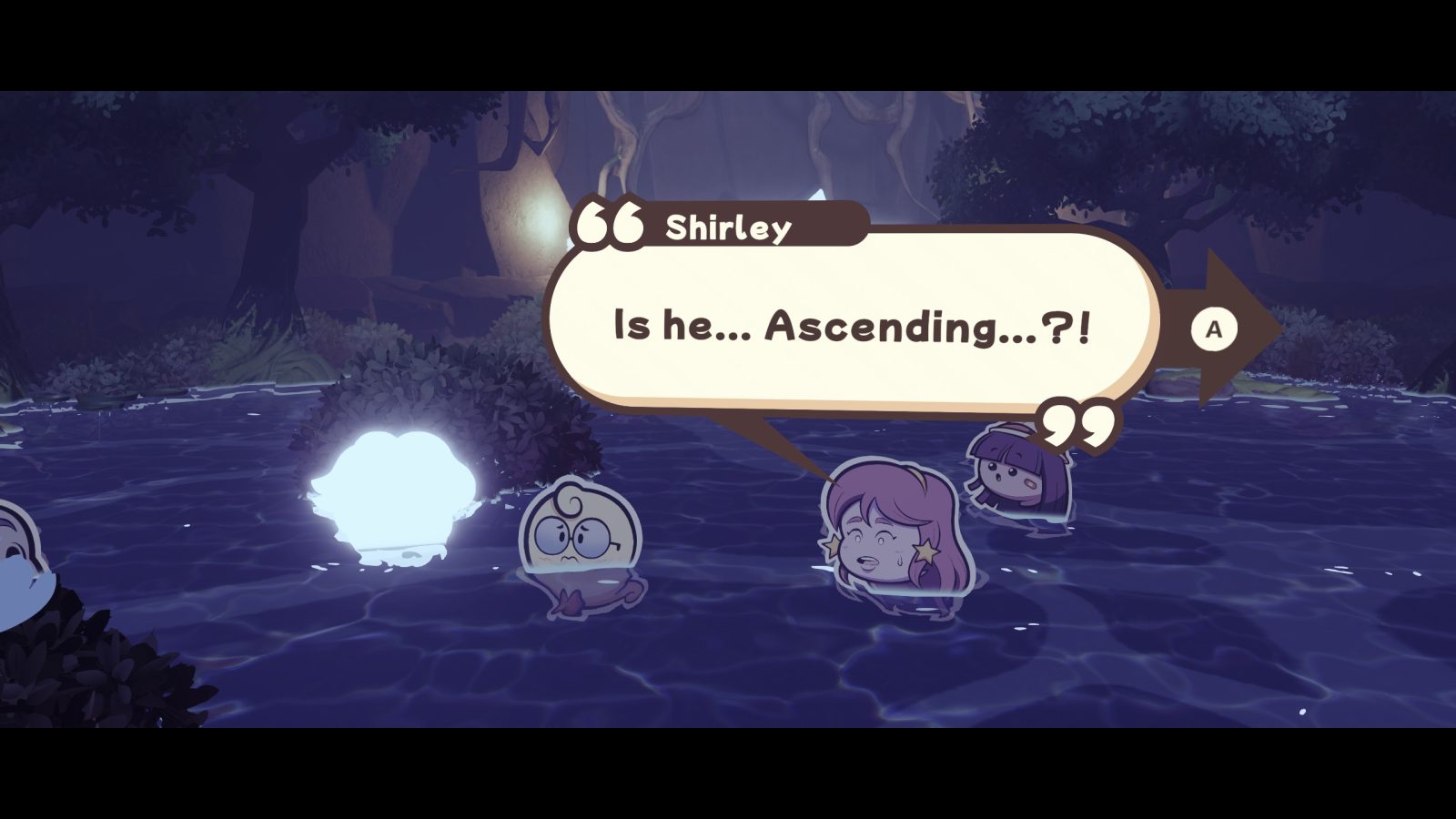 I hate being so negative about this game, because it’s clear the team cared a lot about this project, but it feels like much of their effort went to the wrong places or just threw in whatever ideas seemed cool. As I said before, the art style and music are fantastic, but that’s about it. I played the majority of the game on my new Steam Deck and it looks and runs great on both that and PC, so I’m glad I wasn’t at least stuck to my desk to play this. I think there’s heart somewhere behind The Outbound Ghost, it’s just buried behind mountains of poor writing, design, and gameplay.

The Outbound Ghost looks and sounds wonderful, but that’s about all there is to enjoy here. Exploration and combat are both incredibly tedious, and the story meanders for about six hours until it ends with nothing resolved. I want to like this game, but it feels like it lacks any sort of central vision.

David is the kind of person to wear his heart on his sleeve. He can find positives in anything, like this is a person who loved Star Fox Zero to death. You’ll see him playing all kinds of games: AAAs, Indies, game jam games, games of all genres, and writing about them! Here. On this website. When not writing or playing games, you can find David making music, games, or enjoying a good book. David’s favorite games include NieR: Automata, Mother 3, and Gravity Rush.
Related Articles: Indies, The Outbound Ghost
Share
Tweet
Share
Submit