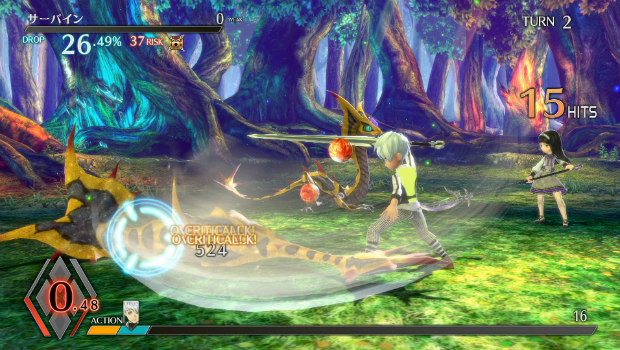 JRPGs are stagnating, that’s pretty well known and low hanging fruit at this point. Some are finding comfort in that stagnation, while others are tinkering with ways to make JRPGs feel familiar, while also providing a relatively new experience to players. Exist Archive: The Other Side of the Sky is definitely in the latter category, with interesting ideas mixing with classic elements throughout.

While I feel the “A for Effort” ideal applies well to video games innovations in general, Exist Archive misses the mark here. A sloppy mish-mash of JRPG and platforming gameplay, Exist Archive is interesting, but not very fun in the long run. The overall packaging around the game itself is of high quality, however, making Exist Archive sort of the “Bizarro” JRPG of its time.

Perhaps the best aspect of the game is the story:  a young man dies in a road collapse, and the last words that he hears are not very pleasant at all. When he awakens in the afterlife, he has to ponder those words while seeking the meaning of his existence. A powerful disembodied voice and a naive young girl are his first companions in this new world as he searches for answers.

The story is surprisingly complex and deep, and the characters have a realistic and human quality that is rarely seen in modern JRPGs. There are a few exceptions to this, but for the most part it is pretty refreshing. The dialogue is less stiled than usual, and rife with exposition.

The gameplay is a mix of platforming and fairly classic JRPG mechanics. The game has an overmap more akin to a Super Mario game than an RPG. You open up different zones which are just “levels”, and you can return and play them repeatedly, with explorable zones and secrets to be found.

In these levels you get to play a fairly tepid and basic platforming game. There are very basic hazards and battle triggering enemies on each map, but things are more designed for exploration than anything else. These segments can really drag on and it’s very easy to get lost, even with a mini-map available. You travel left-to-right across each level, and there are also certain spots where you can travel in or out, taking you to a different room or segment of the level.

The battles are turn-based, but each side attacks all at once, which can cause for chaotic action pretty quickly. Instead of having complex menus and attack options, the battles are just four buttons, with one for each character. It’s fast, works well, and actually looks pretty great as characters will all attack together instead of standing around.

On the other side, enemies all attack at once and you use the same button for each character to “guard” in this phase. This repeats itself until the battle is over.  There is a speedy simplicity that’s enjoyable with these battles.  However, they are very basic turn based battles, and will get old very, very quickly.

The disappointing potential is a siren calling you towards rocky, boring death. Something is missing, or to state it better, something should be missing.  The main problem with Exist Archive is that the battles and platforming are separate. In a perfect world, the simplified “one button, one character” model for battles could easily apply to the platforming segments, and that would intensify the pressure and allow for more hazards and pitfalls.

Mixed with RPG mechanics, the separation makes battles less active while the platforming segments end up less hazardous and more utilitarian. This one change alone would make Exist Archive a great release, and ends up being a missed opportunity.

The graphics are high quality and the design is full of bright colors and forest-esque dreamscapes that capture the idea of being in an afterlife pretty well. The character models are somewhat disconnected however, as they look very childish looking while the case is supposedly young adult to adult. Some are better than others, but the main character is especially strange looking, reminiscent of the cyborg child from Fallout 4.

Exist Archive: The Other Side of the Sky

Exist Archive: The Other Side of the Sky is a test as much as a game, with some interesting new ideas being applied to a pretty standard JRPG. There are some highs and some lows, but the overall product is lacking in severe ways that are amplified by the generally promising new concepts. However, a strong story and some exploration options make this a game to consider.

Patrick Rost has been with Gaming Trend since 2013. At first focused on sports coverage, Patrick has gone on to cover a wide range of games and other products for the website. Outside of Gaming Trend, Patrick writes and records music, grinds perpetually in Elder Scrolls Online (PS4), and lives day to day with his two dogs, Bob and Stella.
Related Articles: Exist Archive: The Other Side of the Sky
Share
Tweet
Share
Submit