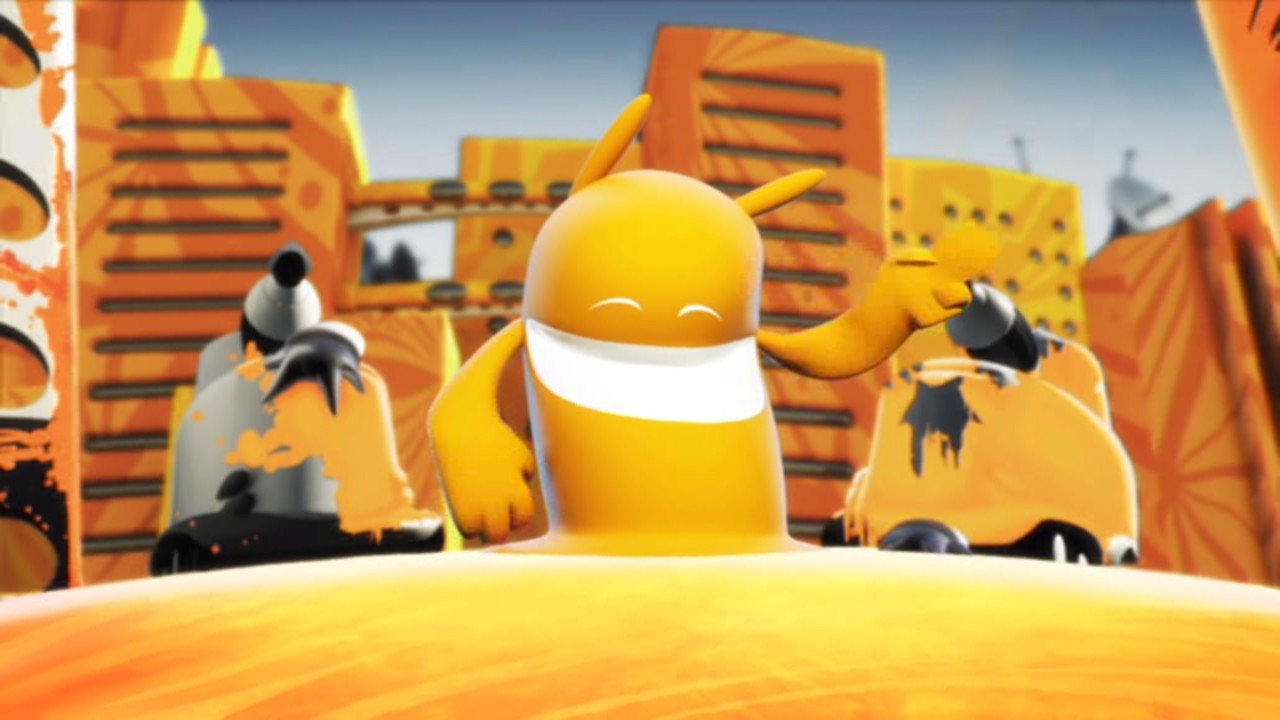 Long before Splatoon was a Nintendo success, a little developer called Blue Tongue Entertainment released the sleeper hit De Blob on the Wii in 2008. It’s since seen numerous ports and versions on different consoles throughout the past ten years, and we’ve finally got a Switch port of the game. While the game has aged a little in some parts, the overall package and innovation has still held up for the most part.

De Blob puts you in the role of the titular Blob, an amorphous little protagonist that has joined the Color Underground that’s against the nefarious INKT Corporation. Chroma City has turned monochrome thanks to the dastardly deviants, and it’s up to the Color Underground to save the day with color. Through some goofy cutscenes and text loading screens, you’ll get the story between levels.

The game feels akin to an open-world sandbox, albeit timed and with a set goal to score as much points as possible. Blob can waltz around levels with the use of the analog stick, which has improved since the original Wii release thanks to the omission of mandatory waggling. I played a bit of the original release a while back but didn’t feel like the original control scheme was conducive to gameplay, and would flail around with no real purpose. Getting to control Blob through analog sticks and button presses feels a lot more natural, and I really did like the minor control scheme changes of this Switch version.

The main goal in each level is to convert the gray world into a multicolored one, which you can do by hitting Paintbots scattered around the level and going up to buildings in order to paint them. While there are three different Paintbots that represent a primary color (blue, yellow, and red, but feel free to fight me if you consider green a primary color), you can mix and match different Paintbots to create up to four secondary and tertiary colors. Paint points are also your health, and you expend them by painting or getting hit with black-inked baddies. Through these colors, you can paint around the level’s setting and rack up points. By earning enough points, you can unlock different gates that will open up more parts of the stage, culminating with the end of the level after enough gates are opened. This reminds me of the progression system in Katamari Damacy’s stages; they slowly open up, allowing you to find new nooks and crannies of things to do.

While you will have to paint things in order to get points, you’re also on a timer; it’s generous enough that it’s not a stressful thing to worry about, but it still causes a sense of urgency if you tend to dilly-dally. You can, however, add more time by saving Raydians (residents of Chroma City that have been plagued with INKT’s monochromatic sadness), as well as completing different missions. These missions range anywhere from coloring a certain area of the level one color or defeating INKT Corporation goons. By the time you finish a few stages, the mission structure can feel a bit repetitive, but the core gameplay is fun enough that the monotony doesn’t set in until later in the game.

Something that doesn’t get old, however, is De Blob’s excellent soundtrack. While each level starts out with a subdued and idyllic soundtrack, every color has its own audio theme to it, from a cool jazz motif to bombastic DJ scratches. The soundtrack is dynamic and changes when you complete missions and transform the scenery, and it’s just a treat to listen to each track. You can adjust your soundtrack before each level, and all the songs are audibly diverse and have an infectious hook.

In addition to the regular campaign, you’ll also get post-level challenges that are a little more difficult than the main levels themselves. You also unlock the ability to free paint finished stages, which takes the time pressure away and lets you focus on making your own painted masterpiece of a city. There are also some multiplayer challenges that you can do with friends, though they’re not as engaging as the single-player campaign.

While the main package of De Blob is a solid time (especially if this is your first time playing the game), you can see its age through the presentation. The before-stage cutscenes are pre-rendered CGI, and for some reason it’s grainy and untouched from the original Wii resolution. That’s kind of sad, considering the in-game portions of De Blob are remastered quite well in docked mode. Handheld mode is also kind of spotty, as it doesn’t quite capture the same feel of the game and there are some noticeable framerate dips while playing on the go.

It’s not that much of a dealbreaker, but seeing the game function on the other current generation of consoles as well as the aforementioned docked mode on the Switch, it does make me want to play on my TV more than I do with handheld mode. While I did appreciate the overall improvement to the control scheme, there were quite a few times where the physics of the game caused Blob to move rather erratically, causing me to fail a mission because he jumped haphazardly into a pit of ink rather than to the next building.

While it definitely shows its age visually, De Blob’s Switch version is still a wonderful time for those that have been fans of the game or to newcomers of the quirky platformer. Its wonderful sandbox style and marvelous soundtrack will make for a good experience if you can overlook some of the presentation issues within.

Elisha Deogracias is an aspiring accountant by day, freelance writer by night. Before writing for Gaming Trend, he had a small gig on the now defunct Examiner. When not being a third wheel with his best friends on dates or yearning for some closure on Pushing Daisies, he's busy catching up on shonen manga and wacky rhythm games. Mains R.O.B. in Smash. Still doesn't know if he's a kid or a squid.
Related Articles: de Blob
Share
Tweet
Share
Submit