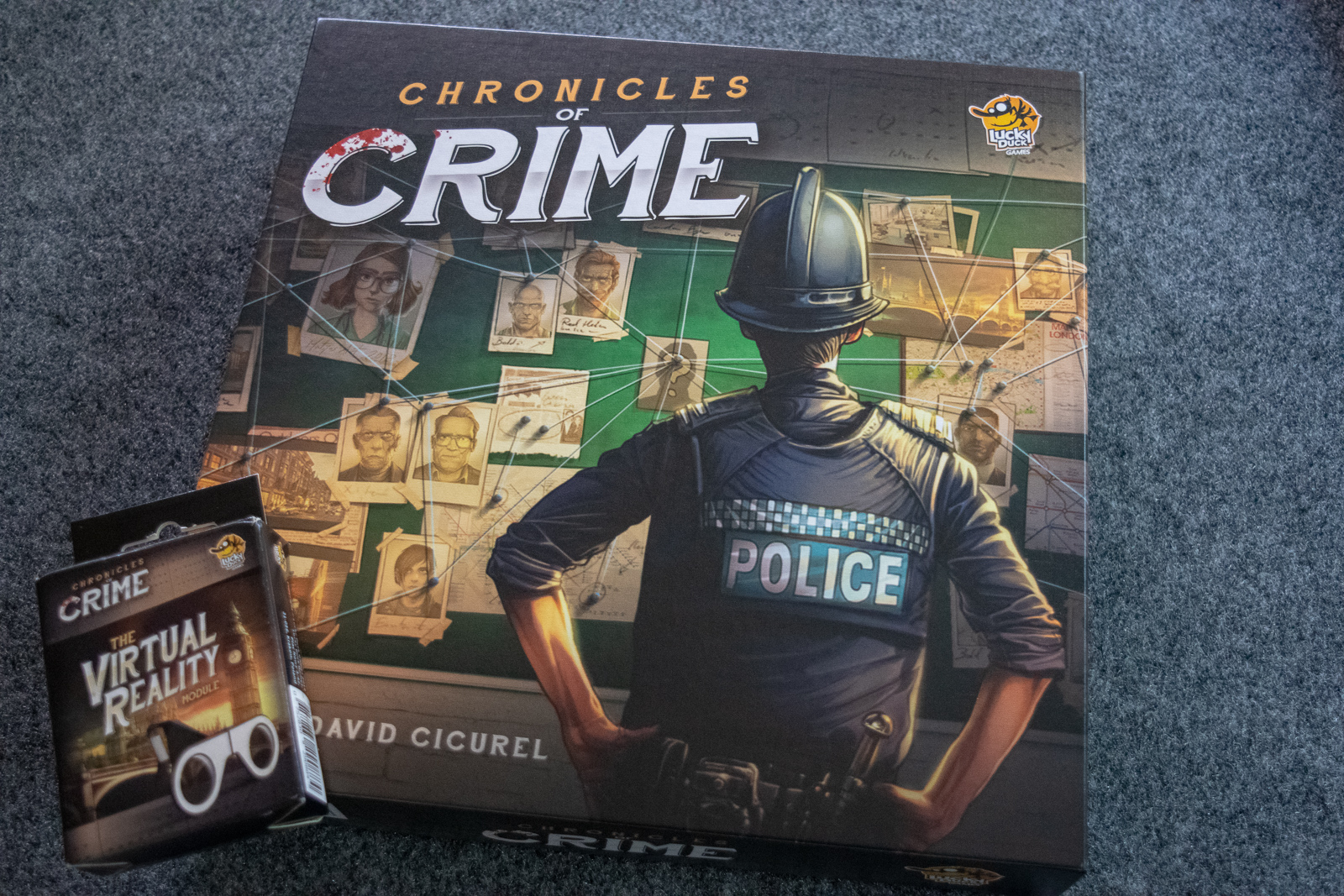 Very few genres of film and television are more consistently popular than procedural crime dramas. Dragnet, Columbo, Law and Order, CSI- the genre has been a dominant force on the television for decades, and few can resist the modern whodunit. When it comes to the table, however, crime solving games typically struggle to balance game mechanics with maintaining narrative tension. Chronicles of Crime by Lucky Duck Games solves this by offloading the narrative and key aspects of gameplay onto a mobile app, an approach that works surprisingly well even after the novelty of it wears off.

Before we get to the app, though, let’s talk about what’s in the box (you can also watch this video): The core set comes with a very thin rulebook, 40 character cards, 35 evidence category cards, 10 special item cards, 4 forensic contact boards, 12 location boards, and 1 thick evidence board, which is the centerpiece where all the other cards and boards are placed during play. All of these components are very nicely organized in a plastic tray in the box, and the cards are stored under a clear plastic lid so that they stay in place. I am a big fan of games that provide sensible component storage, and Chronicles of Crime even provides ample room for additional expansion cards and boards (and even possibly dice?). There is also a spot for the add-on Virtual Reality Module, which I am including in this review. The module includes a set of collapsible VR glasses, a cloth bag to store them in, and a download code for an additional scenario. 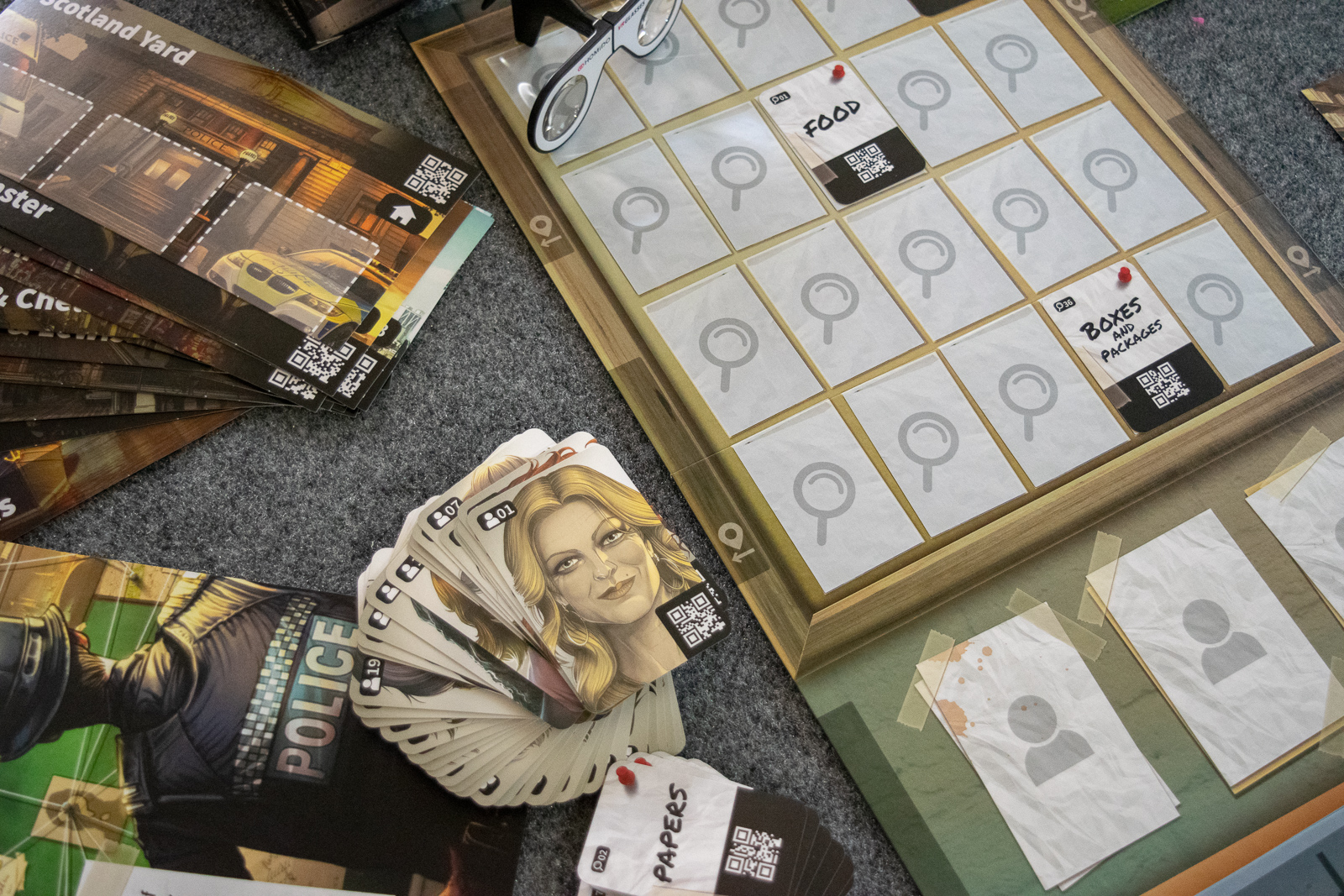 Each card and board prominently bears a QR code and an identifying number or letter designation. The character cards and board art is nicely illustrated in a well rendered modern comic book style. The game is set in present-day London, so naturally the location boards all represent actual places in London. Character cards are headshots of various people (who all look suspicious!) and the 4 forensic contact boards represent specific characters with their name and field, but item and evidence cards are slightly more abstract, bearing icons instead of more specific images.

After downloading and starting up a scenario in the mobile app, it becomes clear that the game itself actually is the app, while the cards and boards are there to supplement it. The base game comes with five scenarios (three of which are linked into a longer narrative) and a tutorial, while the VR pack comes with a code for one more. Additional scenarios can actually be purchased within the app, and there is even a button to download community made scenarios. 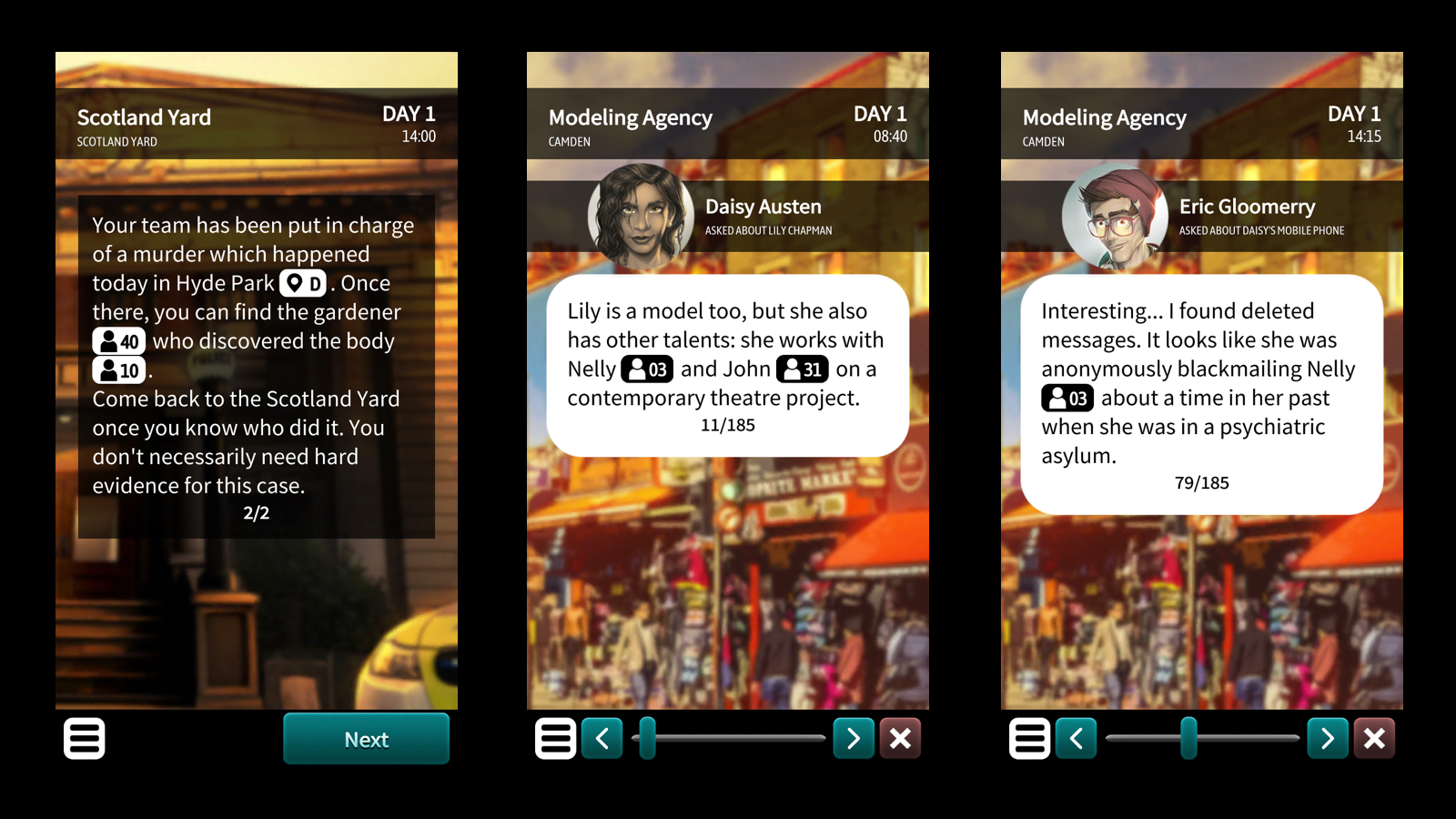 A few screens from the mobile app.

Each scenario casts you and your fellow players as detectives for Scotland Yard, and the first character card you are prompted to draw is your chief for the scenario. The narrative kicks off by providing the initial location board and any potential character cards at the scene (one of which may be a victim). The location board is placed on the edge of the evidence board and character cards are placed on the slots indicated on the location boards. One player reads the narrative aloud for the group and scans the QR code on the location board to start the group off at the scene of the crime. From there the game centers around chaining QR scans to ask witnesses questions- for instance, if it is a murder scene and one character card represents the victim and another card represents someone at the crime scene, you first scan the witness, who will appear on the app and provide dialogue, you can then scan the QR code of the murder victim, which basically asks the witness about the victim, unlocking more dialogue.

If the location displays a button to search for clues on the app, pressing the button prompts you to hold up your device and prepare to look around- this is where VR mode comes into play, but it is totally optional. If you snap on the VR lenses, you can hold the device up to your eyes and actually search the area via a 360 degree image. The player then calls out any potential clues they see in the image, while the other players match them to evidence cards. Without the VR glasses the device goes to a single 360 degree image view instead of stereoscopic, and there is also a way to tether multiple app-enabled devices to act as additional viewers, though this feature was less intuitive than I liked. Each search session lasts 45 seconds, and multiple searches can be made- other players tend to find clues that were initially overlooked. QR codes on the identified evidence cards are then scanned and placed on the evidence board- witnesses can now be asked about these clues during the investigation. Additionally, forensic contacts can be scanned and asked about people and items as well. It’s always a good idea to contact Scotland Yard’s resident hacker if you find a cell phone or computer at the scene of the crime, or the forensic scientist to examine a blood sample or murder weapon. 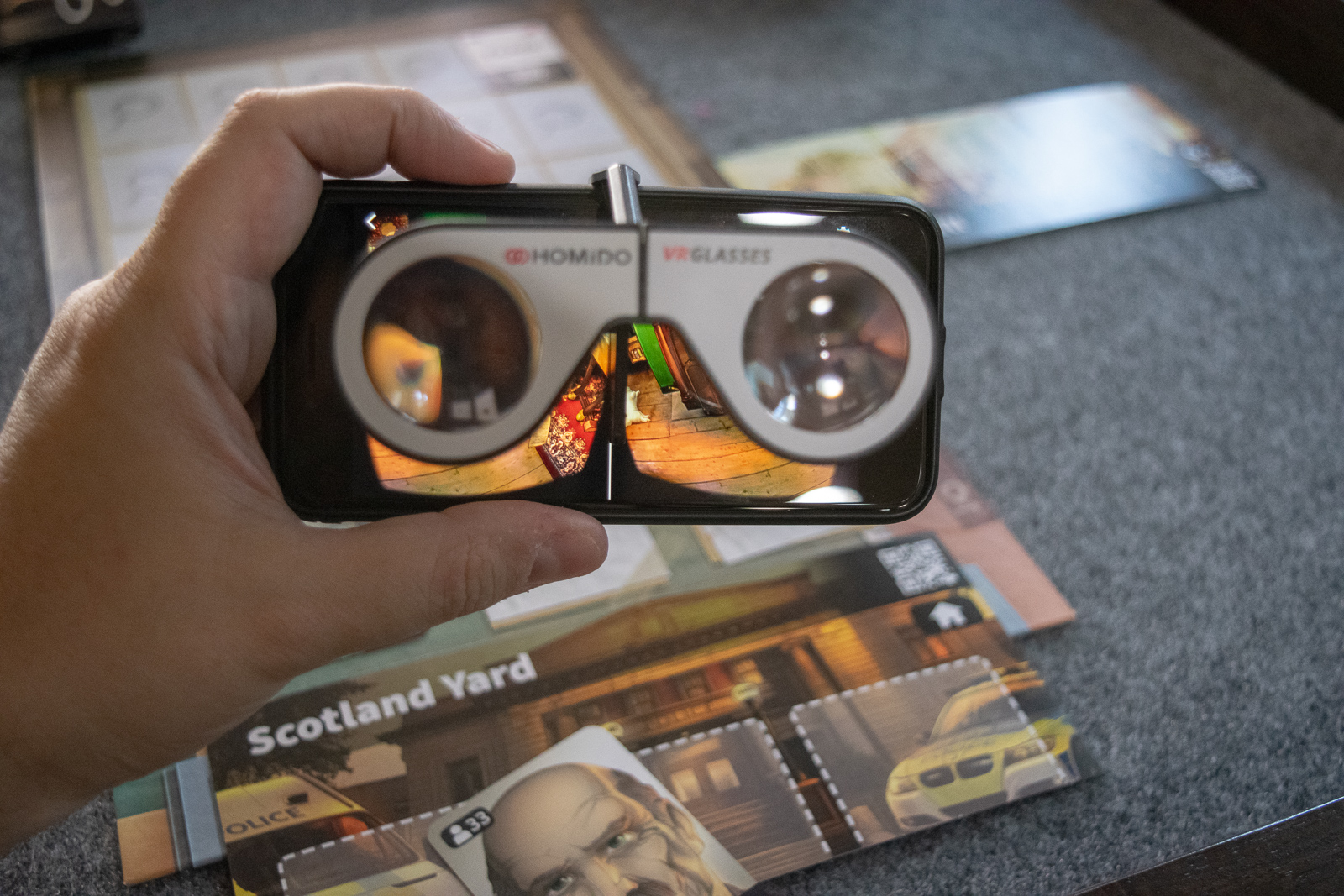 The generic quality of the evidence cards, while very flexible in terms of how they can be utilized in different scenarios, proved to be one of the more problematic aspects of the game. Occasionally, we would identify a potential clue and not be sure which evidence card made the most sense, and if a code is scanned for an item that isn’t present, the app will reject it. On some of the more advanced scenarios we found clues that were similar or the same as evidence cards we previously identified and already on the evidence board- should we scan those again? And often we would forget which specific clues were represented by the very unspecific titles on the cards. Curiously, special item cards, which were designed to represent specific items in specific scenarios, were unnecessarily vague as well.

Time is also a key aspect of the game- each time you scan a code, the clock advances, and the potential for additional murder victims or even escape of your quarry grows. At the early stages of an investigation this doesn’t seem like a big deal, but if you waste too much time the chief will call and announce a new wrinkle to contend with and likely yell at you for taking so long. While we never took so long that we lost the game, there were quite a few instances where it resulted in a death of a witness, or another crime committed. Taking too long will dramatically change the narrative, and sometimes affects your final score. 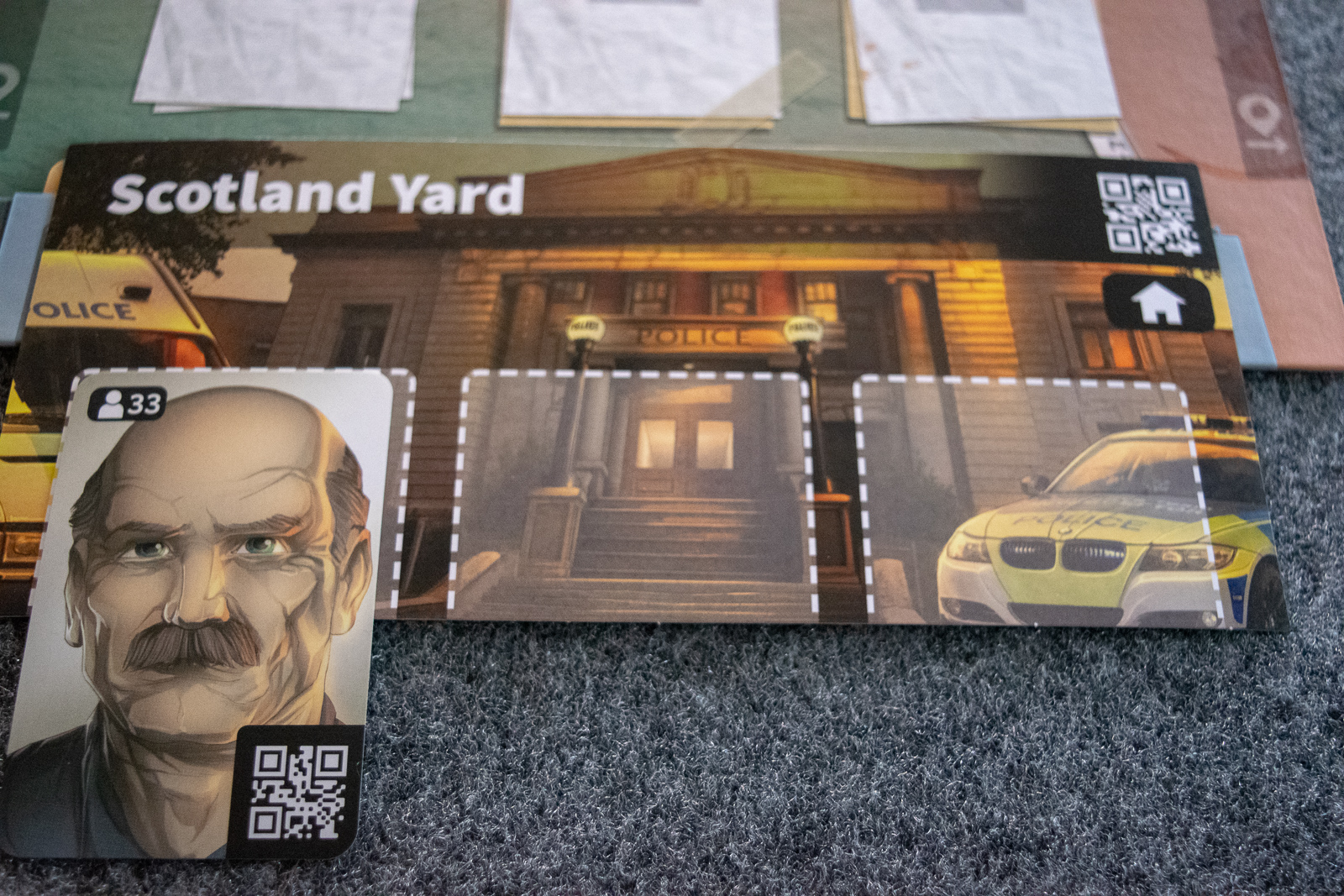 As your team continues to question witnesses/suspects, the investigation leads to more locations, characters, and clues, and it’s up to the team to discuss and solve the case. This can often feel tedious, as you will find yourself going through the same dialogue paths if you go back to the same character for questioning. Once the team feels it is ready to solve the case, it’s time to scan Scotland Yard and go to the chief. Hitting the solve the crime button prompts a series of questions, the answers to which are the QR codes of the various cards and boards uncovered during the investigation. Those answers are scored by the app, and if a minimum value is met, your team wins the game and the full mystery is explained. If you don’t win, however, you can always go back and play the scenario again.

Chronicles of Crime is recommended to be played with up to four players, though due to the cooperative nature it could certainly be played with more, but I wouldn’t recommend it. To be honest, I even had fun playing it solo, though I found the game to be at its most enjoyable with two players. I missed the discussion and theorizing when playing by myself, but things got more chaotic the more players there were and at a certain point some players just get bored while watching the others do stuff. This was also a fun game to play with people who aren’t into more complex boardgames (such as my wife), as the complexity in the game lies more in the actual content of the scenarios than the game’s mechanics.

A solid collaborative investigation game, Chronicles of Crimes leans heavily into technology with its app-driven gameplay, creating an experience that captures the essence of being in a procedural crime drama quite well. While some of the generic quality of its physical components can sometimes make things a little confusing, the carefully crafted narratives and extensibility of the game more than make up for it.

Mike Dunn is the old man of Gaming Trend, having cut his teeth on Atari consoles and First Edition Advanced Dungeons & Dragons back in the day. His involvement with Gaming Trend dates back to 2003, and he’s done everything from design and code to writing and managing. Now he has come full circle, with a rekindled passion for tabletop gaming and a recent debut as Dungeon Master (nearly forty years after he purchased the original DMG).
Related Articles: Chronicles of Crime, Tabletop
Share
Tweet
Share
Submit