In the early days of video games, we primarily had single player games available. As time passed, people wanted the chance to play more games with or against their friends. The creation of split-screen modes in games made this a possibility and made gamers happy. Now, what if you were playing a split-screen game by yourself instead of working with a friend? A Duel Hand Disaster: Trackher gives you an answer with an experience that tests your ability to multi-task and take on two different roles at the same time.

When playing, you have two screens to keep an eye on at once. The left side is a standard Centipede-esqe setup where you control a ship whose goal is to destroy enemies that are trying to cross from the top of the screen to the bottom. The bright side is that this ship is invulnerable, so you don’t have to worry about it being destroyed. You can sit right in the path of enemies without fear of death. This allows you to be more bold with your defensive moves. Any enemies that make it to the bottom of the screen end up transporting to the right section of the split-screen. 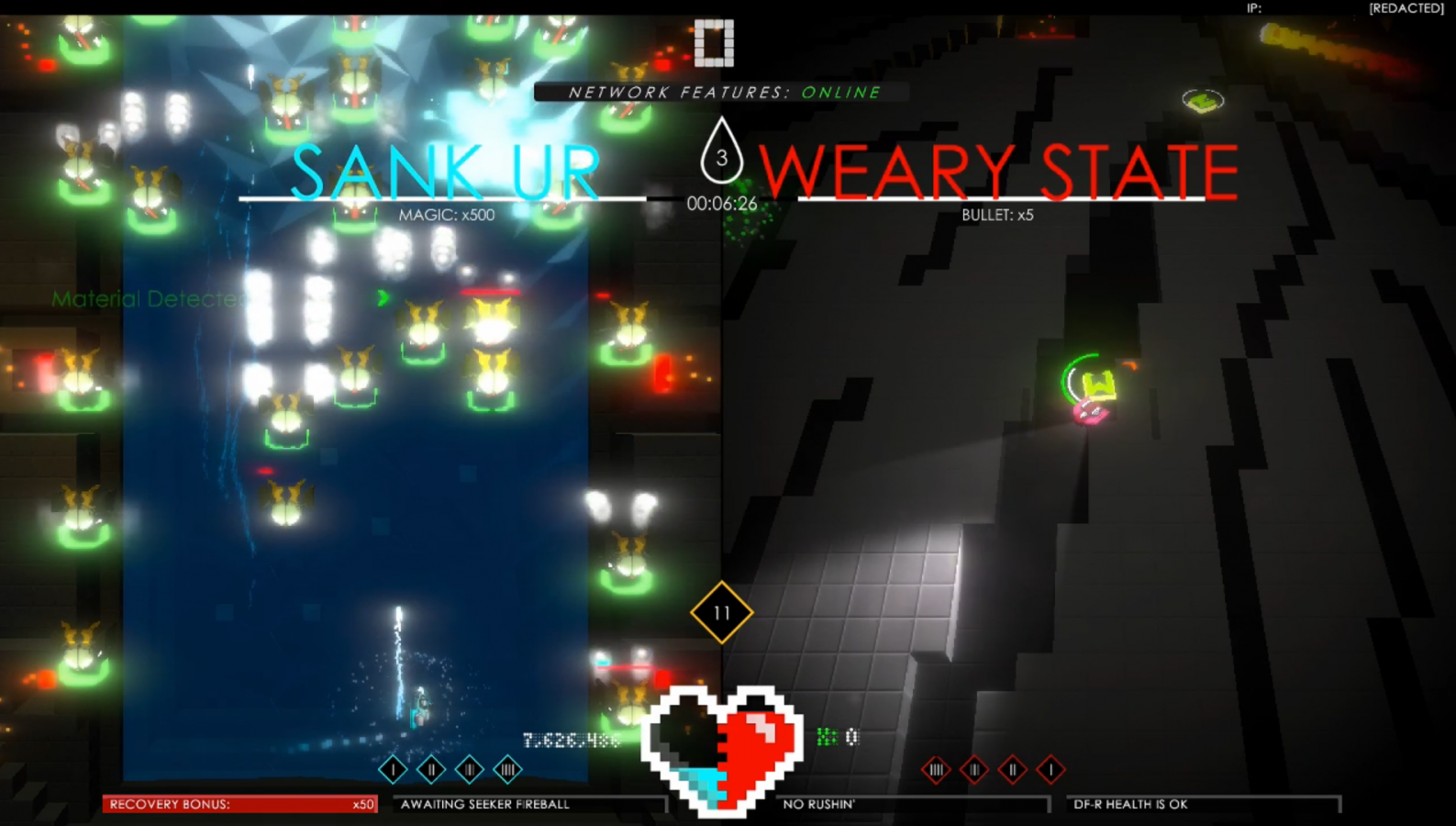 The right section is a top-down setup where you control a ship trying to collect parts and materials while avoiding fireballs and enemies. Unlike the left ship, this ship has limited health and can be destroyed. Losing this ship ends your run, so be careful. The right ship doesn’t have weapons, but it does have a special move that I’ll come back to. The right screen is a decently sized area surrounded by a square of fire and filled with lava pits that occasionally launch fireballs in random directions. Your ship is given directional arrows to show you where to find parts and materials. In order to collect parts and materials, you need to stop on top of them and wait for a circle to fill up. Once you’ve collected twelve parts, you are given button prompts that allow you to perform an extraction and finish the level. If you’d rather stick around to boost your score first, then you can do that as well.

Besides the extraction, parts are important if you want to be able to activate the B.F.P., which is a sonic blast that the right ship can activate in order to destroy all enemies and hazards within a certain radius. Using this blast costs parts, with the cost varying depending on the situation. If you use it to protect yourself from enemies, then it costs three parts, but if you use it to stop the Rushin’ Firewall, then it costs one part. Every four minutes, the aforementioned square of fire, known as the Rushin’ Firewall, rapidly closes in on the center of the right screen. The center of that screen has a square called the Safe Space. In order to push back the firewall, you need to enter the Safe Space and activate the B.F.P. as the firewall gets really close. Doing so will open up the area to explore once again until another four minutes have passed and the process repeats. The Safe Space is also useful because no enemies or hazards can pass through it; in fact, they are destroyed as soon as they make contact with the invisible barrier. At the same time, you can’t stay in the Safe Space too long because the longer you’re in there, the more a meter fills up. If that meter fills up all the way, then the Rushin’ Firewall is triggered early and you have to push it back. This is a nice way to prevent players from trying to hide away in the Safe Space for too long. 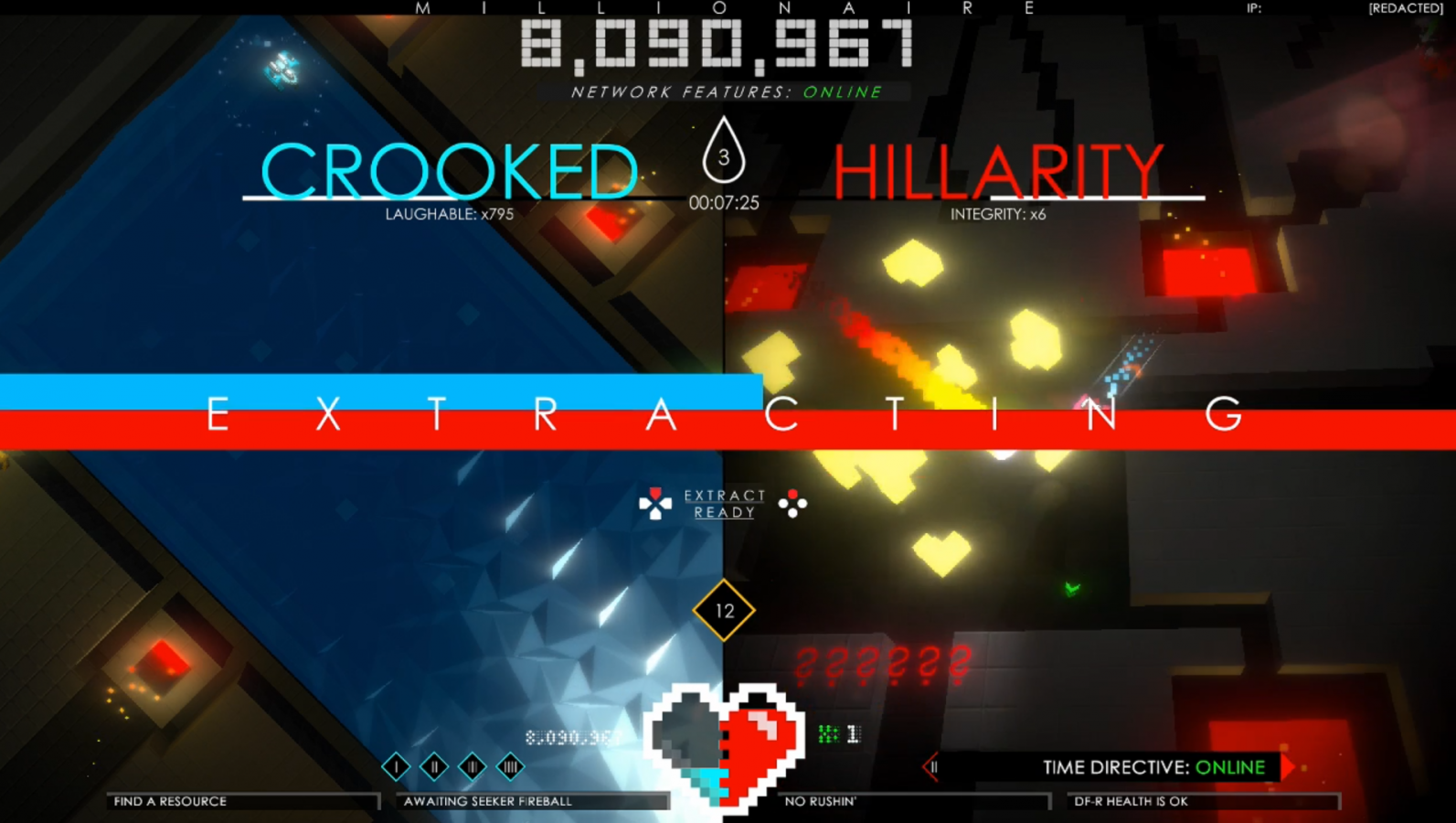 Separate from the parts, the right ship also collects materials. Materials are necessary to refill the energy for the left ship’s weapons. The left ship starts with basic laser bullets, but as you collect upgrade packs that occasionally drift down the screen alongside enemies, you gain access to upgraded attacks. As new enemy types appear, you’ll unlock different attacks you can use to defeat them. You can only destroy new enemy types with specific attacks, so you have to remember which ones to use on which enemy. For example, the sentries that post up near the bottom of the screen can only be killed with the scattershot, while the glowing mist enemies near the top can only be wiped out with missiles. You can hit them with other attacks, but they’ll just shrug them off and cause you to lose some of your score. If you let your energy completely run out, the left screen fades to black and you must collect four parts in order to reboot that side. In other words, stock up on materials and keep your energy from running out at all costs.

There’s no story to the game, but the point is to accumulate the highest score possible. There aren’t necessarily different levels, but there are three different tears. No that’s not a typo, that’s how the game spells it. I believe that it’s supposed to be a play on the player wanting to cry from the challenge, but who can say for sure? The higher tear that you play on, the more challenging it will be. This comes from more enemy types appearing and if you’re on tear 3, then you also have gameplay functionality changes. On tear 3, the game will periodically throw extra challenges at you in order to make things harder for a limited time. It will warn you shortly ahead of time with a phrase, and each phrase correlates to a specific effect. For example, Himversion and InHersion invert the controls of the left or right ship respectively. Death Sentence puts your right ship in a critical state, causing you to be extra careful for a short while. My least favorite was PictuHer in PictuHer, where the right side expands to take over the whole screen, while the left side minimizes into a small screen in the bottom right corner. Both sections function as normal during this time, but it’s hard to focus on the tiny screen. I appreciate the challenge, but it was the hardest and most annoying aspect of the game to me. 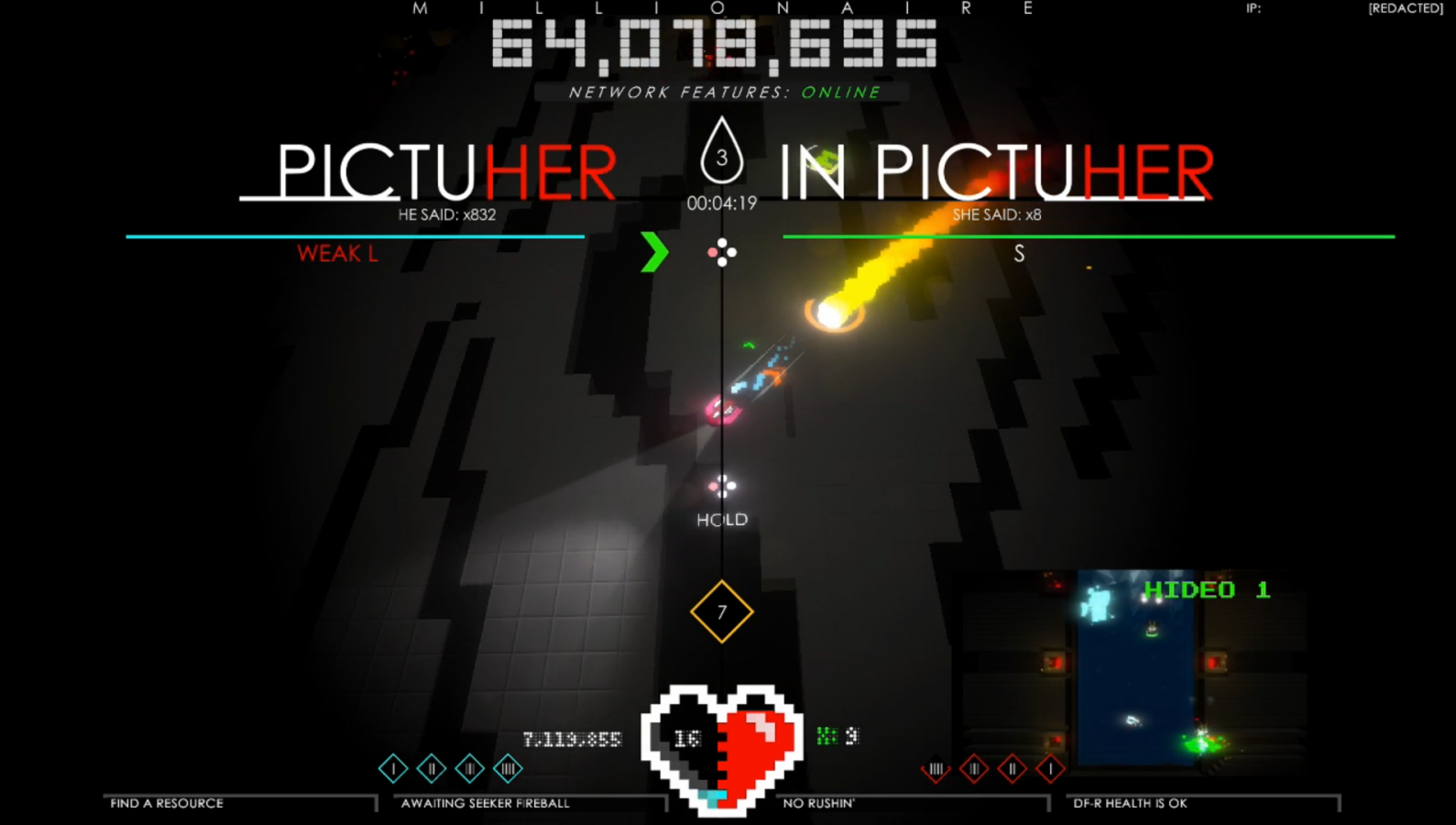 Now, the gameplay was challenging, but that’s most of the fun. Testing your hand-eye coordination and ability to multitask is something some gamers love to do, and I’m no exception. It’s tough to figure out at first, but once you’ve gone through a few runs, it’s not too difficult to control both ships at the same time. Visually, the game looks good and I like how different both sides of the split-screen looked. They looked like they were in completely different areas, but it was cool knowing that they both affected each other with their actions. As a whole, the premise of the game works really well. It’s not something that we normally see, but it’s definitely a refreshing take on the split-screen formula. If you like multi-tasking and aiming for high scores, then A Duel Hand Disaster: Trackher is a good choice for you.

A Duel Hand Disaster: Trackher is a unique twist on the standard split-screen formula, offering players a chance to solo the experience. Testing your multi-tasking skills is great, although it may be too hard for some people. The separate yet connected gameplay design kept me engaged, even if some of the extra challenges were a pain to deal with.

Codi loves to play video games and watch movies. He will watch almost any kind of movie just to experience them. His ideas take inspiration from the shows and movies he watches, and games he plays. He also loves a good pun.
Related Articles: A Duel Hand Disaster: Trackher
Share
Tweet
Share
Submit