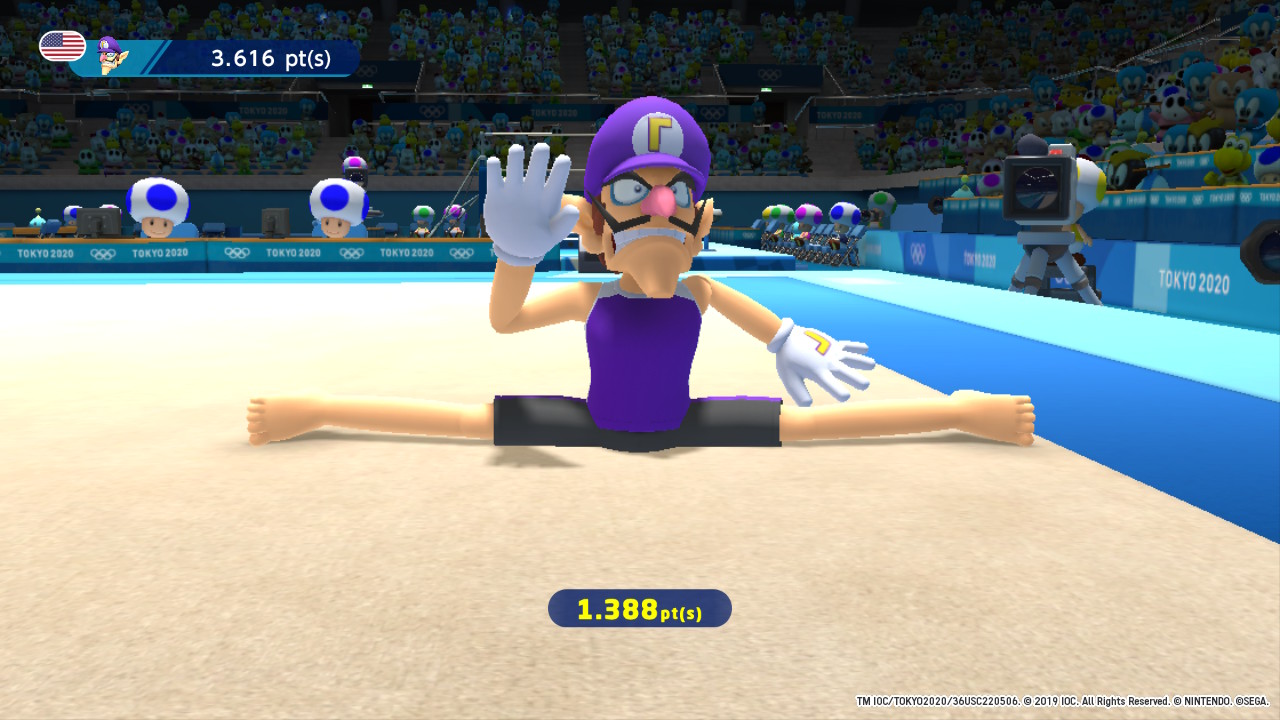 When you play a minigame collection, what do you expect? Two or three minigames that are actually good, a bad story mode, and an afternoon of making fun of the game with your friends? These kinds of games have gotten a bad rap ever since the shovelware days of the Wii, even the Mario Party series wasn’t immune to a drop in quality. Thankfully, those days are (mostly) behind us; minigame collections aren’t as prevalent, or at least I’ve seen fewer of them appearing on the eShop. The Olympics are next year and that means another collaboration between Nintendo and Sega in the form of a new entry of Mario & Sonic at the Olympic Games. This time they’re heading to Tokyo, both companies’ home turf. So how does their 2020 competition fare? Is it just another minigame collection, or something more?

Mario & Sonic at the Olympic Games Tokyo 2020 has a story mode. I normally don’t expect a good or even well-written story from games that don’t highlight them, but I was pleasantly surprised by this game. Eggman and Bowser have devised a plan to trap Sonic and Mario in a video game modeled after the 1964 Olympics, which also took place in Tokyo. After Luigi takes the console and turns it on, Eggman, Sonic, Bowser, and Mario all get sucked into the game and must win a gold medal in every event to escape while Luigi and Co. try to help from the outside. It’s not going to win any writing awards, but as a childhood fan of both franchises it’s fun to see all of these characters interact. As the story guides you through each of the minigames, you’ll unlock a new character to play as in some of them, such as Toadette in the 100-meter dash or Espio in the triple jump. While it is disappointing not being able to play as these characters in other events, it is understandable that you can’t as it would be quite a lot of work to animate and voice every character for every single event—the roster is still fairly sizable without them. I’m just glad I can pit Blaze the Cat and Waluigi against each other in a boxing match. 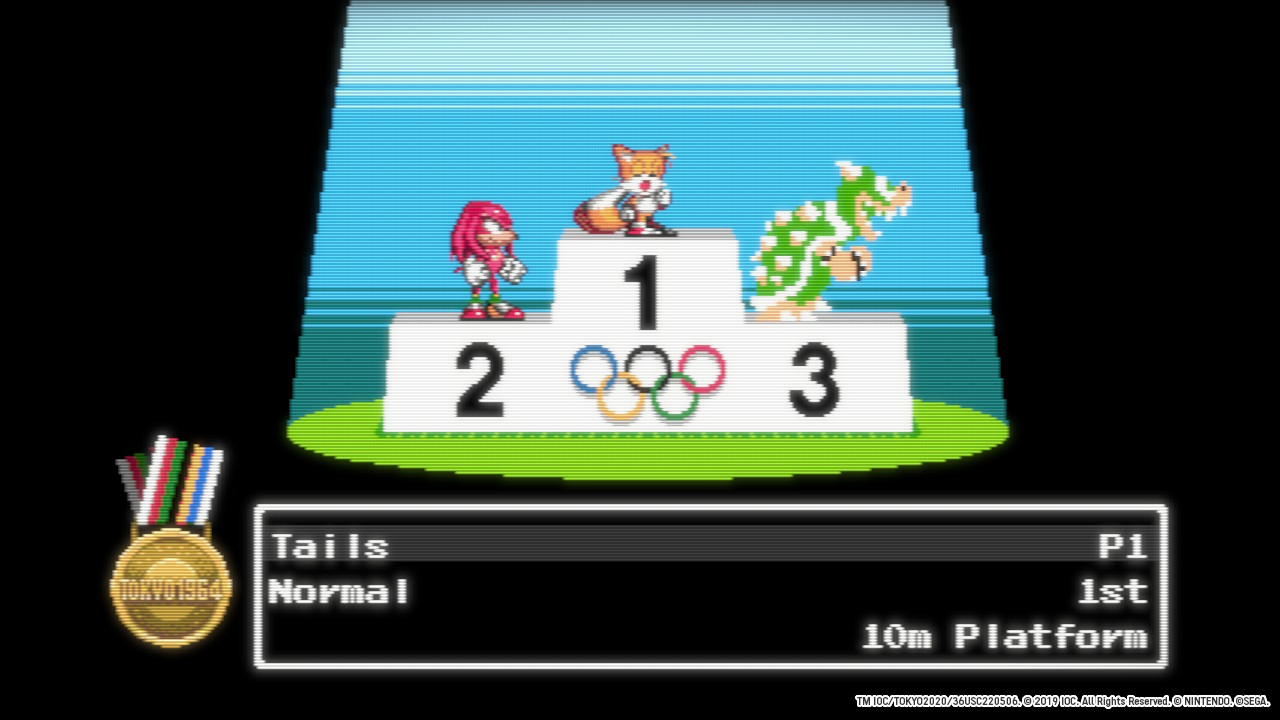 The minigames are split up into two categories: Modern and Retro events. The modern events are your standard 3D affair, while the retro events are inspired by the NES and Genesis era of games as well as the 1964 Olympics. Retro events use some nice sprite work too, backgrounds look like a medium between 8 and 16 bit, so all of the original sprites from Mario and Sonic’s games don’t feel out of place. The Retro events use a simplified control scheme, only using one to two buttons, which harkens back to the original games. It’s a nice touch, but it leaves these minigames feeling less involved than their counterparts. In addition, you can only play them with one to two players locally (I was not able to test online play for this review) which feels like a missed opportunity. While it is cool to see the Olympics represented in this manner, I was more drawn to the modern events.

Of the over thirty Mario & Sonic 2020 has to offer, there was only one I actively disliked: discus throw. In my many attempts at the event, I still haven’t been able to grasp what I’m supposed to be doing control wise. It’s also one of the few minigames that force you to use motion controls, even when selecting buttons only mode. It’s not too big of a problem, considering the wealth of other, better minigames, but it would have been nice to have a minigame collection without a stinker among them. The rest of the minigames have a surprising amount of depth to them, granted this partially comes from extra actions you can perform which you only learn about through tips after finishing a minigame, but I felt compelled to play each one repeatedly to stand a chance against my AI opponents on the hardest difficulty or beat the real life Olympic record for each event. While every minigame is fun, save for the aforementioned discus, the dream events are still a treat in their own right. You can run around an arena shooting targets, participate in four-way boxing, and race through a city on a hoverboard (my personal favorite, and as of writing I’m second on the online leaderboards). I wasn’t a huge fan of the dream boxing event and most people will probably find these three to be the best part of the package, but the rest of the minigames are still no slouches. I even enjoyed some of them more than the games featured in Super Mario Party. 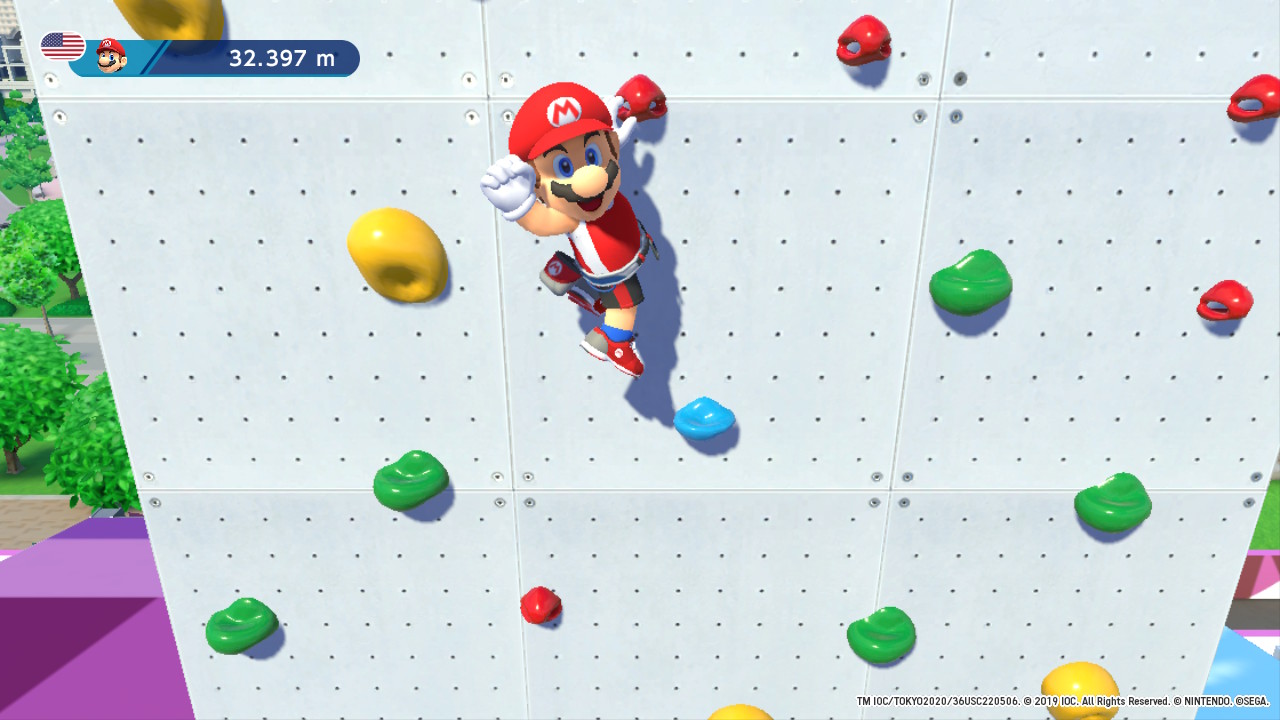 Local multiplayer is about what you would expect, it’s chaotic fun where no one really knows what’s going on. The controls are simple enough that even people who have never played before can win a few events, but take practice to fully understand and subsequently master. Unfortunately, with the split screen, parts of the UI can become virtually impossible to see.The gymnastics minigame in particular was almost unplayable, with button prompts and the balance meter being extremely small. Still, this is a fun game to just whip out and play a few events either with friends or alone. The portable mode is especially nice as the game doesn’t consume too much battery and minigames are short enough to be well suited to playing in short bursts.

Mario & Sonic at the Olympic Games Tokyo 2020 is a surprisingly competent minigame collection with a decent story. Where most in the genre would become repetitive after just a few rounds, this entry in the series incentivises replaying again and again to beat official Olympic records or the tough as nails AI. Either alone or with friends, it’s a great time.

David is the kind of person to wear his heart on his sleeve. He can find positives in anything, like this is a person who loved Star Fox Zero to death. You’ll see him playing all kinds of games: AAAs, Indies, game jam games, games of all genres, and writing about them! Here. On this website. When not writing or playing games, you can find David making music, games, or enjoying a good book. David’s favorite games include NieR: Automata, Mother 3, and Gravity Rush.
Related Articles: Mario & Sonic at the Olympic Games Tokyo 2020
Share
Tweet
Share
Submit