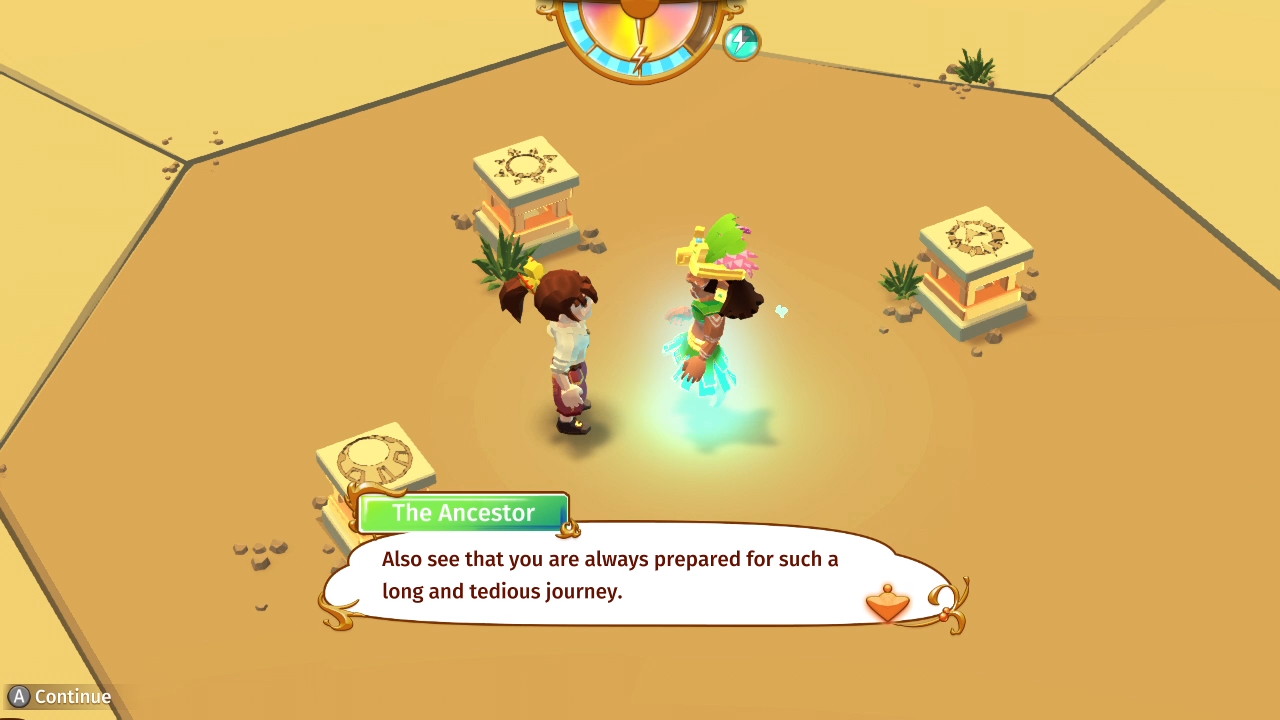 The best thing I can say about Stranded Sails – Explorers of the Cursed Islands is that it is a functioning piece of software, for the most part. In my time with the game it never crashed. It also has some decent music; nothing special, but it is serviceable. In concept, the game sounds promising: mashing The Legend of Zelda and Stardew Valley together could, in theory, create a game I would love. But Stranded Sails fails to deliver on almost every single front.

The game presents itself in a low-poly art style. Usually I like this kind of art direction. When done well, it can look like a higher resolution PlayStation 1 game: All of the nostalgia with none of the blurry textures. But in Stranded Sails, the character models look like knockoff LEGOs and the environments seem like slightly altered stock assets. The menus and the interface feel over designed; the quick select for tools, seeds, and food look nice but are confusingly laid out; and while it does work in the most literal sense, they are difficult to navigate and understand. For example, when attempting to cook a recipe you don’t know yet, you’re tasked with placing the needed ingredients in the correct slot. The game will notify you when one of the ingredients is correctly placed, in the wrong spot, or doesn’t belong in the recipe. However, it is extremely difficult to tell which of these symbols applies to which ingredient because, while the ingredients are placed in a plus sign pattern, the right and wrong symbols are just placed in a straight left to right order and it’s impossible to tell what symbols apply to which parts of the grid. Multiple times the game told me an ingredient was in the right place but when trying to cook again with the exact same configuration it would tell me that they were actually all wrong. 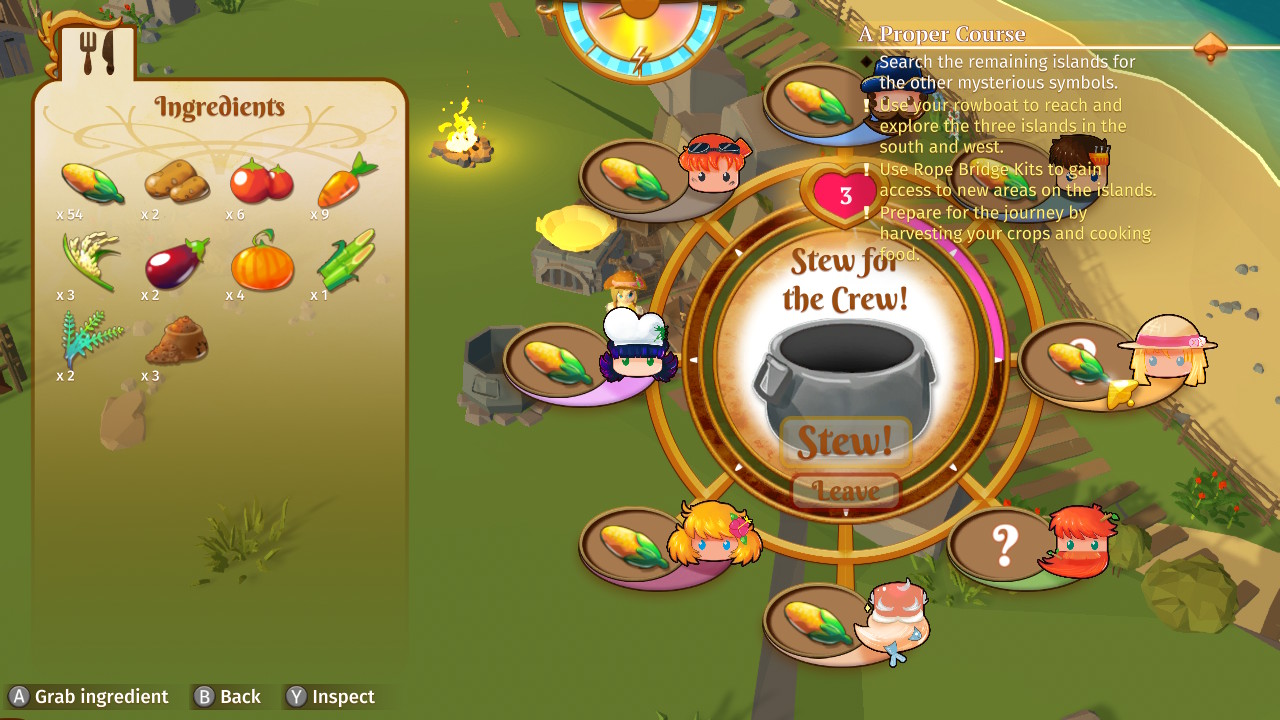 The farming portion of this part farming simulator is completely pointless. You have a small grid to plant seeds and grow crops in, and a small source of pure water to water said crops with a few feet away (you can later build another water source even closer to your farm, for some reason, even though it saves no time or effort). Everything grows pretty quickly, sometimes plants bear fruit within the same day you plant them though they, supposedly, may also need to be watered multiple times in the same day. As a test, I stopped watering all of my crops for a few days. You know what happened? Absolutely nothing – they kept growing and producing fruit and vegetables. This led to the realization that there are no consequences in this game. Don’t water your crops? Forget to feed your fellow castaways? Pass out in the middle of a fight with ghost pirates? You lose nothing. It’s ok for games to be easy, I’ve enjoyed my share of visual novels and Kirby games, but I think a game about surviving on a cursed island should have at least something happen if you stop trying to survive.

Your crew members are all extremely bland and speak in poorly worded exposition. They’ll ask you to do everything and anything for them, including building their houses and preparing their meals. Supposedly they all have skills, such as fishing, cooking, or smithing, but rather than help you they pass on every small task to you; spouting catchphrases they think suffice for a personality. 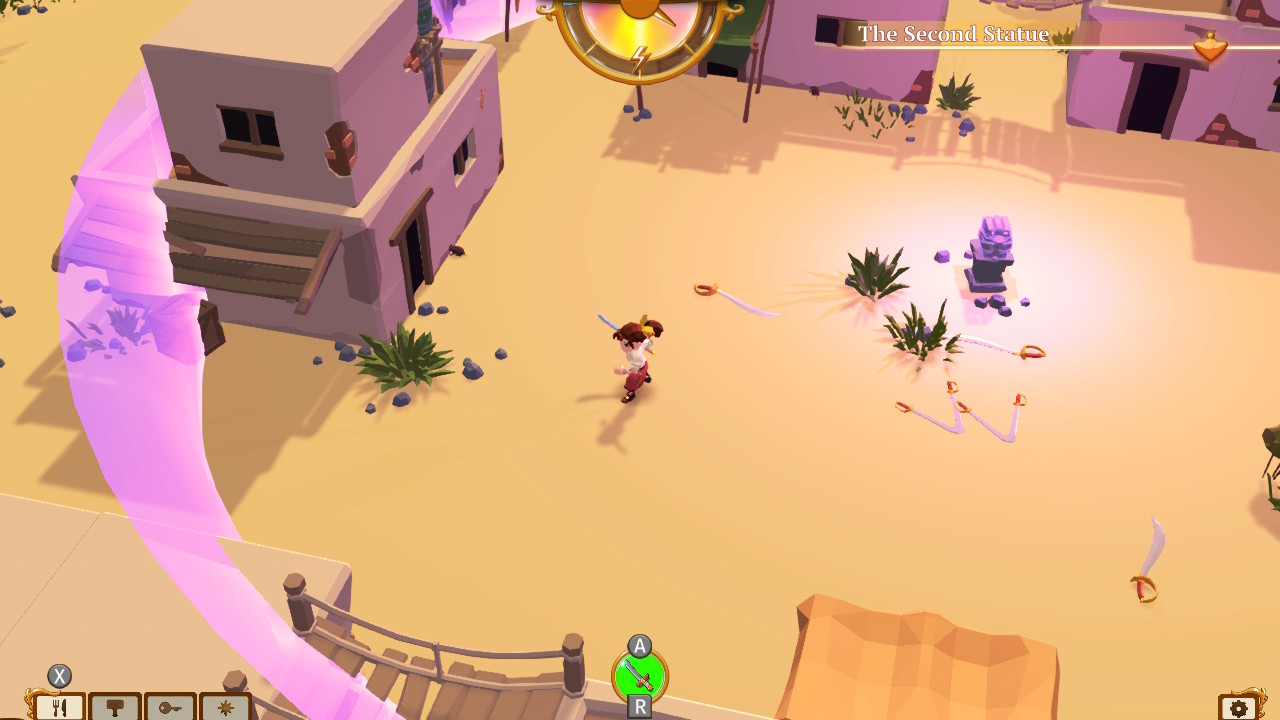 Arguably the worst part of Stranded Sails is the stamina system. At the top of the screen looms a striped, half-circle bar representing your character’s energy. Doing almost anything, from walking to chopping down trees, depletes this bar while eating or sleeping refills it. You read that right, WALKING reduces stamina. Apart from the pitiful combat system which you gain access to after a few hours and consists only of mashing the A button, your own stamina is what you will be fighting against. You can cook food to take with you and replenish your energy while sailing about, but most recipes barely restore anything and you’ll use those up just getting to the other islands, so you’ll constantly be teleporting back to camp, making more food, and setting out again for your next pointless task. If you run out of stamina, you pass out and awaken next to your bed. It’s not much of a punishment, since you can just get back in bed to fill up on stamina again with no consequence, but this is when Stranded Sails completely breaks down. In the first few minutes of starting the game, you’re tasked with finding some supplies around the island, including a pot to cook in. You collect these items by interacting with their 3D model, then walking over their 2D picture that jumps out. The first time I tried, my character passed out on the way to the picture. No big deal, I’ll just walk over and pick it up again, right? Wrong. Both the model and picture of the pot had despawned and I could no longer progress in the story and had to start a new game. This happened once again after spending about half a day completing each menial task the game threw at me when I ran out of stamina swinging my sword at some ghosts on the final island. I sailed back to the encounter, defeated the ghosts this time, and the forcefield surrounding the combat area didn’t disappear. To progress with the plot, I would have to start over again and slog through another 7 hours of horrendous dialogue, fetch quests and what can barely be considered farming and combat.

Stranded Sails - Explorers of the Cursed Islands at its best feels soulless, and at its worst it doesn’t even function. If this is targeted towards young children, it’s an insult to their intelligence. This is easily one of the worst games I have ever played.

David is the kind of person to wear his heart on his sleeve. He can find positives in anything, like this is a person who loved Star Fox Zero to death. You’ll see him playing all kinds of games: AAAs, Indies, game jam games, games of all genres, and writing about them! Here. On this website. When not writing or playing games, you can find David making music, games, or enjoying a good book. David’s favorite games include NieR: Automata, Mother 3, and Gravity Rush.
Related Articles: Stranded Sails - Explorers of the Cursed Islands
Share
Tweet
Share
Submit