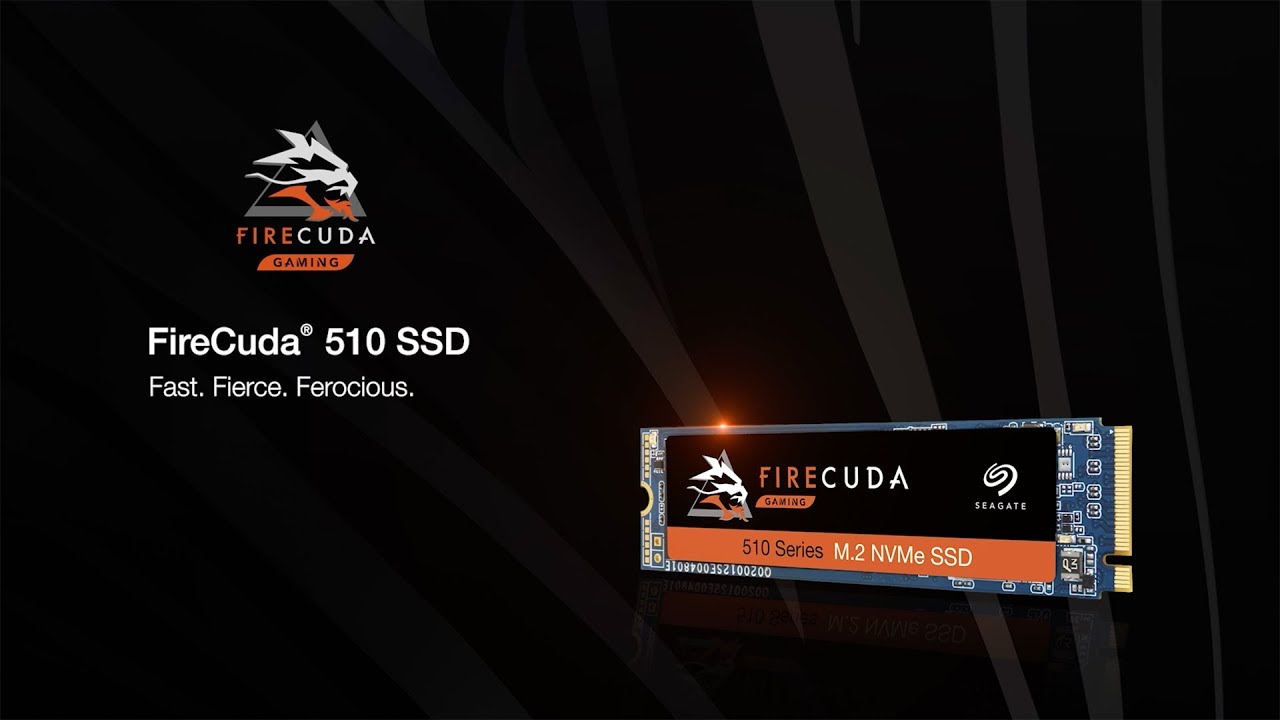 The evolution of storage in personal computers has been a slow march. Over the last two decades we’ve seen capacities grow from 8mb to a recently-revealed 16TB mechanical drive, but the SATA III interface still holds it back in terms of speed. The industry turned to SSDs and Hybrid SSDs which pushed read and write speeds by roughly 30%, have no moving parts, and are not susceptible to magnetic interference — a marked improvement over their mechanical counterparts. While 30% sounds good on paper, it doesn’t move the needle much in terms of real-world speeds. m.2 drives looked to change that, essentially delivering a “hard drive on a stick”, providing a new form factor that slots directly into the motherboard. The first M.2 drives delivered real-world write speeds of roughly 1300MB/s and 1000MB/s write speeds (copying from a pair of SSDs in RAID0 configuration, and writing directly to the drive). Newer generation m.2 drives have been slowly working their way into the mainstream of PC builds, and it’s time again for the next leap. 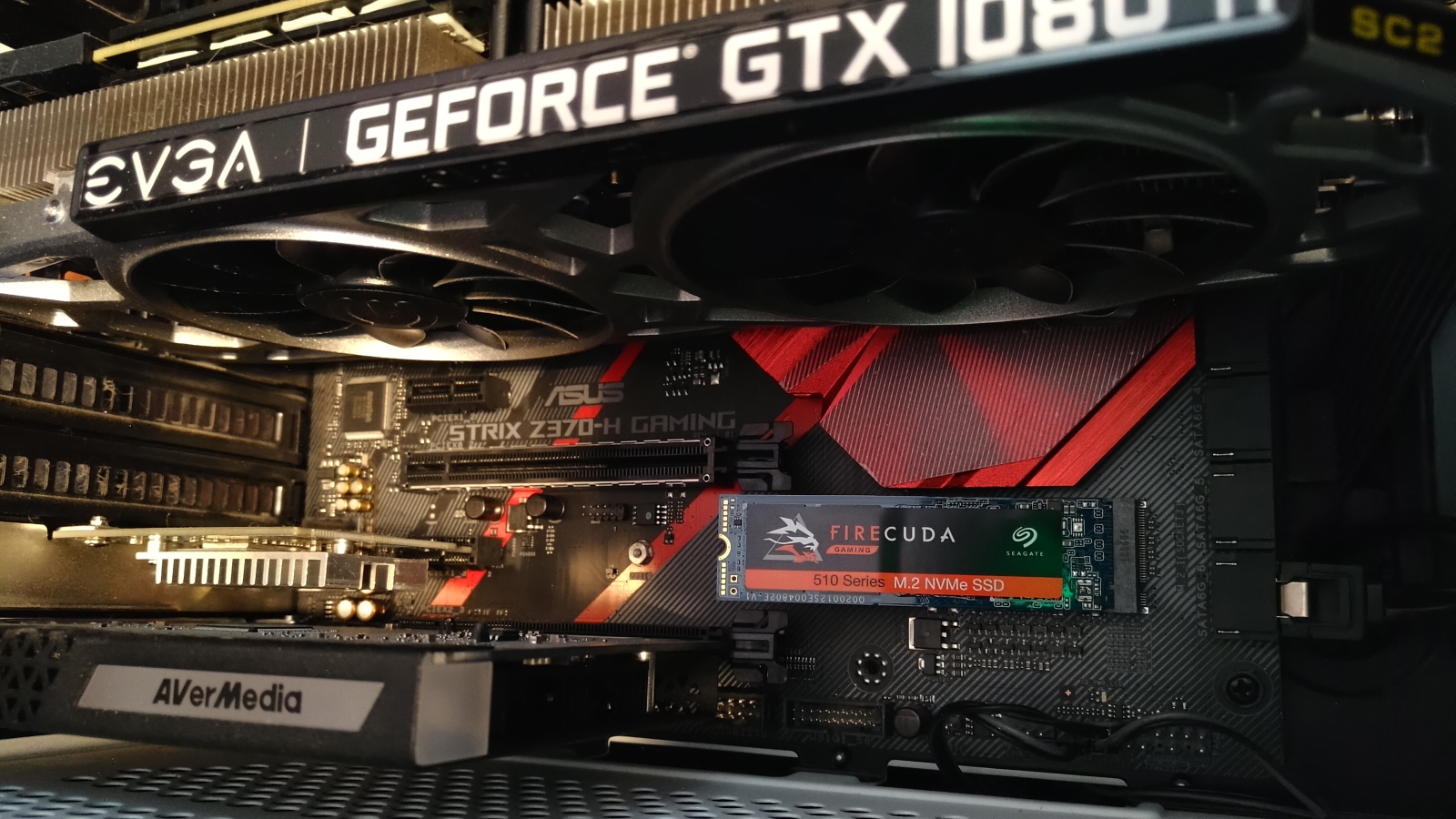 The installation is incredibly simple, as you might expect.

I’ve gotten my hands on Seagate’s newest NVMe M.2 drive — the FireCuda 510. This newest drive follows in the tradition of offering new features in a smaller form factor at even more eyebrow-raising speeds. This isn’t Seagate’s first foray into the M.2 SSD market. In fact, their previous drive, the Barracuda 510 M.2 SSD routinely comes up near the top of the list in any M.2 roundup. As they are both M.2 2280 double-sided form factor, and PCIe Gen3 ×4, NVMe 1.3 interface, you’d think they’d be similarly specced, but there’s some magic going on under the hood. The Barracuda 510 has max sequential read speeds of 3400MB/s, but a write speed of 2100MB/s. While those numbers are absolutely insane compared to any mechanical or SSD drive, there’s obviously room to grow that write number. Comparatively, the Seagate FireCuda is able to push the read speed up to 3450MB/s, but it’s the write speed that gets the attention. Delivering 3200MB/s, it almost has parity between read and write, and is, to my knowledge, the only M.2 drive delivering on that promise on the market. It’s time to pull out the hard drive testing tools and see what this baby can do. But first, here’s a video from Seagate with a dragon for some reason!

In addition to our usual bench of testing tools, I figured I’d do some comparisons with Seagate’s new hard drive testing suite, SeaTools. SeaTools has performance monitoring, of course, but it also will keep an eye on overall drive health, as well as ensuring you are always running the newest firmware for the drive — something I realized I’ve neglected with hard drives up until this point. Unfortunately, at this point, that’s the only thing that works for the FireCuda out of the tools. It’s likely that after the official launch we’ll see support for the basic scans and health checks. As such, I won’t get to compare speed scores from Seagate’s tools versus the ones I normally use. All of that aside, it’s time to see what the FireCuda 510 can do.

To put the drive through its paces, I figured I’d test load times on a few games, as well as a real-world copy from another NVMe and a mechanical drive, and finally the good old synthetic tests. On we go!

I pulled up two games at random and did some stopwatch load time comparisons. The first up was Dangerous Driving from Three Fields Entertainment, followed by Bethesda’s MMO, The Elder Scrolls Online. By way of comparison, I wanted to show the load times of Seagate’s own Barracuda 12TB mechanical hard drive (our review) versus this NVMe Firecuda 510 M.2 drive. It’s not entirely a fair comparison, per se, but it’s a very likely scenario to be running a mixed drive build, or looking to move games to something fast, and keeping your storage in the “cheap and deep”.

As you can see, the mechanical drive was able to load Dangerous Driving in 17 seconds, but the FireCuda 510 was able to deliver the goods in just 13 seconds flat. The Elder Scrolls Online saw less of an improvement, however, loading from the character select to being in-world in 18 seconds on the mechanical hard disk versus 15 for the FireCuda 510. I ran each test three times, with full reboots in between to ensure there was no caching in RAM and saw precisely the same results — both are remarkable in their consistency.

Moving on to the practical work, I pulled in a closer analog to the FireCuda 510 — specifically the Samsung SSD 960 EVO NVMe M.2. For these tests I decided to shuffle a 30 gig file between the Barracuda 12TB mechanical drive, the Samsung 960, and the Firecuda 510. 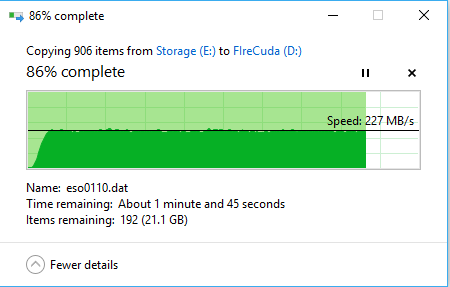 Copying from a mechanical hard drive to the FireCuda 510 is a slow going process, thanks to the source speed.

These new drives are so fast that Windows can’t even calculate the transfer estimate before that transfer is complete. Even SSDs are starting to look pedestrian by comparison.

The FireCuda 510 is so fast that Windows couldn’t even calculate the speed before 30 gigs was transferred.

Moving on to synthetic benchmarks, I swung out the ATTO Disk Benchmark. ATTO is a good test of a drive as it checks sequential read and write, providing a numerical value of what you might see with playing a video or playing most games. 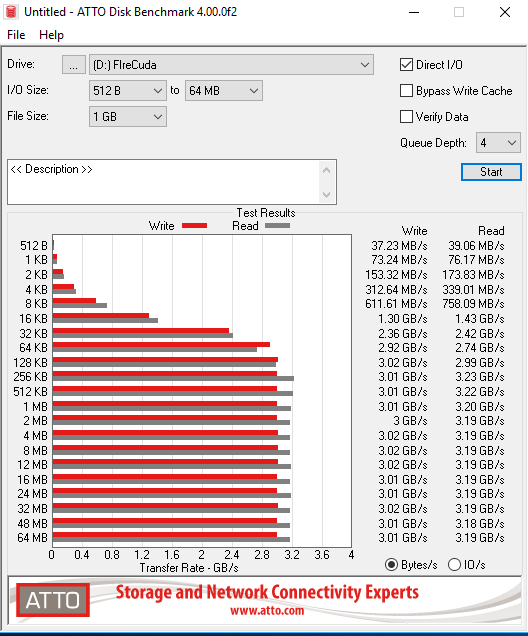 In addition to ATTO, I like to crack check results with CrystalMark as it checks sequential read and write, as well as random. It’s a more realistic look at what it’s like to have files scattered across the entire drive. It also does these reads while bypassing the caching mechanisms to show real speeds. Amazingly, not only does the FireCuda deliver on its theoretical speeds, it manages to give a little beyond. 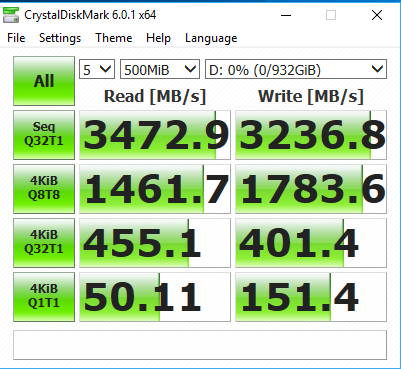 When compared to the 960 EVO, it’s clear that the FireCuda represents the next step for the M.2 drive space. The EVO routinely delivers 3000 MB/s of read speed, but only half of that in the write category. On the other hand, the FireCuda manages to hit the same read speeds, but with no slowdown on the write side of the world. It’s a significant step forward, but for who exactly?

As a gamer, the 510’s increase in write speed won’t likely have much of an impact on your world if you are already using an NVMe M.2 drive. If you are using a mechanical hard disk, an M.2 drive will revolutionize your entire gaming experience as it practically erases pop-ins and cuts load times significantly. That said, if you do any capture and stream activities, or if you happen to encode video in Premiere Pro, this upgrade is a game changer. The additional write speeds took minutes off of complex renders, and when your PC is entirely consumed for that activity, any time reclaimed is gold.

One of the best things about the Seagate FireCuda M.2 is its warranty. Historically, SSDs and M.2 drives have had shorter warranties (1 or 3 years) despite having no moving parts. Seagate is bucking that trend by offering the same 5 year warranty they offer on all of their hard drive products. This gives me peace of mind that my data (or in this case, precious save files) will remain safe for the usable life of the drive.

Vast improvements in write speeds and shockingly consistent reads make this drive an affordable must-have for any gamer. Whether it’s your favorite MMO, or rendering footage to upload onto YouTube, the real-world performance and expanded warranty will keep you working at lightning speed for years to come.

Ron Burke is the Editor in Chief for Gaming Trend. Currently living in Fort Worth, Texas, Ron is an old-school gamer who enjoys CRPGs, action/adventure, platformers, music games, and has recently gotten into tabletop gaming. Ron is also a fourth degree black belt, with a Master's rank in Matsumura Seito Shōrin-ryū, Moo Duk Kwan Tang Soo Do, Universal Tang Soo Do Alliance, and International Tang Soo Do Federation. He also holds ranks in several other styles in his search to be a well-rounded fighter. Ron has been married to Gaming Trend Editor, Laura Burke, for 21 years. They have three dogs - Pazuzu (Irish Terrier), Atë, and Calliope (both Australian Kelpie/Pit Bull mixes).
Related Articles: Hardware, Seagate FireCuda 510
Share
Tweet
Share
Submit