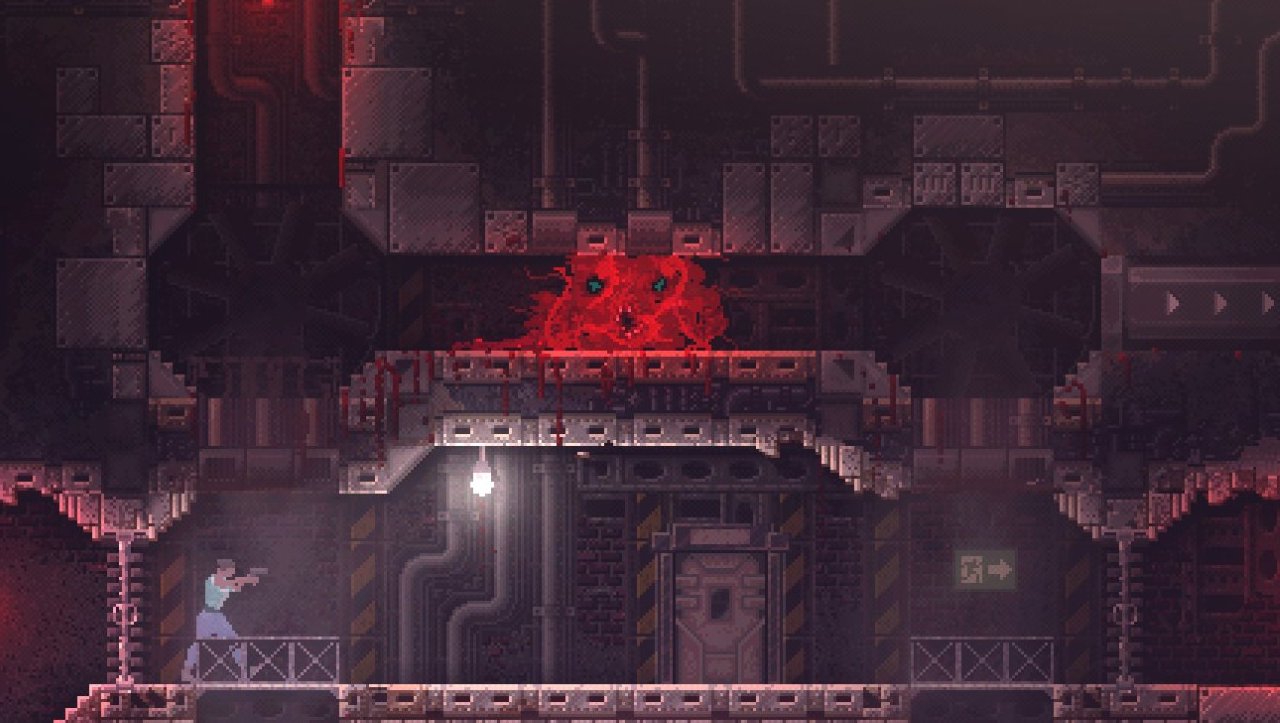 I like the idea of Carrion. A reverse horror game where you take control of the monster to terrify people? Yeah, that sounds great. It is a shame, then, that Carrion isn’t anything like that. It is more of a simple Metroidvania than anything else. It isn’t nearly as unique as I hoped and it is way too simple to hold my interest for very long.

I like the pixel art, but I just wish it wasn’t so repetitive. You spend most of the time surrounded by concrete as you move through tight corridors and vents. You do occasionally go outside, but this is usually just a path to get to the next area inside. Nothing stands out and everything starts to blend together after a while. I would have enjoyed some more interesting backgrounds and landmarks.

The environments aren’t the only thing that gets stale. Carrion’s gameplay can be summed up like this: crawl through a vent, grab some people with your tentacles, flip a switch, leave. Sometimes they mix it up by making me move an elevator before going through a vent. Riveting.

When you aren’t crawling through vents and murdering everyone you come across you will be solving puzzles. They are never very complicated and generally boil down to figuring out how to flip a switch you can’t reach. They are well designed and allow me to use all of my powers. My issue with these puzzles is how you use your powers. They are tied to the size of your monster and I hate this. This takes complete control away from the player and makes me needlessly backtrack since you can only shrink or grow in specific spots. You need to find some red pool of liquid to shrink and a safe spot to grow. These safe spots are generally just holes in the wall that you crawl into.

This is a real lost opportunity. It would be far more interesting if I had access to all the powers. It would add to the feeling of growing and becoming an unstoppable beast. Instead, you have to keep shifting size to get the specific power you need to progress. This makes everything super simple since you only ever have access to so many powers at a time. You grow to break stuff and use armor to not get blown up by bombs and you shrink to get access to a hook that can flip switches from a distance and turn invisible. You also have a mind control power so you can get other people to flip switches for you. 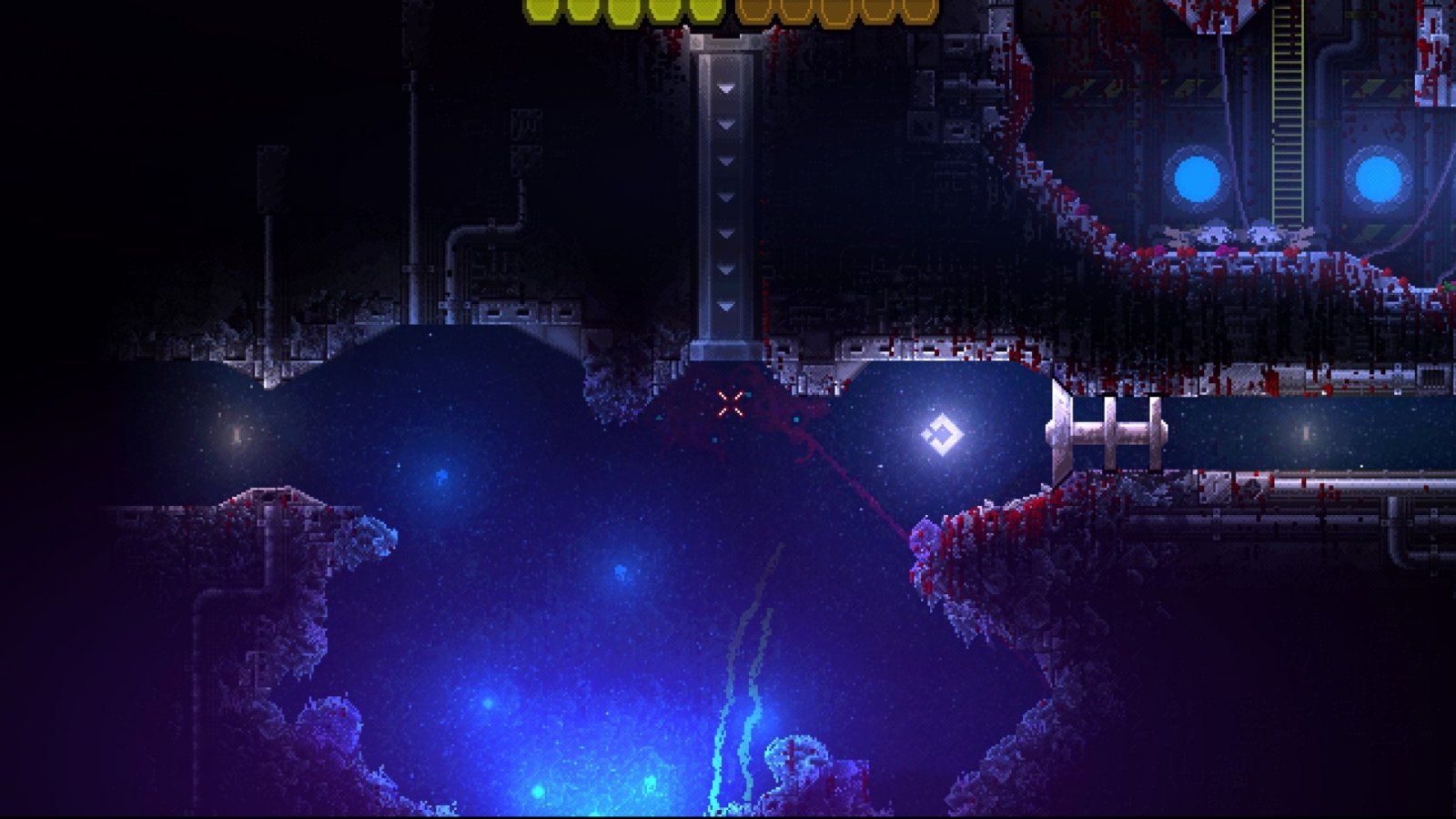 Secrets! There will be times you have to come back later once you unlock new powers.

The segmented abilities are holding Carrion back. Imagine if in Hollow Knight you couldn’t dash and wall jump. You needed to go to a station to switch out those abilities. It is incredibly and needlessly limiting. Instead of puzzles and combat situations getting more difficult the solution just slightly changes. Instead of turning invisible to pass through a trap, I grow hard skin to survive an explosion. It is an incredibly strange progression system and it doesn’t work at all.

The game also gets worse the bigger you get. At first, I enjoyed Carrion’s movement. You crawl along walls quickly and it was very satisfying to rip a grate out of a wall and quickly ambush a person. As you get bigger, however, you become increasingly difficult to control. You become this long, unwieldy beast that constantly switches directions when you don’t want to. It becomes frustrating in tight spaces even though that is a majority of the game. 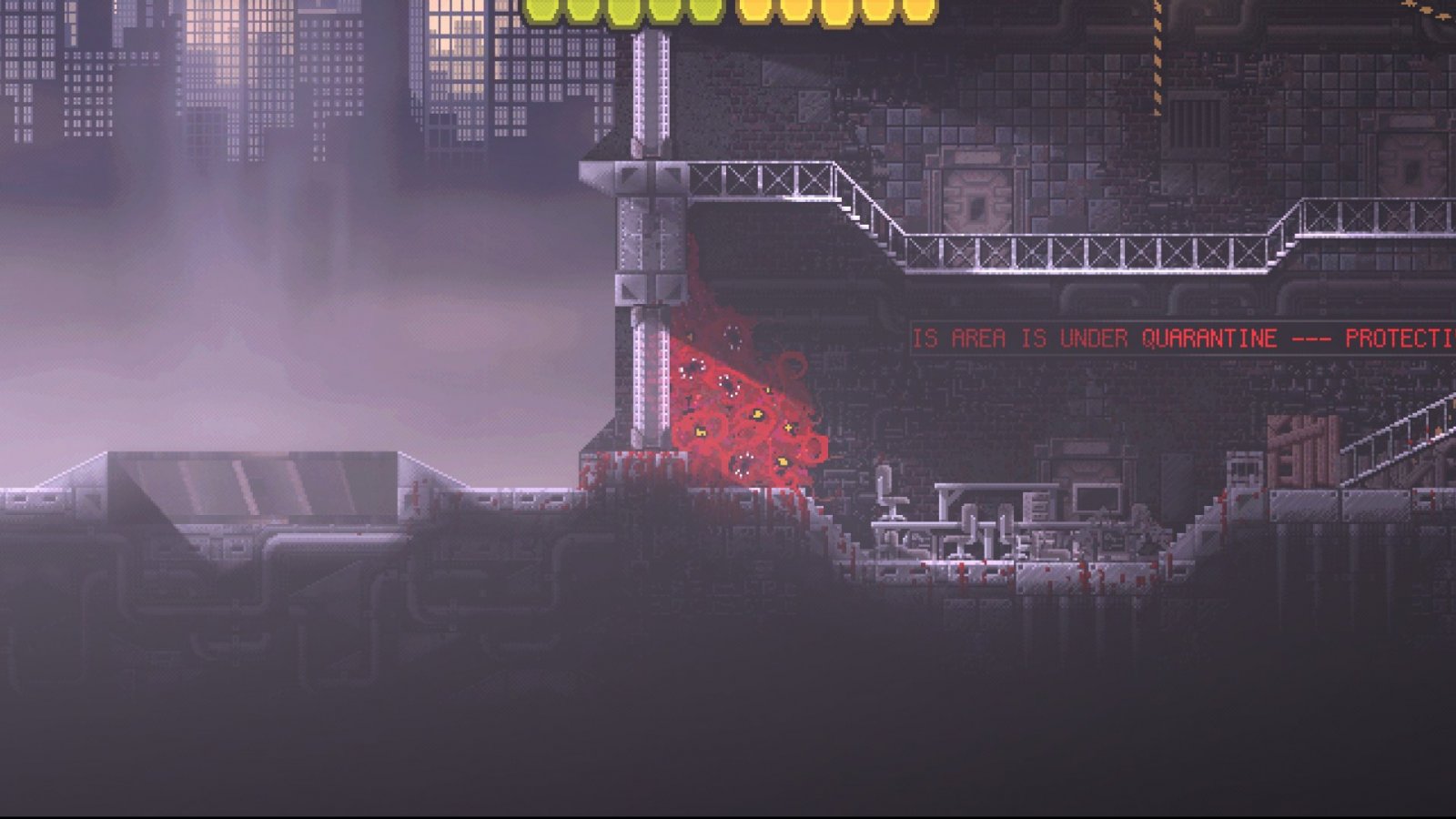 Freedom! So close yet so far away.

I called Carrion a Metroidvania, but it is a super simple one. The map is mostly linear but you can backtrack with new powers to get optional powers such as extra tentacles so you can grab multiple things at a time. That’s the extent of it. The main path through the game is very linear with little to explore.

The combat certainly isn’t a highlight. It boils down to grabbing an enemy and eating them or smashing them against a wall. They rarely require any of the powers you have to beat since they can’t tell which powers you will have access to at any given time so they can’t base encounters around them, only puzzles. People, people with guns, people with shields and guns, drones, people in mechs, and so on but it doesn’t matter. You just grab them and smash them.

There just isn’t a reason to play Carrion. There is little narrative, repetitive combat, limited puzzles, and almost zero horror elements. The atmosphere is okay and it reminds me of Alien but that’s about as far as it goes with horror. Just leave this monster stuck in the vent.

There just isn’t a reason to play Carrion. There is little narrative, repetitive combat, limited puzzles, and almost zero horror elements. The atmosphere is okay and it reminds me of Alien but that’s about as far as it goes with horror. Just leave this monster stuck in the vent.

Austin Fern has been playing video games his entire life. The first console he truly fell in love with is the PlayStation 2 with Sly Cooper, God of War, and many others really leaving an impression. He enjoys all genres of games from FarCry 5 to Danganronpa and everything in between.
Related Articles: Carrion
Share
Tweet
Share
Submit