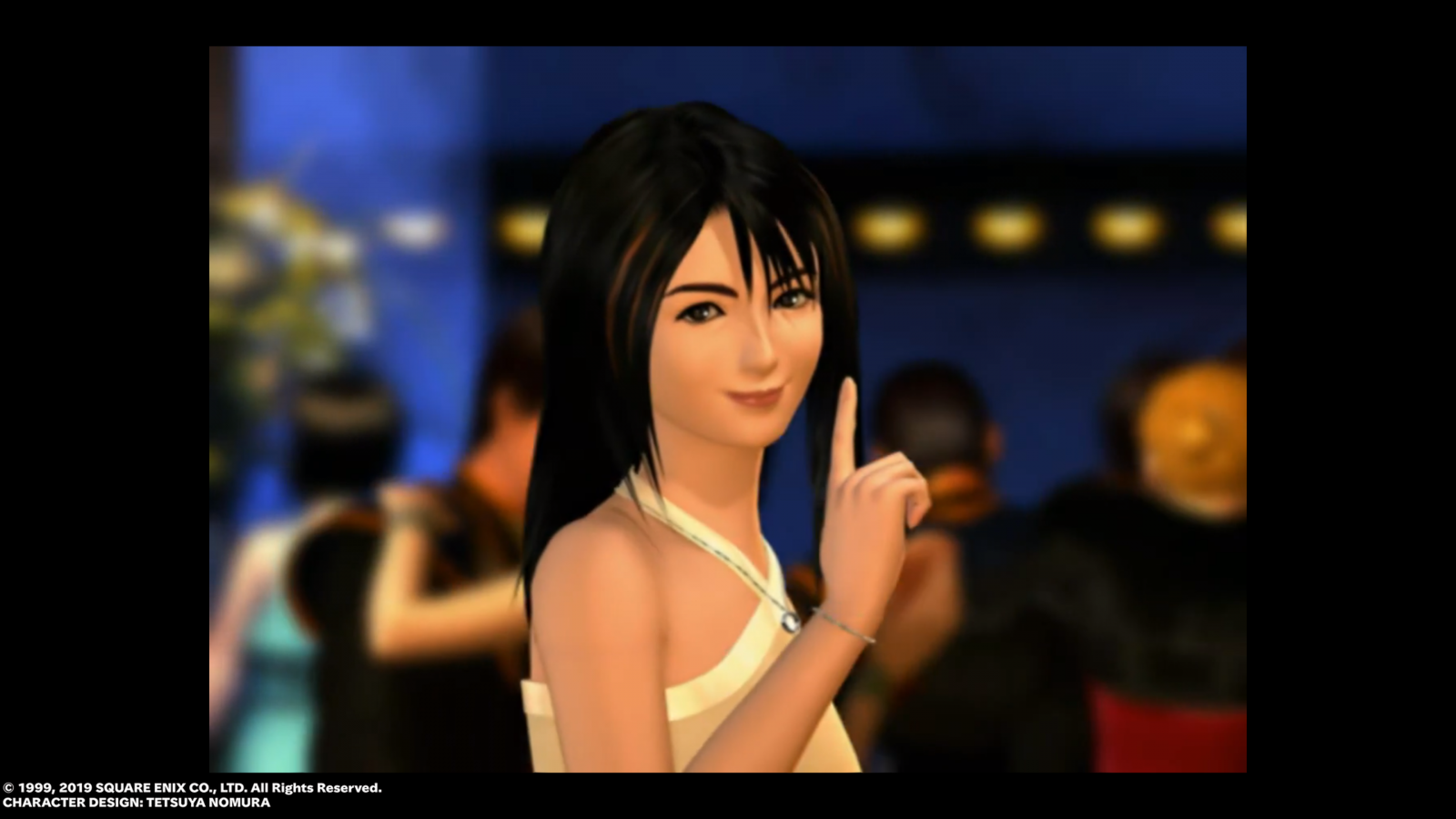 Final Fantasy VIII is a game about pressure. It’s constantly adding on things to keep track of: timers, new characters and plot developments, and new spells. In order to succeed, you’ll need to micromanage every single detail, from who joins you in combat to whether or not the cafeteria’s hot dogs are stored properly. But, try as you might, you can never account for everything; you’ll forget to clean out your magic inventory or put someone in the wrong place at the wrong time. Luckily, you can always count on your friends to pick up the slack, if you let them, that is. Final Fantasy VIII is a game about learning to rely on other people, for both the main character, Squall, and the player themselves.

It’s been 20 years since Final Fantasy VIII released in 1999, and to celebrate its anniversary SquareEnix and Dotemu have remastered the game for modern consoles and PCs. Well, I say remastered but, in reality, it’s partially been remade; the original’s source code has been lost to time. While it was praised in its time, FF8 has garnered a reputation among fans as the weird, emo entry in the series. It’s regarded as having a poorly written story and mechanics too complicated for its own good. While it does have its flaws, I think this game will resonate with audiences now more than ever.

In Final Fantasy VIII Remastered, you take up the Gunblade of Squall, a student at Balamb Garden training to become a SeeD. It’s basically a high school for kids to become mercenaries for hire. Before the game starts, Squall and his eternal rival, Seifer, injure each other while training, leaving matching friendship scars across their faces. A mysterious woman appears at Squall’s bedside in the infirmary, and before you know it, you’re off to take your final exam in a cave filled with lava. The plot moves very quickly, both to the game’s benefit and detriment. It keeps things interesting and can occasionally feel overwhelming, which serves to further connect the player to Squall. But as a result, some plot points are poorly set up, such as the revelations that come while the party talks on a destroyed basketball court. I won’t spoil anything in this review, but that specific plot point comes out of nowhere and really could have used at least a little foreshadowing for how important it ends up being. Though the focus of the story is mostly on Squall and how he gradually opens up to other people, I also wish there was more development for the other characters in your party. They all have a few moments, but they’re few and far between. Perhaps this is a testament to how much I liked the characters, that it feels like a missed opportunity that the game doesn’t allow you to get to know them more. 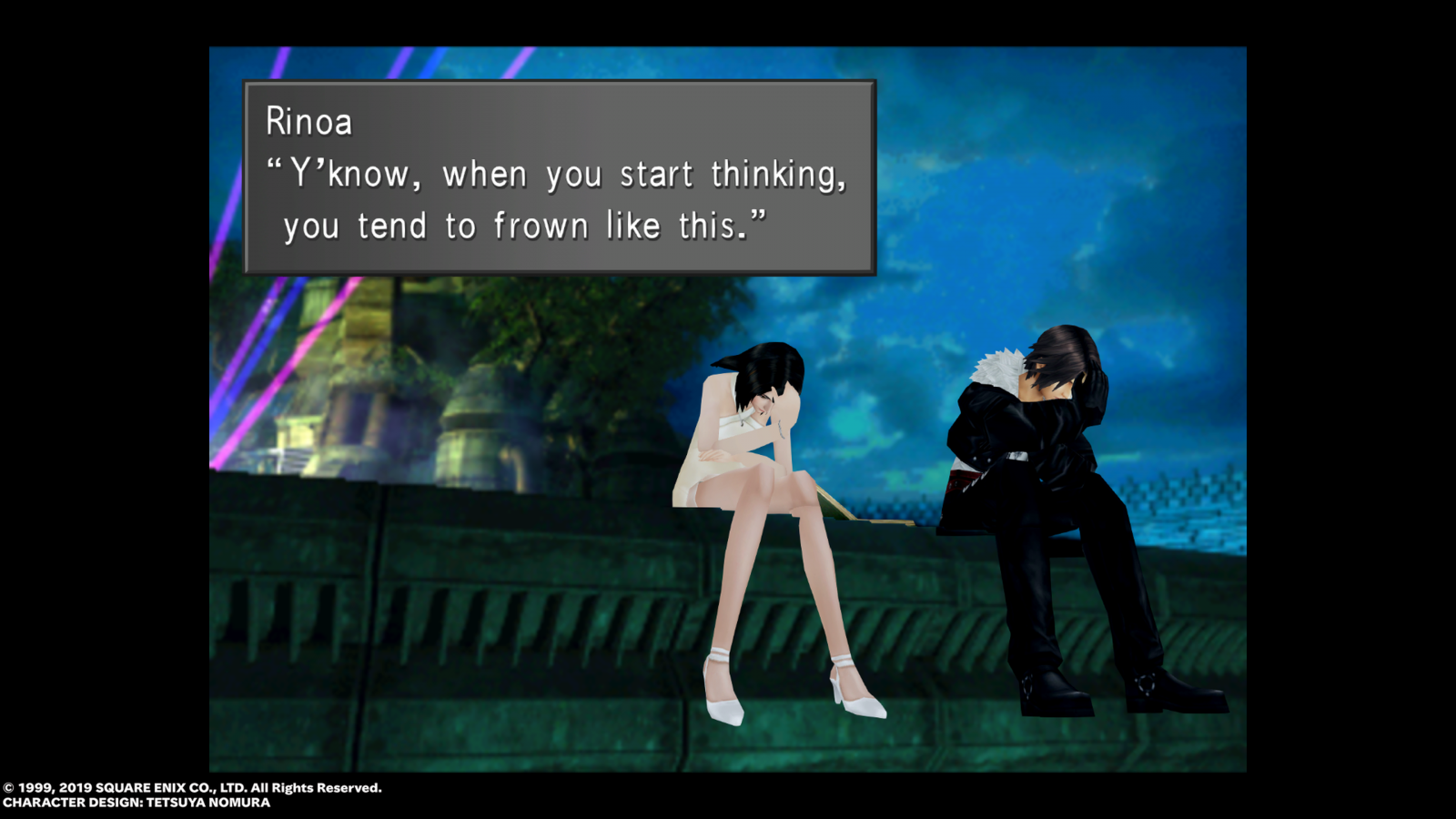 The game’s world is also amazingly realized in the pre-rendered backgrounds. There’s a ton of small details in each screen; that coupled with NPCs who don’t just talk about the main story makes the world feel alive and lived in. There’s also a lot of surprising mundanity to the world, which I really appreciated. Balamb Garden didn’t feel like some magical school where only the most gifted of students can succeed, it felt like home. You can go to the quad and see students playing guitar or staring out into the ocean, or try and get a hot dog while the lunch lady rambles on about her son. It’s all the little details that make a game’s world really come alive, and FF8 has those in spades.

The Active Time Battle, or ATB, system returns with some small additions this time around. As in previous entries, each party member has a bar that fills up during battle that, once full, allows them to take an action. What each character can do is determined by the Junction system, Final Fantasy VIII’s most divisive mechanic. Outside of battle, each party member can junction, or equip, Guardian Forces. Each GF allows whomever equips it to enhance certain stats by linking magic to them. For example, you can junction the magic spell Fire to Rinoa’s magic stat to raise it, or you can junction the same spell to her attacks to allow her basic attacks to deal fire damage. It’s an extremely complex system that can be a lot of fun to manage, but is poorly explained in the game’s lengthy tutorial. This is my third time attempting to play through the game and I’m only just starting to understand how to properly optimize my characters. 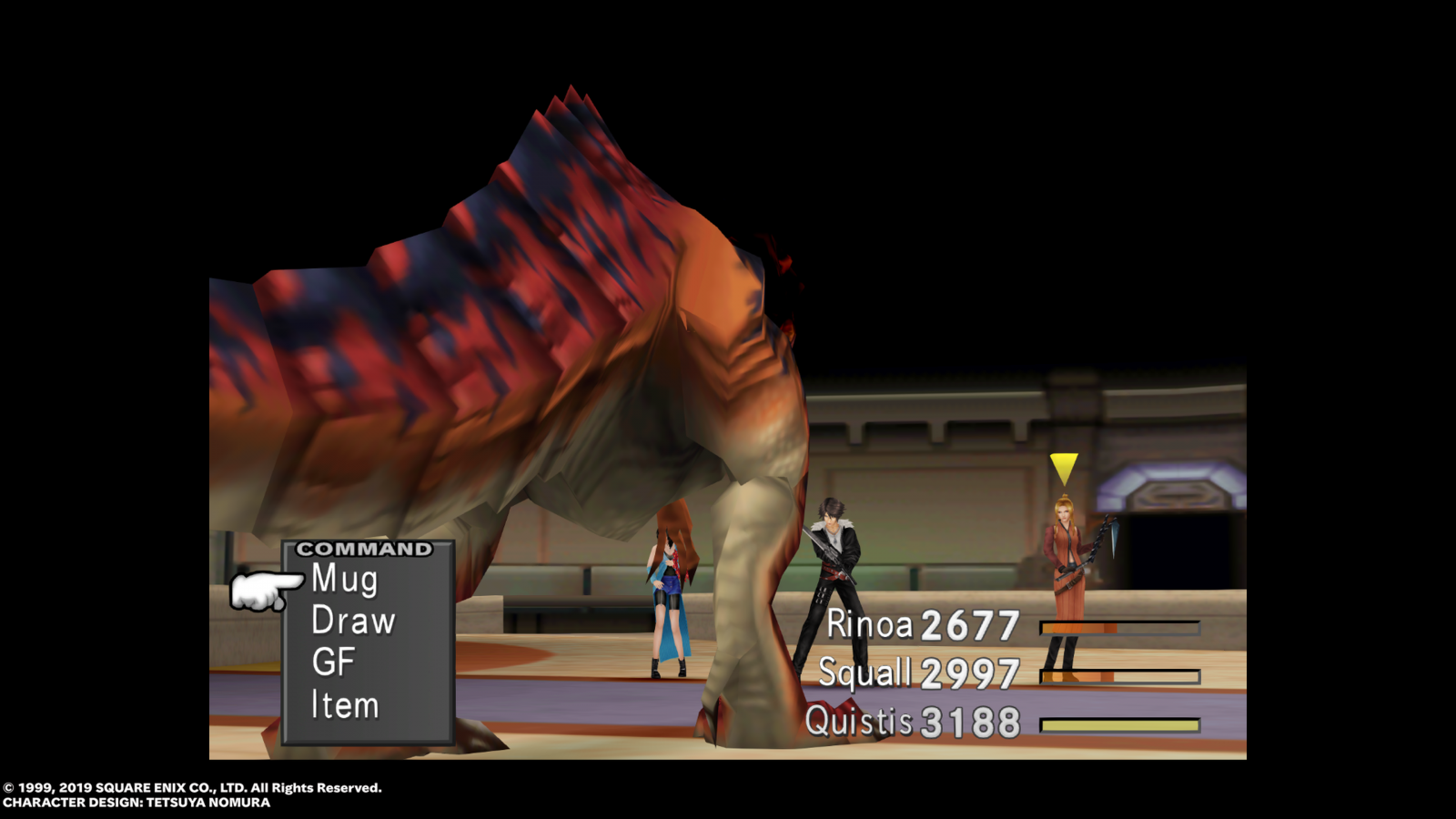 Feeding into the junction system are the magic and draw systems. Unlike previous entries, magic functions as an item; you have a limited inventory for spells and can hold up to 100 of a single spell. You get magic by using the draw command in battle. Each enemy has a selection of spells you can either stock for later or cast immediately. If you want to be as strong as you can, you’ll want 100 of each spell to junction to your characters, so you’ll have to draw 100 of each spell an enemy is carrying for each of your three party members in battle. This is where the game can get a bit tedious. In the original release, it would take a loooooong time to fill up on magic while waiting through animations and trying to keep your party alive. Thankfully, this remaster helps this process somewhat. You can speed up the game and become completely invincible just by pressing in the left and right sticks respectively. If you enable the memory cursor in the options as well, you can just hold the confirm button and watch them go. The whole drawing process takes a minute or so, so it’s a lot more bearable this time around. It’s still tedious, but much less so now. When first encountering a new enemy or boss, I would enable the 3x speed and invincibility at the beginning of battle to draw all the magic I needed, then disable both to actually fight them.

The junction system, while very fun to experiment with, does have one unintended side effect. With magic being a limited resource used to improve your stats, I was hesitant to actually start using a lot of my spells until about halfway through disc 2. Some of the more powerful spells like Triple, which lets you cast a single spell three times in one turn, I really wanted to use but didn’t since I had junctioned them to stats. However, using magic in creative ways can be a lot of fun, like casting Zombie on a foe then killing them instantly by casting Life, so I would encourage new players to go wild with magic, as long as it isn’t junctioned at the moment that is. Don’t feel pressured to hoard 100 of each spell, just use what you’ve got and you’ll find that you’re a lot more effective. While the magic and junction systems can feel a bit at odds at times, I’d still love to see an improved version appear in a newer entry since I still had so much fun just messing with it in this flawed implementation. 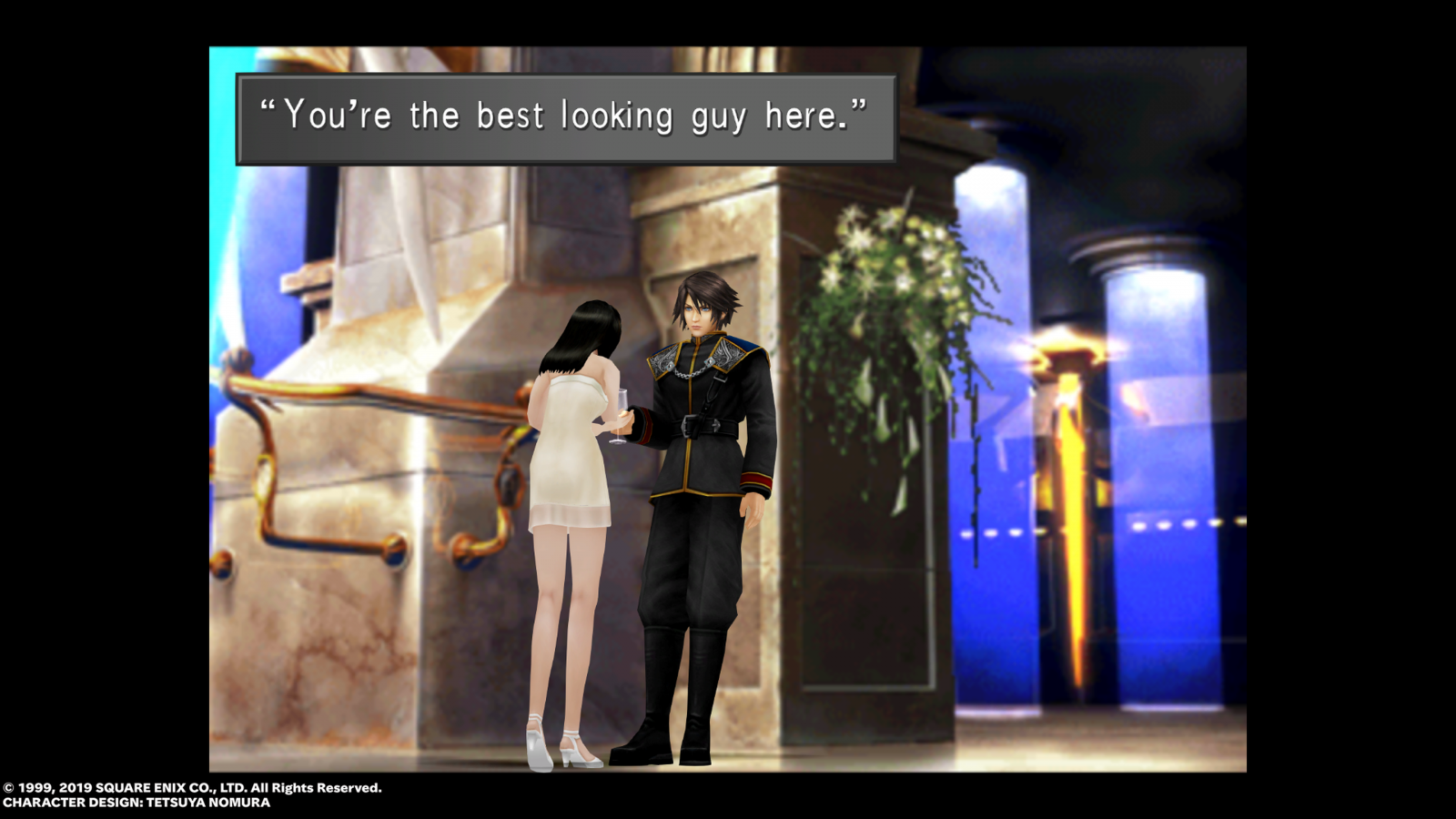 Finally, we come to the remaster itself. Die hard fans will be happy to know that the music used is the original PlayStation version of the tracks instead of the PC release’s midi music. I would have liked for the option to listen to some orchestral versions from SquareEnix’s Distant Worlds series of concerts, but what’s here is truer to the original and still sounds great. Visually, the game looks excellent. Character models and their animations have been enhanced. Squall is no longer the “best looking guy” at this party and instead… He actually is the best looking guy at this party. Pretty much every model in the game looks just as nice and clean, which really helps the game’s art style shine. The backgrounds, however, have seen better days. They still look blurry and can be difficult to navigate at times.

With all its flaws, Final Fantasy VIII is a game that deserves to be as highly regarded as its peers. After playing through this remaster, it’s now one of my favorite entries in the series along with VI, IX, and XIV. Its tale of love and growth is sweet and extremely human. This is also hands down the best version of the game to date. If you’ve never played it, now is the perfect time to give it a shot or revisit this often dismissed title. Especially in a modern context with people being more isolated and having difficulty expressing themselves, Final Fantasy VIII Remastered could mean a lot to a lot of people.

Final Fantasy VIII Remastered is the perfect way to revisit this classic or experience it for the first time. Its themes are more relevant than ever, and its battle system, while flawed in some aspects, is weird, fun, and encourages creativity.

David is the kind of person to wear his heart on his sleeve. He can find positives in anything, like this is a person who loved Star Fox Zero to death. You’ll see him playing all kinds of games: AAAs, Indies, game jam games, games of all genres, and writing about them! Here. On this website. When not writing or playing games, you can find David making music, games, or enjoying a good book. David’s favorite games include NieR: Automata, Mother 3, and Gravity Rush.
Related Articles: Final Fantasy VIII Remastered
Share
Tweet
Share
Submit