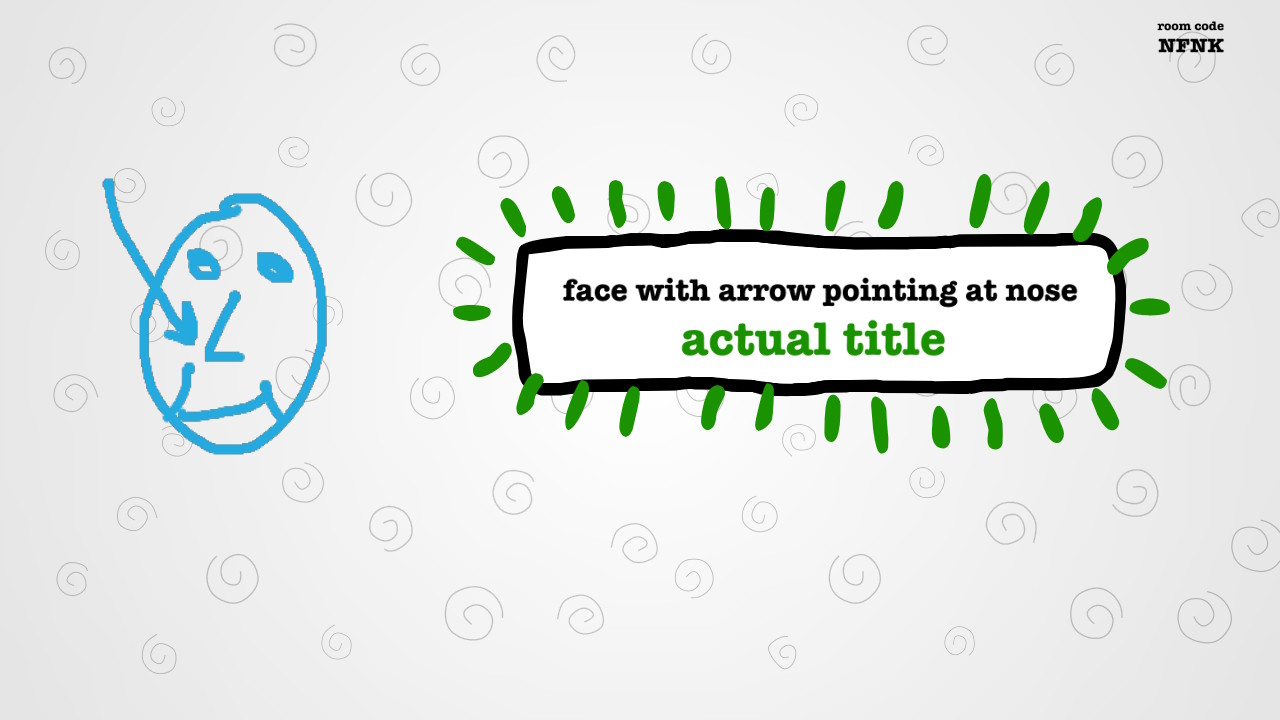 Jackbox Party Pack has become a fantastic, you guessed it, party game. With three entries and a fourth on the way, it was only a matter of time before the series made its way to the Switch. Jackbox Party Pack 3 was released a few months ago with success, so (the team) decided to bring the first two entries to the Switch. But, do the first two entries offer a great mix of games on the level of the third?

First, as an introduction to Jackbox Party Pack, each of the games (except for games you choose to play alone) requires a smartphone or a tablet for each player and an internet connection. The games’ prompts appear on the TV or Switch screen and you follow the prompt on your smartphone. This includes selecting the correct answer, writing a short answer, or even drawing a hilariously bad picture. Each Party Pack is sold separately, but here is a breakdown on each of the games available in each pack:

It wouldn’t be a Jackbox game if they didn’t acknowledge their classic game, “You Don’t Know Jack.” Fortunately for fans, there is a hefty, 50-episode long game of You Don’t Know Jack included in the first Party Pack. This is your basic trivia game, with occasion silly modes such as “Who’s the dummy” where you have to select the correct answer written with a speech impediment. This is the only game in the first collection that can work well alone. You can aim for a high score, there are a lot of trivia questions, and playing through one unlocks the next episode. You Don’t Know Jack is definitely the feature game of the first party pack.

Fibbage XL is a rerelease of the original Fibbage game for up to eight players. In this game, everyone is given a trivia question and asked to write in an answer to fool other players. Afterwards, all of the players choose from the list of answers to guess which one is the correct one. If you choose someone else’s answer, they get points for your foolishness. The glory of this game is occasionally throwing in an answer that is hilarious as is it is wrong. Thanks to these odd answers, it’s difficult to tell if your friend’s joke answers are actually the correct ones, which makes the game even better, of course. If you wanted Fibbage, but preferred the second party pack, Fibbage 2 is a feature game in Jackbox Party Pack 2.

Lie Swatter is similar to You Don’t Know Jack and Fibbage XL in that it’s primarily a trivia game. This time, you’re figuring out whether a fact is true or not. These facts can be ridiculous, and it often leads to a guessing game. The faster you guess, the more points you can get, or lose. But given the strange variety of these facts, it felt like I was guessing more often than in Fibbage XL and You Don’t Know Jack. The best draw of this game is that it supports up to 100 players with a leaderboard showing the top. This is an ideal game for streamers, but unfortunately, it seems that the Switch is unable to stream both Jackbox Party Pack 1 and 2 easily, making this mostly useless.

Drawful is an interesting game that strays away from the trivia spin that the previous three games had. In Drawful, there are two phases. First, players are given a prompt of a picture to draw. This can be extremely difficult, especially if you are drawing with your finger and not a stylus. Unfortunately, you do not have the ability to erase while you’re drawing which could lead you to an unfortunate mess of scribbles and squiggles.

The next step involves guessing what the image is. Each player is shown one of the drawings, and they write what they think the answer is. This could lead to some funny responses, but being a smartass isn’t actually as detrimental as you’d expect. The first picture we were shown was a picture of someone’s face when an arrow pointing to their nose. When everyone gives an answer, much like Fibbage XL, you choose which answer you think is the correct one, and choosing your friend’s answer will give them points, while choosing the correct answer will give you and the drawer points. The answer for the first picture we were shown? It was literally, “face with arrow pointing at nose.” Cheeky, Jackbox, cheeky.

Word Spud is incredibly hit or miss depending on the group you play with. In Word Spud, you take turns telling a story by adding onto a sentence or starting a new one. After you add to the story, the other players have the choice to vote your addition up or down, potentially submitting it to your narrative. This can get very raunchy very fast, but that’s part of the fun of playing in a large group. You’re given points if your story is selected, but honestly, winning doesn’t feel justified here. The points felt like something tacked on to give Word Spud more of a “game” feeling. It’s fun for the first few playthroughs, but gets old fairly quickly.

Quiplash XL is easily my favorite of the Jackbox games in both party packs. At the start of each round, players are asked two questions such as “name something Godzilla does when he’s drunk,” and the players put in what they think the best answer would be. Not every player is given the same questions, as each question will have exactly two answers. When the answering is done, the questions are shown on the game screen, and the other players vote for the best answers. Rather than relying on knowledge of obscure topics, this game is driven by creativity, and if you manage to win over all of your friends, you get a “quiplash” for bonus points. If you have the right group of people, this is a fantastic game, but it’s only great if you have a larger group. Having the minimum, three, makes it a more shallow experience, with much less variety.

Bidiots was an interesting game in the second party pack. Once again, the game asks you to draw a few things, such as a person dancing, or falling. Afterwards, everyone bids on the drawings, hoping to sell them to potential buyers afterward. The real goal of the game lies in the art collectors you’re trying to please. They give you hints on how much each drawing is worth, and you have to figure out if what the person drew on screen is the drawing they’re looking for.

Sounds simple right? It’s not. It’s actually really clever. One player can be given hot cocoa while another is given hot bowl of soup. Someone could easily confuse the two drawings and end up bidding way more for hot cocoa than it’s worth, but the game won’t even tell you that hot cocoa is an option, vice versa for the other players. This becomes a massive mess of chaos and bid wars that can lead to many disappointments if players mistakenly purchase the wrong drawing.

Earwax relies more on audio cues than it does visual. During each round, one of the players is the “judge” who picks a prompt. The other players use a limited list of sounds to follow that prompt, in hopes of pleasing the judge. This game is more of a cool idea and less of a fun or gut-busting good time, unless you somehow are given a perfect sound. Each player is given a different list of sound effects, which can feel unfair at times, as there isn’t a large list and you’re unable to preview them. Earwax is an interesting concept that unfortunately falls flat on its face unless you have a really engaging group.

Finally, we have our last game in the two party packs: Bomb Corp. This one isn’t about beating your friends–it’s about working together. It’s also about feeling so stressed out you’re about to explode, but that’s part of the fun. Each player is given a separate list of instructions on how to defuse a bomb (or organize an explosive filing cabinet), and everyone has to work together to cut the bomb’s wires without triggering an explosion. The game turned out to be an exercise in communication, patience, and stress, but it sure was fun. I thought Snipperclips was bad, but this takes things to a new level. Diffusing the bomb is an exciting process, and you really feel like you accomplished something by the end of it.

Both Jackbox Party Packs offer a lot of fun for what they include. While each pack is $24.99, you’re basically getting $4.99 per game. Each pack contains lower points such as the first pack’s Lie Swatter, or the second pack’s Earwax, but even the low points can be fun in the right setting. However, keep in mind that these games are geared towards groups of people, and each requires a smartphone or a tablet, as it is your primary controller, and an internet connection. If your internet were to suddenly go out, the game will end..

There are a few issues with the Switch port, however. While the packs on other consoles could be easily streamed for more audience members to join in, the Nintendo Switch does not allow for easy streaming without an external device. In addition to this issue, smart phones are not considered controllers and the Switch’s screen will automatically dim after a certain amount of time unless you manually go into the system and shut that feature off. Besides this issue, having the ability to take Jackbox Party Pack anywhere (with wifi, of course) makes it a fantastic party game.

Jackbox Party Pack 1 & 2 each contain their own unique set of games for hours of hilarity with your friends, and having this available on the go with the Switch makes it all the sweeter. Each pack contains a wide variety of games such as the first containing You Don’t Know Jack and Drawful and the second containing Fibbage 2 and Quiplash XL. Solo players beware, this game is primarily for parties.

Sean Anthony likes to combine two of his passions: gaming and writing. Gaming has been a huge part of his life ever since he played his first game as a child, Kirby's Adventure. He aspires to have his name attached to an article that makes the whole world go, "Huh, that's neat, I guess."
Related Articles: The Jackbox Party Pack, The Jackbox Party Pack 2
Share
Tweet
Share
Submit