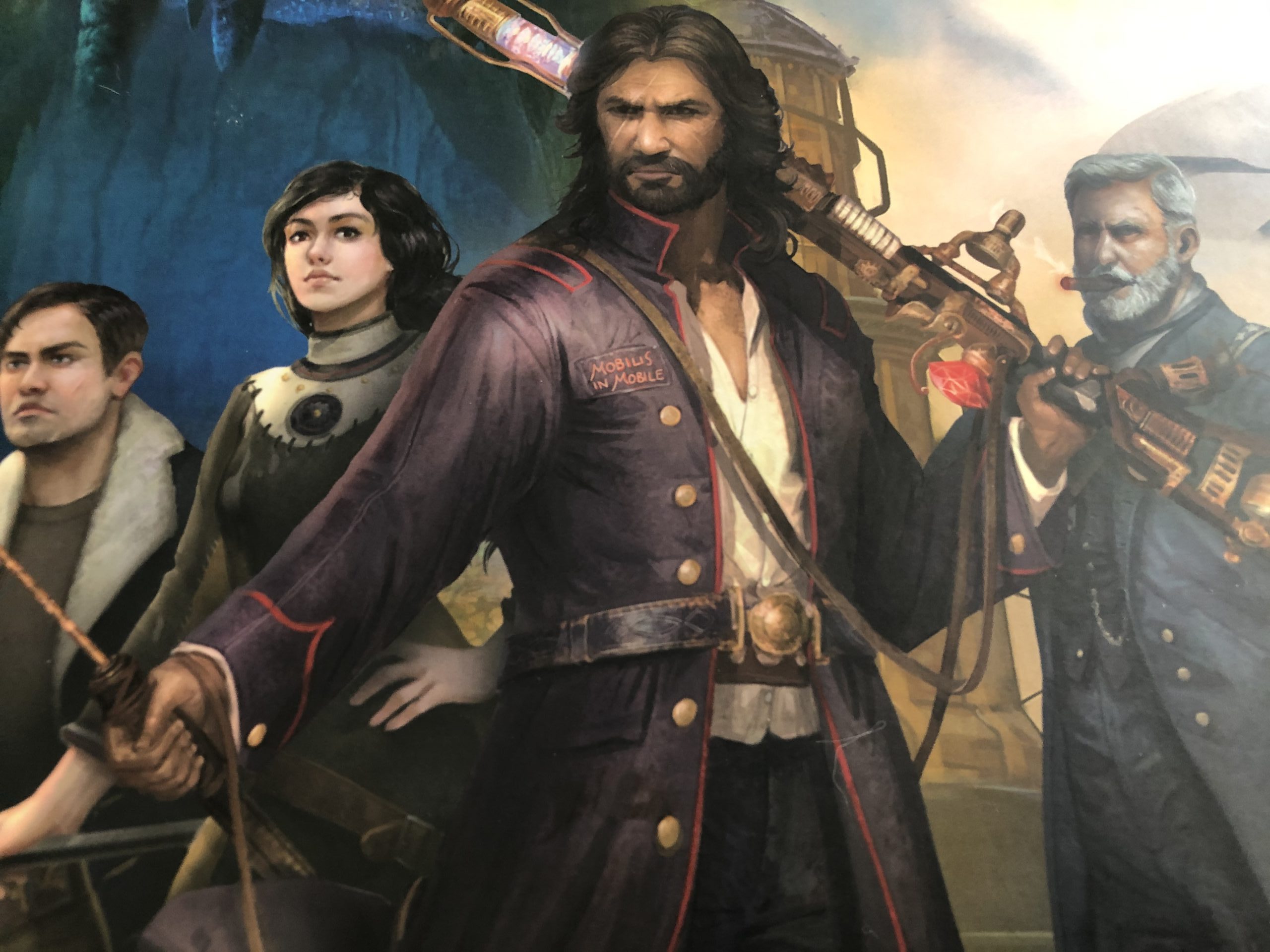 Whether leagues beneath the sea or just above the clouds, Nemo Rising: Robur the Conqueror has an adventure in store. How worthwhile an adventure? Well, that depends on your interest in the subject matter and how much you mind repetition. Nemo Rising is a cooperative game for up to four players, charging you to make your way through (or around) foes as you work to complete missions and make it back to your ship safely. While everything in Nemo Rising works, generating a competent game and a satisfying one are two different goals. There really isn’t much wrong with this game from a design standpoint, but that doesn’t mean that it comes with a strong positive recommendation.

Nemo Rising is based on a sequel series about the antagonist of Jules Verne’s 20,000 Leagues Under the Sea in formative years, battling mad scientist Robur the Conqueror. He is joined by Sara Dunan and Adam Fulmer, costars in the novel, as well as President Ulysses S. Grant; in case you’re wondering you did read that correctly. The game utilizes a steampunk aesthetic. While I would like to be dismissively pithy and state that it’s “steampunk” in the sense that its art occasionally features extra gears or wheels, that is only really true about half the time. Some of the art is just a normal thing with extra odds and ends, but the fluorescent undersea vistas and cloudy banks of the upper city do catch my attention every time I look at them. While you will catch the occasional monster with obtrusively awkward design, for the most part everything looks clean and appropriate. 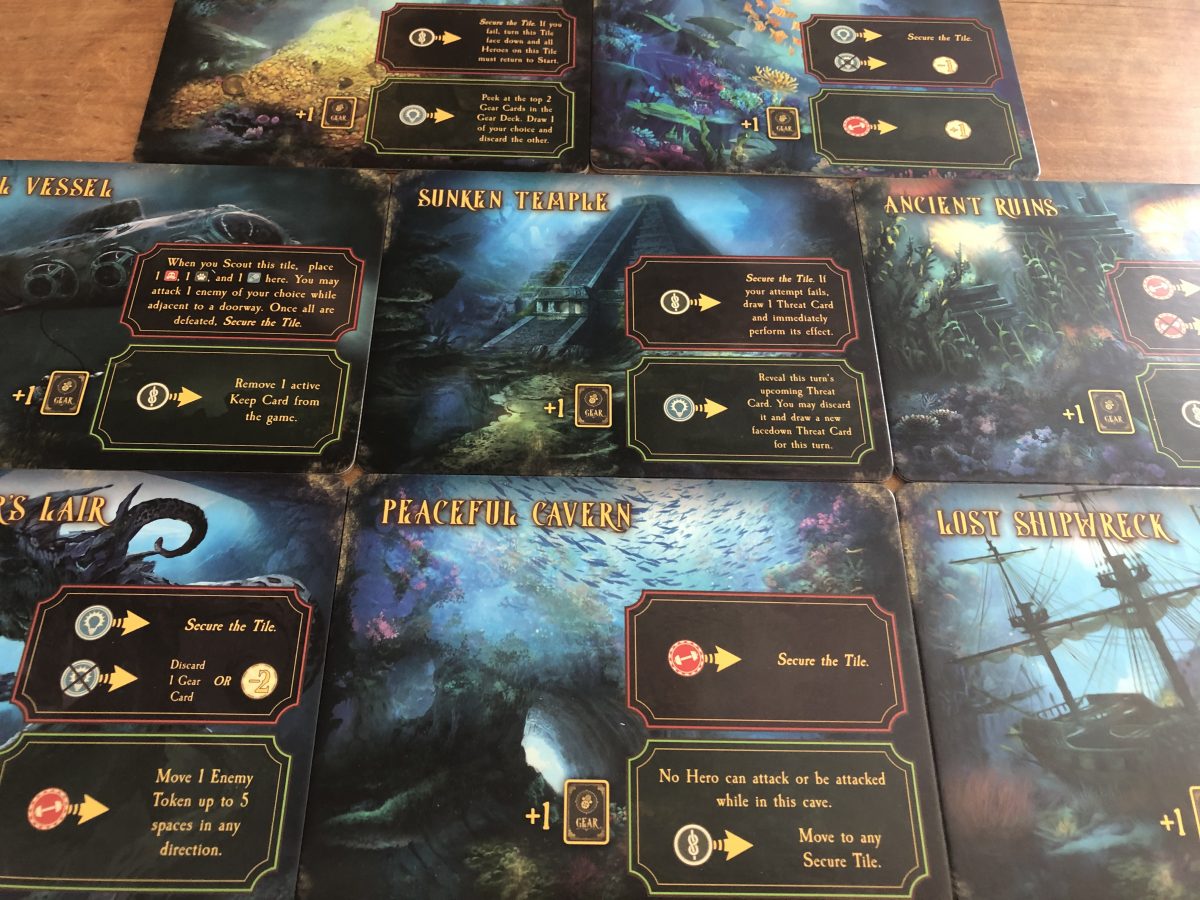 The game board is a large map, with empty slots ready for randomly chosen locations from the two scenarios. Once you decide whether you want to venture to the great depths below or the skies above, you will shuffle these locations and randomly place them on the map, to be discovered later. You will then separate the specialized scenario enemies and randomly choose two mission cards, which are extra objectives that you must complete before winning the game.

To set up from that point, you will choose difficulty by selecting how many mission points you will start with. Reducing mission points by losing fights or other calamities will bring you close to zero, or losing the game entirely. You then shuffle the gear, action, and threat decks, everyone takes 6 action tokens to keep track of their actions, and draw a threat card to set some enemies down and start the game. 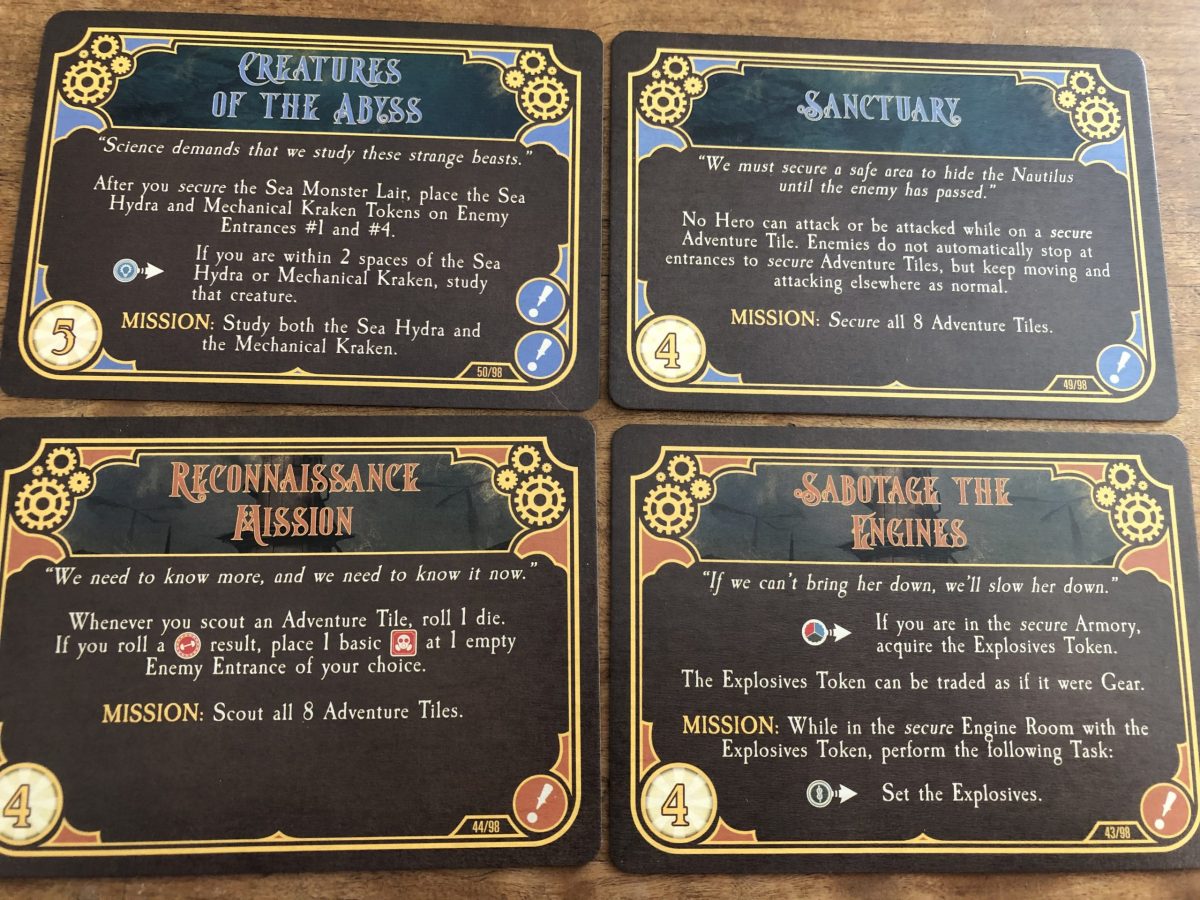 The goal is to discover and then secure (completing their individual tasks) locations, complete both mission cards, and make it back to the starting location intact. You will be stymied by threat cards which generate every round, spawning or moving enemies or throwing other difficulties in your path. Once the early threat cards are resolved, players can make their actions in an agreed upon order. There is a potential for issue with the agreed turn order, as some people will have the tendency to overanalyze the situation to make for perfect play, but the game’s strategy is simple enough that one would have to be peculiarly neurotic to try to “perfect” a round of Nemo Rising.

An individual turn begins by choosing one of the faceup action cards. Each card has a top and a bottom effect to choose from, the more powerful of which comes with an associated mission point cost. Those bonuses can grant you permanent attribute boosts (for brains, brawn, or skill), often at cost, increase the number of dice you roll for tasks, or give you enhancements like stealth, shortcuts, or extra defense. With your action tokens you can move a space, scout a tile (flip face up) and place a token on it to denote that you have not yet claimed it. You can also attempt a task or attack an enemy. Enemies are largely roadblocks to movement and securing places, but they can attack you. If you fail at tasks, you may incur penalties, but successfully securing an adventure tile brings bonuses along with it. By completing special objectives, you can acquire special Gear cards. Those cards grant bonuses but tap until you can pay their recharge cost. 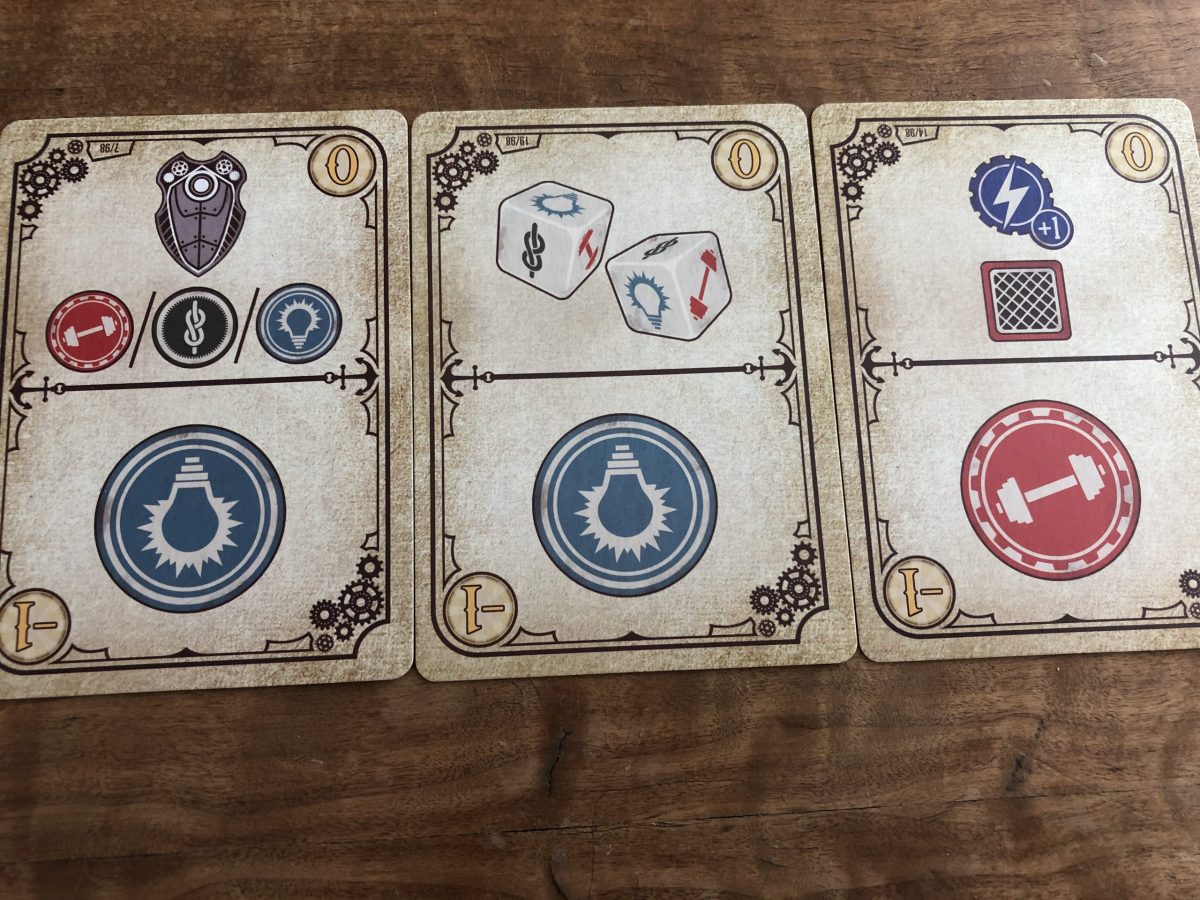 While I am glossing over some specifics, that is largely the game. It seems simple enough, and it is once you learn the rules, but you will find the rulebook a curious roadblock to engaging with the game. Despite the lack of complexity, you will have to read through the rules several times before you figure out how to play. For one, many concepts are referenced before being introduced and it overall feels out of order. If you want to learn this game you should skip the first quarter entirely. It’s a waste of your time. It introduces things but without sufficient specificity to tell you how they are actually used, because of all the terminology you haven’t encountered yet. I get the impulse to introduce players to game concepts generally, but this will only leave you more confused. Even when things are introduced, they are reintroduced later on, sometimes multiple times, and it takes some jumping around just to figure out what each of these components actually do.

Even later on its organization is spotty, and broken up in ways I found unintuitive. In a way this isn’t a serious issue. You can teach this game in a scant few minutes, once you have wrapped your head around it yourself. But getting there is far more work than it should be.

At times the wording is curiously complex. You will often find the text overly wordy, confusing the explanation of a fairly simple rule by weighing down the sentence structure. Many times I found important rules buried long after sections they are relevant to, requiring much flipping back and forth and cross-referencing just to find out how an edge case or modification works in game. A rewrite of this book would help get its concepts across in a more concise manner, because whatever issues with the layout and writing of the rules, you can get past it and actually teaching the game to others is a breeze.

You may have noticed me using a somewhat clinical tone when describing the mechanics and gameplay, and that resonates with my feelings on the game. Is it boring? Not exactly. You do have decisions, but those decisions are so limited as to often be obvious. You spend the first few rounds exploring and specializing, granting characters the bonuses you need to succeed, and then proceed to make your way around completing missions and rolling dice. While the randomization of mission cards, location spacing, and threat cards adds some variation, the play experience does not feel meaningfully different from game to game. Even adding in an extra scenario only provides a modicum of variation, as the base mechanics are so tightly focused around a few attributes and rolling them successfully. 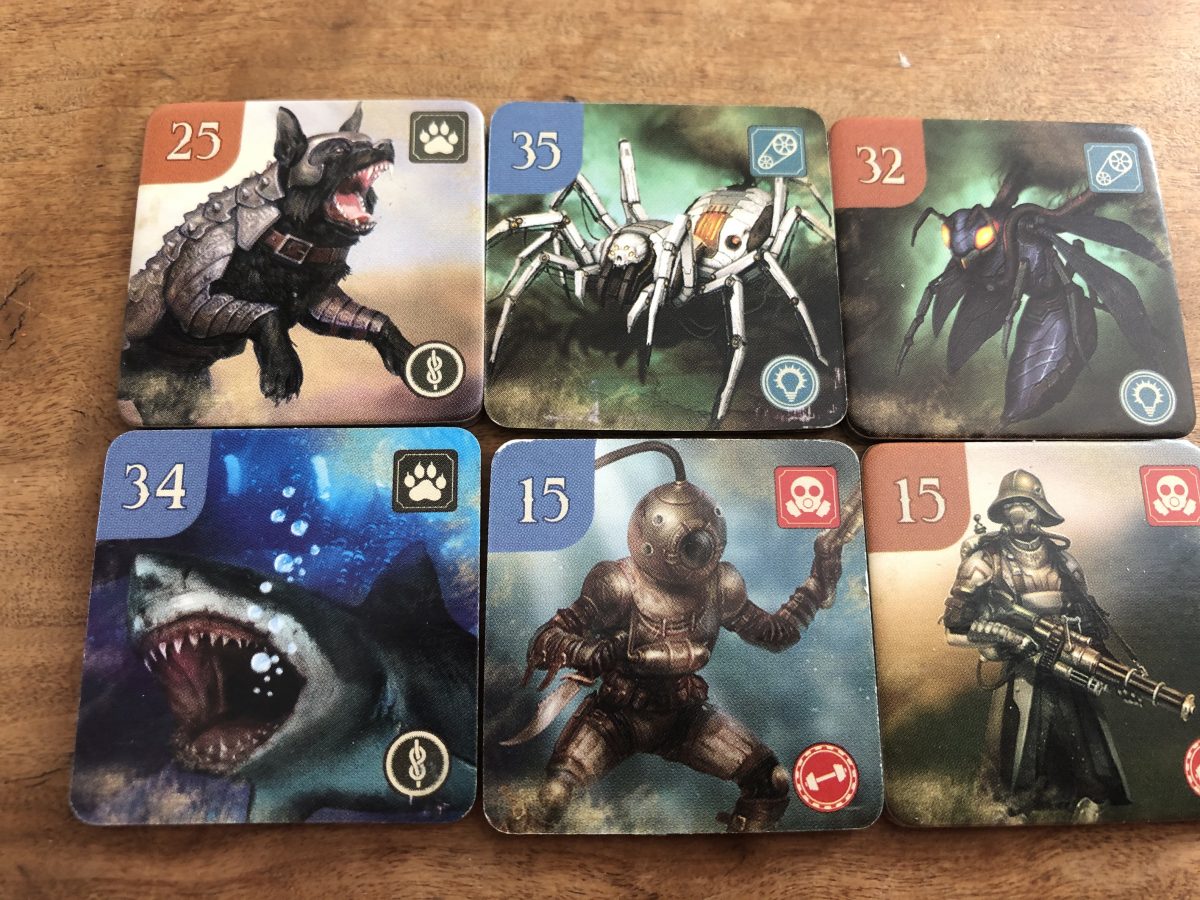 The more I played this game, on either scenario, the more I felt that I was repeating prior playthroughs with minor changes due to spawn locations and equipment. You largely fall into a correct few equations for allocating and using resources, and what follows is seeing how the game throws wrenches into those gears and trying to mitigate those issues. Increasing the difficulty does lead to some harsher choices, and is my recommendation if you want to get the most out of this game. However, even when running full steam ahead with a group of engaged individuals, experiencing this game as it is intended to be experienced, you won’t find much on offer. Beyond the initial puzzle of where to place upgrades there is little to surprise or challenge you.

You can have fun with Nemo Rising, at least for a while. If you come back to this game multiple times in a row, it starts to wear thin. The modular nature of the game means that they could easily add new scenarios if they chose to, though it’s unclear how much that would help. Ultimately the strategy of getting the right enhancements to use at the right time is pretty limited and easy to game, making the experience less of a challenge than a calculation, and one that doesn’t bring along much to recommend it.

Nemo Rising has smart ideas and decent presentation in a package that does little to challenge or reward its players. Its mechanics to challenge you to make careful use of resources, but with limited choices and a rulebook that stands as a confusing barrier to entry, those challenges can feel repetitive. There is little truly wrong with Nemo Rising, but at the same time not enough done right to make it the right decision for most people.

John Farrell is a legal aid attorney specializing in domestic violence, living in West Chester Pennsylvania. You can listen to him travel the weird west as Carrie A. Nation in the Joker's Wild podcast at: https://jokerswildpodcast.weebly.com/
Related Articles: Nemo Rising: Robur the Conqueror, Tabletop
Share
Tweet
Share
Submit