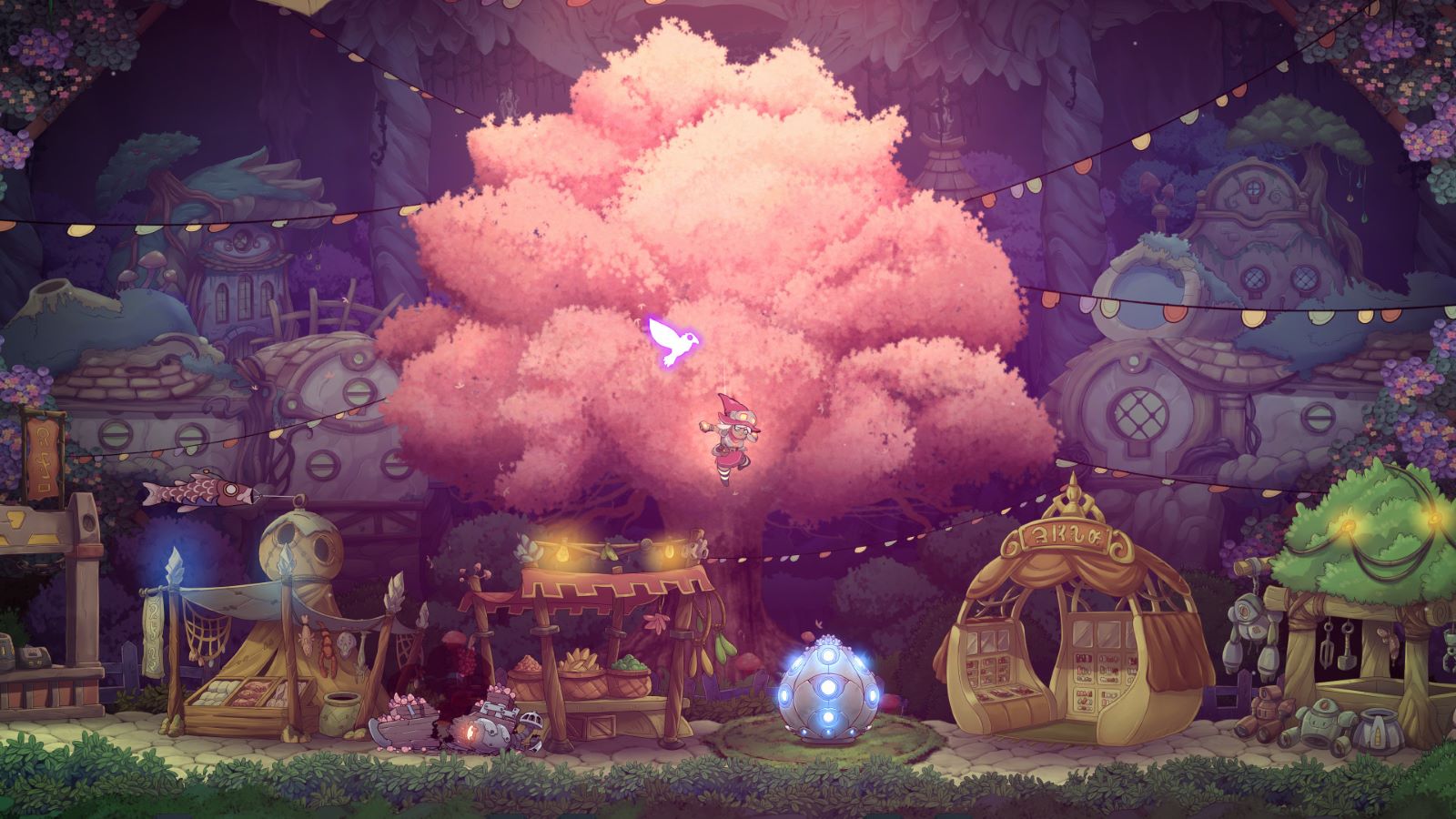 The Knight Witch comes from Super Awesome Hyper Dimensional Mega Team which is the single greatest studio name I have come across. They’ve mainly released a couple of mobile titles at last venturing into the realm of console and PC in 2017 with Rise and Shine, a side scrolling shoot ’em up with integrated puzzles throughout. The characters are relatable, the gameplay is a blast, and it was received well so we all wondered what was next for them. Years later, I believe the team has their crowning achievement in the truly charming The Knight Witch, so let’s get into it.

To start off, The Knight Witch does a great job of introducing the world to you. 14 years prior, a brutal war took place between the rebelling Knight Witches and an evil emperor’s robotic golem army. The climactic final battle ended with a colossal explosion that left a crater in the ground, revealing an underground haven built by an ancient race of giants. With their world around them crumbling from the explosion, both sides fled underground to safety. 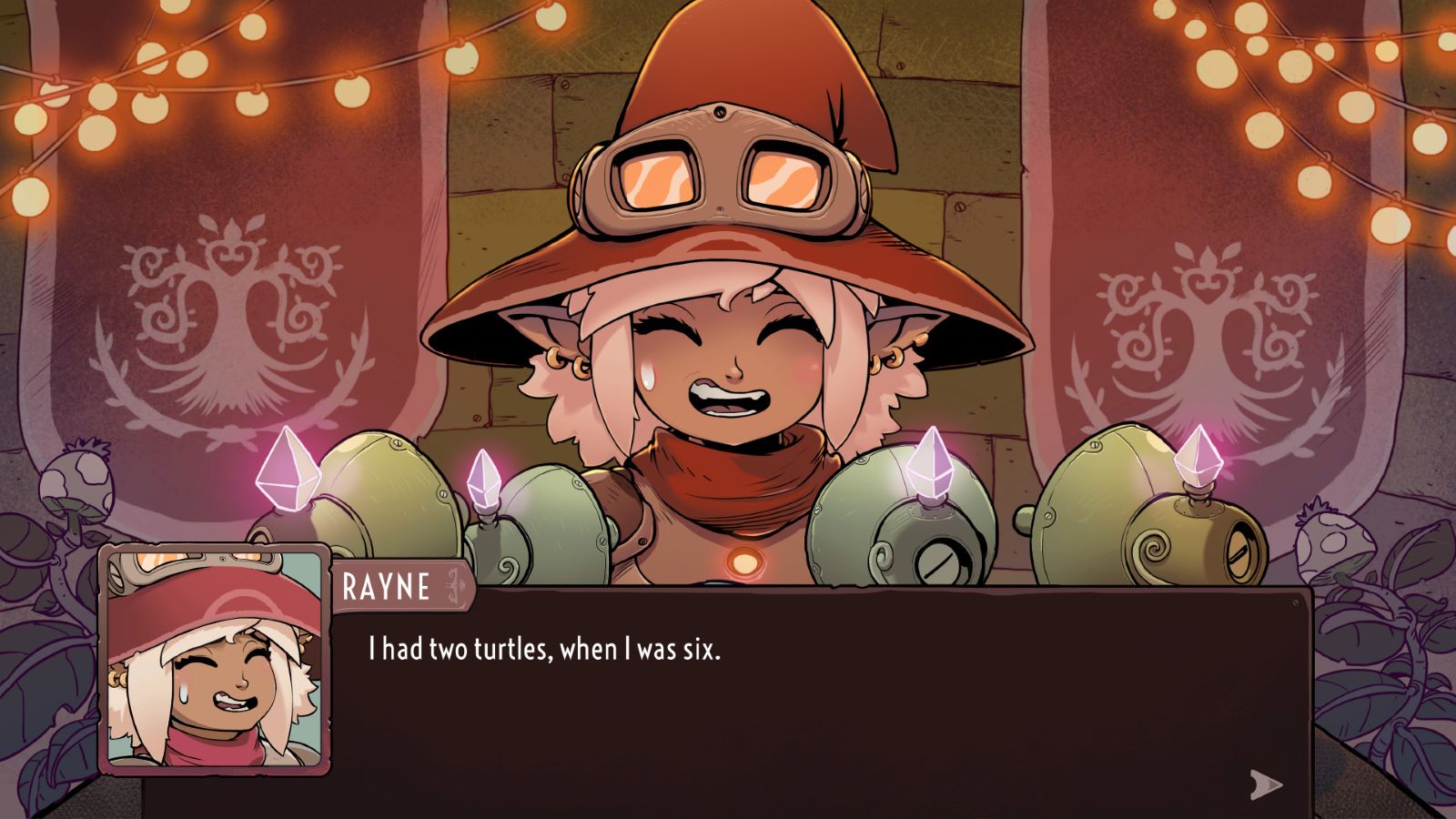 In the present, the story shifts to Rayne, a former Knight Witch trainee who was let go from the squad before the war even started. The Knight Witches are superheroes to the townsfolk and obtain their strength through the citizens’ belief in them. She is satisfied with her quiet life, yet inside still has a fire to prove she has what it takes to be a Knight Witch. After an attack on the town, you discover a new enemy has emerged with a revived golem army and is looking for revenge. While the Knight Witches are serving as a distraction for the army, you are thrust into the spotlight. The head of the town remembers your training as a Knight Witch and tasks you with venturing out and repairing the city’s machine infrastructure, with each region having a specific part that needs fixing, while also defeating enemies and bosses. 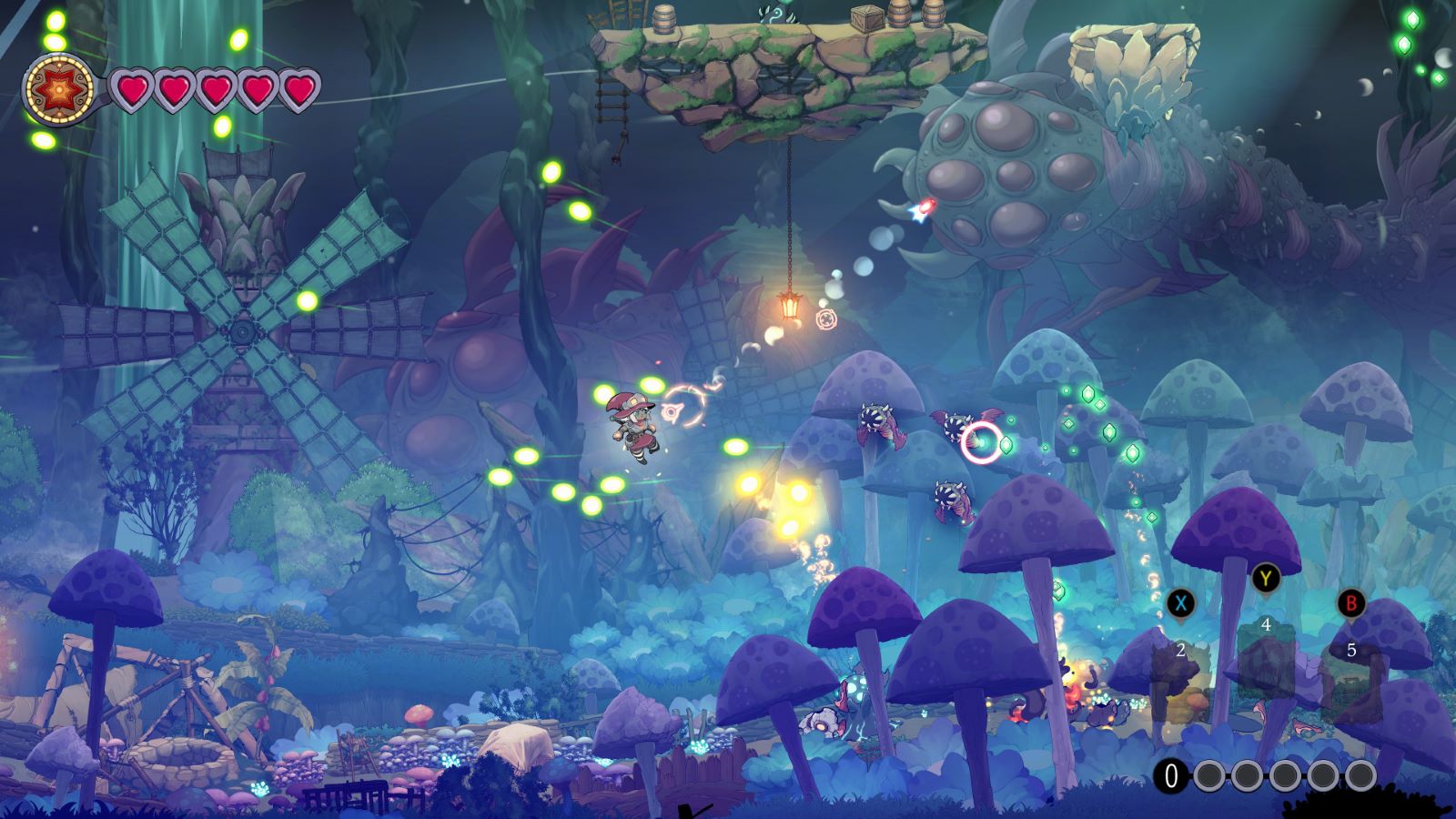 The Knight Witch is best described as a Metroid Vania shoot ‘em up. Metroid Vania means each region of the map is nonlinear and utility gated. You move from room to room exploring and discovering which is the correct path to reach your objective. Some rooms can only be accessed through certain paths, while others won’t be unlocked until you reach a certain part of the story or obtain a specific item or ability.

Gameplay mixes in the classic shoot ‘em up or “bullet hell” style with spell casting as an additional play style. As you level up, different perks unlock that you choose between. There are the “Knight” skill sets which focus on powering up your gun, while the “Witch” sets improve the spells cast through the game’s card system. You have the freedom to spec into just one path or a combination of both. 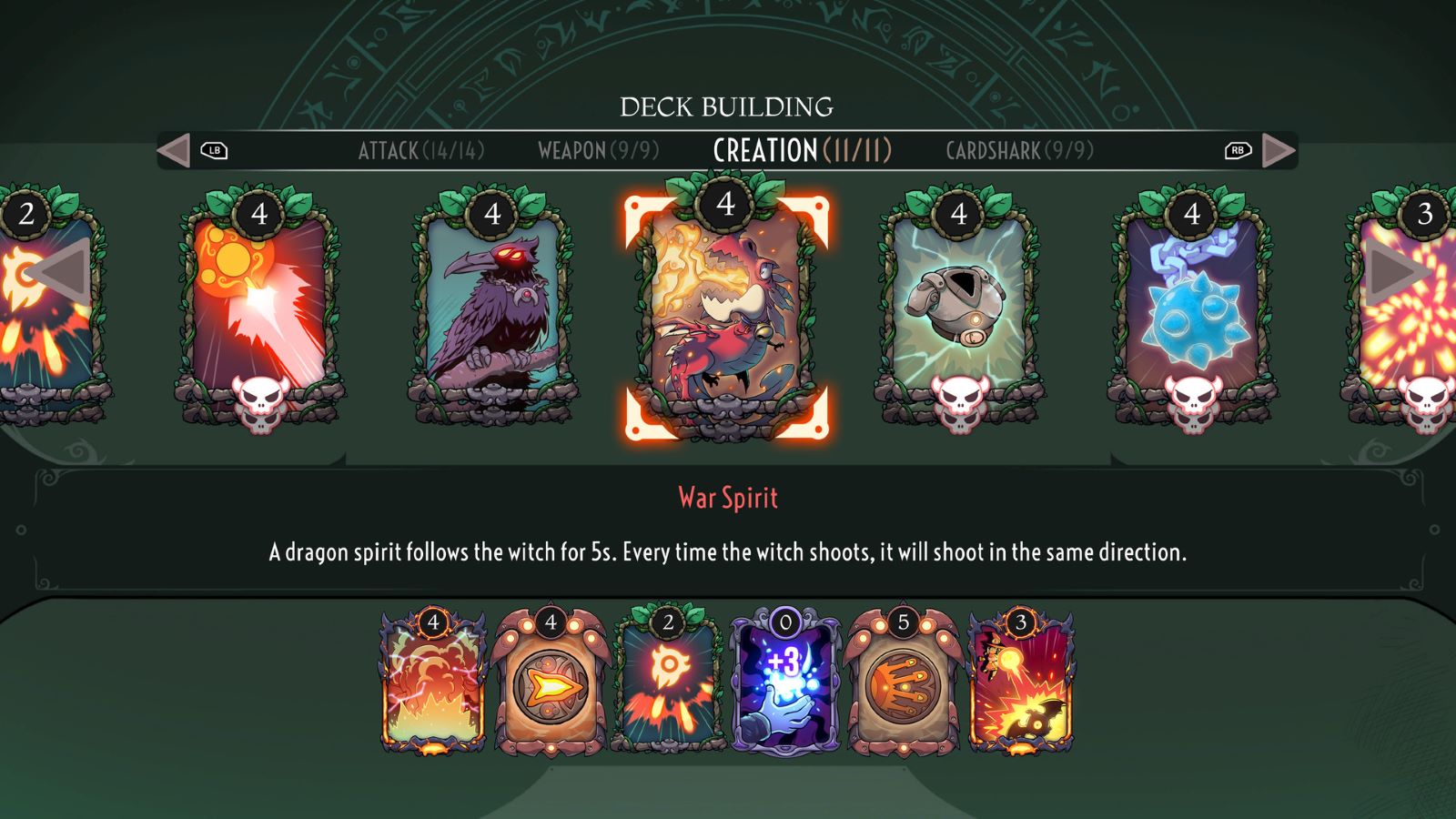 The card system is easy to learn and understand, which makes it very effective as a gameplay mechanic. Throughout the game you will collect spell cards that do different attacks or defensive moves. Each card costs a specific amount of mana that you acquire from inflicting damage on enemies. Cards have no limit to the number of uses, however you can only hold a certain number of cards at a time and those rotate in and out of your hand once cast. The entire system was a joy to play and made for great interactions with enemies.

I was surprised at how well the shooting system works, as well as how accessible it is. You can aim your gun manually at enemies in a 360 degree direction, or use the auto aim feature. If you’re a player with less skilled aim, you can simply let the game auto target the closest enemy. The tradeoff here is that your gun does less damage, but it allows you to focus more on dodging bullets around you. The nice thing is there isn’t a toggle you switch each time; simply not using the right analog will switch for you. I used both as certain segments will focus on a single enemy, while others have multiple enemies shooting lots of bullets your way. Combat never feels dull because of it, and I really enjoy that. 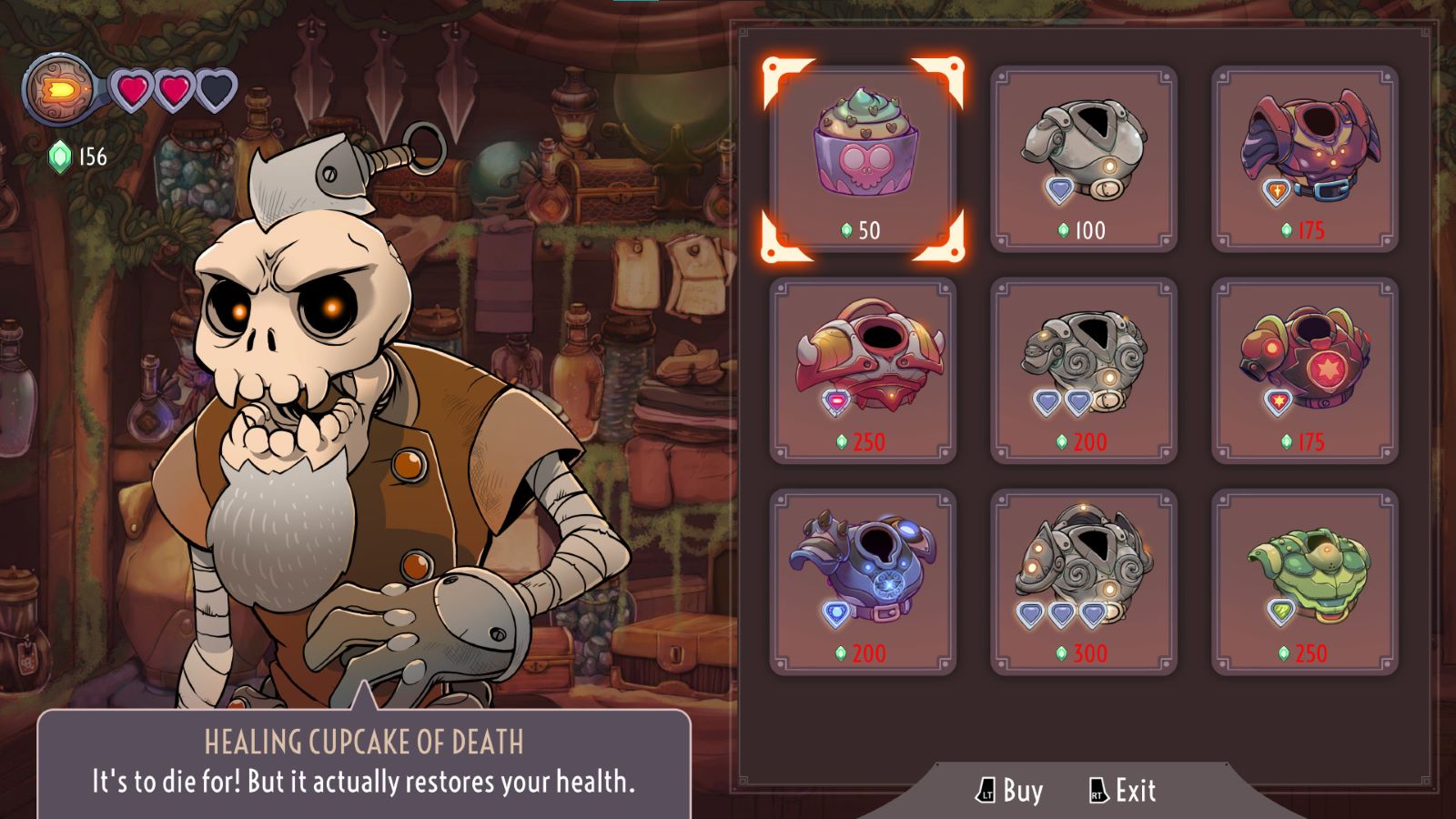 The team also throws some rogue lite elements into the mix. Hidden bosses and ambushes are placed in different rooms that reward spell cards. Arcane beacons are placed throughout that serve as save points and allow you to swap out spell cards from your deck. Shards are your in-game currency you use to purchase armor. The armor you purchase has durability built into it on top of having a variety of perks. Certain perks like ‘Once Broken’, a rocket that shoots out to target the enemies who hit you, are a lot of fun. Being able to pick an armor piece, depending on what encounter you are heading into, is a big advantage and shows the developers put great thought into the game. 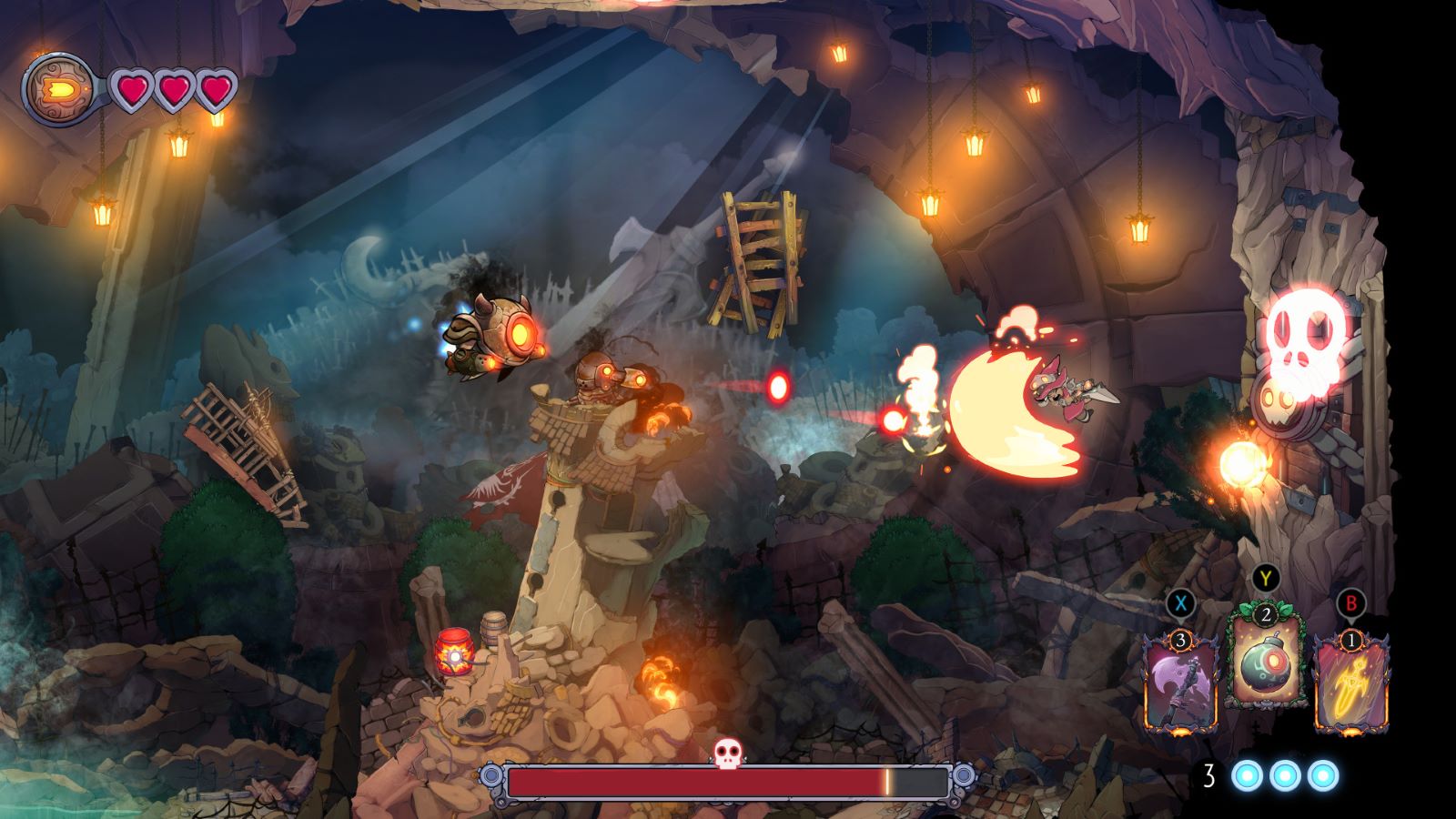 From a tech and artistic standpoint, the game runs incredibly smoothly with no bugs or performance issues. It took me a couple hours longer to finish my playthrough because I was sitting and appreciating the visuals and score that are so wonderful. The hand drawn art style and background music need to be nominated for awards. Each area feels, looks, and sounds so different, it beautifully places you in the world.

Playing through Knight Witch, it’s hard to find any faults in the game. My only feedback is more a question than critique as the bosses and ambushes you encounter vary in difficulty. There is randomization as some bosses of the first couple areas are more difficult than ones late in the game. Generally, as you progress from one area to the next, the enemies grow stronger as you do. It threw me off a little while playing as it’s not what one expects. If this is purposeful to add an unpredictability factor, then that’s great. However, it’s not mentioned anywhere that I could find.

I cannot praise this game enough, and I encourage everyone to give it a shot. My prediction is The Knight Witch will be chosen for many different awards and nominations, as this game is too well made and designed too not be. Don’t sleep on this one.

The Knight Witch is an endearing tale that perfectly blends fast paced shooting and satisfying spell casting. From the sensational artwork and score to clever game design, the entire experience was remarkable.

Noah is the resident weeb who spends most of his time gaming and watching anime. His goal is to expand his skills while meeting new people. You have probably seen him feeding the other team kills in Overwatch Comp or speculating Star Wars and One Piece. Follow him on twitter @RigsbyNoah.
Related Articles: The Knight Witch
Share
Tweet
Share
Submit