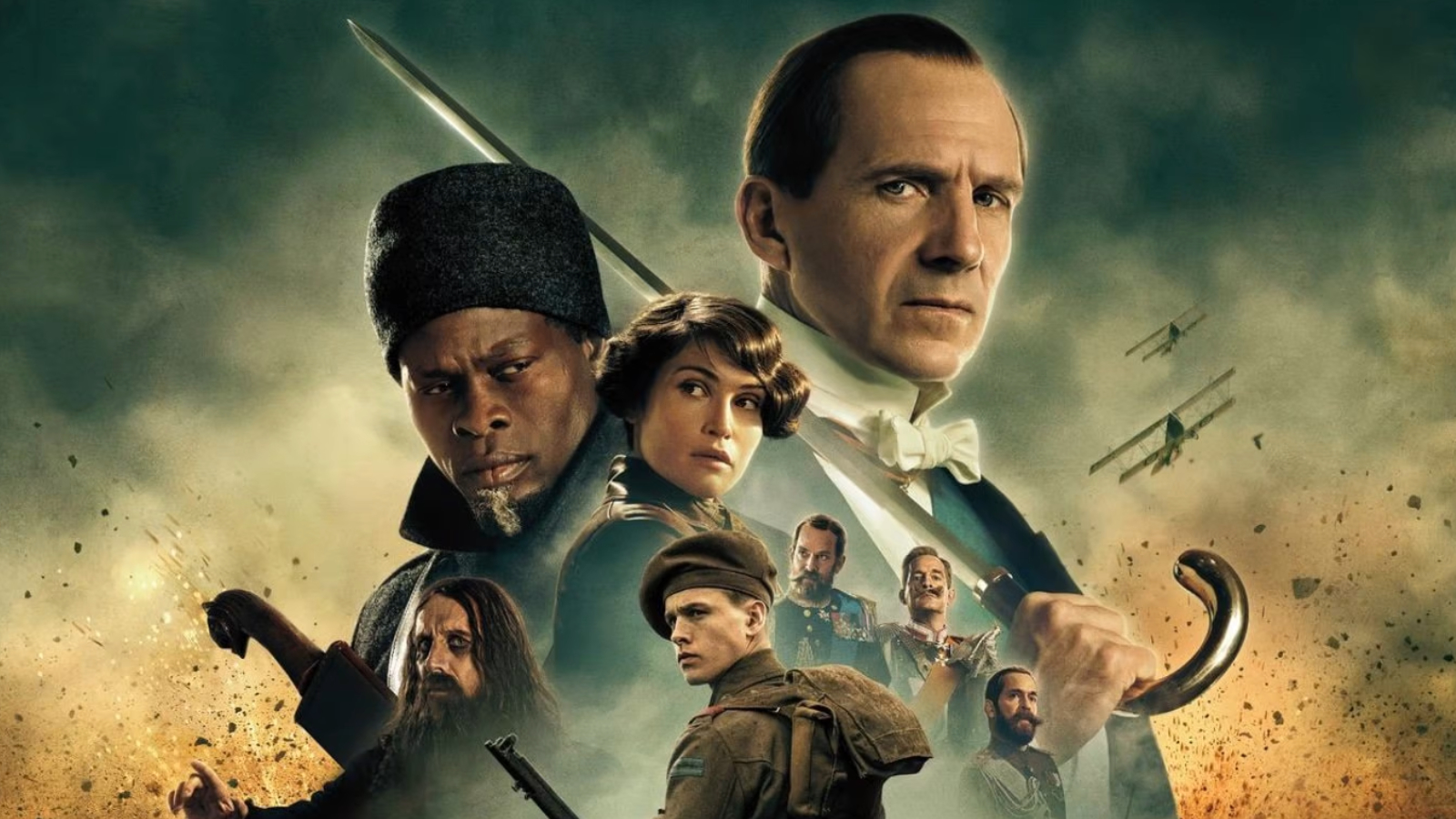 History is a funny thing. It’s written by the victors, to be sure, but it’s also interpreted and often sanitized. What we know happened isn’t always what actually happened, and The Kings Man celebrates that fun fact with reckless and fantastic abandon. A prequel to Kingsman: The Secret Service, and The Kingsman: The Golden Circle, this third outing from Matthew Vaughn and team gives us the origin story of The Kingsman organization, as well as much of their tenants and teachings. Let’s take a look at the Blu-Ray for the release from 20th Century Studios and see if this release is more Oxfords or Brogues.

The story of The Kings Man, without giving away too much, the story revolves around the founding of The Kingsman agency. Ralph Fiennes plays Orlando Oxford, the Duke of Oxford and the father to an orphaned son. As a war veteran, he sees the danger in the world and wants to protect his son Conrad (Harris Dickenson) from it. Unfortunately, an evil group of real-world villains including Rasputin (Rhys Ifans), Mata Hari (Valerie Pachner), and Erik Jan Hanussen (Daniel Bruhl) spin hidden wheels behind the scenes in order to push the world into the first World War. Princip’s assassination of the Archduke Ferdinand catapults Europe into war, as a mysterious man named The Shepard pulls the strings from the shadows. It’s all the trappings of a serious Kingsman period piece, but with the comedy and over-the-top action we’ve come to expect.

It’s in this balance that I feel The Kings Man finds its strongest footing. It touches on historical accuracy just enough to ground it, but fills in the spaces in between nicely and in such a way that is uniquely Vaughn. Also true to the Director, he’s managed to collect what can only be described as an all-star cast. Ralph Fiennes as Orlando Oxford, Rhys Ifans as Grigori Rasputin, Gemma Arterton as Polly, Harris Dickinson as Conrad Oxford, Djimon Hounsou as Shola, Matthew Goode as Morton, Daniel Brühl as Erik Jan Hanussen, and the incredible Charles Dance as Kitchener round out an amazing cast. Many of these folks probably walked over from other Disney / Marvel sets as most have starred in other productions from the mouse house. Honestly, the only actor I didn’t enjoy was triple cast – Tom Hollander as King George, as well as Kaiser Wilhelm, and Tsar Nicholas. I feel like his performance came across a little undercooked, but it’s a small wobble in an otherwise peerless cast.

The Kings Man isn’t shy about embracing the fantastic, and nowhere is that more evident than the movie’s indulgence in stunning vistas and bombastic fight scenes. Vaughn’s vision in the second movie focused around crazy special effects and camera tricks, but here we see him emphasizing more character development, spycraft, and interestingly enough, a heavy dose of history. If you felt like Golden Circle was too over the top, you’ll appreciate the more grounded, and frankly reserved, approach. I’m not sure if that’s a result of the tempering of Vaughn, or the influence of co-writer Karl Gajdusek, but it works out to a more well-constructed movie from beginning to end. 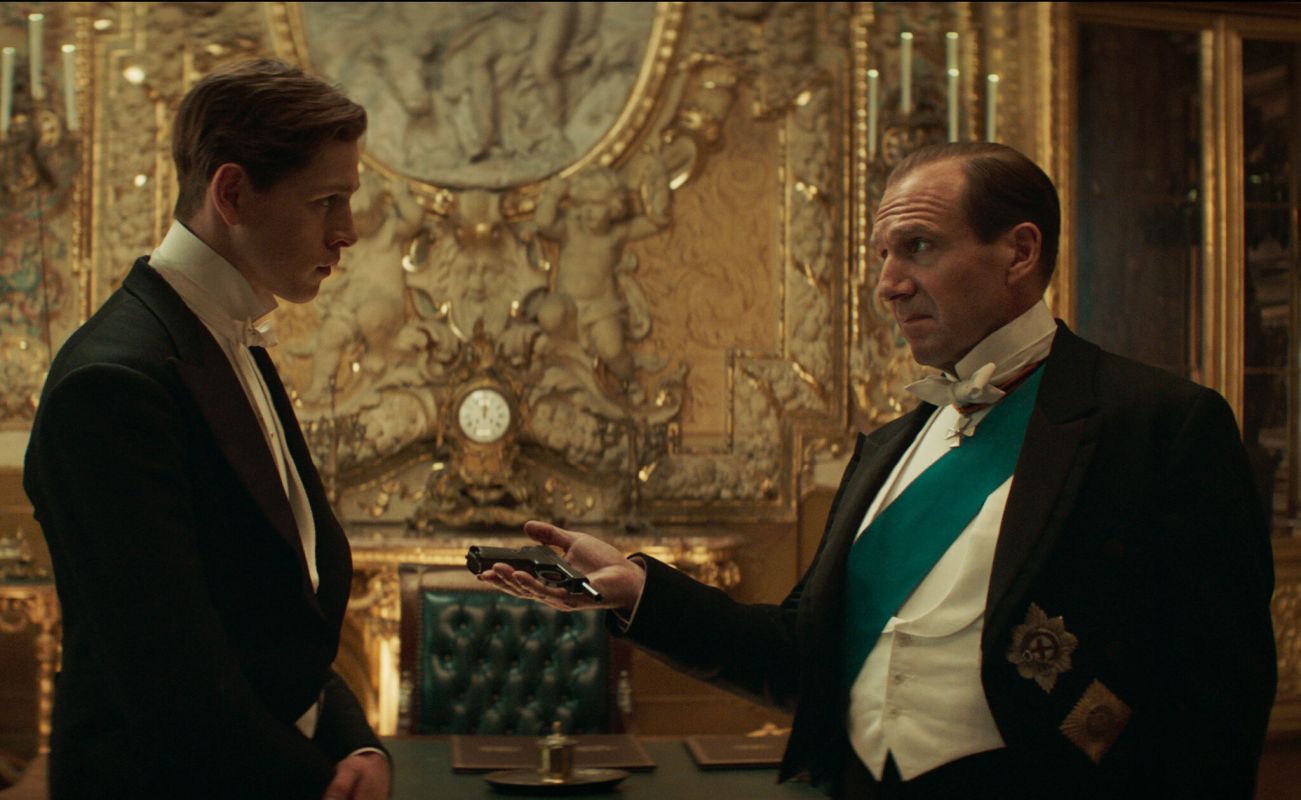 It wouldn’t be a Kingsman movie without some over the top action, and The Kings Man doesn’t disappoint. The dance/fight scene between Rasputin, Oxford, Shola, and Conrad is absolutely superb. If you enjoyed Colin Firth’s amazing fight scenes in the previous movies, you are going to dig this incredible and rather lengthy square-off between these amazing actors. Similarly, the incredible silent knife fight sequence is a masterclass in close combat knife fighting, and a real highlight. I don’t want to ruin it if you’ve not seen the film, but suffice it to say it’s easy to see why the team included the background and fight choreography sequence totaling over 15 minutes.

Some of the same story beats present in The Kings Man pay wonderful homage to the other two. We see Shola do the wall run to rope swing maneuver, followed by a slow motion dispatch of a foe with an incredible leap, not unlike Eggsy’s own battles at the end of the first flick. Similarly, the set dressing scratches the nostalgia itch as you see familiar places such as the tailor shop and its various rooms before it became headquarters to the greatest spy agency the world has ever known. There are plenty of moments in which you’ll be reenacting the DeCaprio meme, pointing at the screen.

Digging into the release on Blu-Ray, there’s a lot to like. The movie is presented in 2:39:1 (16:9 aspect ratio), and even on Blu-Ray the color depth, HDR depth, and contrast look gorgeous. The movie is also available in 4K, which would only serve to make those same features look even better. The movie frequently dips into the shadows and then bursts into overbright light, and the transition is always clean. Given how much Vaughn loves the establishing shot, it’s important.

The sequence where the Archduke Ferdinand is being pursued by Gavrilo Princip really showcases the color gamut. The scenes are brought to life thanks to fantastic props and costuming, and the contrast between the characters and their surroundings makes them pop. Similarly, the muted colors of Rasputin spinning around in his dance of death against the stark white walls of the palace looks amazing. It’s a feast for the eyes. 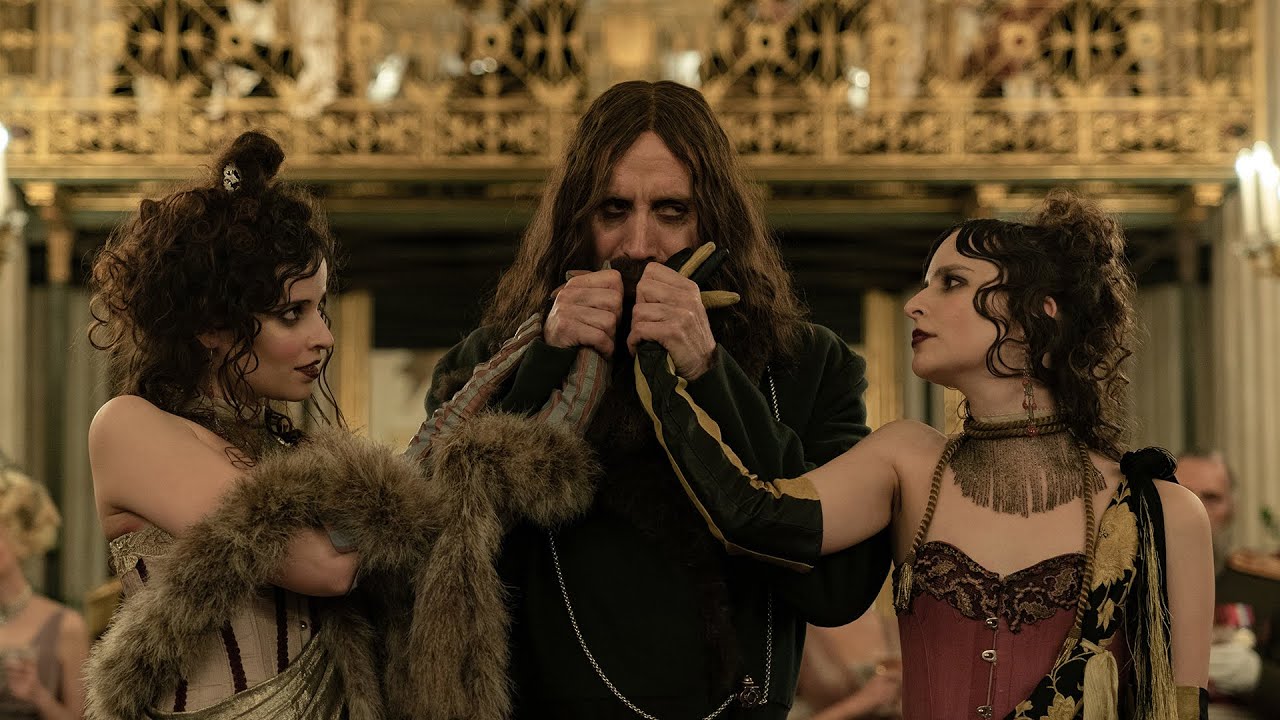 Turning to audio, the disc is encoded with a 7.1 channel DTS-HD audio track that pushes conversations forward, but also tackles the many, many explosions in this movie with ease. The sound mix folds the sweeping orchestral soundtrack into the background for the quiet moments, and bombastically bursts into the fore during those sweeping establishing shots. As somebody who suffers from hearing loss, a proper focus on that center channel is appreciated greatly.

The extras in The King’s Man are as extensive as they are numerous. First up is The King’s Man: The Great Game Begins – a documentary from the filmmakers on the origins of the Kingsman organization. It’s also a massive celebration of the talent on the film in a sequence called Oxfords and Rogues. All the World’s a Stage goes deep into the world-building, but more it reveals some of the tricks that bring the locations to life. There were some sequences that I were certain were shot on a mountaintop somewhere, but were in fact actually on a field with a bluescreen. It showcases the digital wizardry that you simply don’t see unless you get a peek behind the scenes. Instruments of War is absolutely fascinating. It looks at the real-world spycraft weapons and techniques and how they made their way into the film. It also looks into the stunts, including the fantastic silent knife fight sequence. Fortune Favors the Bold puts an ear to the wonderful score for the movie, as well as the sound design for The King’s Man. Just like the special effects on the scenes, some of these sound effects are brought to life in the most unconventional ways. Long Live the Kingsman once again joins the cast and crew as they talk about their favorite parts of this newest movie, as well as the first two films. 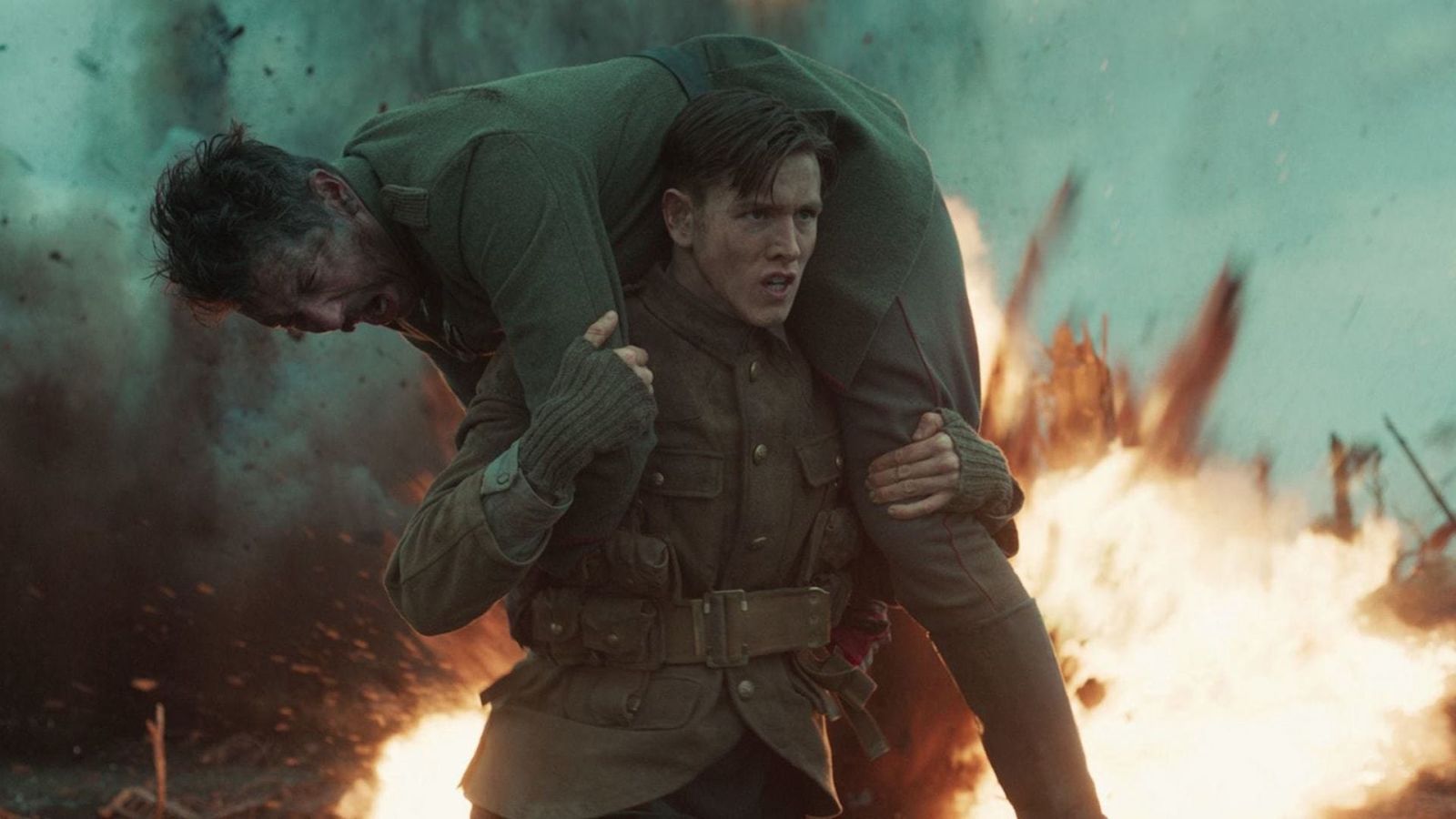 There are two lengthy featurettes totaling a scale-tipping 131 minutes of content. No Man’s Land goes into that knife battle sequence I just mentioned, showing how it was storyboarded, rehearsed, and brought to life. The second sequence throws out the acerbic humor of the movies for what can only be described as a gut check. Director Matthew Vaughn is a huge supporter of two veteran’s groups – The Royal British Legion, and Help for Heroes. These U.K.-based organizations help those of us who return from war with the need for a helping hand. Employment, recovery, special prosthetics, counseling, and more are offered, and this featurette showcases how those veterans are made whole with their help.

The King’s Man as a film celebrates the beginnings of an organization we’ve gotten to know in the last two films. It suffers a little bit of the “middle child” syndrome, not necessarily capitalizing on the strengths of either, but managing to do enough to be an enjoyable film. It’s a more restrained writing team, combined with the raunchy humor we’ve come to expect. What this film also provides, however, is a bit of a temper on Vaughn. The King’s Man is a film with a bit more restraint than The Golden Circle, keeping the humor and writing in line with the first film, but proceeding at a more cautious pace. It’s worthy of your collection, and thankfully its success should give us some amazing adventures again in the future.

With strong presentation across the board, the home release of The King’s Man delivers a more restrained story, but one with a lot more focus. Vaugn brings history to life, and whether it’s your first watch at home, or if you caught it in the theater, this Blu-Ray’s slow burn won’t disappoint.

Ron Burke is the Editor in Chief for Gaming Trend. Currently living in Fort Worth, Texas, Ron is an old-school gamer who enjoys CRPGs, action/adventure, platformers, music games, and has recently gotten into tabletop gaming. Ron is also a fourth degree black belt, with a Master's rank in Matsumura Seito Shōrin-ryū, Moo Duk Kwan Tang Soo Do, Universal Tang Soo Do Alliance, and International Tang Soo Do Federation. He also holds ranks in several other styles in his search to be a well-rounded fighter. Ron has been married to Gaming Trend Editor, Laura Burke, for 21 years. They have three dogs - Pazuzu (Irish Terrier), Atë, and Calliope (both Australian Kelpie/Pit Bull mixes).
Related Articles: The King's Man
Share
Tweet
Share
Submit