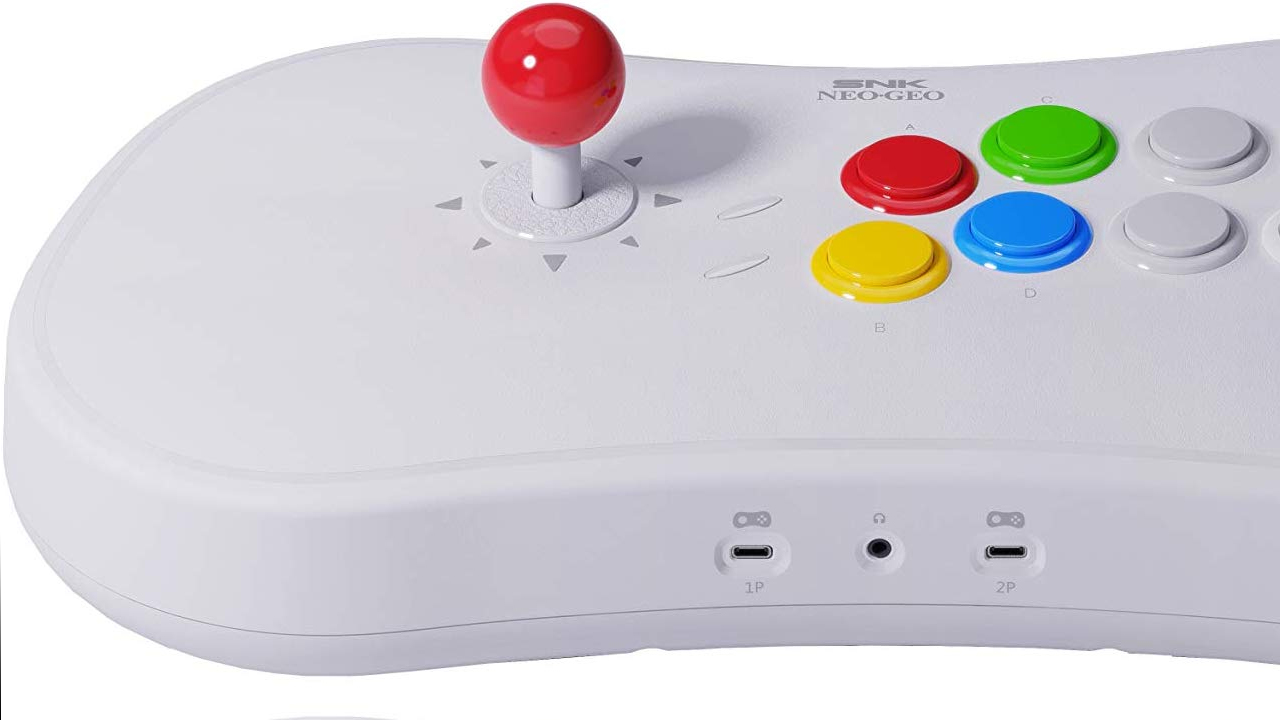 While I am an old-school gamer, I also grew up poor. My single mom couldn’t afford the latest game consoles, so I leaned on places like Blockbuster to rent them for a weekend here and there. Unfortunately, the Neo Geo was always just out of reach, leaving me dropping buckets of quarters into arcade machines to play games like Fatal Fury, Samurai Shodown, Art of Fighting, and King of Fighters. It’s time to relive my childhood.

The Neo Geo Arcade Stick Pro (hereafter NGASP) ships with 20 games preloaded, no carts required. Before we unpack and dig in, here’s that list:

If you are a fighting fan, this is an incredible list. In fact, games like Garou: Mark of the Wolves, The Last Blade 2, and Samurai Shodown II being some of my absolute favorites of all times. The thing that surprises me here is the complete absence of Metal Slug, Blazing Slug, Puzzle Bobble, SNK vs. Capcom: SVC Chaos, and Magician Lord. Those games helped define the console, and I know I’ve personally spent entirely too much money on each of them in the arcade. This makes the NGASP more of a fighting stick than an arcade stick. That said, this list truly is the who’s who of awesome 2D fighting games, so I can’t complain too loudly.

Unpacking the box, the system is entirely self-contained. Immediately I noticed that the device is sturdy and well-weighted — it should stay put when the fighting gets frenetic. The joystick is clicky and smooth, not quite Seimitsu quality, but feels close. The eight face buttons are laid out with a slight offset to A and B, like you’d find in an arcade cabinet. They have a throw depth of just a few millimeters, which is important for fighting games where milliseconds matter. Again, not quite Sanwa, but good enough.

On the rear of the device are two USB-C connectors for Neo Geo gamepads, for those moments where you’d like to play multiplayer, but don’t have a second stick. In-between them lies an audio jack, so you can play the included games quietly, though the noise from the sticks and buttons might wake up the house anyway. On the front lies a USB port, an HDMI connector, and another USB-C port — this time used for power. The right side of the stick has all the control buttons for the system, including your start, select, options, and even a turbo button. One toggle switch lets you switch between joystick mode and console mode, which allows you to use the system on your PC, or as a standalone. The other toggle is labeled 1, 2, and 3. This one lets you toggle between using it with the Neo Geo Mini (with an included adapter and cable), though I can’t tell you what the other toggles do, and the instructions are less than helpful. That said, using it with a PC means opening up your entire Steam library to the world of better fighting game controls, which is a welcome treat. 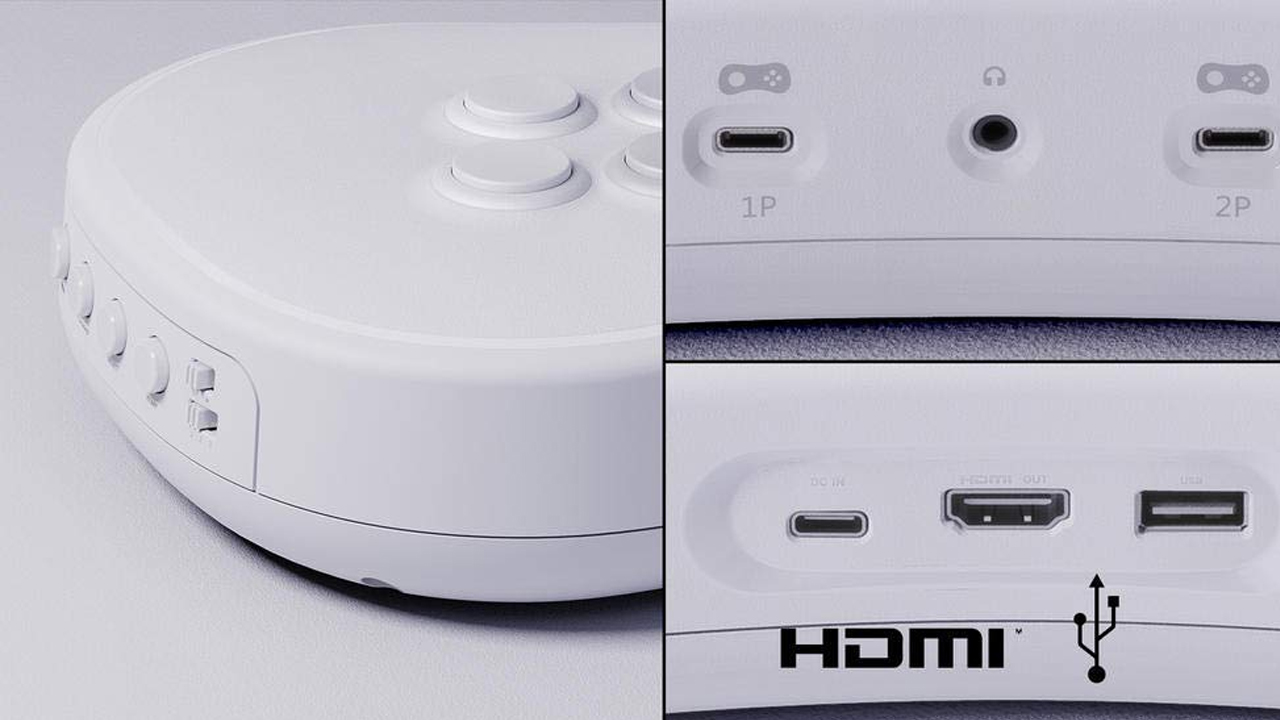 The ports on the stick lets the arcade stick pro operate as PC controller, or self-contained console.

For what it’s worth, I took a screwdriver to the NGASP and I’m happy to report that, if you are brave enough and have the skills, you can swap out the buttons and stick for Seimitsu and Sanwa, if you are inclined. For the average person, however, I’m gonna say stick with what’s here.

With the system plugged into my TV, I was happy to see that SNK has given us a few filter options. You can use a smoothing filter (the default), or three different scanline options, approximating the original look of the game on an LCD screen. If you are a purist, these are here for you. Also similar to the original release, everything runs at 720p — it makes the games look precisely as they did during their mid to late 90s release, and it’s a welcome upgrade over the Neo Geo Mini’s display. 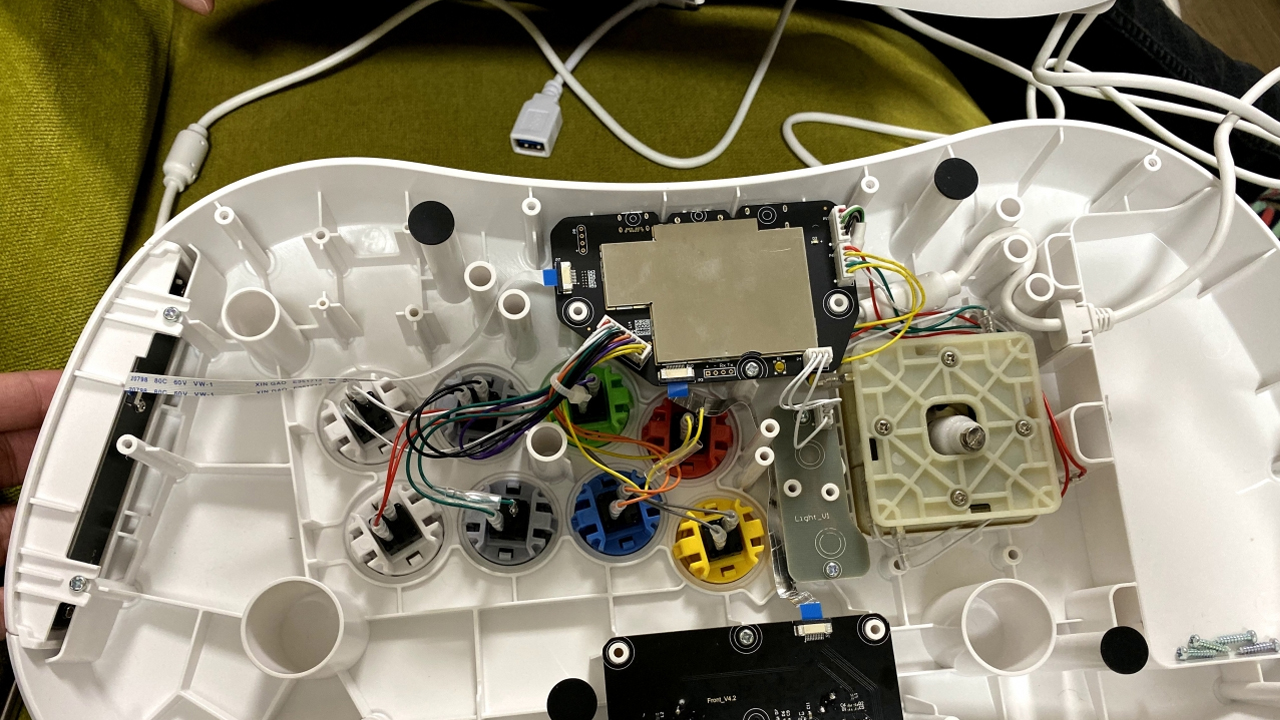 Credit to Redditor hugs_n_giggles for a cleaner inside shot than I took.  Simple to swap parts.

Truthfully, my only real complaint with the Neo Geo Arcade Stick Pro is that the focus has been 100% on fighting games, eschewing some of the amazing games that defined the console. I’d have liked to see Metal Slug, Blazing Star, Puzzle Bobble, and Magician Lord, as examples. Other mini console releases have celebrated a wide variety of the system’s back catalog, but here it’s just the fighting games, which may limit the audience on this device. Rumor has it that there are some additional games hidden, but I’m not sure why SNK would keep these under wraps — now’s the time to stand out.

I did run into one issue with the NGASP. I plugged in the HDMI cable to my TV and the audio began to snap and pop periodically. While I had used that HDMI cable before, it seemed to disagree with the controller. Swapping it for a nice 4K-capable high quality cable (mind you, to display games in 720p), the popping stopped, but I found all of that a little odd.

Focused on fighting games, the Neo Geo Arcade Stick Pro packs 20 of the best fighting games SNK has ever made into one convenient package. With support to double as a PC controller, the Neo Geo Arcade Stick Pro is a worthy successor -- I just wish they’d have packed in classics like Metal Slug, Puzzle Bobble, or Magician Lord to make it the ultimate package.

Ron Burke is the Editor in Chief for Gaming Trend. Currently living in Fort Worth, Texas, Ron is an old-school gamer who enjoys CRPGs, action/adventure, platformers, music games, and has recently gotten into tabletop gaming. Ron is also a fourth degree black belt, with a Master's rank in Matsumura Seito Shōrin-ryū, Moo Duk Kwan Tang Soo Do, Universal Tang Soo Do Alliance, and International Tang Soo Do Federation. He also holds ranks in several other styles in his search to be a well-rounded fighter. Ron has been married to Gaming Trend Editor, Laura Burke, for 21 years. They have three dogs - Pazuzu (Irish Terrier), Atë, and Calliope (both Australian Kelpie/Pit Bull mixes).
Related Articles: Hardware, SNK NEOGEO Arcade Stick Pro
Share
Tweet
Share
Submit