The “killing game” subgenre of adventure games has a relatively small yet dedicated fanbase. Games like Danganronpa and Zero Escape ignited a passion for these situations and characters that has resulted in sequels, anime adaptations, and even original fan games like Your Turn to Die. These games focus on an ever dwindling cast of characters as they try to survive a twisted game of betrayal, however none so far have tried to tackle this particular idea: what if everyone just left? Enter World’s End Club, from the original creators of Danganronpa and Zero Escape.

The Go-Getters Club is a group of eleven middle school kids residing in Tokyo in 1995. When on a field trip to Kagoshima, their bush suddenly crashes when a meteor falls from the sky. They awaken in a strange, underwater theme park where a clownish robot named Pielope forces them to play a Game of Fate; a last man standing game in which each participant has an hour to find out and complete their assigned task or die. You play as Reycho, a silent protagonist who looks straight out of EarthBound. As the other kids are slowly picked off, you win the game and have the choice of escaping or opening the robot where the losers were supposedly digested. Obviously, you open the robot to find the rest of the club is perfectly fine. After defeating Pielope, the theme park begins to flood and Reycho discovers he has a superpower that allows him to lift and throw objects with great force. Using this power, he knocks a submarine decoration off the ceiling, the kids hop in, and everyone makes it to shore only to find that they’re somehow far from home in southern Japan with no people in sight. 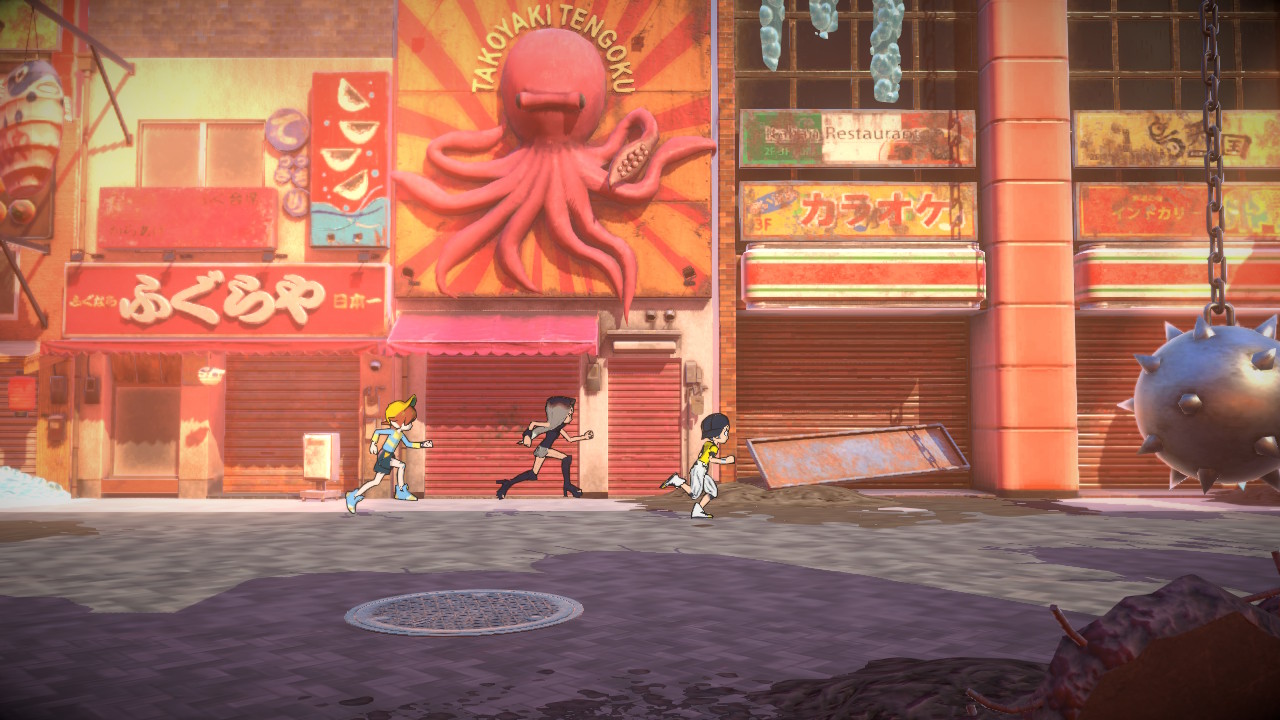 All that was just the opening of the game, while the rest of the experience has you trek cross country back home to Tokyo and discover what happened to the world while you were unconscious. I don’t want to spoil anything further, because the story and characters are the best part of World’s End Club. It can be a bit slow at times, but the various twists and turns you discover as you platform and make choices will keep you hooked to the end. The cast may seem big at first, but each of them get their time to shine, usually around when they discover their own superpowers. If you’ve liked other games in this sub-genre, you’ll definitely like this one.

While most of the game’s runtime is spent on listening to dialogue, the rest of the experience is much less enjoyable. Let’s back up a bit though, on the map, the game is split into three distinct event types: Story, Act, and Camp. Story sections are fairly self explanatory, you simply watch what happens (don’t use the auto dialogue advance feature, it cuts off lines constantly). Camp levels are very similar, but instead of simply watching you get to speak with everyone in the group individually to get their perspective on things. Acts are where the entirety of the non-visual novel gameplay lies and they’re, well, rough to say the least. The game was originally released on mobile devices, and you can really tell with how it controls. It’s somehow both stiff and unwieldy, and distinctly not fun. The idea is to use whichever club member your controlling’s power to solve puzzles and progress through the stage, but even overlooking the controls these “puzzles” are dead simple. 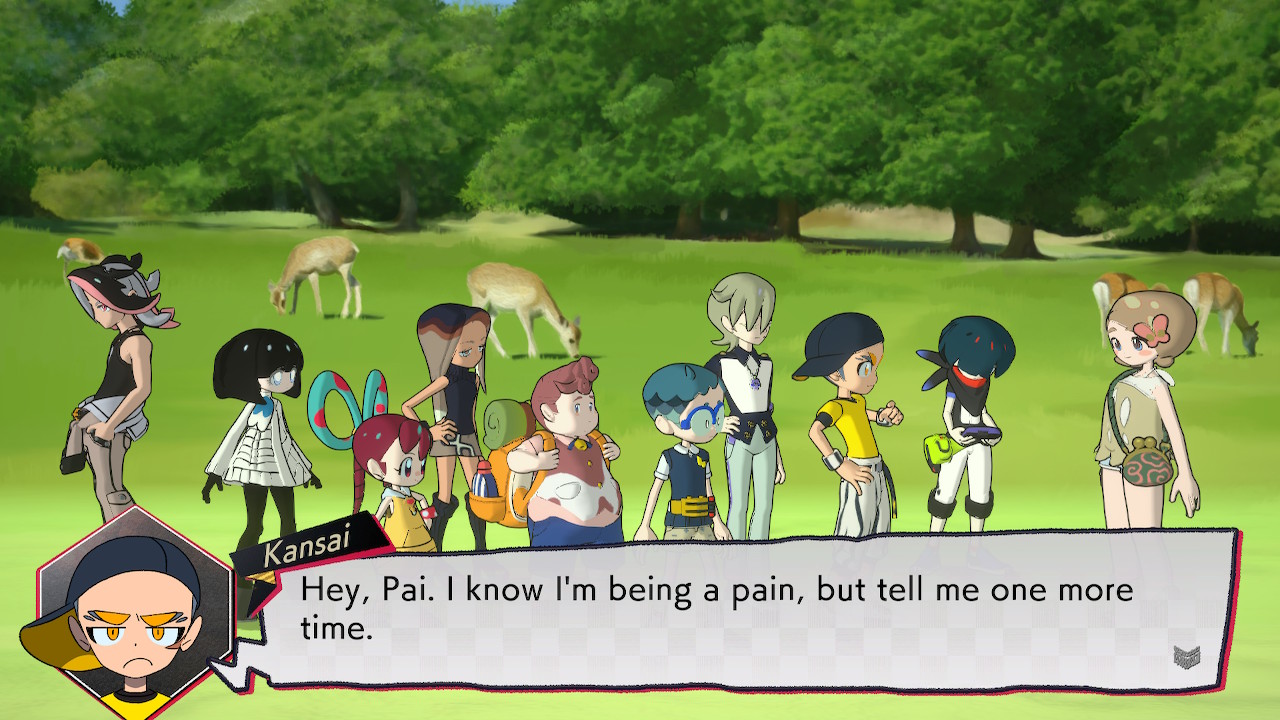 Speaking of dead, you’ll die a lot in these segments. Not because you made a mistake or couldn’t figure something out, but because of the terrible controls and level design. While a lot of the powers can be used simply by pressing A, some of them have a limited time of use for whatever reason. Once this runs out, you’ll be stunned for a few seconds and be killed by whatever obstacle you’re contending with. That’s not an “if”, it will kill you. The closest comparison for the gameplay here I could make is with games like Out of This World — you have to already know what’s going to happen and execute a specific set of actions perfectly. Where it differs with that game though is the randomness. For example, in a boss fight you’ll never know what attack the boss is going to do next, so you essentially have to just get lucky to beat them. If these sections were simply removed from the game, it would be much better off.

While you’re suffering through the acts, you’ll be listening to some great music and appreciating the game’s colorful art style. The soundtrack is thoroughly enjoyable with an eclectic mix of tunes from all genres and is definitely worth listening to on its own. The visuals can be a bit of a mixed bag, the backgrounds in certain scenes are literally just a picture of a field or something with no extra effort to make it fit, but the character models are appealing. They’ve got some very nice cell shading that makes them pop, and to top it off the designs are unique and colorful. This makes the game certainly worth looking at, but actually playing it can be a chore.

World’s End Club is an excellent story with some abysmal platforming tying it together. While story sections greatly outnumber gameplay sections, these stand out as a sore spot that may put off some players.

David is the kind of person to wear his heart on his sleeve. He can find positives in anything, like this is a person who loved Star Fox Zero to death. You’ll see him playing all kinds of games: AAAs, Indies, game jam games, games of all genres, and writing about them! Here. On this website. When not writing or playing games, you can find David making music, games, or enjoying a good book. David’s favorite games include NieR: Automata, Mother 3, and Gravity Rush.
Related Articles: Indies, World's End Club
Share
Tweet
Share
Submit